The war on poverty – did poverty win?

50 years ago, America was optimistic about ending poverty. What went wrong? 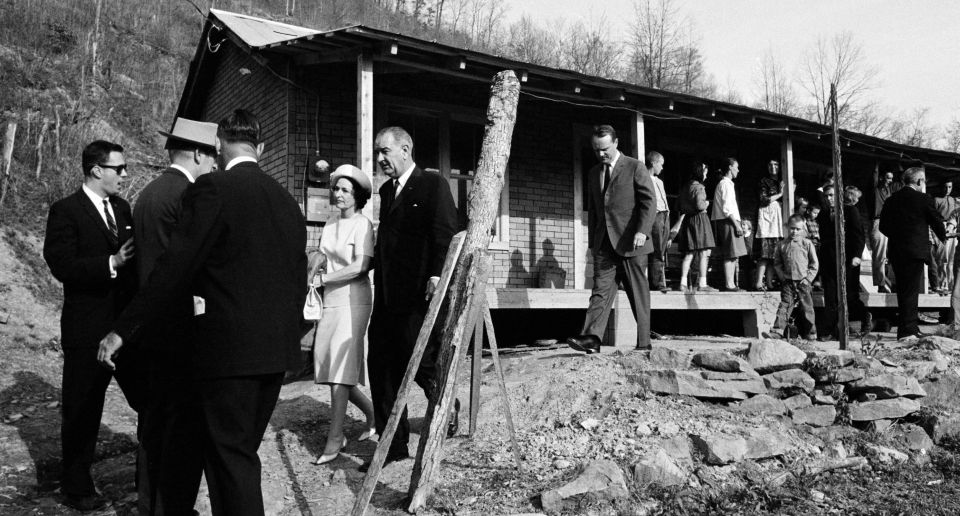 ‘Because it is right, because it is wise and because, for the first time in our history, it is possible to conquer poverty…’ So began US President Lyndon Johnson’s special message to the 88th Congress of the United States in March 1964. Reading this together with his State of the Union message from January of the same year, what stands out is Johnson’s ambition. Johnson proposed nothing less than the eradication of poverty and racial oppression. The twin initiatives of the Economic Opportunity Act and the Civil Rights Act would, he argued, ‘prove the success of our system’, and ‘disprove those cynics and critics at home and abroad who question our purpose and confidence’. Fifty years later, it is hard to imagine anyone with the audacity to raise the possibility of ending poverty let alone to declare war on it. Not only does poverty persist in America today, but it is arguably more widespread.

According to income figures provided by the US Census Bureau, nearly half of Americans are poor or near poor. But this doesn’t tell the whole story. The actual numbers may be even greater because income figures do not take into account subsidies like housing assistance, tax credits, healthcare costs and social security benefits. These programmes, which are not classed as welfare, keep a further 40million people above the poverty line. The bottom line is that a substantial number of people do not earn enough to survive independently.

The price tag for welfare spending is hotly debated, but if we add together the cost of all 80-plus means-tested assistance programmes, welfare, food stamps, earned income tax credits, healthcare etc, the figure is a staggering $1.3 trillion. Were we to include the money spent by individual states, the number would be even higher. Add to this the $316 billion given away annually by the non-profit sector (now the fastest growing part of the US economy) and it’s clear that, at least in terms of the way American society mobilises its resources, the struggle against poverty is surely on a war footing.

Perhaps inevitably, the anniversary of the war on poverty has provoked soul-searching and dismay across the political spectrum. Did it fail or was it overwhelmed? Have anti-poverty programmes helped or just made things worse? Among the concerns being debated are the decline of marriage, the rise of single-parent households, and the rise of a low-wage economy. The result is a highly technical discussion about policy so dominated by statistics, correlations, outcomes and ‘return on investment’ that it is in danger of disappearing down the rabbit hole altogether.

If we really want to understand the legacy of Johnson’s ‘war on poverty’ and get to grips with the problems we face today, it is important to recognise how poverty and our understanding of it has changed over the past 50 years. Without this perspective, we’re left with little more than disparate discussions of individual policy measures, each one a single tree in a vast and overgrown forest.

Two major changes have taken place since the 1960s. The first is that anti-poverty initiatives have ceased to be about integrating marginalised people into the economy and have become more about limiting the damage caused by the struggles of the economy. The second is that our understanding of poverty has changed. In Johnson’s day it was seen as a social problem with economic and historical causes; today, it’s seen as a natural, quasi-biological problem, involving genetics and brain development.

Perhaps one reason why Johnson’s address sounds so remarkable to contemporary ears is that the problem of poverty appeared infinitely more manageable at the dawn of the 1960s. At that time, America seemed poised on the brink of a new era in which poverty might be ‘mopped up’ and the nation could focus its energy on ‘fighting for individual dignity, identity, and fulfillment in an affluent mass society’ (1). Because the economy was still booming in the wake of the Second World War, there seemed no reason to think that prosperity and political liberalisation would not continue indefinitely. Indeed, in January 1960, the Los Angeles Times suggested that ‘the decade of the 1960s should be the most dynamic in the world’s modern history’ (2).

In the context of this unbounded optimism, the objectives of the war on poverty seemed straightforward and achievable. The first was to provide a safety net for those members of society who, for whatever reason, be it age or health, could not be economically productive. The second was to integrate able-bodied but disadvantaged people into the workforce by ameliorating past injustices such as inadequate education.

On the first count, the war on poverty was remarkably successful, substantially reducing the poverty rate for senior citizens and children in an enduring way. But its second objective, integrating marginalised people into the workforce, fell flat. Its failure would come to be intimately bound up with the politics of race, both because poverty affected African Americans disproportionately and because whites came to see African Americans as the embodiment of the nation’s economic and moral decline. By the mid-1960s, popular attitudes to the war on poverty had changed. Political unrest, race riots and the assassination of Martin Luther King all contributed to a mood of pessimism, and the Vietnam War divided the country. Johnson’s anti-poverty programmes lost much of their funding to the Vietnam War effort, and the bold promise to conquer poverty collapsed.

Two landmark reports – the Moynihan Report of 1965 and the Coleman Report of 1966 – seemed to confirm that anti-poverty measures were destined to fail. The reports suggested that, all things being equal, African Americans were not culturally equipped to take advantage of new opportunities, largely because the ‘tangled pathology’ of negro family life (large numbers of single mothers, children born out of marriage and high divorce rates) did not prepare them for success.

In retrospect, the problems of social disintegration and the decline of the family in African-American communities were largely a consequence of the pressures of poverty and the breakdown of community. Broken families were not the norm among African Americans in the South but they became endemic in the northern cities where African Americans found themselves socially isolated at the sharp end of urban decline and deindustrialisation. Their experience foreshadowed that of white America today, where single-parent households and births outside of marriage are becoming the norm. Nevertheless, the idea that the poor were somehow culturally unfit shifted the terms of the discussion away from the system and refocused it on the poor themselves.

Ironically, the welfarist infrastructure set up during the war on poverty made realising its second objective – integrating the marginalised into the workforce – much more difficult. It became nearly impossible to make the transition from welfare to work without suffering serious financial hardship, which created a perverse incentive for people to stay dependent. As jobs vanished in the decaying industrial centres of the nation so did the structure, discipline and sense of purpose that comes with work. Entire communities succumbed to the deepening sense of demoralisation that comes with long-term economic marginalisation.

Urban decline intensified as factories closed and whites moved to the suburbs to pursue white-collar jobs and to escape African Americans who they despised as the harbingers of decay. The population of urban centres plummeted in the 1970s. New York City alone lost 824,000 people, a number close to the then population of San Francisco. Elsewhere, Detroit lost 40 per cent of its population. Crime rates soared and joblessness becomes a permanent feature of life in the inner cities. By the early 1980s, President Ronald Reagan could quip: ‘We waged a war on poverty: poverty won.’

The moral collapse of the war on poverty prompted attempts to find alternative explanations for the origins of poverty. With the notable exception of William Julius Wilson, whose 1978 book, The Truly Disadvantaged, sought to contextualise the problems of poor black urban neighbourhoods within the context of economic and social changes, many theorists writing and working around the same time turned their attention to the effects of policy (Losing Ground, by Charles Murray) or to the lives of the poor themselves (Meaningful Differences, by Betty Hart and Todd Risley).

Murray would eventually take the discussion of poverty entirely out of a social context and place it firmly in the realm of what we now call ‘behavioural economics’. In The Bell Curve, which he wrote with Harvard psychologist Richard J Herrnstein, Murray used data from the the Armed Forces Qualification Test (AFQT), which is given to all new recruits, to show that IQ was the biggest indicator of future poverty. Therefore, Murray and Herrnstein argued, welfare policy was, in effect, encouraging the creation of a permanent substrata of intellectually inferior people incapable of survival without aid from the state. Though the book was widely criticised as racist, since it implied that poor African Americans were necessarily stupid, its approach – data-driven and deterministic – would come to dominate the contemporary understanding of poverty.

The first instinct of policymakers today is to focus not on jobs or programmes that might make the poor self-sufficient, but on tinkering with their living situations in the hope of improving ‘outcomes’. The University of Chicago economist and Nobel Laureate, James Heckman, argues (using much of the same data as Murray and Herrnstein) that early childhood education builds non-cognitive skills and yields better outcomes, thus creating a higher return on investment. Republican Senator Marco Rubio uses data showing a high correlation between poverty and single parenthood to argue that marriage is the cure for poverty. Advocates like the Harvard Center on the Developing Child argue that poverty is the product of underdeveloped brain architecture, and poor gene expression due to ‘toxic stress’ in early childhood. In other words, the persistence and expansion of poverty into the very heart of the United States is not a systemic problem but an individual one, a series of bad outcomes that might be avoided through early interventions, encouraging marriage, or through the promotion of desirable behaviours such as breastfeeding, reading to children and so on.

Fifty years on, America’s unofficial war on poverty has become so bogged down in the minutae of inputs and outcomes that it has lost sight of the big picture. People are somewhat limited by their opportunities and experiences, but focusing on individuals loses sight of the fact that the American economy cannot reliably provide a stable livelihood for people in the mainstream, let alone those on its margins. Until we recognise this situation for what it is, we will not be able to address the real problem of poverty, namely that the impoverished cannot become productive and self-sufficient in what is fast becoming a moribund economy.

The sad truth is many of today’s myopically focused anti-poverty initiatives have become ends-in-themselves, monopolising massive amounts of resources that might otherwise go into the kind of innovative and radical restructuring necessary to create a system robust enough to accommodate everyone. Fifty years on, America’s war on poverty has become a war with itself.