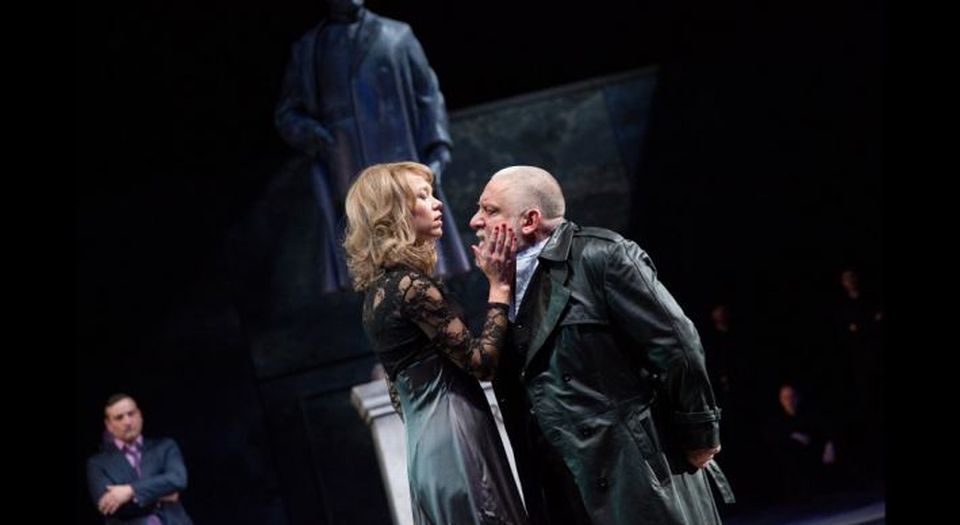 The great frustration with Sam Mendes’ ceremonious production of Shakespeare’s pagan tragedy is that it shapes up like it’s got something interesting to say about kingship and totalitarianism. It also promises much because it features one of the National Theatre’s most revered actors in the title role – Simon Russell Beale. And yet, much like the sexed-up nationalism in Mendes’ Bond film Skyfall this is a procession of big, empty theatrical effects.

The idea seems to be to offer a modern rendition of the play in which the old man, dividing his kingdom between his daughters, is exposed as suffering from the sort of infantile narcissism that we are supposed to associate with history’s most diabolical despots. The programme name-checks Stalin, Gaddafi, Tito and Ceausescu for comparison. Anthony Ward’s Orwellian design meanwhile mirrors the elemental brutality of Soviet architecture – including a lunking bronze statue of Russell Beale as Lear in a trench coat on a plinth in an empty piazza.

To this is added hefty doses of macho militarism. Jet planes are heard screeching across the auditorium and the occasional Chinook helicopter throbs past. Down on the ground, just like today’s political apparatchiks, Lear’s courtiers wear Savile Row suits ranging from an Ozwald Boateng to the conservative pinstripe and pocket hankies you’d expect to find in Tory HQ. Lear himself meanwhile keeps a private militia who roam about chanting rugby songs and, at one point, toss a whole deer on to their banqueting table. And, to give it yet more modern-day relevancy, when it comes to the interrogation of Lear’s ally Gloucester after the state has fallen into civil war, we get a waterboarding scene.

This is all well and good on paper but in reality these are all rote and even glib motifs. Lear’s militia for example are little more than spear carriers. Naturally they wear blue serge uniforms not cotton togas and they carry assault rifles not spears. But their role is exactly the same as the old-school stage extra: rhetorical and ceremonial. Even in the play’s most gut-wrenching scenes they are just part of the furniture – there to make the spectacle seem bigger than it really is. They are as decorative as the procession of black umbrellas that denote an impromptu funeral late on (cliché alert: it doesn’t always rain at funerals).

Some of the other anomalies and anachronisms are typical and inevitable – we are after all accustomed to switch-blades being called swords in Shakespeare plays. You can even allow the use of the Guantanamo-style hand-and-foot cuffs as ‘stocks’. But having the blinded Gloucester jogging up steps for one of his exits is an unfortunate lapse of realism, while the final sword fight between opposing brothers Edmund and Edgar is too glibly dispensed with as a dramatic inconvenience.

This kind of tinkering needn’t matter, but Mendes also has Lear bludgeon his Fool to death in a fit of madness during the Bedlam scene. This is an outright error. There is no precedent for this in the text and it immediately robs Lear of sympathy. It leaves you wondering why no one tries to stop him or even passes comment. The event marks Lear as a dangerous psychiatric case, not a dismal old man being brutally stripped of his regal status and psychological certainties. Russell Beale glances at his victim on the way out but otherwise it’s as though it never happened.

Unless you are a Shakespeare purist, Mendes can do as he pleases with the play. It is, however, hard to know what Shakespeare purism looks like in an age that keenly urges cross-gender and colour-blind casting – as in the Donmar Warehouse’s all-female Julius Caesar and Adrian Lester’s Henry V. The trouble is that Mendes’ interventions lack any social and political rationale and amount merely to motiveless sensationalism. Mendes certainly has no quarrel with the play – he’s not trying to challenge or confront Shakespeare in any way. Rather he practises the very pomp that Shakespeare censures. Nor is there any indication of probing the differences between Shakespeare’s world and our own. Rather this is an act of obeisance: a pilgrimage bearing Russell Beale’s performance as its offering.

Thankfully it is a performance with plenty of interest. Russell Beale starts out giving his favoured daughter Cordelia the notorious Alex Ferguson hair-dryer treatment when she fails to grovel on cue. Thereafter he prowls the Olivier stage in a state of lonely, troubled denial. But with his teddy-bear physique and troubled conscience he is hardly convincing as a great dictator. Rather he is more like David Moyes at Manchester United trying to live up to a despotic legacy. His best bits almost inevitably come when the bombast is behind him and he becomes a sweet old man ranting about litanies of depravity in a tabloid newspaper.

Thanks to Mendes’ directorial kudos, Russell Beale is surrounded by some very serious actors all of whom (like David Moyes’ squad today) are playing very much within themselves. Anna Maxwell Martin is a serious and powerful actress, but her Regan, wearing fur coats indoors and negligees outdoors, is prone to growling and shouting. Before he gets bludgeoned to death, Adrian Scarborough’s Fool mugs it up as a music-hall variety act and the normally ebullient Sam Troughton is curiously subdued as the scheming bastard Edmund. Tom Brooke as his brother Edgar makes a promising start as an idle roué, but is soon sucked into the role’s usual pious logic. Even Stanley Townsend as Lear’s faithful servant is so much bigger and warmer than his master that he completely overshadows him. And at least two grisly deaths on stage provoke titters.

Amid thunder and lightning with Russell Beale ascending a priapic plank that rises from the centre of the stage for him to rail at the cosmos, Mendes’ production is, in the end, a rite of high-minded melodrama. It offers neither a harrowing insight into totalitarianism, nor a compelling account of the play’s existential themes of man, nature and nothingness. You get the sense that it is being done simply because it is there, because it’s what’s always done and because it’s Russell Beale’s turn. Perhaps we should, as is sometimes suggested, take a break from Shakespeare and stop using him as some kind of all-purpose oracle. Unless there is good reason for reviving him, maybe we should leave the Bard alone.

Patrick Marmion is a freelance journalist, playwright, founder of Soapbox debating forum and a part-time tutor at the University of Kent. Visit his website here:www.patrickmarmion.co.uk.