Lord Rennard and the cannibalisation of the Lib Dems

The focus on Rennard’s behaviour shows how unhinged politics has become. 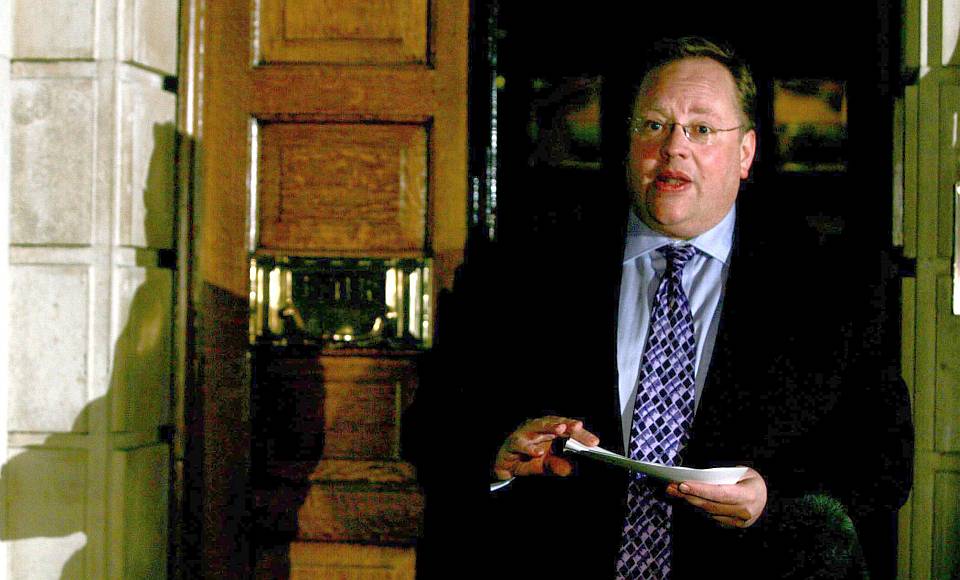 There are so many questions one could ask about the Lord Rennard affair. Like, how on earth did a case of bad, clumsy flirting come to dominate the political and media agenda in a country undergoing recession and facing numerous other serious problems? Lord Rennard, a Lib Dem peer accused of sexually harassing some of his party colleagues, appears on the front page of every British broadsheet this morning, his well-fed face staring out at upmarket newspaper buyers. Which is extraordinary not only because I am pretty certain there are bigger political issues we should be worrying our brains with than a lord’s allegedly letching hands, but also because the nature of the accusations against him are hardly Caligulian.

According to the Guardian, Lord Rennard, who was once chief executive of the Lib Dems, faces accusations from four women. They include ‘plonking himself’ between two women and ‘moving his hands down our backs’; rubbing the outside of a woman’s leg and saying to her, ‘Why don’t we get a couple more drinks sent up to my room, where we can continue this conversation?’; and touching a woman’s knee ‘two or three times’.

These are just crap come-ons from a bloke who seems unable to read a woman’s signals. It is one thing for something like the Profumo affair, which involved actual sex and some Soviets, to get the political and media classes’ pulses racing. But for the alleged slightly creepy chat-up techniques of one lord to take political centre stage is just bonkers. It suggests we live in such prudish times that any kind of behaviour can become a sex scandal (regardless of a lack of sex), and in such a politically small era that the alleged goings-on between a handful of political types most people have never heard of can elbow aside all the other issues we are either not debating or are debating in increasingly shallow terms.

Another question to ask about the Rennard affair is how bad flirting came to be redefined as ‘sexual harassment’, with the lord’s alleged activities being held up as evidence of something called ‘low-level sexism’ in the modern political sphere. That something as mundane as ‘plonking’ oneself between two women and touching their backs can be talked about as harassment, even as misogyny, shows how far those terms have been denuded of their meaning and impact. The handwringing over Lord Rennard’s very minor alleged wrongdoings speaks to the way in which everyday forms of human behaviour, from office banter to sexual invitations, are now being redefined as ‘abuse’ that must be stamped out.

Human relations and interaction are now treated as toxic things, driven by the most base motives and potentially having terrible consequences. In some workplaces, speech codes and sexual-harassment codes now govern pretty much all chit chat, even the stuff that was once considered beyond the purview of bosses – flirtations in the workplace canteen or jokeyness among staff members. One expert advises that ‘non-safe topics [for discussion at work] include hair, shoes and cleavages’. But if you are hell-bent on complimenting a colleague on any of those attributes – what kind of crazy person are you?! – then you should apparently do so from a ‘respectable distance’. Those cheering the hauling of Lord Rennard on to the front pages of the papers as a symbol of the new ‘low-level sexual harassment’ should ask who benefits from this redefinition of normal human activity as harassment. It certainly isn’t women, who come to be treated as fragile creatures ill-suited to the rough workplace – an argument I’m sure feminists might once have challenged.

And the third, probably most important question about the Rennard affair is how it came to rip apart the Lib Dems. This is the most striking thing about this whole debacle: the extent to which it is an entirely internally generated Lib Dem crisis, involving Lib Dem women making accusations against a Lib Dem lord and stirring up heated media interest in the Lib Dems’ ethics and attitudes. Yes, various political actors and media commentators who don’t like the Lib Dems are milking the Rennard affair for all it is worth, but it was made into an issue, into a scandal, into the focus of national media prurience, by Lib Dem people themselves. One of the accusers is a former special adviser to Nick Clegg, the party’s leader, and now Clegg is under pressure from sections of his party to punish Rennard, and from other sections to forgive him, while Rennard himself is threatening to sue his party for unleashing a ‘lynch mob mentality’ against him and suspending him without sufficient justification. Has a political party ever so publicly and thoroughly cannibalised itself as the Lib Dems currently are?

What the Rennard affair points to is the inherent instability and porousness of political parties in our post-ideological, principle-free age. Of course, the Lib Dems have for a long time prided themselves on being bereft of ideology, of being neither left or right, Labour or Tory, but instead a soft middle way for the middle classes and students who couldn’t bring themselves to cast their ballots for either of the two tribes of mainstream politics. But the Lib Dems nonetheless had a sense of who they were, a sense of mission, even if it was simply that they weren’t The Other Two.

Today, neither the Lib Dems nor any of the other main parties in Britain have any of that old binding, connective glue of an overarching political outlook or a grassroots constituency that they might engage with and win moral authority from. Increasingly cut off from the public and run more by PR men than traditional politicians, and increasingly cut off from their own political pasts and ideological belief systems, too, all the parties in Britain have become changeable, unsteady, open to the kind of personality rivalry and backstabbing which in the past would have been suppressed by the greater needs of the party and its mission. It’s not just the Lib Dems. Look at how Labour tore itself up during the Blair / Brown spat, which had not an iota of ideological debate to it, but rather was an entirely personal and super-bitchy fallout between the then governing party’s two top men. Parties that stand for nothing and speak for no one, which lack a moral or political anchor, are susceptible to being rocked and even consumed by their own members’ and leaders’ petty personal differences or behaviour.

What we have in the Rennard affair is a perfect storm of the weaknesses and prejudices of the modern political class: the media’s appetite for scandal, however paltry the scandal might be, has combined with officialdom’s and feminists’ obsession with ‘low-level harassment’ in politics, work and just about everywhere, and both have crashed into the self-immolating instincts of parties that are no longer capable of holding a line or presenting a public front on any issue or event. Through salaciously stirring up the Rennard affair, the upper echelons of society are basically watching their own self-destructive tendencies play out on a media stage. And then they wonder why everyday people aren’t interested in party politics anymore.