Care about democracy? Then smash the EU

How the EU both feeds off and further inflames the crisis of democracy. 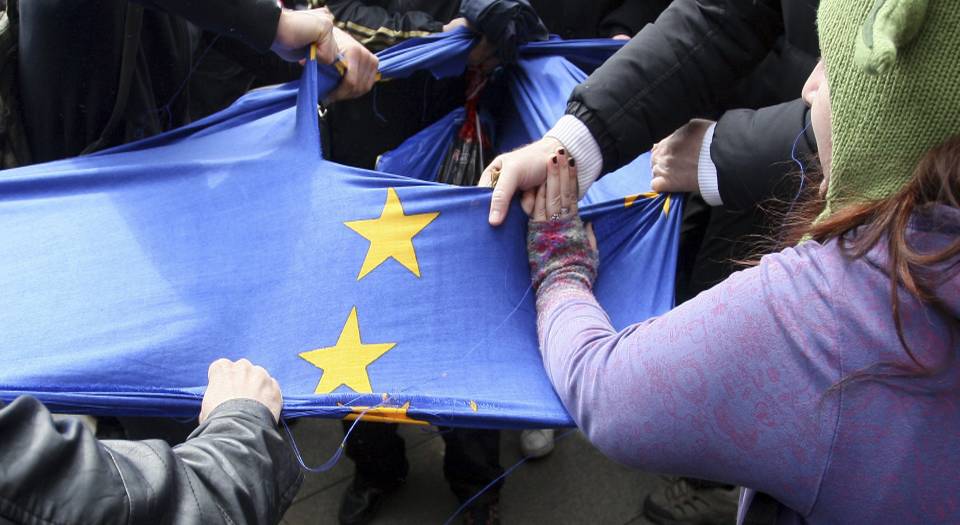 Did I fall asleep and wake up in the fifteenth century?

I ask because, according to news reports, the unelected lords of Britain’s second chamber are currently trying to prevent the British public from having a say on our relationship with unelected suits in Brussels. Enraged by Conservative prime minister David Cameron’s proposal that we should have an in/out referendum on Britain’s membership of the European Union in 2017, various lords have accused him of putting our nation’s fate in the hands of a ‘lottery’ in which much of the electorate, won over by ‘the daily war drums of the unyielding Europhobes’, will probably dumbly vote to leave the EU.

In short, one oligarchical sect – the well-fed lords who, outrageously, still get to moan about and rewrite laws being passed by politicians we the public actually elected – are seeking to erect a pleb-deflecting forcefield around another oligarchical sect: the cut-off officials of Brussels who issue edicts and write constitutions that impact on vast numbers of Europeans without ever bothering to ask us how we feel or what we want.

The mutual back-scratching of Britain’s unelected lords and Brussels’ unelected officialdom passed with remarkably little controversy. Very few seemed perturbed by the fact that 14 years into the twenty-first century not only does Britain still have an unelected second chamber, but we have one that is openly happy to try to prevent the little people – that’s us – from having the right to say whether we should stay part of an increasingly unaccountable politics-shaping institution in Brussels or break away from it.

Some of the lords’ comments on why a referendum would be a bad idea, in a debate on the House of Commons’ proposed legislation for said referendum, dripped with contempt for the public. Lord Kinnock, former leader of the UK Labour Party and now a European Commissioner, said an in/out referendum was a ‘lame’ idea that risked making Britain the hostage of ‘unyielding Europhobes’. That is, the public, being possessed of mushy, malleable minds, might be coaxed into doing something that Lord Kinnock disapproves of – leaving the EU – by the hysterical whisperings of ‘Europhobes’. Even his use of that term ‘Europhobia’ reveals a disdain for political outlooks that differ to his own: in his and other pro-EU people’s view, to be opposed to Brussels is to suffer from a phobia, an irrational fear.

Another lord said referendums are ‘alien’ to British culture and insisted that ‘parliament makes decisions, not the people’. Lord Mandelson, also a former EU commissioner, said: ‘We should be wary of putting our membership in the hands of a lottery in which we have no idea what factors, completely unrelated to Europe, will affect the outcome.’ How telling that aloof lords fret about democratic deliberation being a ‘lottery’ – that is, an unpredictable process over which they have no control and cannot determine ‘the outcome’, as Mandelson says. They seem not to realise that that is precisely the point of democracy – that it allows the public, not experts or elites or aristocrats, to determine what should be the focus and outcome of political life.

What these pro-EU lords want to do is insulate the institutions of the EU from public scrutiny, from public decision-making. This is the goal of pretty much every backer of the EU – to slap down talk of an in/out referendum on the basis that it hands authority over Britain’s relationship with Brussels to people who are apparently insufficiently enlightened and too prone to ‘phobias’ to be trusted with such a grave decision.

So a French observer laments the ‘growing hysteria’ over the EU here in Britain, where more and more politicians and their followers are ‘fanatically Europhobic’; apparently this makes a referendum a dangerous enterprise. Der Spiegel says Cameron has ‘succumbed to growing Europhobia’, cravenly bowing to those ‘half of all Britons [who] would vote in favour of withdrawing from the EU’. What is effectively being said here is that the British public is irrational – ‘phobic’ – and thus it is a great folly to ‘succumb’ to their level of thinking and certainly to grant them a say on the future of the EU. A writer for The European magazine complains of the British public’s ‘prejudices’ towards the EU, which apparently have been stirred up by ‘tabloid scare stories’, which means that a referendum could end with a British ‘retreat from the European project’. In short, we can’t have a referendum because the British public might give what lords, EU bureaucrats and Brussels-based thinkers consider to be the ‘wrong’ answer. A columnist for the Guardian was pretty explicit about why there must not be a referendum: because ‘I just don’t see how a referendum could be won [by] pro-Europeans’.

These arguments against a referendum are stunningly anti-democratic. They boil down to saying that a referendum is a bad idea because the masses might elect to do something that ‘we’ – small cliques of unelected but wise people – think is a bad thing. The masses would win, ‘we’ would lose. The tabloid-reading, scare-story-believing, unthinking phobics of the mob would get their way, while we better-educated folk, who are of course immune to populism, would lose something we consider very important: a relationship with ‘the European project’. This is a quite open demand to restrict democracy in order to prevent the exercise of public will against elite ideas and interests.

It is always like this when it comes to public votes on EU matters. When, in 2005, French and Dutch voters voted ‘No’ in a referendum on whether Europe should adopt a new Brussels-authored constitution, they were slammed by their betters for being dumb, ungrateful and wrong. The ‘No’ victory was a ‘triumph of ignorance’, said Lord Kinnock. Liberal Democrat MEP Andrew Duff said the opponents of the proposed constitution were ‘an odd bunch of racists, xenophobes, nationalists, communists, the disappointed centre left and the generally pissed off’. That is, Bad People. Duff spoke for many EU types when he wondered out loud if it was wise to ‘submit the EU constitution to a lottery of uncoordinated national plebiscites’. When, in 2008, Irish voters rejected the Lisbon Treaty, a rehashed version of the constitution rejected by the peoples of France and Holland, pro-EU commentators said they had been got at by ‘populist demagogues’, their minds ‘derailed by lies and disinformation’.

Again and again, the pro-EU lobby has branded the European demos as untrustworthy, believing we are consumed by prejudice and not nearly thoughtful enough to make a decision about something as serious as the future of the EU (one commentator said the Irish ‘No’ voters might have been confused by the ‘technocratic, near incomprehensible language’ of the Lisbon Treaty). Their instinct, therefore, is always to create a barrier between the plebs and Brussels bureaucrats, to protect the latter from being ruled on or dictated to by the former. Like monarchs of yesteryear, they live in constant fear of public opinion and so they rebrand such opinion as irrational, unfounded, racist, stupid, a din that officials in Brussels should not be forced to listen to.

The anti-referendum sentiment captures the key problem with the EU – that it is in essence a project designed to insulate national elites and political classes from the rough views of their electorates. Too often, right-wing commentators depict the EU as a conspiratorial enterprise dreamt up by power-crazed Germans and Frenchmen who long to tell all Europeans how curvy their bananas may be. In truth, the EU emanates from the crisis of legitimacy of all national governments in Europe, the powerful sense of disconnection from the public experienced by political classes everywhere from Britain to Italy to Poland, who bit by bit have sought refuge from their publics and from their crisis of authority in the new, far-removed institutions of Brussels. It is a clubbing together, not of the peoples of Europe, but of the elites of Europe seeking to escape their peoples. This is why all talk of granting national publics greater democratic authority over Brussels so freaks out those who back the EU project – because the EU project grew precisely out of the political elites’ sense of alienation from these national publics and their feeling of exhaustion with having to engage with or talk to us.

This means that the cosmopolitanism of the EU project is an entirely phoney one. The EU is built, not on the common interests and desire for cooperation of the peoples of Europe, but on the shared desires of the elites of Europe – mainly their desire to avoid as much as possible the testy, unpredictable ‘lottery’ of national democratic political life. spiked does not believe that Cameron’s in/out referendum will solve all the problems of democratic accountability in modern Europe, but we still want the referendum to go ahead. And we want people to vote ‘No’ in it. Because it is only through rejecting the phoney cosmopolitanism of the elite EU project that we can start to make the case for a properly united, properly open continent of Europe, in which both democracy and cross-border solidarity might genuinely flourish.