In 2014, we could do with some real rebel youths

2013 confirmed the emergence of the most conservative, conformist generation of young people in living memory. 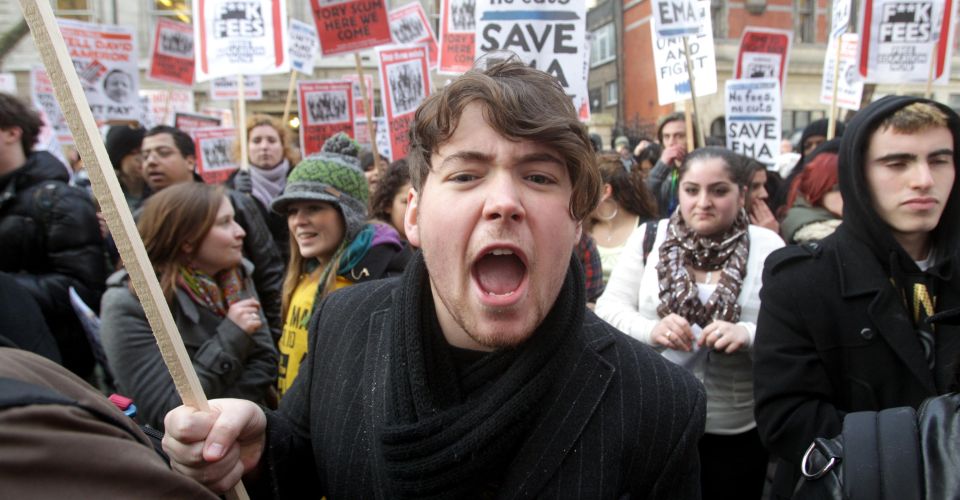 Going by what appears in newspapers, you could be forgiven for thinking Britain is witnessing the birth of the most wayward, radical, rebellious generation of young people ever. Whether it’s right-wing panicmongering over legal highs, teenage ‘extreme binge drinkers‘ and an epidemic of sexually transmitted infections (STIs), or claims from excitable leftist commentators about the student protests of 2010 ushering in a ‘new age of rebellion‘, you might think that today’s young people are some marauding hybrid of the Bolsheviks and the Happy Mondays: ‘Peace, land, bread, mephedrone, nookie!’

However, lift the lid on the tabloid hysteria and commentariat fawning and you get a different picture. Indeed, 2013 was the year when it became clear that today’s young people, my generation, are the most conformist, risk-averse and conservative in recent memory.

Boozed-up, drug-addled yoofs? It’s a myth. According to a recent study by the Health and Care Social Information Centre, only 43 per cent of 11- to 15-year-olds have tried alcohol, compared with 61 per cent 10 years ago. The number of young smokers has fallen, too. And only 17 per cent of teenagers admit to having tried drugs, marking a 10 per cent decrease since 2002.

Not only are kids refusing to experiment with what were once seen as rite-of-passage vices – they also actively think that flirting with such vices is morally wrong. As Fraser Nelson noted recently in the Spectator, young people are far less liberal about smoking and drugs than their parents, with only nine per cent of young people considering it acceptable to smoke cannabis, compared with 32 per cent of the older population.

As for the idea that young people are relentlessly shagging around, catching something itchy for their troubles – again that’s untrue. As Nelson also noted, STIs are most rampant among the over-45s. Today’s young are also more likely than earlier generations to visit sexual-health clinics, keeping piss-cup manufacturers in business by offering themselves up for medical investigation after every one-night stand.

So what, you might think, if this generation is a little more health-conscious than its predecessors? Aren’t we all nowadays? The problem is that young people’s reversion to conservatism, their deep-seated fear of risky behaviour, is also seeping into their politics.

Those supposed harbingers of a new and virulent radical politics – the student protests against tuition fees in 2010 and the anti-capitalism Occupy encampment at St Paul’s in 2011 – were thoroughly shown up by spiked for the posturing, ideas-lite and deeply conformist blobs that they were. But compared with what student politics has been concerning itself with this year, the collective anti-cap sulk of 2010’s ‘fuck the cuts’ students and Occupy grunges seems almost revolutionary. For in 2013, ruddy-cheeked ‘radicals’ shook off any pretence of wanting to change the world around them and instead did their best to seal themselves off from it.

Carrying on like little Mary Whitehouses, student unions up and down Britain took to banning anything that might corrupt their membership’s delicate little brains. A few weeks ago, the student union at Kingston University became the twenty-ninth in the country to ban the Sun, refusing to put it back on campus shelves until it drops Page 3. Robin Thicke’s vaguely lewd pop smash, ‘Blurred Lines’ – charged, along with the Page 3, with denigrating women everywhere – is now banned at over 20 universities.

Like a bizarro extension of the National Union of Students’ longstanding ‘No Platform’ policy for fascists and Islamic extremists, these bans are the mark of a new breed of student intolerant of anything that offends their increasingly prudish sensibilities. Aside from the ongoing rumblings of the ever-risible occupation at the University of Sussex, these censorious campaigns have been at the top of the radical student agenda in 2013.

The causes of this new conservatism in young people aren’t difficult to discern. These are the children of New Labour, subjected to a deluge of public-health scare tactics and micromanagement in the playground and beyond, the products of a time when taking risks with your body or your mind is deemed wantonly reckless. Their febrile approach to politics, their allergy to debate and propensity for easy moralising, stems, as Brendan O’Neill has pointed out previously on spiked, from the dearth of ideas afflicting the modern left more broadly. Indeed, it’s no coincidence that the calls from students to be protected from things they deem unpleasant got louder in the year that the definition of adolescence was extended to the age of 25.

But this is beside the point. Youthful rebellion is precisely about refusing to accept what society sets out for you. Whether it was the foppish middle-class beatniks of the 1950s seeking out debauchery or the young ranks of the October Revolution, youthful radicals have long tried forcibly to change the role society assigned to them. In contrast, today’s so-called rabble-rousing young are all too happy to do what they’ve been told, to fold to the mores of our increasingly pallid society rather than kick against them.