Boris Johnson is not Gordon Gekko

Boris Johnson's speech was far less radical than his critics thought it was. 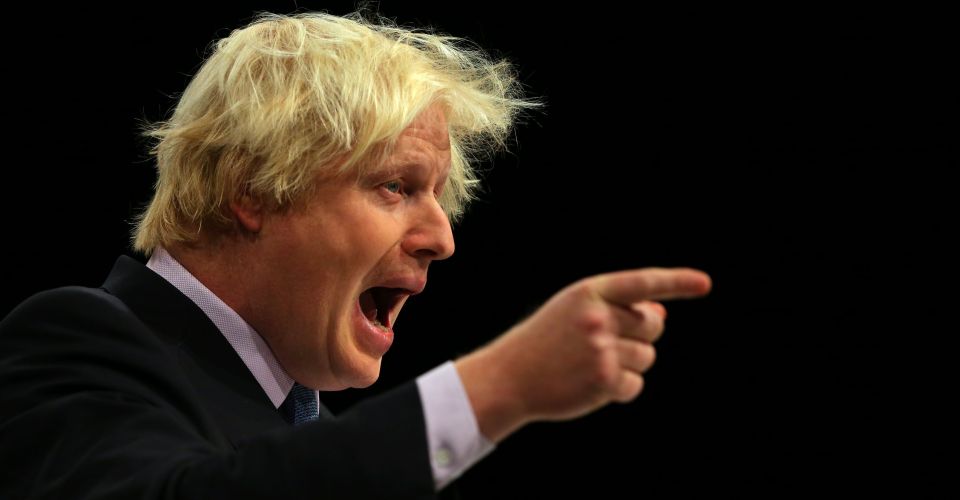 Although last week’s Margaret Thatcher lecture by Boris Johnson was widely understood as a traditional conservative rejection of equality, it was nothing of the sort. It is true that the mayor of London stepped slightly beyond the bounds of what is generally considered appropriate in these oversensitive times. But the thrust of his remarks was in line with the cross-party egalitarian consensus that excessive inequality threatens to undermine social cohesion. Indeed, many of the supposed criticisms of Johnson echoed points he had himself made in his speech.

Johnson’s remarks certainly prompted howls of outrage from the self-appointed guardians of middle Britain. Nick Clegg, the Liberal Democrat leader and deputy prime minister, accused Johnson of ‘fairly unpleasant careless elitism’ and said it was ‘complete anathema’ to everything he had ever stood for. Ed Balls, the shadow chancellor, lamented Johnson’s views while David Lammy, the Labour MP for Tottenham, said the remarks were an ‘insult’ to London’s poor. There were also predictable squeals of righteous indignation in such publications as the Guardian, the Observer, the New Statesman and the Mirror.

Less shrill, but perhaps more notable, were the attempts by the Conservative leadership to distance itself from parts of Johnson’s speech. George Osborne, the chancellor of the exchequer, told the Andrew Marr Show on BBC1 that there was an element of truth in Johnson’s views, but he disagreed with the way they were posed. Judging by press reports, the prime minister’s media machine refrained from defending Johnson, as did the Conservative Party.

The hostility to Johnson focused mainly on two key points. His claim that greed could be a ‘valuable spur to economic activity’ provoked an angry response. Even more contentious was his view of the link between equality and IQ tests. According to Johnson: ‘It is surely relevant to a conversation about equality that as many as 16 per cent of our species have an IQ below 85, while about two per cent have an IQ above 130.’

But if the speech is read in full along with the associated criticism it should be clear that the differences are less pronounced than they first appear. Both Johnson and his critics accept several key premises of the peculiar egalitarianism that reigns supreme at present: economic equality is impossible; equality of opportunity is desirable; and social mobility should be given a high priority. Even on the points where Johnson diverges marginally, his views are not as distinctive as they first appear. To understand the contemporary egalitarian consensus, it is necessary to look at some of its key notions more closely.

The new egalitarianism has a peculiar, paradoxical character. Contrary to a widespread misconception, its goal is not economic or social equality. It typically casts such ends as unrealistic and undesirable. Not only does it eschew equal incomes for all, an easy goal to mock, but it explicitly rejects the abolition of class divisions. Johnson made this clear in his speech with a characteristically eccentric attack on earlier forms of egalitarianism: ‘Ding dong! Marx is dead. Ding dong! Communism’s dead. Ding dong! Socialism’s dead! Ding dong! Clause Four is dead, and it is not coming back.’ But Clegg made essentially the same point when he sneered at the idea of a ‘perfectly homogenous society’ in his critical comments on Johnson’s speech.

Clegg’s formulations echo arguments made in The Spirit Level (2009), a seminal text for present-day egalitarians, which describes itself as not having ‘compared existing societies with impossibly egalitarian imaginary ones’. The book went on to say that it was ‘not about utopias or the extent of human perfectibility’. Inequality’s current critics have no interest in realising the full potential of the whole of society as earlier egalitarians often advocated.

Instead, a central concern of the present generation is that social divisions are becoming dangerously wide. When new egalitarians say they favour ‘more equality’, what they mean is that they fear the consequences of excessive inequality. In essence, they would prefer America and Britain to be more like Scandinavia or perhaps Japan. At the very least, this betrays startlingly low expectations.

But it goes much further than this. Excessive inequality is seen as having all sorts of damaging effects on a society viewed as composed of fragile individuals. This is apparent from the arguments in The Spirit Level – a text endorsed by leaders of both the main parties. Once inequality gets beyond a certain point, it is said to, among other things, damage mental health, undermine physical health, harm educational performance, help create a culture of violence and make serious crime more likely. The Spirit Level advocates a therapeutic approach in the sense that it favours top-down interventions to treat what it regards as a dysfunctional society.

New egalitarians are therefore not concerned with realising human potential, but with managing the supposedly dangerous effects of excessive inequality. The outlook informs many pernicious policies. One of the most overtly intrusive is the drive to curb anti-social behaviour as this is seen as thriving in highly unequal environments. This helps explain why therapeutic egalitarianism tends to be so authoritarian. It is on a mission to intervene in the most intimate aspects of people’s lives in its zeal to contain the effects of social disintegration.

When egalitarians do refer to ‘equality’ nowadays – as opposed to criticising excessive inequality – they are usually talking about equality of opportunity. Strictly speaking, this is a misnomer, since equality of opportunity is more akin to the inherently slippery notion of fairness than it is to equality as it was understood historically. In essence, the campaign for a fair society runs parallel to the drive against anti-social behaviour. The aim is to find as many ways as possible to bind society together to tackle social fragmentation. Much of the focus here is on education, with initiatives such as extending early years’ learning, closing the attainment gap in schools and ensuring ‘fair access’ to universities. One of the most damaging consequences of this preoccupation is that it transforms the educational sector into a vehicle for social inclusion. Curbing the extremes of social inequality and maintaining social cohesion supersede the historical goal of transmitting knowledge between generations.

The notion of social mobility is closely linked to that of equality of opportunity. Advocates of mobility typically start from the premise that the prospects for economic growth or of raising overall living standards are limited. From this perspective, the best that can be hoped for is that the most deserving, however they are defined, should be allowed to rise up the social hierarchy. The corollary of this argument – that some must fall as others rise – is rarely drawn out. In a static society, one person’s gain must correspond to someone else’s loss.

Against this backdrop, it should be clearer why the critics reacted strongly against Johnson’s remarks. Although he did not stray far from the prevailing script, some of his comments were not formulated in a way that is currently deemed acceptable.

Let’s start with greed. It is a central tenet of the new egalitarianism that the idea of ‘greed is good’ – often associated with what is dubbed a ‘neoliberal’ worldview – is dangerous. Greed is seen as a key force corroding the social bonds that bind society together. Such dangerous sentiment is seen as flourishing in a society where inequality has become excessive and behaviour is not regulated sufficiently tightly.

As it happens, Johnson was more circumspect in his support for greed than the headlines suggested. In his own idiosyncratic way, he called for a community spirit to counterbalance the impact of greed. It is worth quoting at length:

‘I hope that in many ways it is not like the 1980s all over again. I don’t imagine that there will be a return of teddy-bear braces and young men and women driving Porsches and bawling into brick-sized mobiles. But I also hope that there is no return to that spirit of Loadsamoney heartlessness – figuratively riffling banknotes under the noses of the homeless; and I hope that this time the Gordon Gekkos of London are conspicuous not just for their greed – valid motivator though greed may be for economic progress – as for what they give and do for the rest of the population, many of whom have experienced real falls in their incomes over the last five years.’

In practice, Johnson’s London administration’s attempts to promote social cohesion have followed similar lines to the current ruling coalition and the previous Labour government. It pursues a top-down approach in which the authorities micromanage personal behaviour. There is little recognition of the notion that people should be allowed individual autonomy as long as they do not harm others. For example, one of Johnson’s first actions after being elected as mayor in 2008 was to ban the consumption of alcohol on London’s public-transport system. This restriction is itself part of a draconian behaviour code that, among other things, bans any form of action the authorities themselves consider anti-social. In essence, practically anything can be deemed unacceptable.

As for Johnson’s comments about IQ, they were clearly at odds with the notion of equality of opportunity. Although contemporary politics, or what passes as such, is riddled with elitist assumptions, it is not considered polite to articulate them openly. As it happens, his remarks were banal since it is true by definition that 15 per cent of the population has an IQ below 85 while two per cent has an IQ over 130. That is the way the test’s scoring system is designed: IQ is a measure of where an individual sits in the distribution of test scores at any particular time, not an absolute measure of intelligence. Even if everyone miraculously became, say, 10 times more intelligent, the distribution of scores would remain the same. Indeed there is a strong case that the scores on IQ tests are rising over time, a phenomenon known as the Flynn effect, but the average is simply reset to 100.

Nevertheless, Johnson unwittingly called the notion of equality of opportunity into question with his throwaway remarks about IQ scores. Even though he cast himself as a supporter of opportunity, his remarks raised an awkward point about whether it can be truly equal. If opportunity is not equal in this respect then there could be other ways in which it might be unequal too.

New egalitarianism is an entirely retrograde trend. Contrary to a common misconception, it does not uphold economic and social equality. It is motivated by fear rather than a desire to realise human potential. Its concern is to use the considerable powers of the state to curb what it sees as the socially corrosive effects of excessive inequality. In its zeal to micromanage individual behaviour, the new egalitarianism exhibits contempt for personal freedom and individual autonomy. Under the guise of equality of opportunity it has also degraded the education system by transforming it into a vehicle for promoting social inclusion.

The row over Boris Johnson’s speech should help reveal how pervasive the pernicious influence of the new egalitarianism has become.