Generation jobless: spoiled by the state 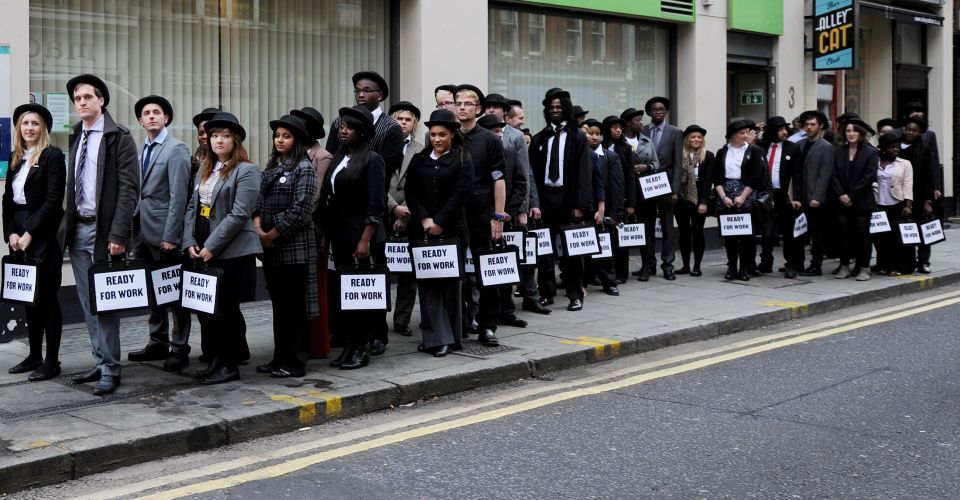 Last week, youth unemployment was once again at the top of the UK political agenda when labour-market statistics revealed that the Lib-Con coalition government’s flagship £1 billion scheme to help young people into work had proved a complete failure.

The Youth Contract aimed to create half a million new opportunities for so-called NEETs (people not in education, employment or training), by offering £2,275 in short-term subsidy to companies willing to take on and train a young person for an initial six months. However, since launching in April 2012, only 21,000 applications were made out of the 160,000 subsidies allocated.

It’s easy to see why. The idea that cash-strapped businesses, otherwise unable to recruit new employees, much less inexperienced school-leavers, would take part is moronic. Despite the subsidy, one assumes many companies were naturally hesitant about taking on and training staff to whom they can’t offer long-term employment.

Unfortunately, rather than draw a line under the whole silly business, the government and the opposition are angling for new, perhaps more pervasive alternatives. The scheme’s initial advisers are urging the government to follow Labour’s proposals for a full ‘work guarantee’ for those leaving education and entering the world of work. Meanwhile, a report published by the Social Mobility and Child Poverty Commission suggested the creation of a new administrative system that would help allocate jobs to those leaving school – mirroring services like UCAS which serve prospective university students.

Despite the evident flaws of such schemes, this renewed focus on the issue of youth employment has been cheered on by commentators. One writer for the New Statesman celebrated the fact that at least now politicians of all stripes were taking it seriously. However, there’s no escaping the fact that the highlighting of this supposedly ‘jilted generation’ as unique victims of the economic crisis is constantly being spouted by commentators and politicians. Many bemoaned the fact that the vast majority of new apprenticeships created by the coalition have been taken up by those over 25, while there is constant talk of slashing winter fuel allowances for pensioners. This debate assumes that 16- to 24-year-olds, presented as the poor victims of an economy whose failure they had no hand in, are to be held up as worthy of our utmost sympathy and support.

This is not to suggest that those entering the job market without skills or experience don’t face particular challenges, but this has, naturally, always been the case. What has changed, however, is how we conceive of young people. In decades past, we imbued youth with a sense of resilience, resourcefulness and gumption; largely free of familial or financial ties, young people were able to go out into the world and create opportunity for themselves. Today, we think of them as overgrown children, helplessly languishing on benefits and reaching for the benevolent hand of the state to guide them into the workplace.

This shift has its roots in politicians’ complete failure to discuss real material solutions to the crisis. Rather than channelling the state’s energies into creating industry and fuelling growth – and creating new jobs in the process – there has been nothing but a noxious sense of fatalism from both left and right. The Tories obsess about penny-pinching and balancing the government’s books, as if this will solve the problem. The left focuses on shoring up benefits, keeping the unemployed’s heads just above water rather than actually creating work for them. Even the Youth Contract and its proposed successors are merely tarted-up welfare – paying companies public money to temporarily employ people – which again ignores the lack of economic activity underpinning unemployment.

The idea that all we can do in times of crisis is weather the storm, compounded by simultaneous chatter about the ‘psychological scars‘ inflicted upon the jobless young, has had a disastrous effect on the youth of today. Rather than conceiving of themselves as autonomous agents, masters of their own destiny and able to change their situation and reshape society in the process, they’ve internalised the idea that nothing can be done – that they are helpless victims of circumstance. Not only has this quashed any entrepreneurial spirit, but as Neil Davenport has pointed out previously on spiked, it has scuppered any radical opposition to the system which has failed to provide for them. While in the 1980s, young people took to the streets on marches in their thousands to demand jobs, barely a few hundred assembled during the recent Right To Work demonstration of 2012. Nowadays, the young and the jobless sit at home, waiting for a new initiative to come knocking.

While the younger generation are merely symptoms of this wider malaise, we still shouldn’t make any excuses for them – there’s been quite enough of that already. They must shake off their dependency on the state mechanisms aimed only to manage their predicament, and embrace the difficult task of remaking their lives, the economy and society, anew.