US shutdown: the abdication of the political class

The shutdown shows how lost and immature US rulers have become. 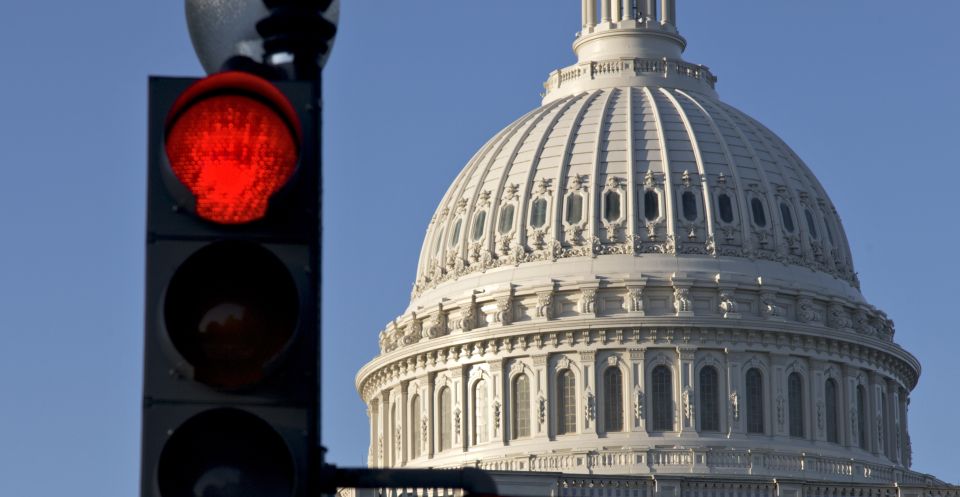 After the US Congress and the White House were unable to reach agreement over the budget and keep government finances flowing, a ‘shutdown’ was introduced this week. Some 800,000 federal workers will be furloughed, and more than a million other employees will work without pay. Although the dispute could be resolved any day, many observers say the shutdown is likely to continue for some time. And looming in the near future is the threat that the US will not raise its so-called debt ceiling, which could disrupt world markets.

The conventional wisdom is that this is all the fault of a minority of Tea Party Republicans in the House of Representatives. Senator Ted Cruz of Texas, leader of the Tea Party opposition, is portrayed as a crazed fanatic on a personal mission to take down President Obama. Not far from the surface have been disdainful complaints that the real problem is the people who the Tea Partiers represent, mainly in the southern states and the ‘flyover’ region in the middle of the US.

This view really misses the bigger picture. The shutdown is the culmination of broad political trends over years, not simply the outcome of a few hotheads’ actions in recent weeks. And assigning blame to one group overlooks how the entire political class, Democrats and Republicans alike, are implicated in this mess.

House Republicans certainly deserve criticism. They’ve marched to the cliff, but never with any idea of what to do when they get there. As the Wall Street Journal scathingly put it, ‘perhaps the only war strategising more inept than President Obama’s on Syria are GOP plans for the budget hostilities this autumn’. Indeed, at a time when Obama is nearing lame-duck status, the Republican approach is an own goal.

That said, the most frequently aired criticisms of the House Republicans are far off the mark. Tea Party Republicans are often described as excessively ideological and opposed to big government. In reality, Tea Party opposition is typically more opportunist than principled. While seeking to cut back some areas of the state, such as welfare, few of Tea Party Republicans seek to reduce big spending in other areas, such as defence or corporate subsidies.

In the current budget battle, Republicans are making their stand against the Obamacare health reforms. But this is a phoney war. The Republicans are right to view Obamacare as a bureaucratic morass, but it’s not as if the pre-Obamacare health system they uphold was a model of efficiency. The fact is that Obamacare is not as radical as either Obama or the Republicans pretend; it represents a re-arrangement of a complex private-public system that does nothing to address the costs that make it the most expensive in the world. The Republicans may not like Obamacare, but they do not offer an alternative. Indeed, much of the Tea Party grassroots opposition is fuelled by a fear that the Obamacare reforms will undermine government Medicare benefits for senior citizens – in other words, they are acting to defend state provision, not end it.

The main argument used by Obama and the Democrats is that the House Republicans are recklessly ‘sabotaging’ a democratically passed law, and using illegitimate tactics that hold America ‘to ransom’. Once Obamacare was passed in 2010, and Obama was re-elected in 2012, Republicans should have admitted defeat and dropped all opposition, say the Democrats. And threatening to shut down the government and/or to hit the debt ceiling are unprecedented and outside normal politics, they add.

But there are plenty of examples of laws that were fought soon after they were passed – for example, the Democrats’ opposition to then-president George W Bush’s tax cuts. As it happens, it is not as if Obamacare is set in stone. It hasn’t even been fully introduced yet (a major part – health exchanges – was just launched today), and the White House has modified it significantly over time (including a delay for businesses). Moreover, the Democrats have themselves used the threat of shutdown and not raising the debt ceiling limit to affect policy. In 1973, for instance, Ted Kennedy tried to force President Richard Nixon to accept campaign-finance reforms by attaching his proposal to emergency debt-limit legislation.

In fact, the Democrats’ ‘argument’ against the Republicans tactics today, seeks to end political argument. Rather than engage in a political defence of their signature health reform, the Democrats would prefer to label any opposition ‘sabotage’ or ‘ransom’. They don’t want to get their hands dirty in the cut and thrust of politics.

In this respect, America’s political representatives are mirroring the recent narrowing of debate in society more generally. From guns to gay marriage and a slew of other issues, the cry goes up: there’s nothing to debate with these unreasonable people. And it’s not just liberal Democrats; many Republicans have tried to dismiss Obama as an illegitimate politician (there are still birthers out there). However, it’s one thing to try to close down a debate in the public square by seeking to de-legitimise your opponent; when this approach is applied to government, it means nothing gets done – and government itself shuts down.

All sides have known that a shutdown was on its way, and yet little was done to avert it. Instead, the politicos have all sought to blame each other. There’s been a lot of speculation that the Democrats are quite happy with a shutdown, because they believe the public will blame the Republicans (just as they did in the Newt Gingrich-led shutdown in 1995-96).

The truth is that the entire American political class is dysfunctional and shares responsibility for this debacle. An entire government responsible to some 315million people does not just stop because of 30 Republicans in Congress. A plague on all your houses appears to be the popular view, too, as polls show that Americans have a low opinion of how both Republicans and Democrats have conducted themselves. They also (rightly) believe the current budget battle is about petty political advantage, not principle.

The real problem is a lack of political leadership. Both the White House and Congress prefer to point fingers rather than take charge of matters. The latest controversy is not the result of what’s happened during the past three weeks. The US has flirted with shutdown and debt default for years. And an unwillingness to negotiate has been characteristic of the Obama years in office. This broken-down relationship is often said to be the result of Republican intransigence, but as Bob Woodward – a journalist sympathetic to Democrats – wrote in The Price of Politics, Obama and the White House have avoided engaging in serious discussions with their opponents.

What’s striking is how weak every leader is. In Congress, Republican leaders John Boehner (House) and Mitch McConnell (Senate) have little sway over their fellow party members. Their Democrat counterparts Nancy Pelosi (House ) and Harry Reid (Senate) are equally ineffectual. And then there is the standoffish Obama, who lacks any capacity to get everyone in a room and stamp his authority on the situation.

The government shutdown is the perfect symbol of the true stagnation in American politics. The political class ignores big issues like the economy, and then when it can’t even keep the basic functions of government operating, it seeks to wash its hands of any responsibility. It’s not a case of excessive politics, it’s a case of the lack of real politics. Like children, our political representatives have taken their balls home and won’t play. America needs grown-ups.