The idea that there will be ‘no British intervention in Syria’ is surreal. There already is, and it has proved lethal. 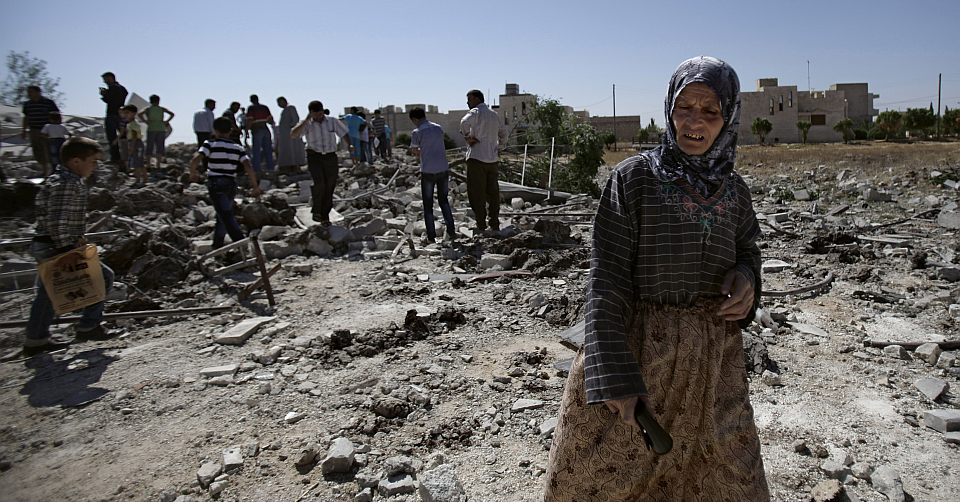 There’s something perverse about the outburst of self-congratulation among Britain’s chattering classes following David Cameron’s defeat over Syria in the House of Commons last week. From the anti-war movement to the military’s top brass, from leftish broadsheets to shrill tabloids, everyone is crowing over (and trying to take credit for) the defeat of Cameron’s militaristic proposal by 285 votes to 272. The Guardian celebrates the fact that ‘there will be no British intervention in Syria’, because such an intervention would only have ‘inflam[ed] an already critical situation’.

No British intervention in Syria? Are these people serious? Britain has been intervening in Syria for two years. Morally, militarily, politically and legalistically, the British and American governments have been meddling in the hellhole that is post-Arab Spring Syria since early 2011. And in the process they exacerbated the conflict, deepened the divisions and shot down in flames any prospect for a negotiated settlement. Stop crowing, Britain – you pushed Syria to the precipice it now stands on.

Almost as soon as it was announced that Cameron’s proposal for military action against Syria was defeated by 13 votes, observers were hailing a new era of anti-war sentiment. From the left to the right, there was hyperbole about Britain’s moral crusading in foreign fields finally receiving a much-needed knock to the head. A leader of the Stop the War movement said ‘a corner has been turned on the road to peace’, as our representatives have finally ‘learned the lessons of Iraq’. From the right, Tory MP Crispin Blunt said he was ‘delighted that we are relieving ourselves of imperial pretension’ by not getting involved in Syria.

This hailing of a new, post-interventionism epoch doesn’t add up, on any level. For a start, if our leaders have ‘learned the lessons of Iraq’, a war that kicked off in 2003, then why just two years ago did an overwhelming majority of 557 MPs vote to bomb Libya, with only 13 voting against? The idea that parliament, especially the Labour section of it, has discovered that Britain doesn’t really have the right to intervene in other people’s conflicts is surreally off-target.

More importantly, to claim, in the words of Crispin Blunt, that the British authorities are ‘not getting involved’ in Syria is to display a wilful ignorance of what has been happening in global affairs over the past two years, when Britain has waded up to its neck in the Syrian debacle.

The political and media classes’ self-satisfied claims that by staying at home we right-minded Brits are avoiding ‘inflaming an already critical situation’ fans the myth that the main reason Syria is a mess is because of Assad’s evil, or maybe because of the wickedness of some of the elements in the anti-Assad opposition forces. In truth, the increasingly dire and desperate situation in Syria is a direct product of Western, including British, intervention. Indeed, the two key upheavals in the conflict in Syria – first, the transformation of it from a civilian uprising into a civil war in July 2011, and second the deadly escalation of the conflict in late 2011 – were directly brought about by the moral grandstanding of UK foreign secretary William Hague and then US secretary of state Hillary Clinton.

In the first part of 2011, Syria was not that different to other Arab countries where civilians were rising up against their rulers. There were mass protests and, in response, both repression and concessions from the Assad regime. Then, in July 2011 the instability crossed over into a civil war, as scores of officers defected from Assad’s army and announced the formation of the Free Syrian Army (FSA), which ‘formally marked the beginning of armed resistance to the Assad government’.

What changed in July 2011 to bring about the formation of the FSA and the start of a civil war? The West openly decreed that Assad was no longer the legitimate ruler of Syria. In July 2011, as the Assad regime was holding a ‘national dialogue’ on reforms that might satiate the civil uprising, first William Hague publicly announced that Assad’s concessions were not enough and that he was now ‘losing legitimacy’, and then Hillary Clinton, in mid-July, gave a speech announcing that Assad had ‘lost legitimacy’ and that America has ‘absolutely nothing invested in him remaining in power’. The Assad regime described these Western comments as a ‘provocation’. It had a point. The Western decrees were a tipping point, acting as an invitation to members of Assad’s inner circle to break away and form an opposition movement. Sure enough, within days of Clinton’s and Hague’s public rubbishing of Assad’s legitimacy, some of his military officers announced the formation of the FSA, and the civil war started.

Not content with helping to give rise to the FSA, the West then helped to fund and arm it. It was given shelter in key NATO ally Turkey, and CIA officials started operating along the Turkish-Syrian border, where, in the words of the New York Times, they worked with ‘Syria’s Muslim Brotherhood, Turkey, Saudi Arabia and Qatar’ to help funnel ‘automatic rifles, rocket-propelled grenades, ammunition and some anti-tank weapons to the FSA’. President Obama granted a Washington-based NGO a licence to raise money for the FSA. And both America and Britain provided direct funding and ‘non-lethal assistance’ to the FSA. This had the effect of emboldening the rebel forces and intensifying the conflict that was ignited by the West’s removal of legitimacy from Assad.

The escalation of the Syrian conflict in late 2011 and early 2012 was also a direct product of Western meddling. In December 2011 and January 2012, the conflict entered a deadly new phase, as the opposition forces grew in number and launched more attacks, and as Assad started using large-scale artillery operations against rebel strongholds. This escalation must be viewed in the context of the West’s formal adoption of the opposition forces as the legitimate government of Syria. In December 2011 and January 2012, first France and then America and Britain formally recognised the Syrian National Council, a collection of elite Syrian exiles, politicians and academics with links to the FSA, as the legitimate representative of the Syrian people. The knock-on effect was swift and deadly – the West’s recognition emboldened the rebel forces and deepened the desperation of the already-isolated Assad, who lashed out ever-more chaotically against those parts of Syria ruled by a new ‘government’ christened by the West.

The West’s formal sanctification of a mishmash of oppositional forces also dealt the death blow to the original Syrian uprising. In the words of Bassam Haddad, director of Middle East Studies at George Mason University in the US, the international blessing of the SNC in late 2011 meant ‘the Syrian revolution [could] no longer be taken at face value’, since the groups chosen to lead it were now ‘totally dependent on external powers and funding’. That is, the West had helped to reduce the Syrian people to the level of observers of – and fundamentally victims of – a civil war between oppositional forces selected and armed with the okay of the West and a regime decreed illegitimate by the West.

‘No British intervention in Syria’? The British government, along with its allies, helped to start the civil war; it then escalated it; it fuelled it with money, material assistance and weaponry; it used those ‘imperial pretensions’ that Crispin Blunt thinks are dead to decree who is legitimate in Syria and who is not, in the process upping both the ante and body count in that benighted nation. The key destructive role which the West has played has been to continually undermine the political and moral authority of the Assad regime. That has acted as a green light to the opposition forces and has further isolated Assad, encouraging him to lash out ever-more rashly against his enemies. The terrible situation Syria finds itself in today, its journey from a country undergoing a civil uprising to one in which whole towns have been destroyed and chemical weapons have desperately been deployed by some force or other, is a product of external intervention. The depravity was set in motion by those nations now congratulating themselves for ‘not getting involved’.

If the cheerers of Cameron’s Commons defeat were merely wrong in their gleeful claims that there will be ‘no British intervention in Syria’, that would be bad enough. But it’s far worse. They’re now demanding the continuation of the very same Western meddling that has all but destroyed Syria. The Guardian, in the same breath as saying Cameron’s military strike would have ‘inflam[ed] an already critical situation’, says that instead ‘the West needs to concentrate on formally criminalising the Assad regime’ and turning it into an ‘international pariah’. The West has already done that. And in the process it started and stoked a dirty civil war. The anti-Cameron peaceniks want Western warmongering by another name.

The New Statesman says it is great the British authorities won’t be launching a strike on Syria because, post-Iraq, we’re all sick of having blood on our hands. No Syrian blood on British hands? Look a bit more closely – you’ll see it.