Anti-fracking activists who have descended on West Sussex claim to be speaking for the locals. The locals beg to differ. 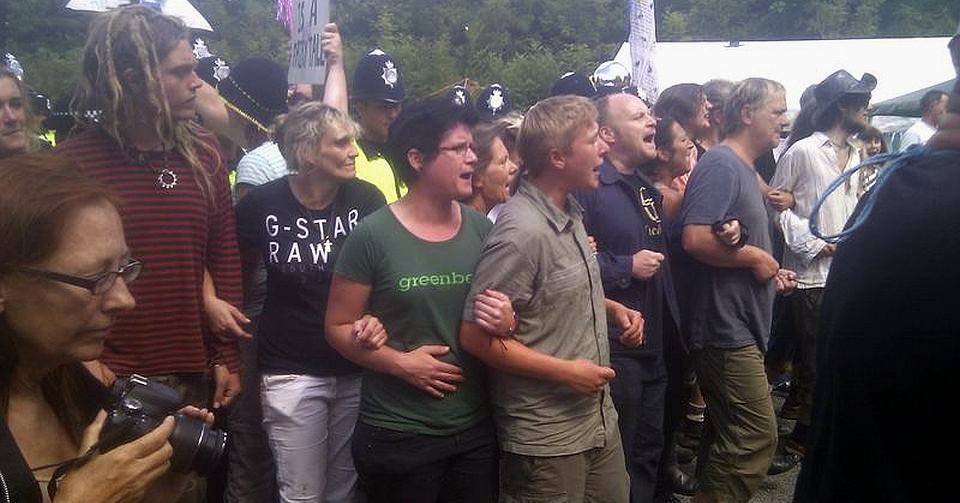 Balcombe, a small village in West Sussex, is currently being invaded. Not by a foreign army or extra-terrestrials, but by something far more annoying: anti-fracking activists, who are protesting against energy company Cuadrilla’s plans for exploratory drilling for oil and gas. (The company has no permission for, or immediate plans to use, hydraulic fracturing or ‘fracking’, though the technique is under serious consideration for full-scale production.) I headed down to Balcombe to see what’s going on.

I catch my first glimpse of the anti-fracking brigade as soon as I disembark at Balcombe station. There they were getting off the train with me, about a dozen of them, placards in one hand, bongo drums in the other, and a stench of something I’m hoping is righteousness.

Declining the offer of a lift to the drilling site about half a mile from the village, I make my way on foot. Straight away, the impact of the protests is clear. What presumably used to be a quiet country road has been transformed: it’s now lined by dozens of police vans.

The protesters’ camp seems to be inhabited, in the main, by young, mostly dreadlocked anarchists, speaking several languages. I say ‘anarchists’, although whether they have grasped the basic precepts of anarchism is uncertain. Historically, you see, anarchists have been quite keen on the abolition of the state. Not this lot: they like the state so much that they want it, as one banner proclaimed, to come to their aid in the bid to ban fracking.

Before I can speak to the not-very-anarchic contingent, I am intercepted and ushered away by a man in his fifties wearing a pith helmet, high-vis jacket and Dr Feelgood t-shirt. It seems that as far as Dr Feelgood is concerned, I’m not talking to the right kind of protester. Identifying himself as ‘a concerned local’, he gives me a tour of the camp, showing me a children’s play area, the coffee corner and the information tent. He tells me the protest is inspired by the ‘Quaker tradition of passive resistance’. I ask if he’s a Quaker. ‘No, I’m Catholic.’

I’m then introduced to two nice ladies from Friends of the Earth who are armed with a seemingly endless supply of just-add-water soundbites. Fracking is ‘dangerous, unpredictable, chaotic’, they say. It involves ‘top-secret chemical cocktails’ and ‘volatile compounds’. The entire town is involved in the protest, they claim, and the few who don’t support them are either ‘Tories’ or tenants of the estate that is leasing the land to Cuadrilla.

Having failed to prevent Cuadrilla from beginning its exploration last Friday, the protesters have turned their attention to obstructing the supply trucks that arrive each day. But following some arrests last week, police liaison officers brokered a deal with the protesters.

The end result is more pantomime than direct action. As a truck approaches encircled by a phalanx of bobbies, bells ring out around the camp. Protesters then dash about grabbing their bongo drums and placards. They then ‘obstruct’ the lorry by marching slowly in front of it and engage in mild jostling with the police before allowing said lorry to enter the site. All the while they chant banalities like ‘You can’t drink money!’ and ‘Power to the little people!’. This strange ritual takes about 10 minutes to complete and is repeated five or six times a day, and according to both police and protesters it is likely to continue for the next five weeks. The arrangement suits everyone: the police don’t have to deal with any hassle, Cuadrilla receives its supplies, and the fracktivists get to feel like they’re sticking it to The Man.

The protesters might not be very effective, but there’s no doubting their zeal. Another nice lady, from an organisation called Eradicating Ecocide, tells me: ‘Fracking is the biggest issue in the world today.’ She says ‘anyone working in the fracking industry is a psychopath – I’d like to have them all clinically tested’. She also says she saw a glow-worm the previous night. This meant Balcombe was ‘a very special place’.

The fracktivists are an odd bunch. I ask Dr Feelgood why the majority of people at the camp are not actually locals but rather seem to be eco-eccentrics from elsewhere. ‘People have come from all over to stand in solidarity with Balcombe’, he says.

Tired and thirsty, I decide to make my way back to the village to check out this ‘solidarity’ for myself. To what extent are the fracktivists really speaking for the people of Balcombe?

The centre of Balcombe is a world away from the chaos of the camp. The only visible sign that something unusual is going on is a BBC camera crew vox-popping residents in the street. I duck into the Half Moon Inn, where the patrons present a very different picture of what is happening. Many say the same thing: that it isn’t the fracking that has disrupted the area but the arrival of the protesters. Even the few I speak to who are against fracking are not exactly standing in solidarity with the fracktivists. The figure being bandied about of 82 per cent of locals being against exploration is inaccurate, they tell me. The true number, they say, is closer to one-in-three.

So why the disparity between actual public sentiment in Balcombe and the polls? I’m told very few people responded to the first poll, except those who were already passionately anti-fracking. Another doorstep poll has since been conducted, but, as one elderly gentleman told me, he felt pressurised to say he was against the fracking because his neighbour was asking the questions.

John, one of the locals, admitted being apprehensive about fracking. ‘But no one really believes it will cause earthquakes or poison the water’, he says. ‘The protesters have no real solutions. We probably need fracking and we need nuclear power, but they’re against both.’

Another man, a farmer, tells me how ‘just one or two people had stirred up a load of nonsense about nothing’. Others told me that oil giant Conoco had done exploration around the village in 1986 and 1987 without any objections; they’re confused as to why similar activity has attracted such adverse attention now.

As I make my way back to the station, I chat to two ladies walking their dogs. They’re watching a traffic jam caused by a police roadblock. Both had been told by activists that once the drilling started there would be unbearable noise day and night. They joke that now the drilling has started, the only noise they hear is the protesters making a ‘terrible racket’.

One thing’s for sure – the anti-fracking protesters might be loud and good at getting media attention, but they don’t speak for the people of Balcombe, or for many people around Britain.