Rudd v Gillard: the face of things to come

The bloodless coup against Gillard isn't a peculiarly Oz phenomenon – across the West politics is becoming more oligarchical and bitchy. 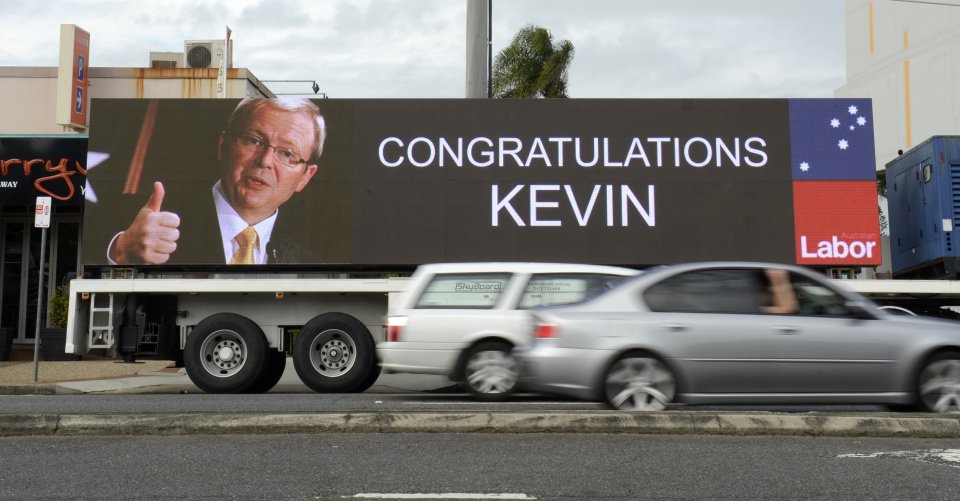 The ease with which Labor’s Kevin Rudd deposed party leader and Australia’s prime minister, Julia Gillard, threatens to give the term stab-in-the-back a bad name.

There was something brutally casual about the promiscuous manner in which the Australian Labor Party toppled its own leader. Three years ago, of course, it was Rudd’s turn to face the chop, as Gillard, who was then his young protégé, seized the reins of power. Then, commentators criticised Gillard’s shabby treatment of a rather inept Rudd. It was suggested that her callous behaviour would ruin her party’s chances at the polls. This time, the palace coup has been blamed on the sexism of Australia’s political life, and Rudd has suddenly been transformed into a closet misogynist who has finally decided to come out.

Neither the overthrow of Gillard today, nor the humiliating exit of Rudd in 2010, has any real connection to differences of views and opinions. The Labor Party is a political principle-free zone and is entirely devoted to winning elections. Like many political parties in the Western world, it is little more than a political machine that serves the interests of its individual leaders. The latest bout between Gillard and Rudd is an example of the type of politics that prevails in such parties: ‘It’s all about me.’

Back in 2010, when news of Gillard’s coup broke, I was travelling in Australia and interviewing people about their attitudes towards political issues. At the time, almost everyone I talked to regarded the conflict between Rudd and Gillard as an example of infighting among professional politicians. Virtually no one even attempted to suggest there might be some important cause or issue at stake. Only one person made even a half-hearted attempt to talk about Labor’s ‘core values’. His response to my question about what these values were was evasive and incoherent. Apart from a few hardened party activists, no one expressed any strong interest in the identity of the Labor Party’s leader. It is likely that the public’s reaction to the displacement of Gillard by Rudd is no less indifferent to the displacement of Rudd by Gillard.

The only difference between now and then is that Gillard and her supporters have sought to recast a clash of individual egos as a sexist backlash against a woman prime minister. It is, of course, possible that Labor has its fair share of sexist pigs. Yet the manner of Gillard’s demise bears an uncanny resemblance to that of her predecessor-now-turned-predator. In both cases, the main forces at work were those of the politics of personality, petty egos and the party’s electoral opportunism.

There is nothing distinctly Australian about this sordid episode. The oligarchic domination of public life, where the politics of personality trumps the interest of the electorate, is also prevalent in the UK and Europe. In such circumstances, UK party leaders like the Conservatives’ David Cameron or Labour’s Ed Miliband are forced to devote more energy to watching their backs than to leading from the front.

‘It’s almost Shakespearean what has happened’, said Shaun Branagan of the advertising agency Ogilvy, on the Rudd-Gillard affair. It takes a public-relations guy to lend this pointless coup a Shakespearean grandeur. But this is no Macbeth. The new oligarchs don’t do dilemmas and inner torment. Words like ‘honour’ and ‘loyalty’ are regarded as outdated distractions. And, typically, no blood is spilt. To paraphrase the old Bard: ‘Politics is but a walking shadow, a poor player, that struts and frets his hour upon the stage and then is heard no more; it is a tale told by an idiot, full of sound and fury, signifying nothing.’

Frank Furedi’s most recent book, Moral Crusades in an Age of Mistrust: The Jimmy Savile Scandal is published by Palgrave Macmillan. (Order this book from Amazon(UK).) Visit his personal website here.