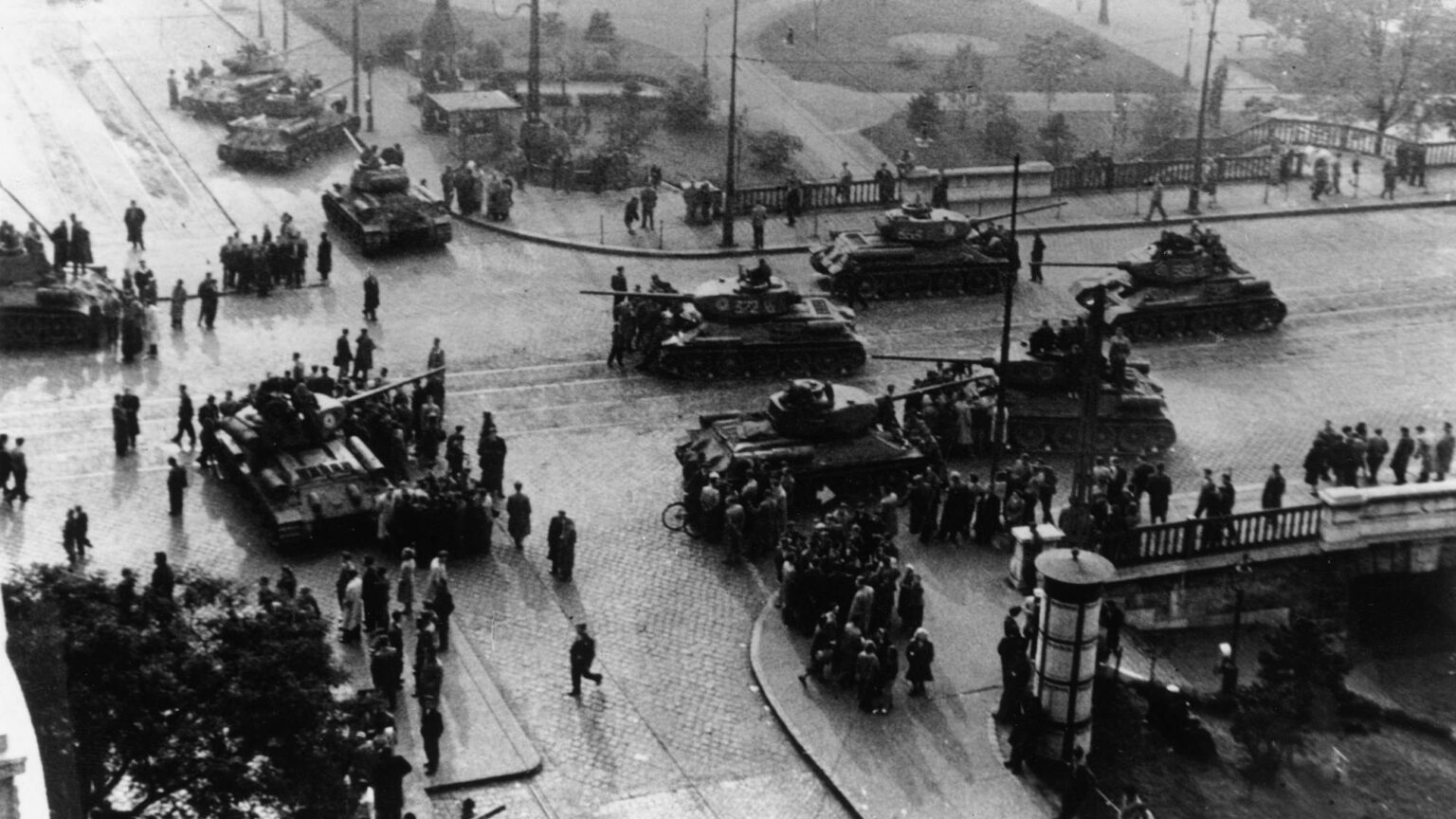 What it was like to be a nine-year old 'class enemy' when Soviet tanks rolled into Budapest to crush the 1956 Hungarian uprising.

I was nine years old when fighting broke out in Budapest in October 1956. At the time I naively thought that the uprising against the Hungarian regime and its Soviet masters was the most important event in the world. It wasn’t, but it did mark a crucial chapter in the disintegration of Stalinism.

The events of 1956 were a turning point in the fate of the Soviet empire and its sympathisers in the West. More than any other event, the Hungarian revolution served to discredit the Soviet Union and the international Communist movement. Millions of people who were sympathetic to the Soviet cause reacted with horror to the sight of Red Army tanks crushing a popular workers’ uprising in Budapest. Western communist parties suffered a serious loss of members and many never recovered from the shock. Inadvertently, the revolution served as a catalyst for deepening divisions within the official Communist movement and accelerated the coming Sino-Soviet split.

It is hard to overestimate the loss of legitimacy suffered by the Stalinists in 1956. Until the Hungarian revolution the official Communist movement enjoyed considerable cultural authority amongst the Western intelligentsia, as young artists and intellectuals were influenced by communist politics and ideas. After 1956, large sections of progressive opinion became estranged from the official Communist movement. And when young people rebelled in the 1960s they were no less critical of Moscow than of Washington. That after 1956 the Soviet leadership ceased to inspire the younger generations was one of the main accomplishments of the Hungarian October. There were of course other influences that contributed to this development, but after the crushing of a movement of students and workers it became impossible for Moscow to retain its radical credentials.

My revolution began in a steaming kitchen, where the mother of my best friend Gabi had just cooked the family duck. In ritualistic fashion all of us children lined up to receive our ration of dripping on garlic toast. I have never forgotten the Proustian moment as I took in the aroma of the crackling and the garlic, only to be rudely interrupted by loud shouts coming from the street. We could not believe our eyes when we looked out of the window. There were thousands of people singing and shouting and thoroughly enjoying themselves. Uncharacteristically we forgot about our treat. Within a couple of minutes I had learned a new word – ‘demonstration’, and as Gabi and I ran into the procession I think we sensed that our lives would never be the same again. This was late afternoon, 23 October 1956, and the Hungarian revolution was about to erupt.

I grew up in a family intensely hostile to Hungary’s Stalinist regime. My father Laszlo was denounced as a ‘class enemy’, and in 1948 he had been arrested and interned for five months. His crime was to be a self-employed watchmaker and a member of the populist Smallholders Party. In 1955 he spent another nine weeks in jail. The suspicion directed at my dad extended to the whole family. As a result my sister Judith was prohibited from going to university. Although she graduated from high school with top scores in 1955, she was informed that she was a ‘class alien’ and therefore not deemed suitable for higher education. Thwarted from realising her ambition to become a doctor, Judith became involved with clandestine anti-government student groups that emerged in Budapest in early 1956.

From an early age I was instructed to watch my steps and to beware of the Communists. Suspicion towards the enemy even extended to my relations with other children. At school I instinctively knew to be wary of mixing with the children of Communist Party members. All my childhood friends knew that they had to watch their words. We loved sharing crude anti-Communist jokes among ourselves, but we also understood that we could get our families and us into serious trouble if we were overheard by the wrong people.

Until the outbreak of the revolution, my most daring and exciting experience was to accompany my dad on his expeditions to an underground bookshop. At this time publications were heavily censored. Many pre-war books had been taken off library shelves, and the reading of politically incorrect texts was discouraged. One of our acquaintances, an octogenarian former bookseller called Jancsi, had turned his apartment into an illegal bookshop. To create space for the thousands of books piled up in his flat, Jansci got rid of most of his furniture. For me this strange musty smelling place was an enchanted world. I loved listening to the animated discussions as customers debated the merits of this or that book. This was a special place where a child’s imagination could run riot without fearing official retribution. It was here that I discovered the Hungarian translations of Wild West stories written by the German author Karl May, and developed a boyhood fascination with the American frontier. I sometimes think that everyone who entered Jancsi’s literary den left a different person.

For my family reading served as a form of defiance. My father, along with thousands of other Hungarians, sought to get his hands on uncensored foreign newspapers and reading material. In early 1956 groups of Hungarian dissidents and intellectuals began to publish underground newssheets. It was at this time that my sister stopped coming home after work in the evenings. Relatives asked ‘is it a love affair’? My dad winked and proudly declared that ‘she is at a meeting’. Something was clearly stirring. And gradually people were becoming more open about stating their views in public. That is why when the revolution broke out we were not entirely surprised.

It began as a student demonstration of solidarity with striking workers in Poland. Before the day was out the people of Budapest were demanding the resignation of the Stalinist Government and the withdrawal of Soviet troops from Hungary. How did it feel? I still recall the powerful sense of exhilaration that swept people into the street, filled with excitement, confidence, hope and above all the feeling that just about anything was possible. I usually got told off when I returned home late but on the 23rd my family was far too preoccupied with the unfolding events to care too much about my misdemeanour. I was nine and a half but on that night and the weeks to follow I did not feel like a child.

We lived on Museum Boulevard, opposite the National Museum and just a couple of blocks away from the Magyar Radio building, where people gathered in the evening to demand that their 16 Points should be transmitted to the nation. My sister and I had barely left our house to join the crowd before we heard the sound of machine gun fire. Suddenly the carnival-like atmosphere that prevailed throughout the day disappeared, and my neighbourhood began to resemble a war zone. During the next couple of days it was difficult to figure out what was happening. Almost overnight thousands of civilians acquired arms and battles raged between them and the AVO – the secret police. Teenagers armed with Molotov cocktails and rifles were often in the forefront of attacking Soviet tanks patrolling the streets. My most shocking moment during that week occurred on Saturday 27 October. Walking with my father, we saw a crowd standing around the corpse of a young freedom fighter who was lying on the pavement just off Calvin Square. My father covered my eyes with his hands and ordered me to move on. In retrospect I think he was more disturbed by this young man’s death than I was.

The 20,000 Russian troops and their 1000 tanks that occupied Budapest failed to prevent the collapse of the Stalinist regime. On Sunday 28 October, a ceasefire was arranged and Moscow announced that it would pull out its troops from Hungary. On that day I was allowed to go to my local playground. But instead of playing, my gang of friends stood around discussing what we had seen of the revolution. Sporadic fighting still continued and we swapped stories about what was going on. We all had strong views about the meaning of these momentous events but agreed that from here onwards our lives would get better.

During the following week I saw little of my sister and father. My sister got involved with a group of medical students who were helping to co-ordinate emergency services. My father became a member of the Workers’ Council of the 5th District of Budapest and devoted his time to organising the delivery and distribution of bread in our neighbourhood. Our friends gave him the nickname Mr Kenyeres – bread man. On Sunday 4 November I went to the park and joined my friends in a game of football. That was the last time I saw them. I did not know at the time but on that morning a massive force of Soviet troops invaded Hungary. Within a week they succeeded in crushing the revolution.

During the week following the Russian invasion everyone seemed to be glued to their radio listening to Radio Free Europe, waiting to hear if the West would come to our rescue. However, soon it became evident that there was no knight in shining armour ready to help us. As euphoria gave way to demoralisation my sister took the initiative and declared that we could no longer stay in our home. We all knew that she was right, fearing that it was only a matter of time before my father would be arrested by the newly installed puppet regime. We did not tell anyone that we were going to flee to the West. And we left everything behind.

On the night of 21 November the four of us crossed the border to Austria. Between us we carried two sacks, a small suitcase and a lot of dreams. My sister was certain that she would become a surgeon. My mother looked forward to a life where she did not have to worry about someone knocking on our door in the middle of the night. My dad talked ceaselessly about all the books he was going to read. And I was preparing to meet my first cowboy. As we watched the stars in the black Austrian sky, the family was ready for the adventures to come. And to this day I derive strength and hope from the experience of October 1956.