These ‘January 6’ hearings are a farce

The Democrats’ attempt to portray the Capitol riot as an ‘insurrection’ looks increasingly desperate. 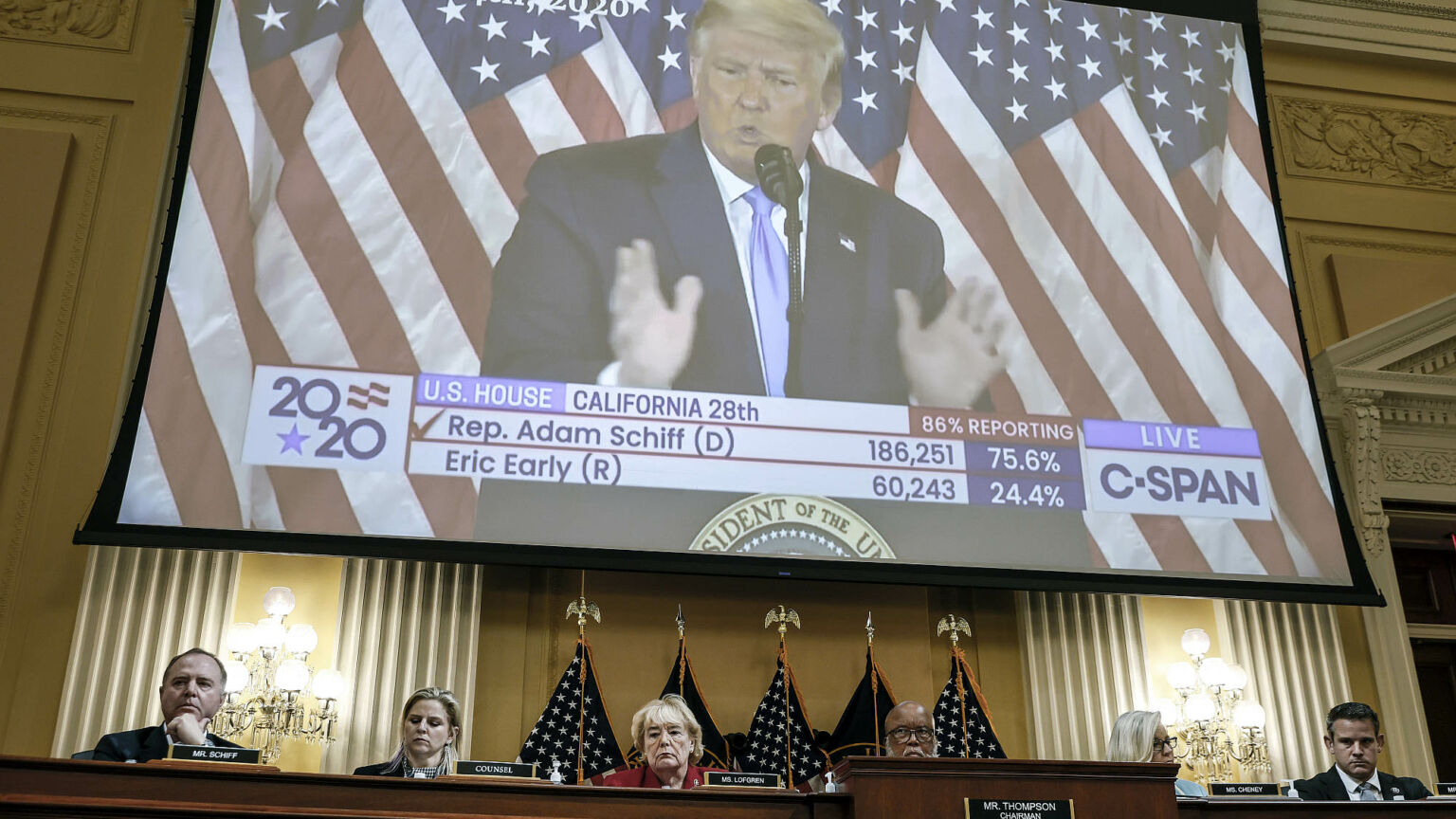 The House select committee investigating the Capitol riot in Washington, DC on 6 January 2021 began its hearings last week. So far these have offered a vivid reminder of Donald Trump’s disgraceful attempt to overturn the 2020 presidential election result. At the same time, the committee reminds us how the Democrats are incapable of convincingly prosecuting the case against Trump and winning people over to their side.

Since his removal from the White House, Trump has continued to insist, despite having no evidence, that the 2020 election was ‘stolen’ from him through mass voter fraud. During the first committee hearing, we learned that Bill Barr, the attorney general at the time, told Trump that the idea of a stolen election was ‘bullshit’. Trump’s legal advisers essentially came to the same conclusion. Yet he has continued to feed false claims of electoral fraud to his supporters.

The committee also provided more details about Trump’s lack of response to the Capitol riot. He declined to order the National Guard to assist the Capitol police, leaving vice-president Mike Pence to step in and do it instead. Regarding Pence, the committee reported that Trump was pleased to hear rioters chant ‘Hang Mike Pence’. Trump allegedly said that ‘maybe our supporters have the right idea’, as Pence ‘deserves it’. Trump was upset that Pence refused his (unconstitutional) demand to reject the certification of the election.

The committee has so far provided a damning indictment of Trump’s attempt to thwart an election result, and the disgraceful rioting in the Capitol. Yet Trump remains unrepentant. ‘[The riot] was not simply a protest’, he said after the first hearing, ‘it represented the greatest movement in the history of our country to Make America Great Again’.

But while this Democrat-led committee has further exposed Trump’s irresponsible behaviour, it is unlikely to deal him a political knockout blow. For a start, it seems that many are simply not that engaged with the proceedings. The Democrats tried to make the first hearing a big prime-time viewing event, broadcasting it on nearly all the national TV networks. But it was viewed by just 20million Americans on the night – far fewer, for example, than usually watch the president’s State of the Union address, which averaged over 40million viewers during the Trump years. As an editorial in the liberal Washington Post put it, the committee hearings look unlikely to ‘change hearts or minds’.

Democrats have only themselves to blame for the hearings’ likely failure to persuade many more Americans to turn against Trump. Nancy Pelosi, the Democratic speaker of the House of Representatives, set up the committee in an overtly partisan way. She broke procedural norms to reject the members selected by the Republican minority leader, Kevin McCarthy, and instead handpicked two anti-Trump Republicans, Liz Cheney and Adam Kinzinger. The bias of the committee is all too obvious. The Democrats clearly want to use the hearings to tar the entire Republican Party with the Trump brush – and no doubt distract voters from Joe Biden’s struggles, including an inflation rate of 8.6 per cent and $5-per-gallon gasoline.

But the Democrats’ inability to persuade the public of Trump’s wrongdoing runs deeper than the obvious partisanship of the committee. As they did during the Trump years, when they routinely labelled Trump a ‘fascist’, the Democrats continue to overstate their case. So, during the committee hearings, the Democrats have insisted on calling the Capitol riot an ‘insurrection’. That’s a wild exaggeration: the 2,500-or-so people who entered the Capitol on 6 January were unarmed, and right-wing political groups, like the Proud Boys and Oath Keepers, were hardly about to overthrow the US government. The riot did disrupt and delay the certification of the election, but it didn’t actually stop it from happening.

If anything resembled an ‘attempted coup’ (another over-the-top term the committee likes to use), it wasn’t the Capitol riot – it was Trump’s crazy attempts to challenge the vote results before and after the election. But again, the political system stood firm. The vice-president and his advisers in the White House refused to cooperate with Trump. And Republican state legislators rebuffed Trump’s demand to name new electors to the Electoral College vote. Trump has since lost 61 of the 62 electoral-fraud cases he has brought to various courts.

The Democrat-led committee is trying to establish that Trump was guilty of a crime – ‘seditious conspiracy’ – but that looks to be a stretch as well. Trump certainly encouraged his supporters to come to Washington (‘Be there, will be wild!’). And on 6 January he did urge them to march on the Capitol and then did nothing while they rioted – only later telling them to ‘go home’.

But while Trump bears some responsibility for what happened, his statements and lack of action do not amount to a criminal act. So far, the Department of Justice, which has filed seditious-conspiracy charges against members of the Proud Boys and the Oath Keepers, has notably avoided charging Trump.

What hinders the Democrats most of all in their attempt to finish off Trump is their self-evident double standards. They accuse Trump of encouraging the Capitol riot, yet they cheered on the BLM-led riots that followed George Floyd’s killing in May 2020. These were arguably far more destructive than anything seen on 6 January 2021. Indeed, the BLM-led riots in the summer of 2020 caused an estimated $2 billion in damages and left some two dozen dead.

The same double standards are at work when the Democrats claim that Trump’s fraudulent claims about the election have undermined confidence in the electoral system. They conveniently forget the fact that Hillary Clinton and her friends got there first, when they alleged that Trump’s 2016 victory was a product of Russian interference and therefore illegitimate. Their campaign to oust a democratically elected president, which culminated in the Mueller investigation, was as bad as anything Trump later tried. Democrats seem to have no idea how much of a beating their credibility took as a result of the dishonest Russiagate claims.

Indeed, the Democrats’ hypocrisy has been on full display during these new hearings. At the same time as the Democrats were denouncing Trump supporters for a physical attack on one institution of government (Congress), president Biden was conspicuously silent about the attack last week on another (the Supreme Court) and the foiled assassination attempt on Trump-backed Supreme Court justice Brett Kavanaugh.

What the ‘January 6’ hearings ultimately reveal is that Trump and the Democrats need one another. Both are stuck in the past, obsessed with the 2020 election and the riot in the Capitol. Most Americans do not share their obsession. They know that the problem they face today is not Trump, but Biden – whose approval ratings are even lower than those of his predecessor.

Most Americans have moved on from Trump, and are looking forward to moving on from Biden. It’s about time our politicians caught up with them.