Why we must override the Northern Ireland Protocol

The EU is refusing to renegotiate this wretched treaty. The UK government must act. 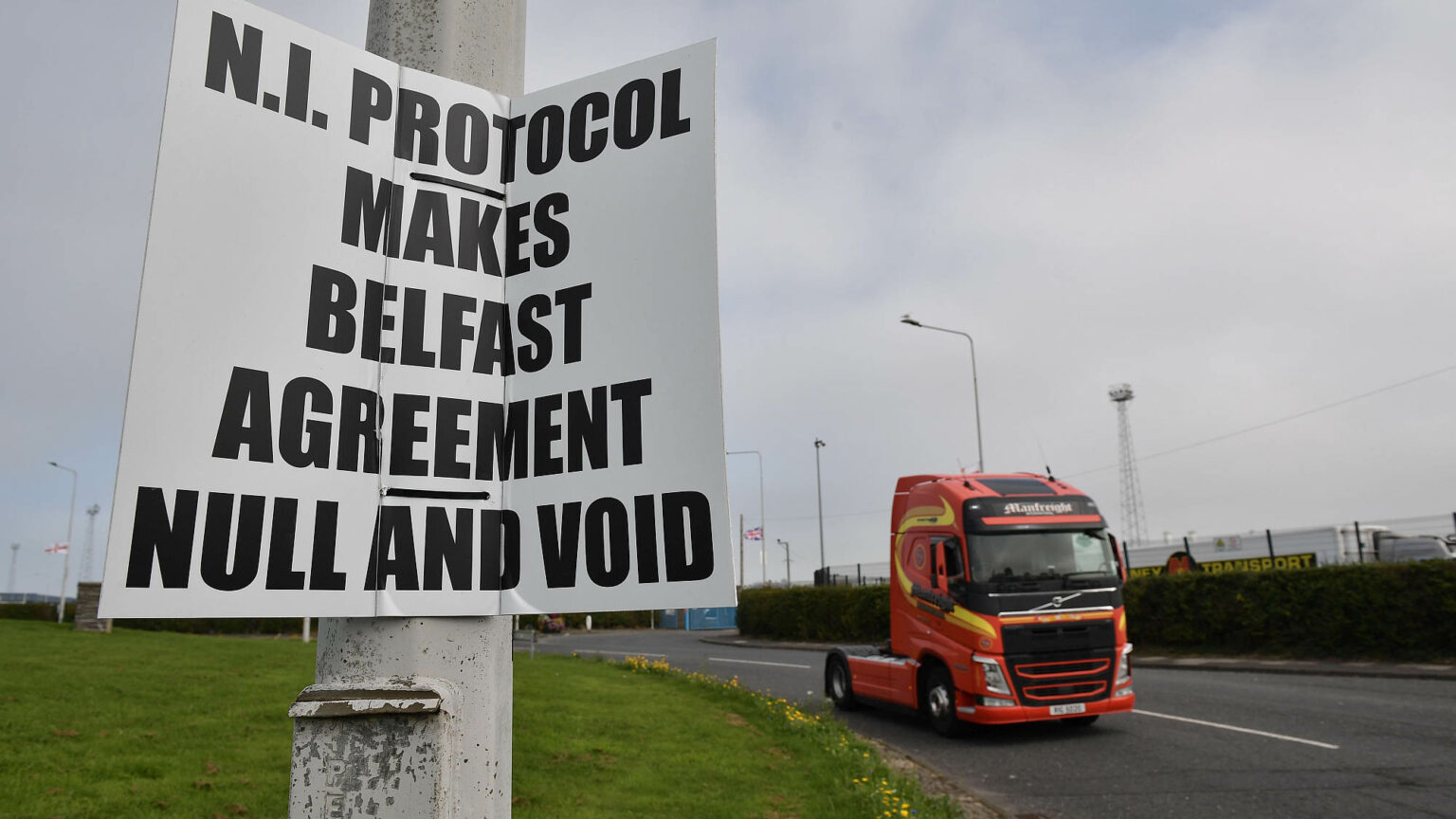 The Northern Ireland Protocol is about to go critical. Former Brexit minister Lord Frost has detailed how Boris Johnson’s government got itself into a position of agreeing a treaty with the EU that it knew was deeply flawed and why the government now wants to escape its damaging clutches. With the Democratic Unionist Party (DUP) coming in a clear second place in the recent Assembly elections and hence possessing the legal ability to prevent the operation of the Northern Ireland Assembly and executive, there is now a universally recognised political crisis. The DUP’s position is that we can have the Good Friday Agreement’s institutions or the protocol, but we can’t have both.

The UK government proposes to cut the Gordian Knot by unilaterally overriding parts of the protocol. The EU is resistant, however, and is demanding that the UK stick to its 2019 treaty agreement. Indeed, Brussels is now threatening a trade war with the UK in retaliation, although it may lack enough support from member states to achieve much.

The Northern Ireland Protocol protects the EU Single Market by erecting a full customs border in the Irish Sea between Great Britain and Northern Ireland, and by imposing a full raft of EU commercial regulations on goods produced inside Northern Ireland. It also puts limits on how VAT rules and production subsidies can be changed within Northern Ireland and makes the European Court of Justice the final arbiter in any disputes. All of this was to avoid erecting any customs infrastructure at the land border on the island of Ireland.

The cabinet is expected to sign off this week on a plan to introduce new legislation giving powers to UK ministers to override important parts of the protocol. The legislation will be published within weeks and then sent to parliament. It will prove highly controversial at every stage and is likely to provoke retaliation from the EU. The main push to supersede the protocol is coming from foreign secretary Liz Truss. She is said to be backed by the prime minister, although no one can be certain about how solid this backing will prove. The attorney general, Suella Braverman, a determined Brexiteer, has ruled that such legislation will be legal despite the fact that the protocol is enshrined in a treaty.

Elsewhere within the UK government, support for overriding the protocol is less forthcoming. Chancellor Rishi Sunak and Levelling Up secretary Michael Gove are said to be lukewarm at best over changing it. And the Treasury is doing its job in spelling out the potential dangers of a trade war or other forms of EU retaliation. One nightmare would be tariffs on vehicle exports to the EU, which would endanger car plants in Sunderland, Derbyshire and elsewhere. The government’s biggest difficulty will be getting the legislation through a Remainer-dominated House of Lords, but the senior lawyers in the Lords seem to be less opposed than many suppose.

The legislation will most likely enact the terms of the 2021 command paper written by Frost and Johnson’s foreign-policy adviser, John Bew, himself from Northern Ireland. It will prevent or greatly diminish customs administration and checks on goods from Great Britain to Northern Ireland (as a final destination). Northern Ireland firms not exporting into the Republic would be able to adhere to UK rather than EU regulations. The UK would have freedom to set VAT rules for Northern Ireland and the whole package would be adjudicated by an independent arbiter and not by the European Court of Justice, which is the judicial arm of the EU.

The key demand of the EU to protect the Single Market from illegal imports would still be respected under the government’s proposals, because the UK would make it illegal to export any goods into the EU which fail to fully observe EU import rules. There would be no UK customs checks on the land border and no need for Irish checks. If the Irish reciprocated with equivalent arrangements, then this would constitute a system of mutual enforcement of customs rules by each side.

There is no reason why this framework should not be able to deal with the tiny amount of trade crossing this part of the EU’s trade border. But the EU does not see it this way. Having agreed customs arrangements in Ireland which are completely satisfactory to itself, to the Irish government and to Northern Ireland’s nationalists, the EU sees no reason to change them.

The EU’s problem is that it took advantage of the disarray in the UK parliament in 2019 to push through an agreement which was bound to greatly annoy Northern Ireland’s Unionists. In doing so, it ignored the basis of the Good Friday Agreement that all major decisions require cross-community consent. Yes, Unionists express worry over the economic effects of the protocol, but their principal concerns are constitutional, over the future of the Union itself. And no wonder – as it stands, the current customs border in the Irish Sea splits Northern Ireland from the rest of the UK, while creating a seamless land border that could provide a basis for future Irish unity.

It is for this reason that all of Northern Ireland’s disparate Unionist parties oppose the protocol and want to see the UK government take unilateral action to replace it.

Meanwhile, various predictable political manoeuvres are taking place. Johnson has visited Belfast to urge the parties to set up the Assembly, knowing full well what the DUP wants. Sinn Féin complains that the DUP is holding Northern Ireland to ransom over the protocol, which ignores the fact that Sinn Féin also refused to allow the Assembly to function between 2017 and 2020 over first minister Arlene Foster’s refusal to step down over a financial scandal. Assorted Remainers stress the need for an operational Assembly to deal with Northern Ireland’s embarrassingly long NHS waiting lists, without noting that it is the Assembly which got Northern Ireland into this situation in the first place. American Democrats demand the protocol be retained to preserve the Good Friday Agreement when it is the protocol that has undermined the GFA.

All in all, another fine mess – but one that the UK government could be about to get a grip on.