The incoherence at the heart of NATO

It spent years stoking a conflict with Russia it had no intention of fighting. 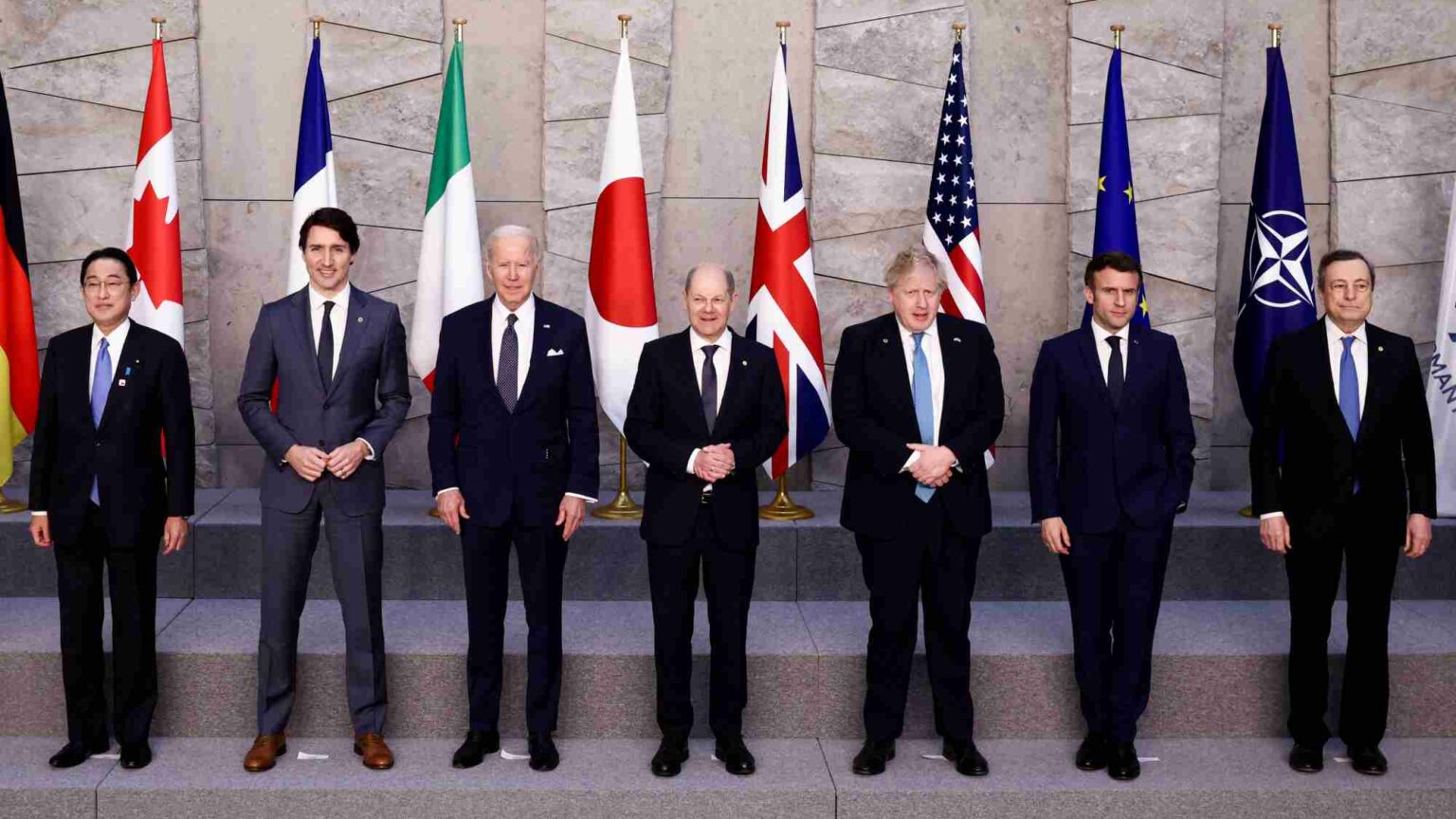 Some seem to believe that the war in Ukraine has galvanised Western alliances. In particular, they argue that Russia’s act of aggression has given that hoary old Cold War institution, NATO, a renewed sense of purpose, reversing decades of drift and division. As US president Joe Biden declared after last week’s NATO summit, ‘Putin was banking on NATO being split – NATO has never, never been more united than it is today’.

That was certainly the impression NATO leaders wanted to give (footage of Boris Johnson looking lost and alone aside). Unity. Commitment. Purpose. NATO leaders talked of imposing ‘unprecedented costs on Russia’. They pledged to pour more weapons – and upgraded ones to boot – into Ukraine. And Biden himself seemed to be on a one-man escalation mission, threatening both regime change in Moscow and to respond ‘in kind’ to any Russian chemical-weapon use.

Yet appearances can be deceptive. Unnamed Western sources at the summit briefed reporters with messages that ran contrary to the official line. It was ‘highly unlikely’ that NATO would intervene further if Russia used chemical weapons, said one. There was a real ‘fear of Russian retaliation’, said another.

NATO’s position really wasn’t as clear as it looked. Johnson said this approach was one of ‘constructive ambiguity’ – in other words, keep the enemy guessing. But he was giving it too much credit. For what was on display at the summit, and then during Biden’s whistlestop tour of NATO’s East European outposts, was not so much NATO’s unity and purpose as something else – its profound incoherence.

Just listen to how confusing NATO’s approach is. It boasts of its decision last week to pour more weapons into the conflict zone, building on NATO secretary-general Jens Stoltenberg’s pledge to Ukraine to do ‘all it takes to protect and defend all allies’. And yet it claims it doesn’t want to get involved in the conflict for fear of escalating it.

The contradictions of NATO’s approach are myriad, but they have a clear, root cause: Western powers have continually, almost unwittingly, stoked a conflict with Russia they do not want to fight. And now, thanks to Putin’s barbaric attempt to erase Ukraine’s nationhood, they find themselves engaged in a war they don’t want to wage.

None of this has been conscious or part of a deliberate strategy. No, this incoherence is the product of NATO’s reckless, self-contradictory post-Cold War development – an unwittingly offensive expansion of a supposedly defensive military alliance.

This began in the 1990s, as former Warsaw Pact nations demanded and received admission to NATO – a prelude to EU membership. And it developed at pace during the 2000s, as former Soviet republics were also brought into the NATO fold. And all the while this expansion was aggravating the Russian threat, by intensifying the national chauvinism and militarism of Russia’s increasingly insecure ruling clique. So much so that NATO has had to manage the Russian threat its own actions have created through the increasing militarisation of its ever expanding eastern borders. Which of course has only further inflamed tensions – with each response to Russia’s own military reinforcement prompting a counter-response. And so a conflict has steadily simmered, before Russia’s naked act of aggression brought it to boiling point last month.

Ukraine has long been at the centre of this growing antagonism. Russian diplomats, and many Western diplomats too, had always warned, from the collapse of the USSR onwards, that Ukraine becoming part of NATO was a ‘red line’ for Russia. But that didn’t stop Western leaders from flirting with the prospect, as part of the logic of NATO’s European expansion. So in 1994, Ukraine became the first post-Soviet country to conclude a framework agreement with NATO in the shape of the Partnership for Peace initiative. At a NATO enlargement summit in 2002, Western leaders came up with a NATO-Ukraine Action Plan. And at the Bucharest summit of 2008, NATO explicitly declared that Ukraine would become a member.

But what’s telling is that on the eve of the Russian invasion, and 14 years on from that infamous declaration, NATO was still yet to give Ukraine an official ‘membership action plan’ – the formal procedure that leads to NATO membership. There have always been conditions that Ukraine has to meet, reforms it has to undertake. As recently as last June, for instance, Stoltenberg said that Ukrainian politicians ‘had to continue to modernise and refine their defence and security institutions, civilian-political control over their security services, and [fight] corruption’.

NATO’s incoherent approach to the war in Ukraine has a clear precedent, then, in its incoherent approach to the question of Ukraine’s NATO membership. And for the same reason – because NATO is always stoking conflict with Russia with one hand, while gesturing its unwillingness to fight with the other. So having tempted successive Ukrainian governments with the prospect of NATO membership, NATO has baulked at the potential consequences – especially after Moscow showed its aggressive intent by annexing Crimea in 2014.

And so NATO has come towards Ukraine, while simultaneously backing away from it – as it still appears to be doing right now. Yes, the carrot of NATO membership is still being dangled. Even as Russian tanks amassed on the Ukrainian border two months ago, US secretary of state Antony Blinken was still holding the door open. But few, Ukrainian president Volodymyr Zelensky included, think Ukraine will ever be allowed to enter.

Ukraine’s fight for national survival has not so much galvanised NATO as exposed its weakness. It remains what it was after its Cold War purpose evaporated – a destabilising, incoherent force.