The left vs the people

The truckers’ protests have exposed liberals as authoritarians and leftists as enemies of the working class. 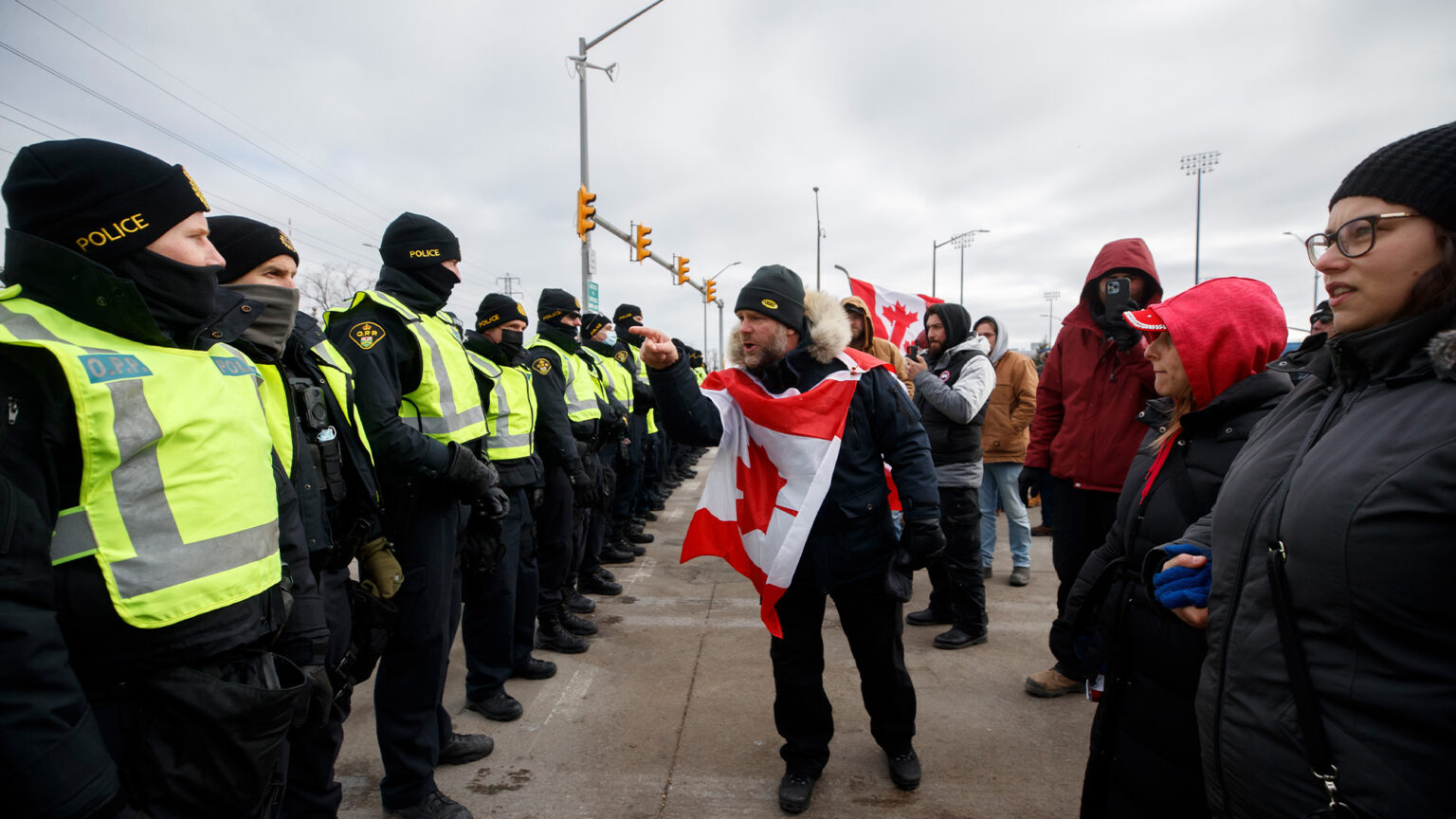 It’s been quite a few weeks for our neighbours to the north. Three weeks ago, a ragtag, grassroots campaign of disgruntled truckers made their way to the Canadian capital to protest a government vaccine mandate. As of last night, two of the organisers of what has been, by all accounts, a peaceful protest have been arrested, giving Canada – a country that bills itself a democracy – its first political prisoners in recent memory.

On Thursday, Chris Barber was arrested, while Tamara Lich had her personal bank account frozen and was detained on a charge of ‘aiding and abetting mischief’ – a trumped-up charge resulting directly from a naked power grab by Canadian prime minister Justin Trudeau.

Instead of meeting with his citizens to hear their demands, Trudeau has spent the past three weeks smearing them as hateful and violent. On Monday he became the first Canadian leader to invoke the Emergencies Act – giving his government a series of draconian powers. Without one iota of evidence that the ‘violence’ of the truckers’ protests has ever exceeded honking, Trudeau broadened the scope of Canada’s anti-money-laundering and terrorist-financing rules, putting the striking truckers on a par with terrorists, suspending their civil liberties and allowing banks to freeze the personal accounts of anyone linked to them. Now Trudeau is having them arrested. And on Friday morning, he cancelled a parliamentary session in which his edict was due to be voted on, and could have potentially been revoked, by the House of Commons or the Senate.

The truckers’ protest began with Trudeau smearing the truckers as Nazis and fascists – a line gladly repeated, day in day out, by reporters and pundits in the elite liberal media. It is now ending with those same elites cheering on Trudeau’s authoritarianism.

Although the media have promoted Trudeau’s falsehoods and cheered his overreach, many Canadians see the protests for what they are. The Canadian Civil Liberties Association is taking the federal government to court for invoking the Emergencies Act. ‘It’s possible for protests to be both disruptive and peaceful’, Noa Mendelsohn Aviv, its executive director, rightly argued. Others have pointed out Trudeau’s hypocrisy. In 2020 the Canadian PM threw his support behind both Black Lives Matter’s disruptive protests and protesting farmers in India who were blocking major highways. ‘Canada will always be there to defend the right of peaceful protest’, Trudeau said back then.

How things have changed. Instead of defending the right of peaceful protest, Trudeau has tarred it as terrorism and has seized the personal bank accounts of his political adversaries.

It’s a terrifying development for a country that calls itself a democracy to use such excessive means to quash dissent. Even going by Canada’s own laws, Trudeau’s invocation of the Emergencies Act is surely unconstitutional, as it requires a ‘national emergency’ so serious that it cannot be resolved by any other means. Trudeau has not met with the truckers even once to attempt to defuse the situation, so how could he possibly know that he couldn’t resolve the emergency any other way?

Trudeau’s astonishing move came after he spoke to President Biden last week, who demanded harsher federal action against the truckers who were at the time blocking the Ambassador Bridge, a major artery in US-Canadian commerce. In the fight between democracy and commerce, Biden chose commerce. And Trudeau obliged. The police went on to clear the bridge over the weekend – before Trudeau invoked the Emergencies Act, it bears pointing out.

President Biden also had his Department of Homeland Security – a department that was established to fight terrorism – on high alert in case of ‘copycat’ protests in the US. And across liberal media, there has been incredulity at Trudeau’s hitherto reluctance to deploy authoritarian opposition to the protests. The same elite liberal media that, back in 2020, showed us burning buildings behind chyrons reading ‘Fiery but mostly peaceful protests’ now shows us footage of bouncy castles, community kitchens and truckers in makeshift hot tubs, while describing this as ‘insurrection by airhorn’, ‘a threat to democracy’ and ‘sedition’.

As Trudeau actually suspends democracy, America’s elite liberal media have projected that travesty on to his victims.

When did liberals become the side demanding the suspension of civil liberties? When did the left start to oppose the working class? What liberal can watch a video of a woman being arrested for organising what remains a non-violent protest and say, ‘I stand by that?’.

The truckers’ convoy keeps revealing uncomfortable truths for those in power, like the fact that the divide over Covid restrictions is a class divide – between the elites, who work from home, and continually demand more restrictions on workers.

Civil liberties are apparently something only people with money deserve. If you’re working class, the government reserves the right to seize your bank accounts. Big Tech reserves the right to steal donations made to you and redistribute your money to causes it deems more worthy. Journalists reserve the right to call up private citizens on the phone and demand to know why they gave 40 bucks to some working-class truckers freezing their buns off in the Canadian winter. And rich liberals are cheering all this on, from the safety of their homes, of course.

The left is now on the side of power. Liberal media are on the side of the government and they take political dissent personally. And what leftist elites are doing with their power is setting a new standard for who deserves basic civil rights. If you’re working class and spent the pandemic braving the plague and delivering food to their doorsteps so they could stay at home tweeting, you can forget about your rights. Whatever money you have left in your coffers is theirs for the taking. If the pandemic began with the greatest transfer of wealth from the lower classes to the rich, political power and civil rights seem to be following. The elites are sending a clear message: civil liberties are the exclusive rights of the pyjama class now.

If the past two weeks have taught us anything, it’s how hollow the accusations from elite media leftists should ring, how quickly accusations of fascism are followed by the cheering on of political arrests, and how deep their projections run. It has revealed how quickly support for dissent and peaceful protest evaporates when it threatens those in power. And it has told you exactly who has that power.