The sci-fi classic was inspired by environmental predictions that have signally failed to materialise. 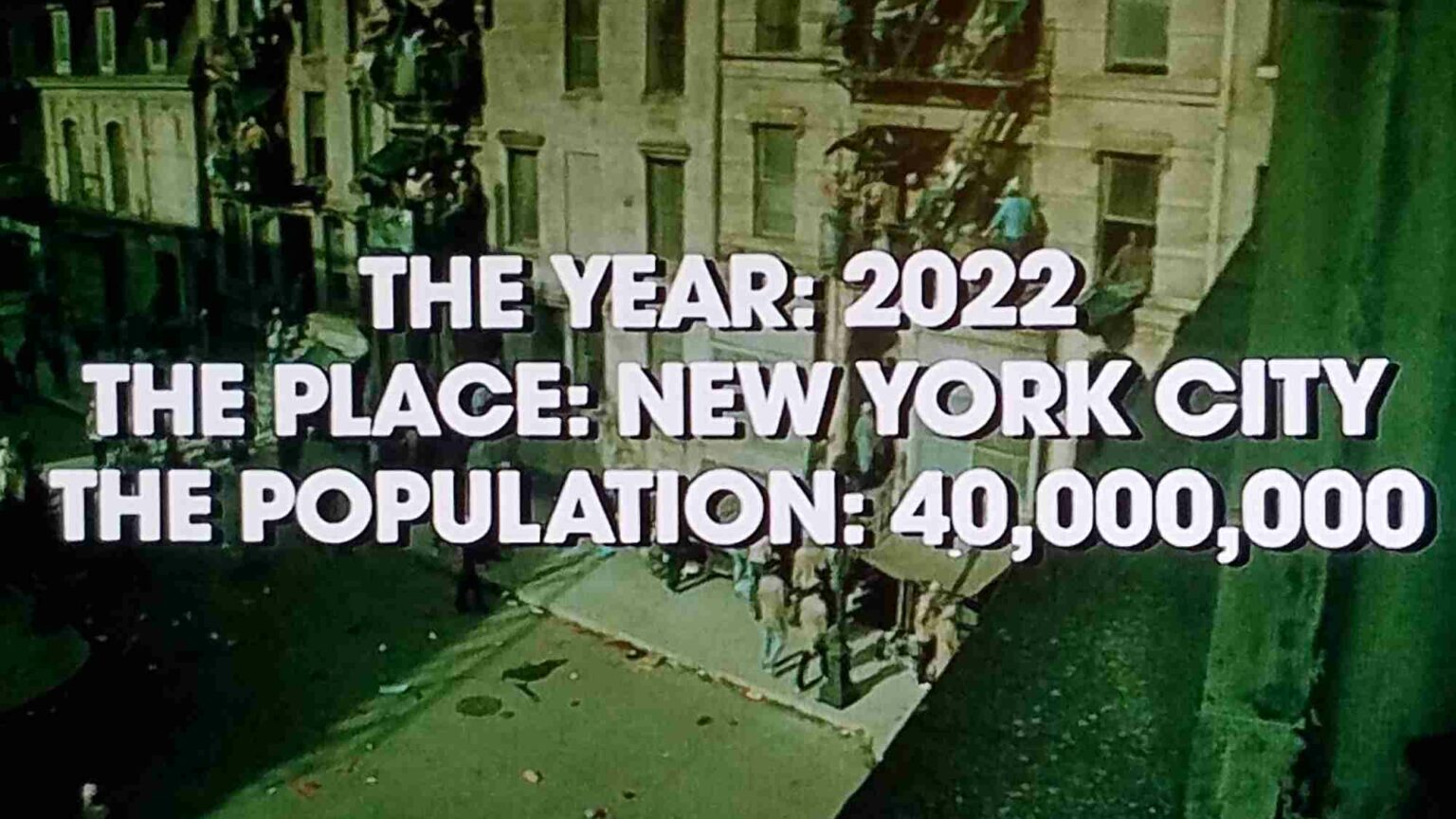 That is the anguished final cry of police detective Frank Thorn in legendary ecological thriller Soylent Green. Set in a decaying future world, ravaged by pollution, global warming, resource depletion and overpopulation, the plot follows Thorn (played by Charlton Heston) as he makes a sickening discovery: that a new wonder food, the eponymous Soylent Green, is actually human flesh.

The film was made in the early 1970s, when the twin fears of rapidly rising populations and temperatures were first coming to the boil, and it was set far enough in the future for all manner of fanciful predictions to be made. So when exactly did the filmmakers imagine environmental collapse would reduce us all to this state of barbarism? According to the Hollywood blockbuster, starving humans would be resorting to cannibalism in the year… 2022. Yes, we’ve already arrived.

Of course, Soylent Green was sci-fi fantasy, not a scientific forecast of the future. Yet this isn’t how the progressive press has been commemorating the film this year. According to a recent Washington Post feature, ‘Soylent Green envisioned the world in 2022. It got a lot right.’ Apparently, the movie was most right about today’s ‘climate catastrophe’. Another review draws the same conclusion: ‘The most 2022-resonant notes in the film are connected to the way it shows a catastrophic collapse of a society that’s choked out nature… when the threats we currently face due to the climate crisis feel real within the confines of the movie.’

Really? What planet do these writers live on? Certainly, we have got a serious pandemic and political problems aplenty to contend with. But where on Earth is society collapsing due to catastrophic climate change?

‘Madagascar!’, environmentalist George Monbiot recently proclaimed in the Guardian. According to Monbiot, ‘The famine harrowing Madagascar at the moment is the first… likely to have been caused by the climate emergency. It will not be the last.’ Ironically, Monbiot’s confident claims came two weeks after the Guardian had itself reported that ‘Poverty, not climate breakdown, caused Madagascar’s food crisis’.

A great number of people seem convinced that in 2022, civilisation is coming apart at the seams thanks to climate change, despite having to look quite far afield to find much evidence of this. As awful as hurricanes, wildfires and famines in faraway places may be, they do not presage global societal collapse. Nevertheless, the dystopian nightmare of the kind portrayed in Soylent Green is talked of by environmentalists as a realistic consequence of climate change. We are, as one newspaper put it during the COP26 climate talks, ‘still on the road to hell’.

The origins of environmentalism’s dystopian mindset can be traced back to the doom-mongering about overpopulation of the 1960s, and in particular biologist Paul Ehrlich’s influential 1968 bestseller, The Population Bomb. In this bible of over-the-top catastrophism, Ehrlich described the inevitable ‘mass starvation’ we faced on ‘a dying planet’ that Soylent Green so graphically passed on to a wider popular audience. Over five decades later, and the picture painted in Ehrlich’s miserabilist book still colours the thinking of the mainstream environmentalist movement, where it seems as if nothing positive is possible for the future, only hardship, suffering and death.

Yet although a lot has changed in the past 50 years, society hasn’t collapsed in the way that Ehrlich predicted (and as most environmental alarmists still predict it will). Instead, for most people in most places, things are now measurably better. From the massive plunges in child mortality and extreme poverty to the steep upswings in health, education and life expectancy, human flourishing has increased not diminished over the long decades since the Population Bomb first hit the shelves and Soylent Green first hit our screens. And as for fears that a growing population would struggle to cope with scarce resources, the world is actually hundreds of times more abundant today than it was in the 1970s. Even the alarmist BBC, when not issuing dire warnings that it’s ‘foetal-position time’, occasionally remembers to report the many reasons why the world is actually improving.

All of these gains are happening despite the human population doubling since the early 1970s, from under four billion people then to nearly eight billion now. Contrary to the grim vision of ever-increasing starvation and malnutrition set out in The Population Bomb and Soylent Green, it is obesity, diabetes and other ‘diseases of affluence’ that are spreading around the globe.

Of course, this doesn’t mean we now live in a panglossian ‘best of all possible worlds’. Food insecurity remains a very real threat for many millions of the world’s people. But as today’s famine hotspots in Yemen, Afghanistan, Ethiopia and indeed Madagascar clearly show, this is due to politics not environmental collapse.

None of this is to say that climate change is not a serious problem. But the environmental apocalypse has been predicted in the past and has clearly failed to materialise. It is also darkly ironic that those who bought into Soylent Green’s far-fetched tales of imminent ecological collapse half a century ago are now grandparents to teenagers similarly convinced the world will end within their lifetime. What’s less amusing, is that a debilitating ‘climate depression’ is spreading among the young (that is, among those not yet aware that, according to environmental campaigners, the end is always nigh, always has been and always will be).

The actual course of history, in contrast to the green doom-mongering, shows the power of human ingenuity and innovation. Instead of ‘hundreds of millions of people’ starving to death in the 1970s, as Ehrlich predicted, before ‘an utter breakdown of the capacity of the planet to support humanity’ by the 1980s, we got the technological marvel of the agricultural Green Revolution, which allowed us to feed the world’s expanding population. (Despite Ehrlich’s predictions being spectacularly wrong, he still insists that the ‘collapse of civilisation is a near certainty within decades’.)

It’s worth noting how Ehrlich (and the makers of Soylent Green) assumed human beings would simply descend into barbarism and despair when faced with environmental challenges. Contrast this with the practical actions, from exactly the same era as the Population Bomb, of industrialist and movie mogul Arthur Rank. Rank, too, was concerned about overpopulation and starvation, but his solution wasn’t simply to wail and moan. Rather, he began to search for a new source of plentiful food. The result was Quorn, a mycoprotein made from fungus that has since become a favourite of vegetarians.

While fungal mycoprotein isn’t quite the saviour food that Rank hoped, there are plenty of other up-and-coming innovations that could be. Modern biotechnology especially has the potential to revolutionise food production once again, at the same time as reducing its environmental impact and carbon emissions. Yet who is most opposed to such Earth-saving technology? The very environmentalists who shout most loudly for immediate solutions to the ‘climate crisis’. You couldn’t make this up. Greens’ opposition to nuclear power, the most efficient carbon-neutral power source we currently have, is similarly counterproductive.

It goes without saying that a world without the threat of climate change and the environmental harms it threatens is one worth striving for. It’s also one that’s possible – just that it is more likely to come from innovation and ingenuity rather than from the activism of eco-alarmists. Eco-catastrophism has led nowhere except to the impotent apathy of today’s climate-depressed children (and along the way to the hideous repression of China’s one-child policy and the mass coercive sterilisation of millions in India and elsewhere in Asia).

There are more positive paths to saving the planet. The polarised either/or of climate catastrophism vs climate-change denial are not the only options. From the skeptical environmentalism of economist Bjorn Lomborg and the rational optimism of science writer Matt Ridley to the eco-pragmatism of counterculture icon Stewart Brand, other more reasonable and realistic alternatives can readily be found.

In discussing the role of modern genetic biotech, for example, Brand enthuses about how the ‘conservation story could shift from negative to positive, from constant whining and guilt-tripping to high fives and new excitement’. (Paul Ehrlich, not surprisingly, is a biotech nay-sayer.)

Half a century of history has repeatedly shown the environmentalist movement’s worst predictions to be far off the mark. That doesn’t mean, of course, that things must inevitably continue to improve. As the shocking unexpectedness of Covid illustrates, the future is hard to predict. In another 50 years time, in 2072, the world might well be a whole lot worse. But here’s one thing you can bet your bottom dollar on – that eco-catastrophism won’t make it any better.