The scapegoating of Novak Djokovic

Too many have taken grim satisfaction in the tennis star’s woes. 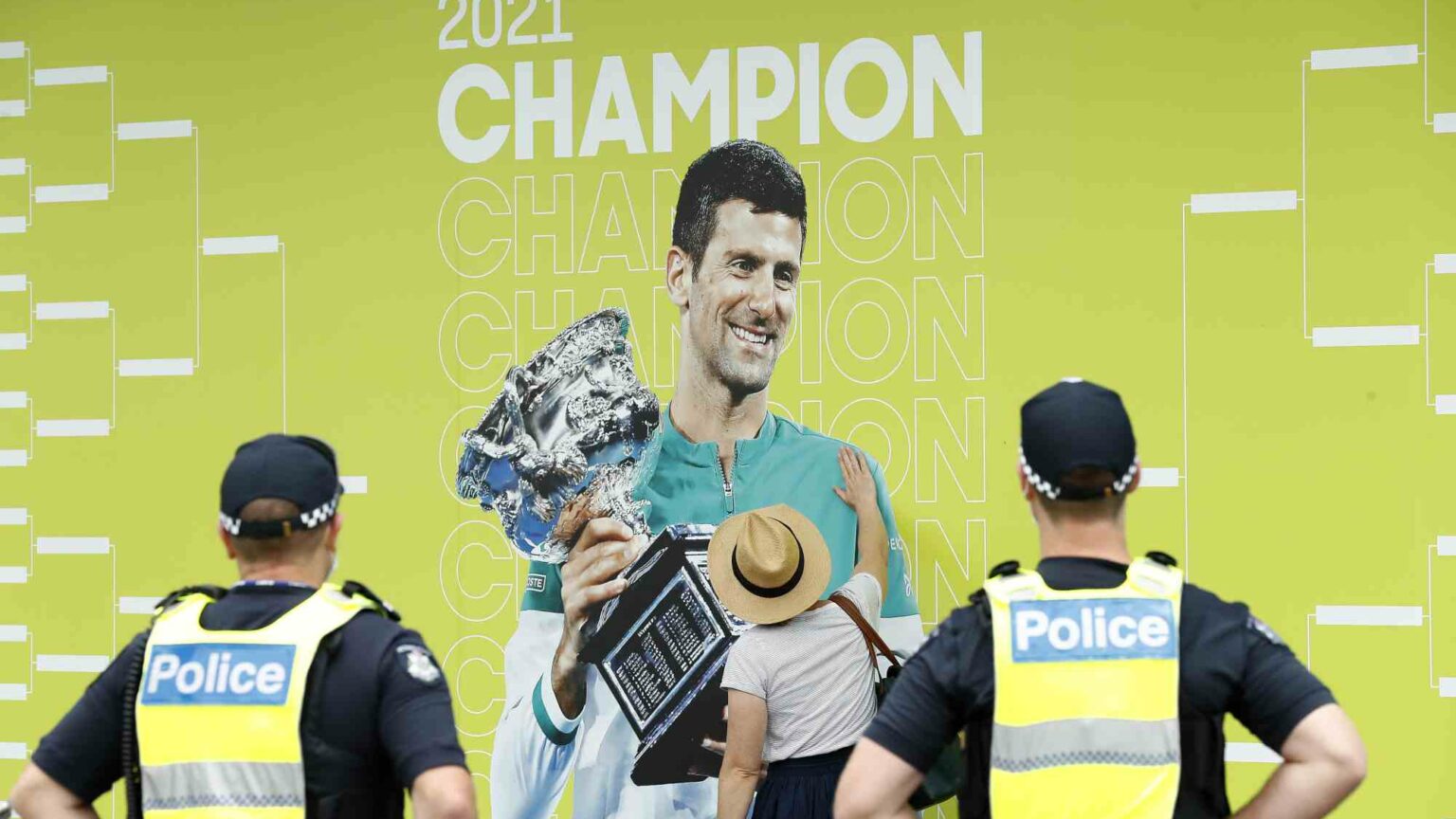 As dusk settles over the Novak Djokovic affair, and the Kookaburra of Minerva finally takes wing, what have we learned?

Very little about any threat Djokovic, or the unvaccinated generally, may or may not present to the health of Australians, the wee, sleekit, cowrin, tim’rous beasties.

Unvaccinated, Djokovic has twice caught the thing, both times shrugging it off like a shoulder twinge in the fourth set. He last tested positive in mid-December, whereupon he did the One Bad Thing that does stick, albeit hardly extraditable, and talked to a journalist.

He is now brimming with more antibodies than the most triple-boosted of his competitors. That he is now clear is uncontroversial. His internment made sure of that much, at least, albeit to no one’s ultimate advantage. The temperance movement is throwing out an empty bottle.

And we’ve learned very little about the rule of law in Australia. The hierarchy of judicial authority that exists between the courts, the tennis authorities, the newspapers and the politicians seems to have been settled, to no one’s great surprise, in favour of the prime minister, Scott Morrison, and his immigration minister, Alex Hawke.

The back-to-the-net, through-the-legs legal trick-shot, attempted even as Novak’s body was past the horizontal, the shot that Team Djokovic hoped might just drop the other side of the net, came to naught. Though when Djokovic first appealed against the cancellation of his visa, a week ago, the courts sided with him. But on Sunday, they refused to overturn the minister’s decision. This suggests that most of what passed in the interim was play acting, or what trainee barristers call ‘mooting’.

Whether this was, as suggested by former prime minister Kevin Rudd, exactly what Morrison wanted, in order that he be able to posture not once but twice as the indefatigable defender of his nation’s shores, is itself moot. But, like Novak at the net, I wouldn’t put it past him.

Many people who might usually a) despise Morrison’s brand of populist machismo, and b) deplore the quashing of legal verdicts by posturing autocratic politicians in election year, are quite happy, it seems, to see the Australian PM lift the cup on this occasion. Quashing vaccine heresy now trumps most other considerations – we have at least learned that.

The grumbling nature of the final verdict – that the ban was upheld on ‘health and good order’ grounds – might however linger, unpleasantly, in the air. It suggests that Djokovic was being refused a visa at least partly on similar grounds as might a David Icke or a Tommy Robinson – because there was a whiff of the troublemaker about him. Because he was a threat to the moral purity of the people, rather than their respiratory systems, and to the placidity of the public square. He was thought by Hawke to be capable of fanning ‘anti-vaccination sentiment’. This, despite Djokovic never having uttered anything approaching ‘anti-vax’ sentiment, beyond admitting his own preference for remaining unjabbed, and his rather quaint adherence to some homoeopathy-adjacent eye-wash generally more popular in the Brighton Lanes than on the Pro-Circuit.

It is ever more inconveniently clear that the present, dominant iteration of the virus presents very little threat to healthy young people. It caused Novak about as much distress, it would appear, as eating a sausage two days past its best-before date would cause an otherwise healthy Alsatian. In that regard, even on public-decency grounds, his deportation is more like preventing Elvis Presley being filmed from the waist down, than barring a visit from Identity Evropa. Serbia should cast him in a remake of Footloose.

Australian chief justice James Allsop himself emphasised, seemingly through gritted teeth, that in upholding the cancellation of Djokovic’s visa, the court’s decision was based entirely on whether the immigration minister had the legal right to do what he had done, rather than on the ‘wisdom or merits’ of that decision. That suggests to me the principle, if not this case, is still up for debate. I hope so.

One thing we certainly seem to have learned, if it had escaped us until now, is just how raw the bones of humanity are. And not just Australian humanity, either.

The sheer, undigested joy, the unmistakably bilious, pinched, grim satisfaction taken on social media, relishing Djokovic’s woes, have made it clear that sending him home is the very least a lot of people wanted to see. Strung up by his ankle from a decent-sized boab tree would have been more like it, really, so that his dangling form might present a pleasing silhouette against an iconic desert sunset, and a warning to any other jackal or coyote minded to try its luck. That’s how we treat anti-vaxxers ’round these parts, boy.

The small-minded regulatory instincts of men in uniform, who wear shorts and long socks and highly polished brogues to mitigate the heat, have carried the day. Never annoy the authorities in a country where they spend their time slapping flies off the backs of their necks.

That much is familiar to anyone who has watched Cool Hand Luke in their youth and then grown older and wondered whether maybe vandalising parking meters really isn’t such an easily forgivable transgression after all.

I have always felt that the casual, lazy joke that Australians are descended from convicts is wide of the mark. It’s the ones that are descended from the guards you’ve got to watch. But nearly two years of seemingly incoherent, ad hoc, patchwork and reactive policies, swinging erratically like a double pendulum and imposed with a force and moral coercion in inverse proportion to their evident legitimacy, have left the entire world feeling like stressed-out, stand-in, underpaid prison guards. Like they’ve been exposed to one of those notorious social-psychology experiments conducted in the Sixties by the likes of Stanley Milgram. Indeed, anyone disappointed by the replication crisis and its impact on Milgram’s legacy now has a much wider-ranging study to look at.

Around the world, governments have supposedly been ‘following the science’. Yet their citizens and subjects have rarely found that this plays out the same from one county to the next, let alone across state lines and international borders. And nowhere has that conflict been more obvious than in Australia. Morrison can say that the Australian people ‘have made many sacrifices during this pandemic’ as if to suggest consensus, but that cannot conceal the brutal imposition of the will of the state – and the chafing many have felt.

Very likely there were irregularities for which Djokovic himself is culpable, though not to any degree that would under normal circumstances have been ineradicable. Inaccuracies in his application form, I am inclined to forgive, as I managed to very nearly create a diplomatic incident myself recently when visiting the Channel Islands to perform in a comedy show. Landing in Guernsey that afternoon, I found myself immediately siphoned off from the customs queue into a cubicle staffed by a young woman in a hazmat suit, given a PCR test and told to self-isolate for up to 48 hours until the results came in. Given I was supposed to be on stage that very evening, I assumed this was some sort of performative nonsense that the promoter would tell me to ignore. But no, he went into full-on panic mode. It turned out that the night before, I had accidentally ticked the wrong box in one of the 18 online drop-down menus I’d had to fill out, and had gaily announced that I was arriving not from England but from France.

Guernsey being a bit smaller and less scratchy than Australia, and my detention being less of a political hot potato, this was quietly sorted, and I enjoyed a mere couple of hours in quarantine before signing an affidavit to say it was an honest mistake, had a rudimentary LFT and was in the wings half an hour before curtain up. I am very grateful that a ‘let’s make this happen’ attitude prevailed.

But that would never have done in Australia, with the present appetite for blood. What many of the Australian people now wanted to see was an actual sacrifice, and not of one of their own.

Djokovic is not just an extraordinary sportsman, who enjoys and maintains a phenomenal level of fitness while also nurturing rather unconventional beliefs. He is also a proxy. He is one of ‘them’, the lot who think they’re above all this, and better than us. And his punishment is the necessary proof that we have not been made fools of, to no purpose.

True, he is not a Dominic Cummings, who was perceived, albeit wrongly, to have arbitrarily made the rules, and then sought to escape their implications – this charge being in fact a palimpsest, written on the hastily erased previous charge sheet, made out with regard to Brexit.

Nor is Novak an anonymous Westminster (or Canberra) wonk, telling us we couldn’t visit dying relatives or host more than a single friend in our own back gardens, before dragging suitcases of booze back from the local Co-op to enhance a work event or two.

All he’s done is be one of the greatest tennis players of all time, with some mildly cranky ideas about bodily autonomy and what works best for him that, annoyingly, seem to be working quite well for him so far. But that is enough to kindle a degree of Schadenfreude in some people, watching him brought down by this tangle of Lilliputian twine, that I’d be ashamed to feel seeing Jeremy Corbyn detained at Ben Gurion airport on his way to a Hamas BYOB.

Understandable though it is, this is not a good trajectory for humanity to be on. So, I would gently counsel against warming your hands over this. Djokovic hasn’t imposed any of these regulations, or indeed encouraged anyone else to break them.

I have a sense that levels of bio-surveillance and authoritarianism that would have been laughed off as conspiratorial, WEF fantasies just a year ago are now being treated as self-evidently proportional and just. We are like pilots who have lost sight of the horizon in the fog and no longer know which way is up. This is not good. Let’s keep calm and try to regain normality.

Oh, and one other thing. It’s all just a ride, of course, I get that. And I enjoy the plot lines and the narrative twists and the dramatic irony as much as the next wired-up customer. But some of these names are a little… On The Nose, don’t you think?

Fed-Friendly ‘Federer’, as the avatar of the Government Compliant Good Guy? That, I accept.

But this Anarch, this Knave, this tufty-haired Robbinsonian Woodpecker, who plays in the system but somehow keeps himself apart? Who laughs at society’s half-crazed attempts to put nature back in her cage? You are calling him, No-Vax Joker-vitch? Really, the Simulation?