The Blue Wall isn’t about to crumble

The Chesham and Amersham result was remarkable. But the Lib Dems will struggle to repeat it. 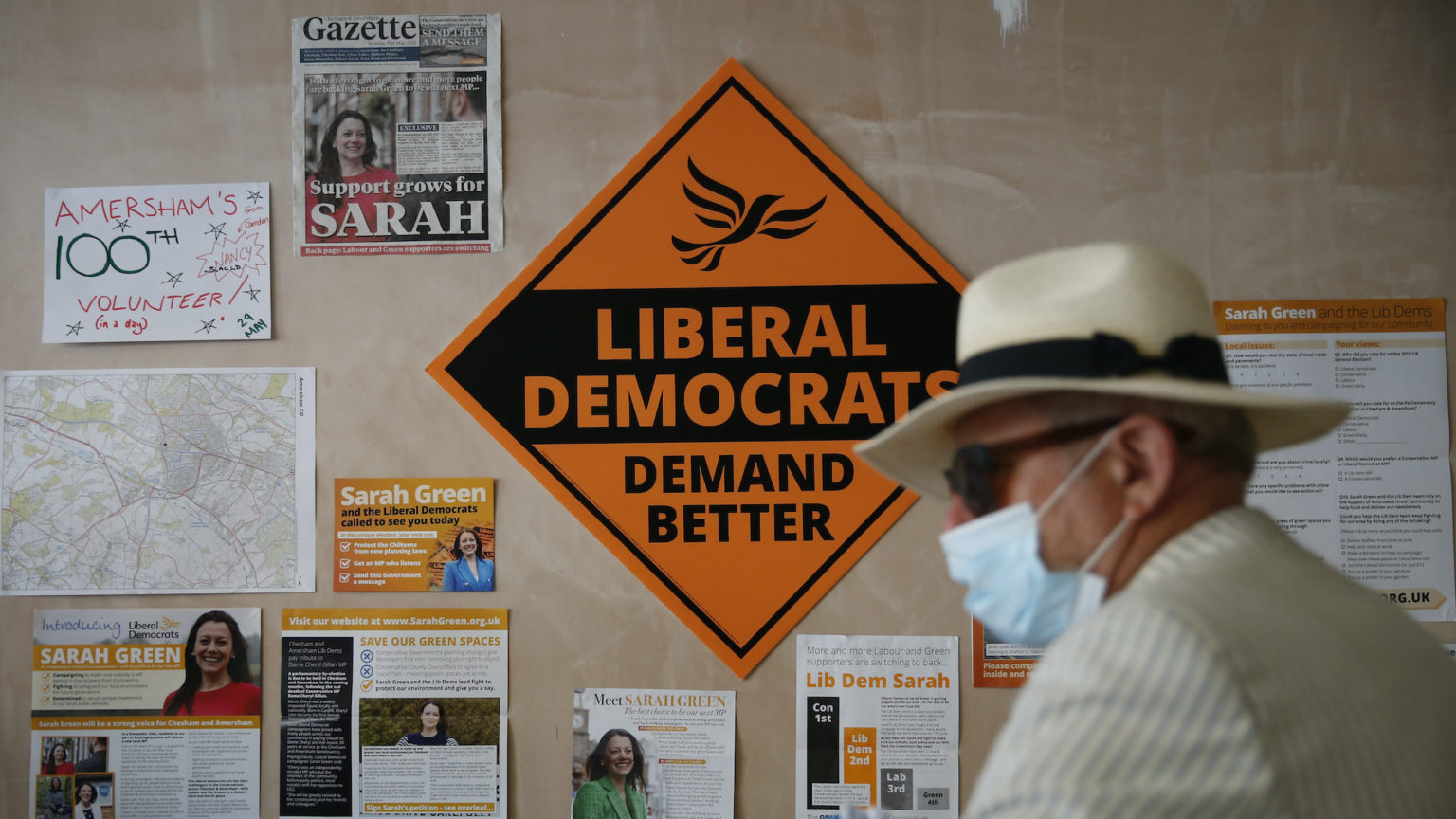 It’s 3am, it’s chucking it down, the council staff have cleared away the sheaves of ballot papers, the paper clips and the rubber bands, and a Lib Dem has breached the Tory electoral fortress that was Chesham and Amersham. I’m stumbling back to an ill-earned bed in the pretty market town of old Amersham. Through the rain, and high in the pitch-dark sky is a cherry-picker. It has a floodlight that could grace the Oval. While the nocturnal denizens of the UK’s politically interested start to digest the electoral turnaround, here, by the ancient St Mary’s Church, Max Beesley is filming John Wyndham’s Midwich Cuckoos for Sky.

When the Tories shake off their dry psephological hangovers, the cuckoos will have some resonance for them. Has some alien force landed in the Chiltern constituency and turned the population into woke drones? It at least would be an explanation of the stunning turnaround. The Lib Dems achieved a 25 per cent swing, turned over a 16,000 majority and have planted their renewable-powered tank on the very manicured lawns of Buckinghamshire.

This result will be accompanied by dozens of ‘Blue Wall’ articles – both in panic from more Tory-supporting media, and in gloating relief from those on the left. However, the vote here is the result of a unique cocktail of circumstances, which suggests that the Lib Dems will find it extremely hard to replicate it elsewhere in the former Tory heartlands of the Home Counties.

Cheryl Gillan, who died earlier this year, was an immensely popular MP. She had inherited the seat from Sir Ian Gilmour and had never scored less than 50 per cent of the vote. But there was a significant drop in her support in 2019. This was in large part caused by the Brexit effect (Chesham and Amersham voted Remain 55-45 in the EU referendum), whereas in large parts of the country Johnson reaped a Brexit dividend.

The Hartlepool by-election result last month confirmed that it is still paying out. Here it was a different story. Without a powerful incumbency factor, carved out by Gillan over nearly 30 years of service, the 2019 result would have been much, much tighter. UKIP came second here in 2015, with 14 per cent of the vote. Those voters have swung back to the Tories. But while the Tories have strengthened their right flank under Boris, they have a soft underbelly among those who see themselves as more caring.

I’ve spent a few days in the patch, and I have never, outside Knightsbridge, seen so many F-type Jags, Bentley convertibles and Lamborghinis as I have here. This may be Buckinghamshire – but these are not the ‘Shire Tories’ of popular fiction. It is peak aspirational Metroland. It is green, but manicured green. Nowhere else do you find Tube lines juxtaposed with such rural-seeming affluence. And you have to pay for such charm. Average house prices in Amersham according to Zoopla are £819,376.

The Lib Dems’ victory could be seen as a vote for localism, as people are fearful that the new planning legislation will use force majeure tactics to build thousands of homes. If the towns and villages were offered real power over development, it is easy to imagine that they would be happy with five new houses here, or 10 there, in each of the villages. But people with no say tend to say No. The Lib Dems’ weaponisation of NIMBYism was brutally effective.

The Lib Dems had already done well here in this year’s local-council elections and worked themselves to the bone. That they claimed to be against the great rail scar ripping itself across the constituency goes against the party’s national policy, as the Lib Dems support HS2. However, Ed Davey’s 15 appearances during the campaign were no accident. They smelled blood.

On election day itself, it was quite apparent that the Tories’ hearts were not in it. I spotted at least 50 Lib Dem activists shaken out across the county, and merely two Tories. And this wasn’t just in the Lib Dem areas of the commuter towns of Chesham and Amersham themselves, but in every village and hamlet I passed through. The strong Tory areas were festooned in the orange lozenges, which for once were not lying. Yes, the Lib Dems were ‘winning here’.

There was also a very concerted effort to persuade the 7,000 Labour voters from 2019 to switch. Given that last night Labour suffered its worst ever by-election result, that approach clearly worked. It also worked with the Green vote, which was halved.

This was a victory of Tory lethargy. I hardly know a single Tory activist who visited the constituency. The panic button was eventually pressed by Conservative Campaign Headquarters, calling on not just sitting MPs but also anybody aspiring to be on any future candidates list. But enthusiasm, there was none. It is a truism that in seats the Tories have held for generations the machines are arthritic, the joints creak, and new blood cannot be found for transfusion. That certainly felt like the case here.

Having said all that, the Tories still have an 80-seat majority, and the Lib Dems are running fourth behind the Greens nationally. In any serious contest they will not be able to pour activists into the seats around the south and outer London that they need to threaten that majority. Meanwhile, Labour is nowhere near competitive and is losing the woke and youth vote to the Greens – which adds tin tacks to Starmer’s bed of nails.

This by-election was seismic in one way, but outside of the record books it probably won’t turn out to be that significant.

In the end the Midwich Cuckoos were defeated by an elderly suicide bomber. I don’t think the Tories need to resort to such desperate tactics yet.

Gawain Towler is a commentator, former director of communications for the Brexit Party and is consulting for Reform UK.