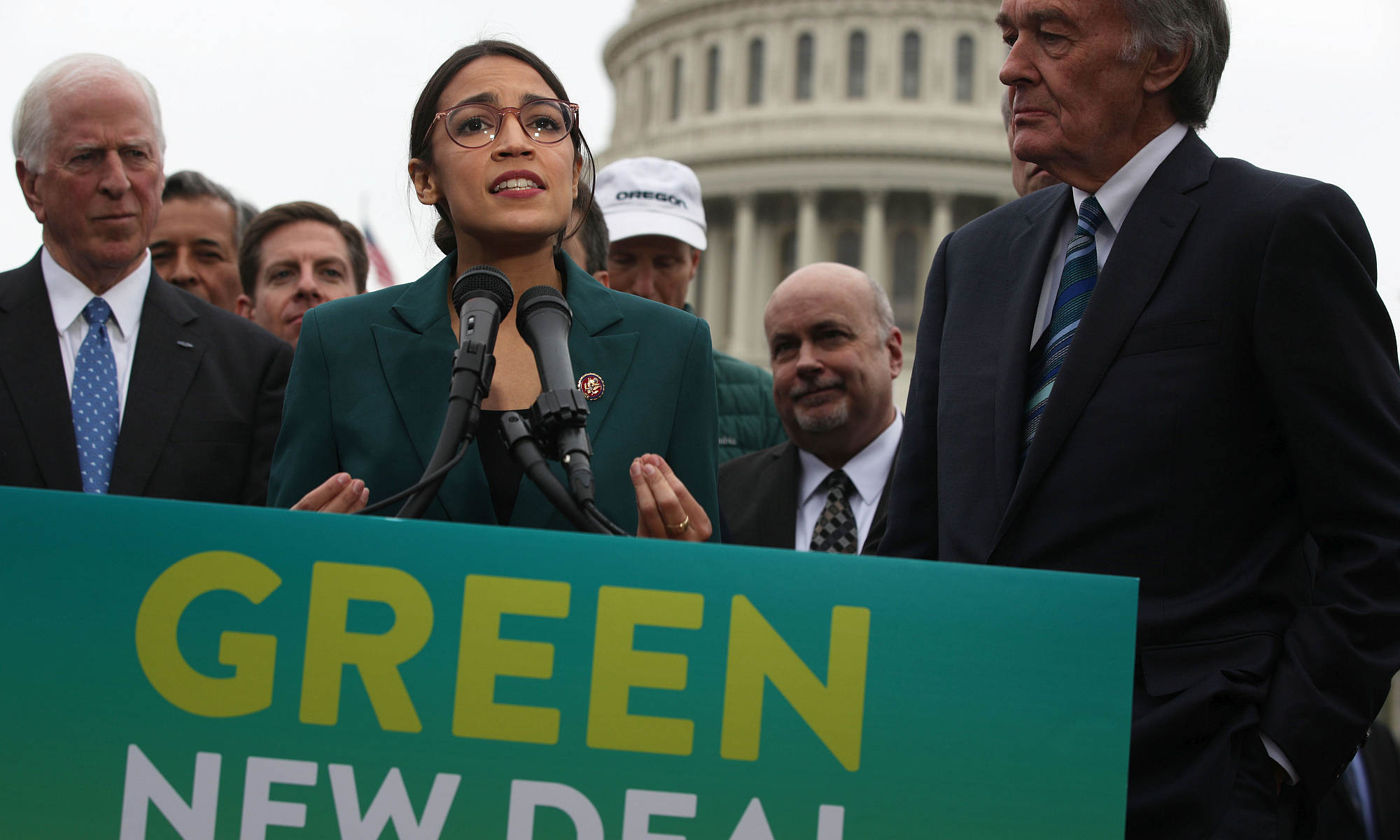 This corporate-backed plan will come at the cost of people's jobs and living standards.

‘The interesting thing about the Green New Deal is it wasn’t originally a climate thing at all… Do you guys think of it as a climate thing? Because we really think of it as a how-do-you-change-the-entire-economy thing.’ So said Saikat Chakrabarti, former chief of staff for Alexandria Ocasio-Cortez, and generally acknowledged author of the Green New Deal.

Sometimes it is wise to find out what ideas’ originators actually think. That is true for documents that have lit up our lives, such as the US Constitution, as well as for those that have darkened them, such as Mein Kampf.

This is true as well for the nascent Green New Deal, which President Joe Biden has essentially adopted as his own. Even if Congress fails to pass it entirely, Biden will seek to impose many of its goals through administrative diktats on gas-powered cars, land use, airplanes, any form of fossil fuel and nuclear power. Green New Dealers will also extend the welfare state, including to those who choose not to work.

As Chakrabarti indicated, the Green New Deal is not another environmental ameliorative, but something far more fundamentally transformative. The Biden administration’s embrace of it is somewhat surprising given that the likely economic fallout of this plan – particularly for the working class – made both Biden and House speaker Nancy Pelosi distance themselves from it during the fall campaign. But now the Green New Deal has resurfaced, having made the metamorphosis from a leftist fantasy into a serious political initiative.

Environmental puritanism and its consequences

The deep-seated sense of pending apocalypse that grips Western elites is driving the shift to draconian and radical policies. Some politicians, like Oregon’s Earl Blumenauer, have called on Biden to declare ‘a climate emergency’, which would essentially give the White House a blank cheque and unlimited power to impose its vision.

For environmental puritans like Blumenauer, climate sin is equivalent to sex and gluttony in the original Massachusetts version. For a generation, environmentalist advocates have prophesied an imminent climate disaster that would, if not met with extreme action, threaten the very future of humanity. Such catastrophism, as a 2021 paper by two Carnegie Mellon professors demonstrates, undermines the climate-change movement’s credibility. This assertion is also made in environmentalist Michael Shellenberger’s devastating Apocalypse Never: Why Environmental Alarmism Hurts Us All.

Remarkably, despite this record of distortion, climate hysteria has become the abiding faith of the dominant media, universities and a large swath of the corporate establishment, particularly on Wall Street and in Silicon Valley. Some have even embraced the hardly capitalist notion of degrowth, an ideology which suggests, in essence, the Western working and middle classes must sacrifice comfort and aspiration to save the planet. (Often at the urging of the world’s wealthiest people, with their grand estates and private jets!)

Although most industrial unions backed Biden, the first clear victims of his embrace of the Green New Deal are obvious: people working in energy and fields that depend on reliable and affordable energy, such as oil workers, truck drivers, factory and logistics workers. For example, a move to ban fracking – which vice-president Kamala Harris has supported – would, according to a US Chamber of Commerce report, cost several million jobs. This will be made much worse by the green turn against nuclear power and natural gas, notes long-time environmentalist Ted Nordhaus.

Under the Green New Deal, displaced workers will be placed on the dole, or encouraged to take a job in the ‘green economy’. Yet these jobs, notes a recent Building Trades Union study, pay far worse, and are less likely to last long or be unionised, than those in the conventional energy industry. ‘It’s pie-in-the-sky bullshit about these green jobs being good middle-class jobs, because they’re not’, said Terry O’Sullivan, general president of the Laborers’ International Union of North America, in conversation with Politico. ‘I’m concerned about union members and union families being left behind… and I think they’ve already been left behind.’ 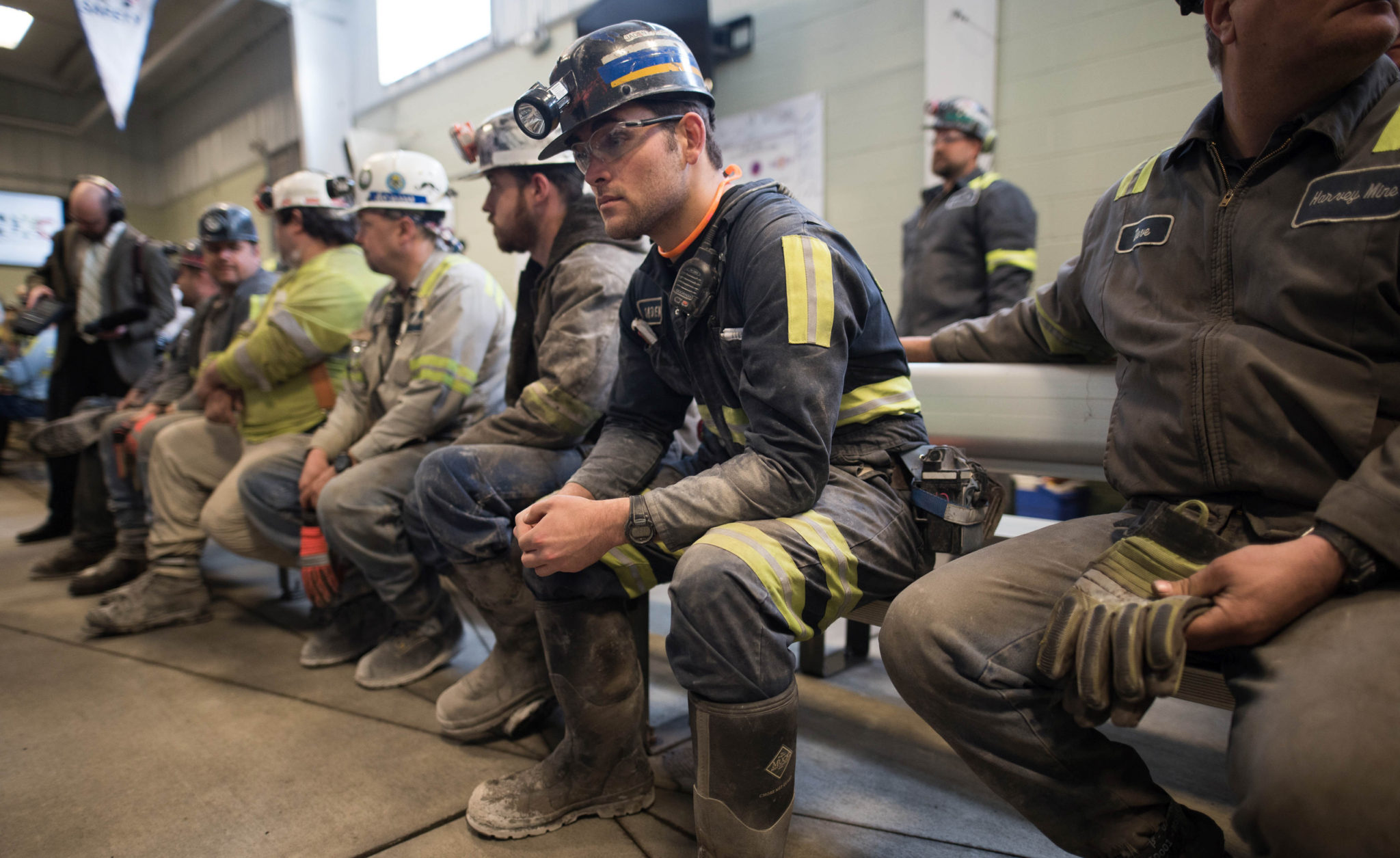 Coal miners at Harvey Mine, in Sycamore, Pennsylvania, 13 April 2017.

Climate activists today often mouth slogans about how climate change is also ‘racist’, but historically disadvantaged minorities are most likely to be negatively affected by a Green New Deal. In California, a test case for Green New Deal-style policies, extreme climate measures have driven the loss of traditional blue-collar jobs in manufacturing, construction and energy, while other environmental regulations have boosted housing prices. The biggest losers have been African Americans and Latinos. Overall, minorities in places like Los Angeles and San Francisco do far worse economically than in historically less regulated and taxed places like Kansas City, Phoenix, Oklahoma City, Atlanta, Dallas or Nashville.

A plan for an imagined country

Most Americans favour improving roads and bridges, as Biden has proposed. But they may be less thrilled with his administration’s determination to get them out of their cars, a virtual impossibility in much of the US. Biden’s proposals for transportation spending, which counts for a surprisingly small part of his $2 trillion infrastructure plan, embrace the Green New Deal notion of substituting trains for roads and planes. By some estimates, the infrastructure bill allocates $165 billion for public transit and rail against only $115 billion to fix and modernise the roads and bridges Americans drive on – which doesn’t exactly meet the needs of most Americans.

This is in a country in which 95 per cent of people do not use public transport to get to work. It accounted for less than two per cent of all urban travel before Covid, with the vast majority of Americans either driving or working from home.

In reality, public transport only really matters in a few places, notably New York and five other metropolitan areas (all heavily Democratic) with comparatively extensive rail systems (Chicago, Philadelphia, San Francisco, Boston and Washington, DC). The core cities of these metropolitan areas account for nearly 60 per cent of public transport use in the US, yet provide only about one tenth of national jobs.

In the rest of the US, attempts to boost public transport’s share of urban travel have generally failed. In Los Angeles, the nation’s densest urban area with the best weather, over $20 billion has been spent on an urban rail system, to no avail. Indeed, since 1985, just before the rail system opened, the actual number and proportion of transport users has fallen.

Particularly ludicrous are proposals for the massive development of high-speed rail, a major objective of the Green New Deal. President Biden suggests that we ‘imagine a world where you and your family can travel coast to coast… in a high-speed train, close to as fast as you can go across the country in a plane’. This is all but physically impossible. The fastest high-speed rail trains in the world average about 200 miles per hour – compared to the routine 500-miles-per-hour average speed of long-distance jets.

It is also highly unlikely that Washington could build transit systems as efficiently as the Chinese state, with its top-down autocratic system. In the US, new routes would have to withstand a far more demanding legal system, environmental checks and high costs by international standards. World Bank research has estimated that US high-speed-rail construction costs would be a third higher per mile than in Europe, and nearly 150 per cent higher than in China.

These difficulties have been evident in the one big high-speed system under construction. In less than a decade, the California high-speed-rail project has doubled in cost and, far from its original 2020 deadline, is not likely to connect San Francisco to Los Angeles any earlier than 2033.

Cost and efficiency may be of marginal interest to ideologues seeking to alter how Americans live. But automobile-dominated suburbs and exurbs are home to a majority of Americans and 85 per cent of people in our largest metropolitan areas. These Americans’ habits will now be targeted, transport secretary Pete Buttigieg suggests, by such measures as ‘road diets’, which seek to limit or even eliminate roads, and even a proposal for taxing cars by miles travelled. These measures seem certain to spark a strong reaction from people in auto-dependent suburbs, exurbs and smaller municipalities. Higher taxes on motorists sparked the gilets jaune protests in France last year, which brought about massive disruption and eventually a government delay in new gas levies and boosts in electricity prices.

Biden’s agenda also includes support for measures to force suburban areas to densify. It is likely few suburbanites, the majority of all Americans, would welcome federal overseers determining the ideal makeup of their communities, which are already rapidly and increasingly integrated. 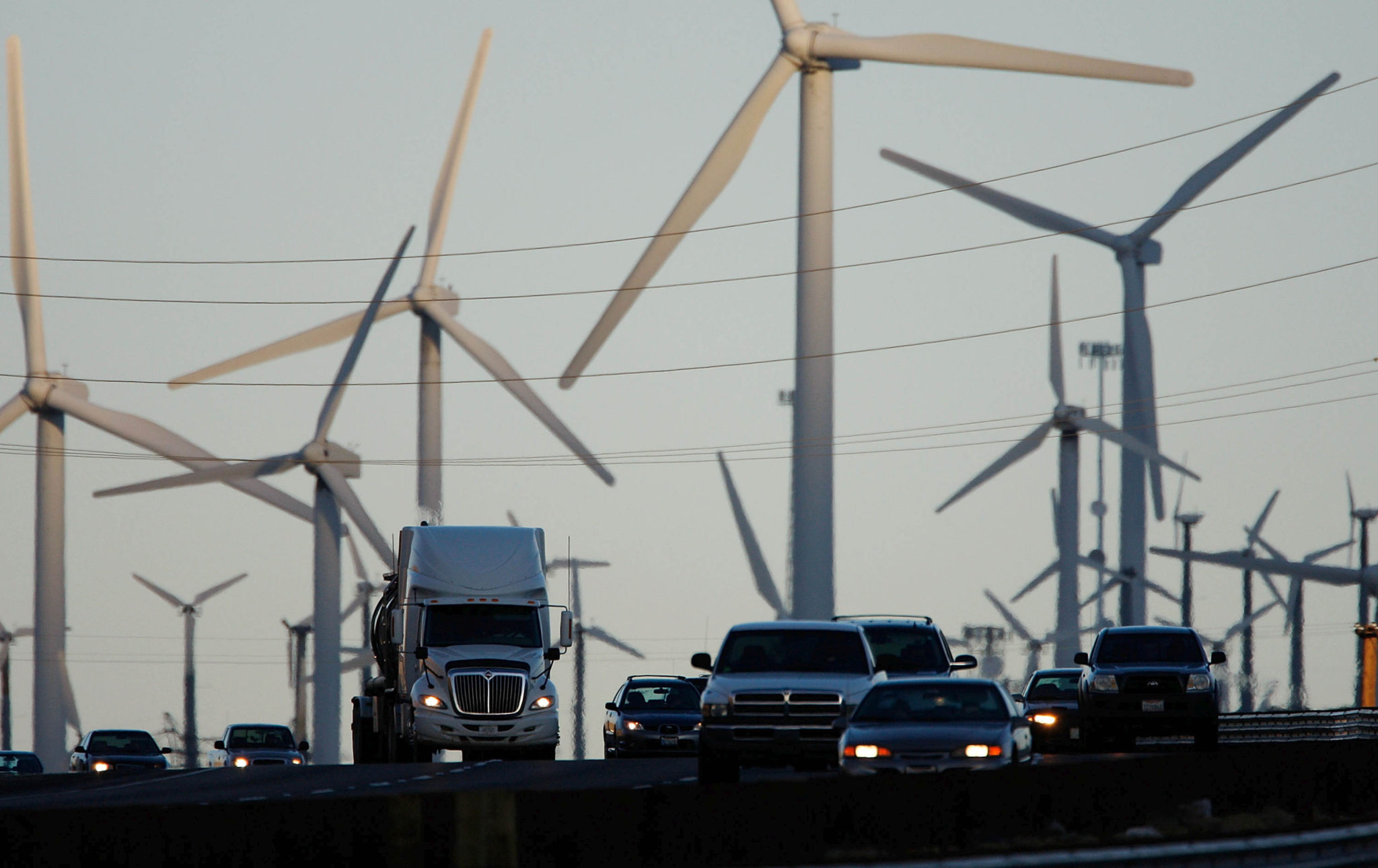 Trucks and cars pass windmills along the 10 freeway, near Banning, California, on 8 December 2009.

Daily life under the Green New Deal would not only be more crowded, it would likely also leave more people poorer. Virtually all places like California, Germany, as well as the EU, that have made dramatic moves towards a ‘renewable’ energy policy also suffer higher prices and rising levels of ‘energy poverty’. The Jacques Delors Institute estimates that already some 30million Europeans cannot adequately heat their homes this winter. Deutsche Bank’s senior economist Eric Heyman predicts the green policies will create ‘a European mega-crisis’ and a ‘noticeable loss of welfare and jobs’.

A redder shade of green?

In America, at least, such an agenda is not driven by the concerns of the broad public. A recent Gallup poll showed 26 per cent of Americans are focussed on the pandemic, 16 per cent on economic problems, and 10 per cent on race – just three per cent mentioned climate and environment as their key concern.

So who benefits from the political focus on climate? Ironically, right now, it would be the Wall Street and Silicon Valley oligarchs who, under Obama, used his green-energy programmes to add to their already bloated bank accounts. The Green New Deal would widen this opportunity for profiteering dramatically. This clearly is not the kind of ‘change the economy thing’ the Green New Deal’s designers had in mind when they dreamt of derailing the entire free-market system. After all, capitalism remains the prime villain in their tale of planetary devastation. They did not want to green it; they wanted to transform or destroy it.

The real conflict will come to the surface when taxes need to be raised to pay for environmental virtue. Democrats could undermine their electoral appeal if the money has to come from the already beleaguered middle and working classes. Yet any attempt to take wealth and power from tech and Wall Street oligarchs, including such figures as Bill Gates, threatens those who are now the party’s most influential allies.

Eventually a conflict between red-leaning greens and the plutocratic ‘green’ oligarchy seems likely. If this divide opens widely, there may be an opportunity for a more reasoned, gradual and less socially regressive environmental approach – one focused on preserving the health not only of the Earth, but society as well. 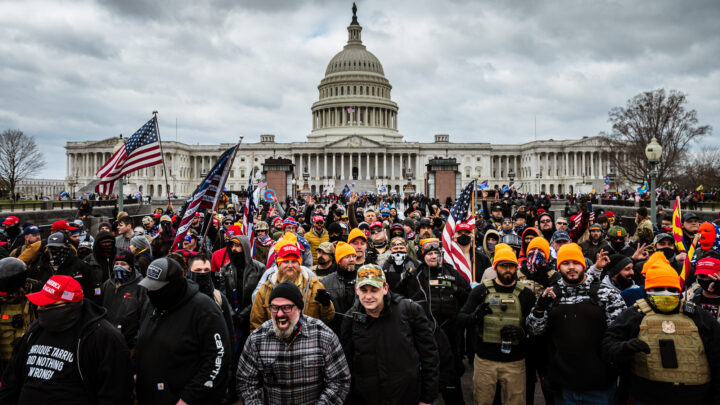 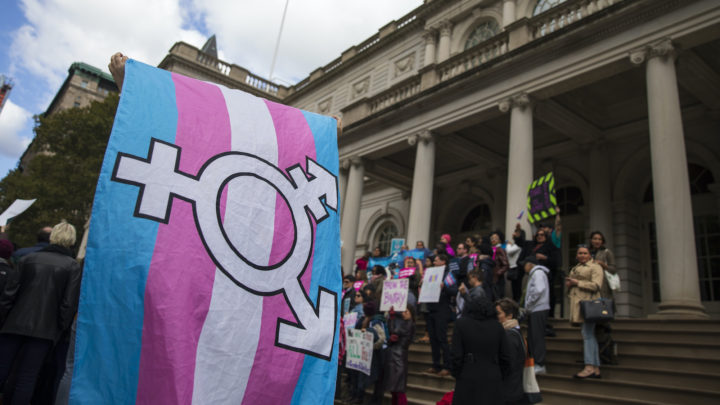