We must all have the right to say what we think is true. 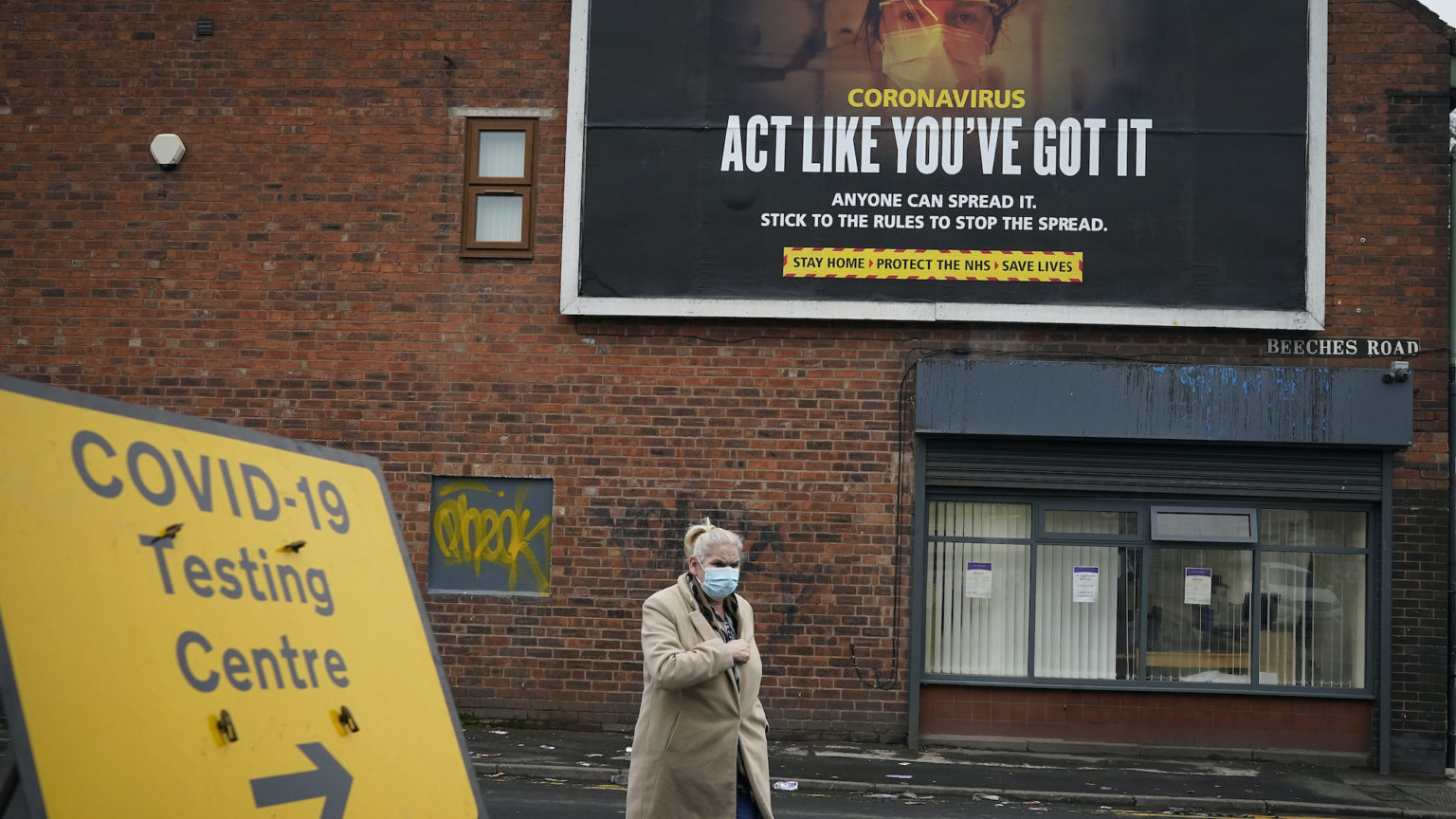 Almost every line in Pride and Prejudice is stuck in my head for some reason, but when it comes to disputing lockdown Mrs Bennet’s problem with her daughter coughing echoes in my mind:

‘“For Heaven’s sake! Have a little compassion on my nerves.”

“Kitty has no discretion in her coughs”, said her father; “she times them ill.”

“I do not cough for my own amusement”, replied Kitty fretfully.’

Saying ‘lockdown has to stop – right now and forever’ is like coughing in public. No sane individual does any such thing – out loud. But some of us believe ‘This has to stop – right now and forever’, because our souls revolt against being forced to live like this. And that’s like coughing when you can’t help but cough – something you must do alone and never admit to afterwards because it makes you a murderer.

It’s true China is free of Covid-19, but the Chinese are not free.

No democratically elected government should be able to suspend the right to protest. So while the rest of the country applauded a 100-year-old for performing the ultimate sacrifice, and dying of Covid-19 to show us all we have to keep putting up with existing under house arrest, my hero is now Eric Levy, the 92-year-old anti-war campaigner who was arrested protesting outside Westminster Magistrates’ Court because Julian Assange had been denied bail.

He and several other (unnamed) pensioners clearly believe that some rights should never be surrendered no matter the risk to their own personal safety. As the Daily Mail reported, several shouted ‘fascists’ to those taking them away. We are now living in a police state. And like most citizens in a police state we appear to believe that those being arrested have done something wrong, so the police are quite right to arrest them.

All that is most beautiful in human behaviour is now a criminal act: falling in love with someone you’ve never met, being there for your friends no matter what, caring for the elderly, smiling and chatting in queues, teaching children, hugging your granny, praying in church, paying respects to the dead, wetting the head of a newborn baby…

You can look up a list of all the things police officers have issued fines for in the name of ‘saving lives’ but it sickens me to have to rehearse it, so I’ll just point to the fact that – on a single weekend in Hackney in London – they issued £40,000 in Covid fines. If there were a referendum tomorrow, asking the entire population if they want to live like this a second longer, I suspect the government, the media and the rest of the elite would be shocked as to what voters would confess in the privacy of a polling booth. British people have a history of loving liberty and standing up to tyranny.

The state we are in now is detailed very clearly on the first page of The Handmaid’s Tale, so anyone who spent four years in a hysterical state claiming Donald Trump was unleashing that in America must be aware of it. Do we want freedom from Covid or freedom to do what we want? Because it’s clear we can’t have both and we need to pick a side, and the fact that I want freedom to means I need to point this out just like those who want freedom from (Covid) have the right to tell me my views will kill people. They told us if everyone got vaccinated we’d be out of this. This week they’re preparing the ground for the fact that even when everyone is vaccinated they’re not letting us out of this. Unless we stand up and say out loud: this lockdown has to be the last.

At Christmas they said if we all submitted to the vaccination programme, we’d all have a great summer. Fatalities are fewer, infections falling, and they’re telling us to cancel our plans for summer – just like we’ve had to sacrifice everything to the Covid god since Mothering Sunday last year. Every time we’re freed, the virus spreads, so they lock us down again, even though millions of people must have had the virus and recovered, meaning if the vaccine works they should have immunity by now. But they don’t so much move the goalposts as invent them. If you caught the virus in the first wave, you weren’t safe from the new mutant strain rife in Kent… Now they’re going door to door testing for the South African variant…

It’s clear that – whether this is the aim or not – a two-tier society is opening up in Britain which suits the elites like a dream. There are those who can work from home and live a very nice life (a better life, even) during lockdown and they are able to do so thanks to a servant class, which must keep calm and carry on, or else the apparatus of the elite WFH existence will collapse. If lockdown works, then the servant class ought to have suffered in the way Imperial’s nightmare projections said we would. Their old will have died en masse because they couldn’t stay home and save lives by separating off from each other. The sections of the servant class that aren’t necessary to the elites have been sacrificed too, since their service is not required; they’re alone, and going out of their minds, even though the virus poses no risk to them, and they don’t have to stray near anyone over the age of 60.

At some point the government will have to stop printing free money and when they do it’s hard to see how all the businesses propped up by the free money will continue to exist. I’m so aberrant in my thoughts I don’t believe that there is any such thing as free money and I’m terrified out of my wits as a result. To date the economy has not collapsed, but I can’t see how it won’t if lockdown continues to be reimposed. I am also frightened by the idea of ‘vaccine passports’. If the government introduces any such thing I’m not taking that vaccine on principle because it’s a precedent too far. Who wants to live in a world where free people must submit as the government suspends your right to do everything you hold dear while condescending to vaccinate you against a virus that mutates constantly…?

Stillbirths doubled in the first lockdown and those deaths disturb me more than Captain Tom dying of Covid at the age of 100. Is it ‘our’ NHS anymore? Because basic medical treatment seems to be held hostage by Covid. On page 17 of The Times on Monday I read a report that those who need it must ‘wait years’ for NHS dental treatment because in this new, two-tier society, dentists are, naturally, prioritising the needs of those who can pay £1,700 for treatment that would cost £60 on the NHS: ‘A briefing document also highlighted the case of a patient who was told to use a nail file to deal with a broken tooth while others were advised to “buy dental repair kits and treat themselves”.’

What other medical needs are being neglected and how many more deaths are predicted – long-term – as a result of us living like this? The last prime minister asked this question last year. Our present prime minister believes in democracy so much he walked out of the House before she did so and still refuses to answer. As Camilla Cavendish pointed out in the Financial Times: ‘There was outrage when the government tried to prorogue parliament to avoid scrutiny of the Brexit negotiations. But when it has rolled over about coronavirus restrictions, nothing.’

Much as those who believe in a Covid-free world must have their say, those of us who don’t must not be silenced as cranks, trolls, idiots, conspiracy theorists and anti-vaxxers, unless we all want to start living in an actually authoritarian future. ‘The production of souls is more important than the production of tanks’, Stalin said. ‘Writers [are] engineers of the human soul.’ The Hungarian Revolution never would have happened – in Khrushchev’s view – ‘if a few writers had been shot in time’.

But writers in the Soviet Union were proud to be done away with for speaking the truth of the human soul. ‘Only in Russia is poetry respected, it gets people killed’, Osip Mandelstam said shortly before writing what he felt was worth dying for. Do we think that the government should behave like the Chinese government in any way, shape or form? No we don’t. Do we think the lockdowns we’ve had already have saved more lives than they’ll cost in the end? No we don’t. So while I’m sure we hope we’re wrong, and in a year’s time will look back and want to slap ourselves for getting into such a hysterical state, the future of the freedom of the human race seems to be under threat. If that’s something you feel in your soul, it can’t be engineered out of you by anyone, and as writers we have the duty to write down what other souls need said.