QAnon: a threat to democracy and rationality

A QAnon believer could be elected to congress. Conspiracy theories have become mainstream. 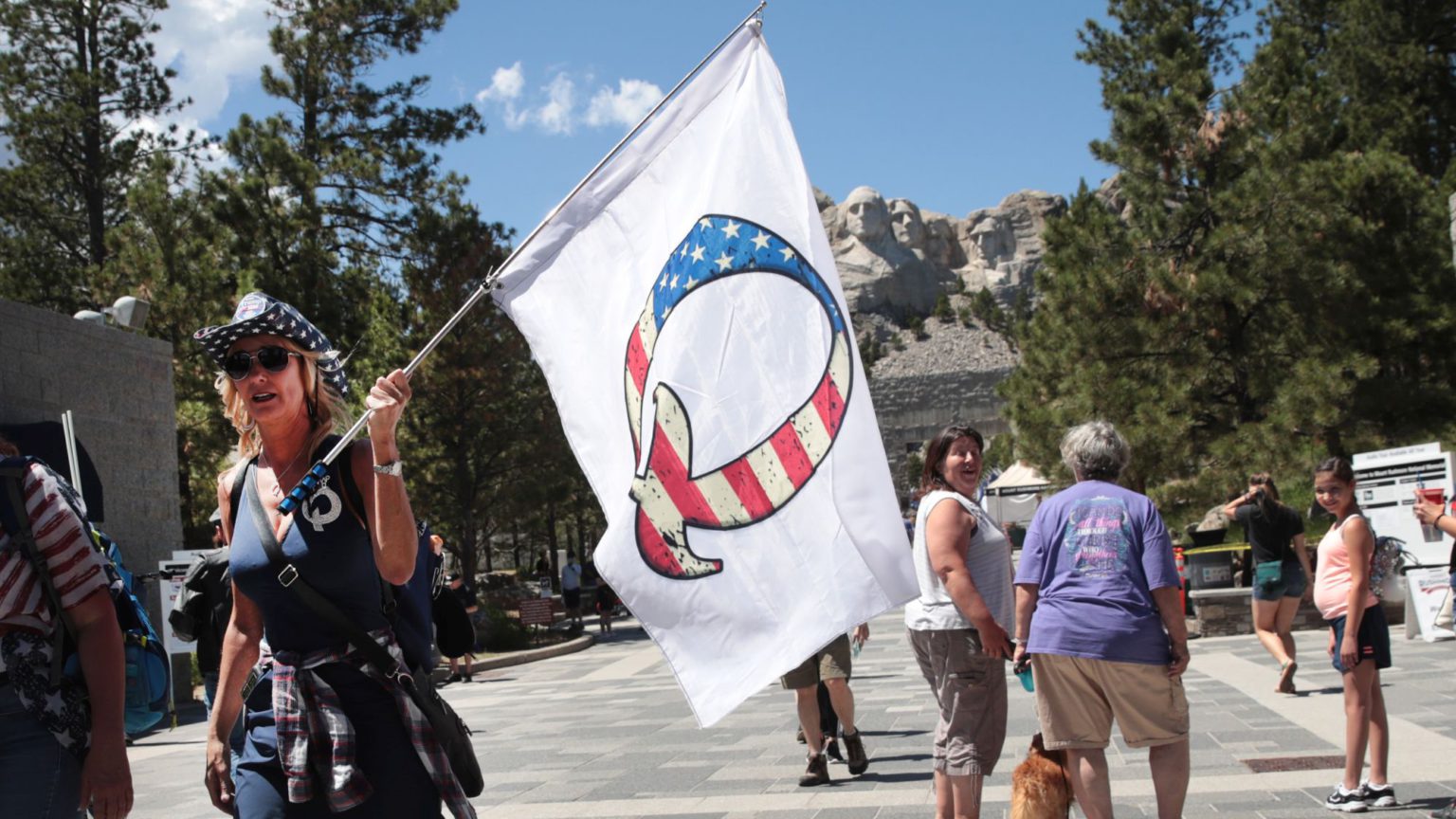 The term QAnon was once unfamiliar and peculiar. Back in March, 76 per cent of Americans said they had not heard or read anything about QAnon. But by August, QAnon was hitting the headlines and sending shivers through the American political elite when Marjorie Taylor Greene, an avowed believer in QAnon, won a Republican congressional primary in Georgia. Given her chosen district’s strong Republican leanings, she will almost certainly be elected to the House of Representatives in November. QAnon is now mainstream.

So, what is QAnon and why does it matter? QAnon is a conspiracy theory. It began in 2017 on 4chan, the notoriously foul online message board, when an anonymous user – ‘Q’ – posted that Hillary Clinton was about to be arrested. What prompted Q’s post was a quip made by Donald Trump during a press conference about a ‘calm before the storm’. Q’s theory was that a cabal of Satan-worshiping, child-trafficking paedophiles and cannibals (led by Clinton and others) sought to dominate the world and were plotting against President Trump. Q claimed that Trump’s press conference revealed that at some appointed time in the near future, Trump would unleash ‘The Storm’ to destroy the conspiracy and thus restore America to greatness.

Over the past three years, undaunted by the notable absence of Trump’s ‘Storm’, Q and many others have expanded the theory to cover the forthcoming presidential elections. Q claims to be a government insider exposing an entrenched, international bureaucracy that is secretly plotting all sorts of heinous schemes against the Trump administration and its supporters. Q uses language that implies that he or she has a military or intelligence background. The posts, which are shared on numerous social-media platforms, have attracted thousands of followers.

QAnon is not confined to social media, though. Some QAnon believers have led coordinated harassment campaigns against journalists, rival online communities, celebrities and liberal politicians. The New York Times reports that there have been multiple incidents of real-life violence linked to QAnon supporters. Supporters have shown up at Trump rallies wearing Q-themed merchandise. The president has retweeted Twitter accounts related to Q and other conspiracy theories dozens of times. What Trump knows about QAnon, beyond the fact that it’s a movement which supports his presidency, is unknown.

Followers of Q see President Trump as the vanquisher of a cabal of paedophile anti-American traitors who have taken over government, industry, media and other public institutions in order to… well, you can fill in the box as to whatever you might think such conspirators would like to achieve. Yet this mad conspiracy theory is now worn as a badge of honour and distinction in some mainstream Republican circles. While the internet has been the vehicle through which this movement has travelled and gathered pace, the internet alone cannot explain why it has come about, nor why it is now influencing US elections. These are the far more important questions.

It is easy to dismiss QAnon as deranged. But this would brush aside the most worrying dimension of its influence. Historically, conspiracy theories were mostly influential on the margins of society. However, since the turn of the 21st century, conspiratorial thinking has become more mainstream. The idea that ‘something fishy’ is going on, that we are being manipulated by some unseen force, now transcends the political divide. The Iraq War, 9/11, vaccinations, child abuse and other moral panics have become the subject of conspiracy theories. The idea that dark forces (usually involving Jews in some form) are manipulating events behind the scenes has become accepted as an incontrovertible truth by conspiracy theorists of both left and right. QAnon and its supporters certainly don’t have a monopoly on irrational and deranged thinking.

The sad truth behind the growth of this conspiratorial mindset is that it always contains an element of good instincts, such as a desire to gain control over uncertainty. The questioning of governments and experts is also inherently a good thing. This is the bedrock of accountability. Scepticism can lead to better outcomes. But conspiratorial thinking goes way beyond scepticism. Its rise suggests that mistrust is now endemic in society.

The Pew Research Center reports that most Americans (71 per cent) have heard of a conspiracy theory alleging that powerful people intentionally planned the coronavirus pandemic. More worryingly, a quarter of US adults see at least some truth in it – including five per cent who say it is definitely true and 20 per cent who say it is probably true. The share of Americans who see at least some truth to the theory differs by demographics and political party.

In the face of uncertainty and catastrophe, people are yearning for explanations that can help explain what lies behind unwelcome developments. The quest is for meaning, rather than facts – for some notion of control instead of random uncertainty. This is why the content of QAnon is unimportant, while the motivation and drive behind the phenomenon is significant.

Historically, conspiracy theories have always been a means through which powerless and uneducated people have tried to gain some understanding of the forces that seemed to control their lives. Conspiracy theories offered fearful people a story that promised them a semblance of understanding. This is why all conspiracy theories morph endlessly into new areas with such ease. It explains how Q’s initial claims about Hillary Clinton have become a vehicle for a whole host of election-related theories.

But the sad truth about Western society today is that conspiracy theories are no longer confined to the powerless and uneducated. Now, the educated sections of society, including the elites, see the world through a conspiratorial lens. Just think of their response to Brexit, the election of Trump and the rise of populist political parties in Europe. All recent political upsets have been blamed on shady external interventions – from Russian meddling to Cambridge Analytica and social-media manipulation.

Arguably, QAnon has filled a vacuum left by an elite whose condemnation of the electorate has fuelled mistrust, suspicion and animosity. At the same time, the elites have jettisoned the old Enlightenment assumptions, conventions and practices which served as an explanatory framework for interpreting events and dealing with uncertainty. In their place, we have the culture war, identity politics and cancel culture.

The elite’s loss of confidence about how to deal with uncertainty means the narrative of ‘hidden agencies’ and ‘dark forces’ is now a pillar of elite culture itself. The resulting conspiratorial imagination views all people not as the authors of their destinies, but as objects of manipulative, secretive forces. The flourishing of this imagination in recent years has been driven by the elites’ own difficulty in asserting the authority of science and knowledge. It is their own inability to put forward an authoritative account of events that has opened the door to conspiracy theories.

The perception that our behaviour and actions are controlled by external agents is symptomatic of a heightened sense of fatalism, which arises from today’s sense of diminished subjectivity. The feeling of being subject to manipulation and external control – the very stuff of conspiracy theory – springs from the contemporary perception of ourselves as powerless, which is felt across the whole of society, but particularly among the poorer sections of society who have become more disposed to conspiracy thinking.

The rise of QAnon represents an impoverishment of intellectual discourse and the denigration of public life as a whole. Whatever positive kernel may reside in the questioning of authority, conspiracy theories are destructive and need to be opposed.

For all its bluster and, in some cases, political violence, QAnon is promoting a sense of powerlessness. Being active on social media is, in fact, an act of passive resignation – a non-involved act of watching as unaccountable, unreachable and fundamentally unknowable forces stitch up political life. Worst of all, despite claiming to be anti-establishment, conspiracy theories side-step any actual confrontation with political elites, letting them off the hook.

QAnon is not only anti-reason – it is also anti-democratic. This is not political activism, but political cynicism. It thrives on a seemingly thrilling, but ultimately pacifying, sense of outrage against the wicked people who supposedly run everything behind the scenes.

The rise of QAnon in America shows the extent to which American citizens are being transformed into victims. Yesterday’s agents of change are today’s bewildered observers of secret crimes and corruption. QAnon’s ‘truths’ only shroud everything in obfuscation. They are normalising hearsay, backwardness and lies, suggesting that there is nothing we can really do about the world or even our own lives.

QAnon is, in reality, aiding not undermining their hold on power. When we should be admonishing the elites’ abandonment of rationality, their acquiescence to cancel culture, their rejection of progress and the Enlightenment, QAnon fuels a cynical, anti-political passivity.

We should be confronting the political elites for what they are actually doing, not what some cranks fantasise they are up to behind the scenes. We need to fight for the authority of knowledge, for rationality, as a counterpoint to the elite abandonment of the past gains of humanity. And we also need to marginalise the conspiracy theorists in order to rediscover human agency.