BLM: rebels without a cause

BLM activists claim they are fighting America's systemic racism. It's just a shame it doesn't exist. 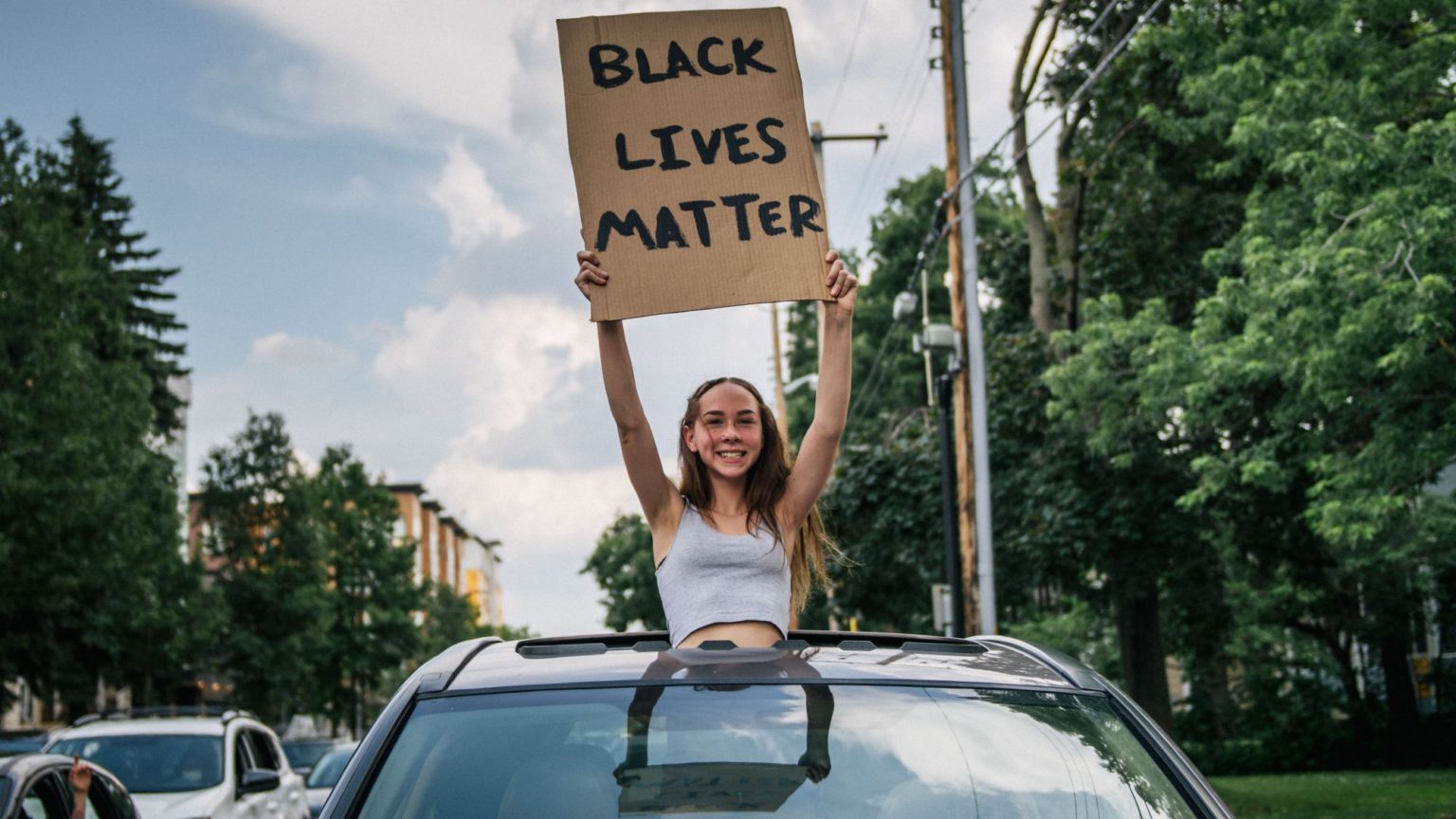 Around the world, people understandably reacted in anger and disgust at the killing of George Floyd. But if the subsequent protests, which descended, at points, into riots, lootings and indiscriminate iconoclasm, are meant to increase racial harmony and deter police brutality, then they’ve failed spectacularly.

In a few short weeks, more black people have died from the chaotic and indiscriminate violence, excused by leftist media and politicians, than unarmed black people at the hands of the supposedly racist police in the whole of 2019.

But were the protests at least built on a solid foundation? Is there rampant racism in the police force, and systemic racism in the US as a whole? In short, no.

Derek Chauvin, who killed Floyd, is now under arrest and awaiting trial. He is likely to spend the rest of his life in jail. In this instance the legal system is clearly not racist. Moreover, Minneapolis chief of police, Medaria Arradondo, is black – a fact that undercuts the charge that the Minneapolis police department is systemically racist.

Racists do exist, of course. And there will be racists in the 800,000-strong US police force. But to say that the US is systemically racist is a different claim. And too many people are unable to make this distinction, or worse, propagate a narrative that deliberately blurs it.

In an essay on the Black Lives Matter protests and riots of the mid-2010s, I referred to studies from Harvard, Washington State University and the City University of New York, which all suggested that police in the US do not shoot blacks more than whites. In fact, the evidence suggested they are less likely to shoot black suspects.

More recent research bears out these findings. A 2019 study by researchers from Michigan State University, drawing on data compiled by the Washington Post and the Guardian, also found no evidence of anti-black tendencies in fatal police shootings.

It is often noted that there are higher rates of blacks being shot by police when blacks are considered as a proportion of the US population. And this is true. As I noted in 2016, while the US police killed twice as many whites as blacks, ‘blacks make up only 13 per cent of the population’, whereas whites make up 62 per cent.

Nevertheless, as the Washington Post has shown, while more blacks than whites are shot by police, when considered as a proportion of the US population, ‘the number of black and unarmed people fatally shot by police has declined since 2015’. Indeed, the number of blacks killed by police has fallen by 5.9 per cent since then, compared to just 0.3 per cent for whites, who still make up nearly half of all those killed by police.

The statistics certainly cast a considerable amount of doubt on the now mainstream media narrative of systemic police racism.

Black lives that don’t seem to matter to BLM

Chicago has been at the centre of recent BLM protests, so it’s worth looking at it in some detail. In 2019, there were around 500 homicides in Chicago. As of mid-June this year, there have been over 250 homicides. They have consisted mainly of young black men, killed by other young black men. Amazingly, Chicago police solve under 30 per cent of these murders.

Is Chicago systemically racist? Hardly. It is one of the largest cities in the US. It is almost exactly a third black, a third white and a third Hispanic. It has been governed exclusively by Democrats since before the Second World War, and now has a black female city mayor in Lori Lightfoot, a black female district attorney in Kim Foxx, and a black superintendent of police in David Brown.

It seems odd for BLM to be protesting in Chicago, of all places, about systemic racism. The facts suggest that if saving black lives is your chief priority, you ought to be demanding more policing and better leadership, rather than less policing and more leaders who happen to be black, as BLM does.

Moreover, why does BLM never protest about the thousands of black people murdered each year? Why does it only protest when white police officers are involved? And why is it that many refuse to acknowledge the fact that crime is a problem overrepresented in the black community?

The answer seems to be that for the likes of BLM, Al Sharpton and Jesse Jackson, the chief concern is not black lives. Rather, it is to instil the narrative that the US is racist.

As Booker T Washington noted over a hundred years ago, ‘there is a certain class of race problem-solvers who don’t want the patient to get well, because as long as the disease holds out, they have not only an easy means of making a living, but also an easy medium through which to make themselves prominent before the public’. Unfortunately, there is a lack of will in either the media or politics to challenge this dishonest narrative about the extent of racism in America.

The Democrats have behaved particularly badly. Having sown the seeds of racial resentment in recent years, they are now reaping the harvest. Democrat-run cities, which account for 19 of the top 20 most violent cities in the US, are precisely the places where defunding the police is being floated as the ‘solution’.

But it is not only the claim that American policing is systemically racist that should be challenged. The idea that racism is the foundational creed of the US should also be challenged.

It is 155 years since the formal end of slavery in America. It took a war, in which more than 600,000 mostly white people died, to end a disgusting but unfortunately then common practice that still persists elsewhere today. It is estimated that there are 40million people around the world today living in slavery. America is one of the places with the fewest enslaved people.

So why do these protesters deface even statues of Jefferson, Lincoln and Ulysses S Grant? These are the people who brought about the end of slavery in the US.

The protesters’ refusal to think rationally or countenance facts is staggering. The US has had a black president for two terms, 15 African-American cabinet secretaries, and a half-Native American vice president in Charles Curtis way back in 1929. Moreover, 40 African-American candidates have run for the presidency as their party’s nominee since 1904. Frederick Douglass ran as early as 1848 as a candidate for the Liberty Party, and four African-Americans ran in the Democratic primaries for the 2020 election, in addition to Tulsi Gabbard, an American Samoan, and Andrew Yang, who has Chinese heritage.

There are currently 36 black mayors of cities with over 40,000 residents in the US, and 16 of these are in cities where blacks are a minority, including Chicago, Dallas and the capital Washington, DC.

Off the top of my head, I would put in any list of great Americans Martin Luther King, James Baldwin, Frederick Douglass, Booker T Washington, Muhammad Ali, Malcolm X, Maya Angelou, Louis Armstrong, Ella Fitzgerald, Michael Jordan, Oprah Winfrey, Jessie Owen and Dave Chappelle. And two of the most venerated books of American literature are The Adventures of Huckleberry Finn and To Kill a Mockingbird, both of which possess overt anti-racism messages.

And this is a country that is supposedly racist in 2020.

In a debate on reparations, the late, great Christopher Hitchens defined racists not as those who discriminate, but precisely those who are unable to discriminate between individuals. Instead, the racist prefers to see individuals as groups, based on arbitrary markers like skin pigmentation.

This is exactly what the so-called anti-racists are doing. They clump together all black people, and all white people. They then paint all black people as mendicant, and unable to forge their own way without the white people getting out of the way. Theirs is the soft bigotry of low expectations.

The latest anti-racist lynching of America shows how much damage can be done by well-meaning people who follow narratives rather than facts, and who treasure feelings over truths. The road to hell is indeed paved with good intentions.