The myth of white privilege

British capitalism was built on the ruthless exploitation of wage slaves, not black slaves. 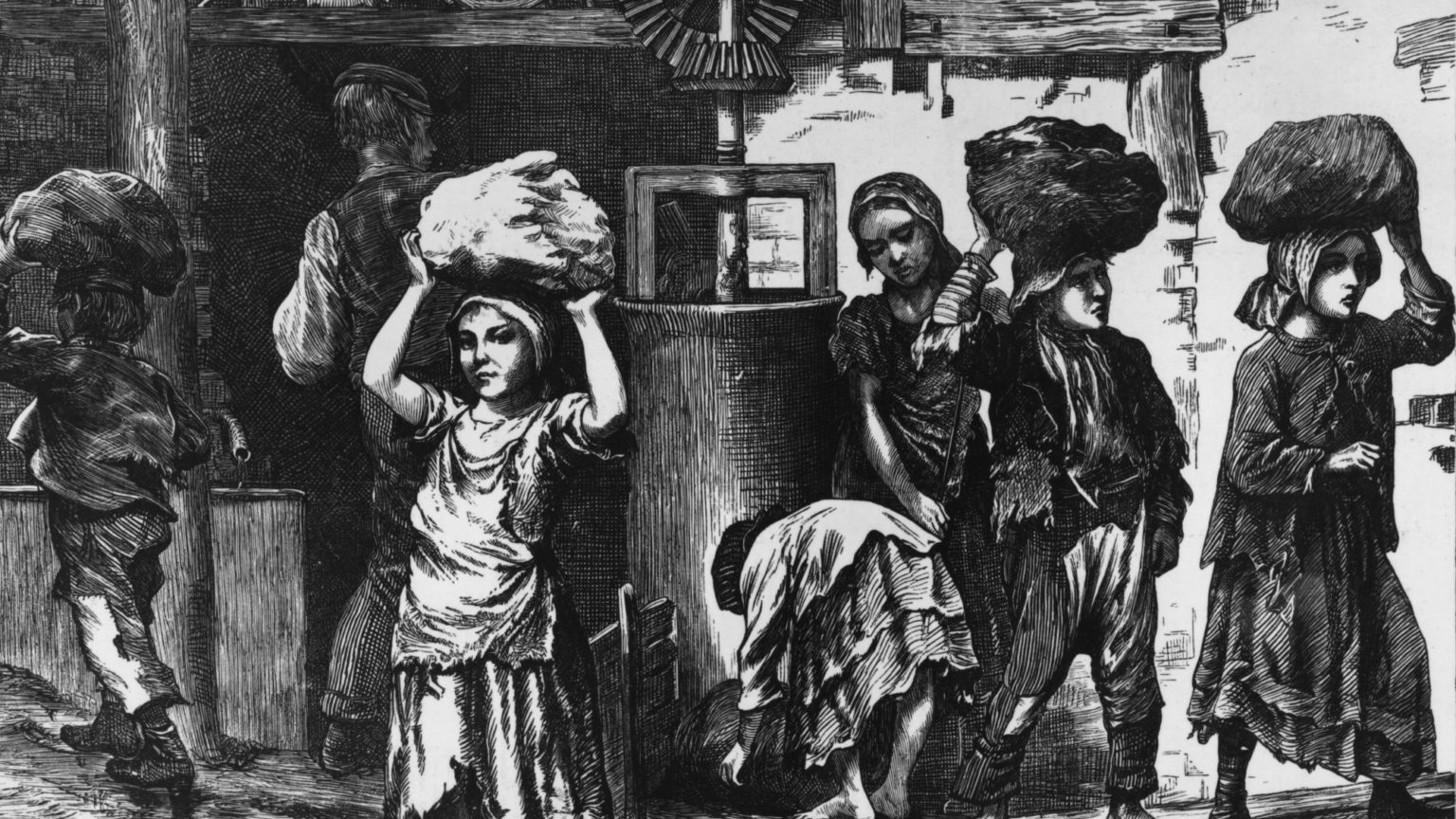 One of the main arguments of the Black Lives Matter movement is that the legacy of slavery continues to inform ‘white privilege’ and structural racism today. It is an argument that is both historically illiterate and wilfully disingenuous.

The truth is that there is no relationship between slavery and white privilege. Slavery benefitted the emerging capitalist class of the 17th, 18th and early 19th centuries and no one else. Contrary to the BLM narrative, the history of slavery – and its relationship to the emergence of modern capitalist society – provides powerful grounds for overcoming racism, not perpetuating it.

That slavery was barbaric is beyond question. The routine treatment of human beings as little more than cattle to be bought in a market and worked until death was abhorrent. But slavery was a social and economic phenomenon, not a racial one. Indeed, English cotton-mill owners initially introduced not black, but child slavery in England. In fact, as Karl Marx showed, it was American capitalists’ attempt to rival their European competitors that led to the transformation of America’s patriarchal slavery system into a brutal, commercially exploitative one, in which black slaves were quickly worked to death before being rapidly replaced.

This is not to downplay the horror of slavery. It is to draw attention to the relationship, and difference, between a society based on slave-labour and one based on wage-labour, or as Marx called it, ‘the veiled slavery of the wage workers’.

Under a system of wage labour, as opposed to slave labour, the goal and mode in which surplus-labour was being extracted from the actual producer, the labourer, was changing. Under the emerging capitalist system, of which England was in the vanguard, the purpose of surplus-labour was not simply to obtain a greater quantity of useful products (which is what slave-based production aimed to achieve). It was now a question of the production of surplus-labour itself. The expansion of capital was now the dynamic underpinning economics.

Yet this difference in the form of labour, between slave-labour and wage-labour, should not conceal what they both shared. As Marx highlighted, even in the heartland of capitalist England, capitalists’ drive to overwork wage-labourers was as strong as slave-holders’ drive to overwork slaves. Marx drew attention to the rapid death and replacement of workers in the bakeries of London, the potteries of the West Midlands, and the cotton mills of the North West.

The working to death of slaves and emerging ‘wage slaves’ was not sustainable, however. Destroying the labourer was self-defeating. As capitalism industrialised and transformed early production into fully fledged factory production, and labour became more productive, so, too, did the extraction of surplus labour time. Industrialisation meant that the time it took to produce the commodities necessary to maintain the life of the labouring classes decreased. This meant that as capitalism developed into the regulated form with which we are more familiar today, labour became more exploited, not less. Slavery eventually disappeared because it could not compete with the surplus-labour extraction of advancing industrial capitalism.

This may sound counter-intuitive. We tend to associate exploitation with slavery, and with brutalised and dehumanised working conditions. We assume that workers in sweatshops in Bangladesh are the world’s most exploited. And it is true that the conditions in which they work are often horrendous. But workers in the more advanced countries were actually more exploited because they needed less time to reproduce their means of subsistence. This meant that more of the working day was spent producing surplus labour, and therefore the potential wealth that would accrue to the owner of capital, once the commodities were exchanged in the market. The growth of capitalism and the accumulation of wealth in Britain was driven primarily through precisely this process: the extraction of surplus labour drawn from English as well as other labourers around the world.

Again this relationship between actual slaves and wage slaves is important. Under capitalism, the slavery of the labourer is disguised through the wage form. The fact that there is a contract indicates that what is being bought and sold is not the labourer, but the commodity he or she owns – his or her labour-power. The wage contract extinguishes every trace of the division of the working day into necessary labour and surplus labour, into paid and unpaid labour. All labour appears as paid labour. Under slavery, the slave still has to reproduce his own means of existence, his own value, yet all labour here appears as unpaid labour. When English free-traders and anti-slavery campaigners protested this injustice in the US, decrying the fact that slaves ‘worked absolutely for nothing’, Marx wryly pointed out that these champions of freedom should have compared the daily costs of slaves with that of ‘free’ workmen in London’s Eastend. In both slavery and wage-labour, surplus labour is the source of the wealth of the owner of the means of production. It is just that ‘free’ labourers were a greater source of capitalists’ wealth than slaves were.

Yes, slavery also yielded great wealth. It formed the basis for the growth of cities like Bristol and Liverpool. For instance, the South Sea Trading Company, which was set up in 1711, for investment in the slave trade and in plantations, proved to be very popular and rose rapidly in value. This led to the first ‘boom and bust’ in Britain, the South Sea Bubble of 1720. But the beneficiaries of this were not white ‘free’ labourers. The profits, indeed, the privileges, from the South Sea Trading Company, were spread throughout the upper classes.

The wealth generated by, say, the South Sea Trading Company, did fuel conspicuous consumption among the rich. And some of this wealth no doubt also found its way into the factories of England, Wales and Scotland. But the subsequent expansion of British capitalism was driven by the ruthless exploitation of mainly white wage slaves, not black slaves. Wage slavery was a misfortune, not a privilege.

And this is the point. Objectively speaking, black slaves had much more in common with ‘free’ white labourers than their skin colour might have suggested. They had a common enemy, and one who rapidly understood how important race was to the future. The development of independent working-class politics in the US and England was always hamstrung by racism and the legacy of slavery. As Marx said of America: ‘Labour cannot emancipate itself in the white skin where in the black it is branded.’ Which is why he was so optimistic when slavery was abolished after the Civil War. A common struggle was now possible that would unite workers across the colour line. Indeed, an early cause for optimism arrived with the general Congress of Labour at Baltimore, on 16 August 1866. Its declared goal was to free workers of all colour from slavery, by launching a fight for an eight-hour day across the whole of the US.

Sadly, racism has long been used to divide the working class. And the beneficiary of such racial division has always been the capitalist class. Even in South Africa, the colour bar in industry under Apartheid, which gave white workers more rights and higher living standards compared to blacks, did not liberate white workers from the yoke of capital. In fact, what South Africa proves is that capital is colour-blind, both in terms of ownership, how it operates and who it exploits. Its only concern is the extraction of surplus labour time – even from nice white middle-class university graduates.

South Africa’s current president, Cyril Ramaphosa, understands this well. At one time, as the general secretary of the National Union of Mineworkers (NUM), he fought for the rights of black mineworkers against Apartheid oppression. But after the end of Apartheid, Ramaphosa changed sides, and became one of South Africa’s wealthiest capitalists. As a board member and shareholder of Lonmin plc, the platinum-mining division of Lonrho plc, he behaved not unlike a Southern slave-owning plantation boss. He demanded strong police action against black workers who went on strike for a living wage at the Marikana platinum mine in 2012. Everyone knows that Ramaphosa got his wish – the Marikana massacre – where 34, non-armed black strikers were gunned down in cold blood by armed South African police. Despite TV footage and Miners Shot Down, Rehab Desai’s brilliant documentary about the massacre, there were no demonstrations or mass protests around the world. It seemed that in 2012, black lives did not matter, especially in the ‘Rainbow Nation’ crafted by Nelson Mandela. Whose privilege was on display in the Marikana massacre?

None of this is to diminish the horrors of slavery. But it does show that ‘white privilege’ is a myth, and that slavery and wage slavery have their common roots in the drive for surplus-labour and the enrichment of a minority. This suggests that there is a common interest between white and black; a common enemy we should be easily able to identify, provided we stop thinking racially.