How the media made the crisis even worse

Covid-19 has brought the conformism, apocalypticism and self-importance of the media to the fore. 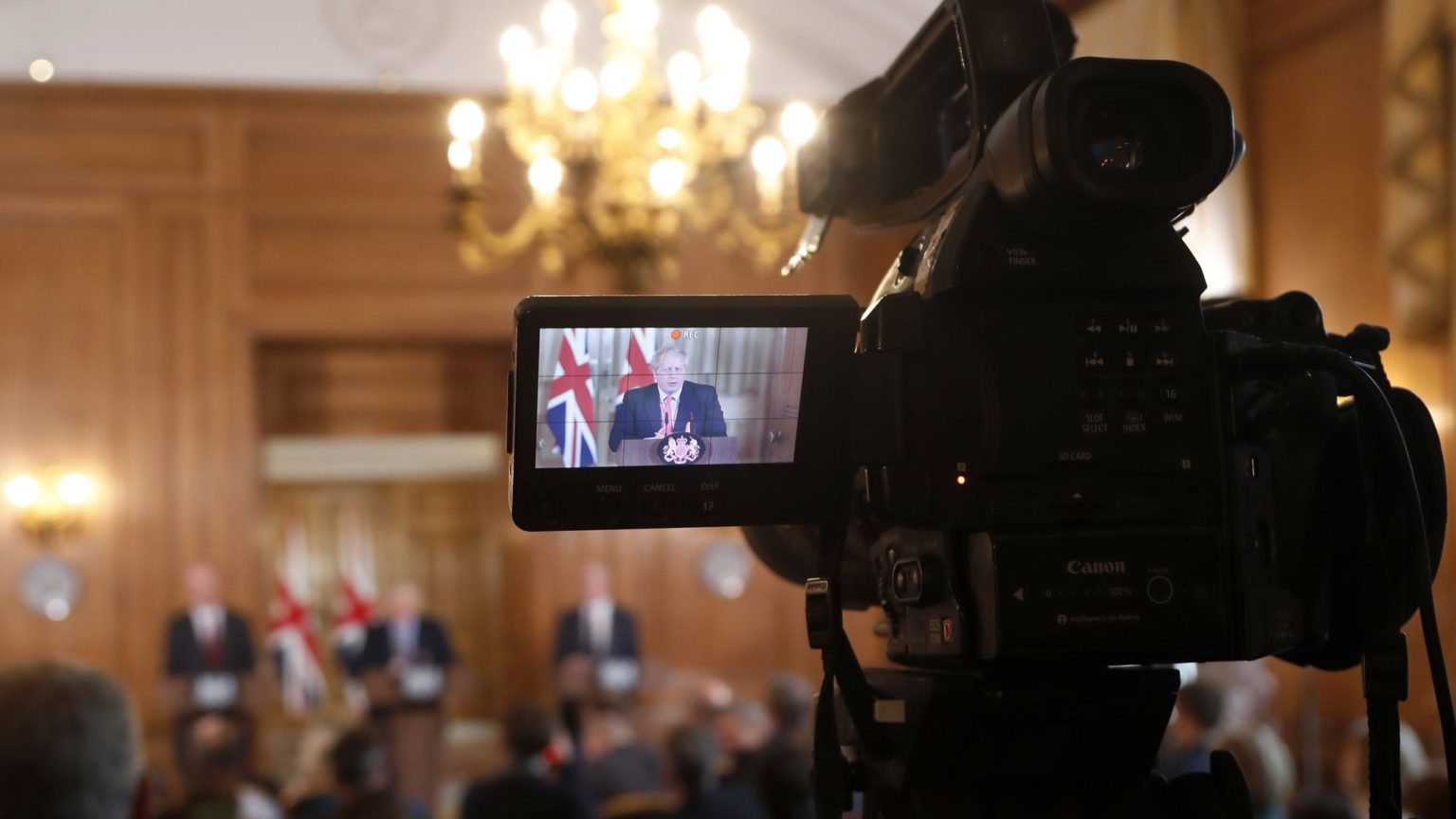 The news media in the UK and worldwide has rarely seemed more important or influential than during the coronavirus crisis. Web searches for ‘news’ have hit record highs, with Covid-19 dominating more than any issue on record.

The British government lists journalists as ‘key workers’; media sources praise them as the ‘unsung heroes’ of the crisis. Top news correspondents have become the main public interface with the authorities, questioning government ministers and experts in front of millions at daily briefings. When The Sunday Times published a lengthy attack on the UK government response to coronavirus, headlined ‘The 38 days when Britain sleepwalked into disaster’, the UK government felt obliged to issue an unprecedented rebuttal of the allegations that was almost as long.

The coronavirus crisis has clearly demonstrated the value of good journalism. Yet the response of too much of the media has also shown how bad journalism can help to make a terrible situation even worse.

Here are a few quick notes on some problems with the media response to Covid-19. Most of these issues are not new. The crisis has acted as a catalyst and accelerated some dangerous trends that were already becoming evident in the media BC – Before Coronavirus.

The coronavirus crisis is quite real and bad enough. It surely does not need any sensationalism or exaggeration. Yet too often it has seemed that the worst-case scenario makes the best and biggest headlines. When a senior war correspondent from a top British newspaper can write that, in corona-hit London, ‘popping out to buy milk might prove as deadly as driving on Kabul’s most suicide-bombed road’, you know that journalism has taken a wrong turn towards apocalypticism.

From the start, too much of the media has seized one-sidedly on the most unrestrained (and unrealistic) estimated death tolls. Morbid daily reports have casually mixed up the numbers dying ‘from’ and ‘with’ coronavirus. (In this, as elsewhere, the experts feeding the media are often as much to blame as any news outlet.) News reports have singled out the atypical deaths of a few younger people with no known health problems, downplaying the fact that those dying with Covid-19 are overwhelmingly elderly and infirm. The result of Apocalypse News has been to further inflame public anxieties.

The news media should put information before the public – not put the fear of God into them.

Who elected the Media Party?

In recent years, sections of the UK media have openly regarded themselves as ‘the real opposition’ to powerful governments – first to Tony Blair’s New Labour, and now to Boris Johnson’s Conservatives. Self-important media outlets have crossed over from ‘speaking truth to power’ to assuming that they should have the power to tell governments what to do.

Nowhere has this been more evident than during the coronavirus crisis. Media big-hitters claiming to speak for the people have repeatedly demanded that the government follow their instructions and ‘act’, often with scant knowledge of what the outcome might be. The overwhelming pressure of this shrill Something Must Be Done journalism quickly helped to push the UK government into changing tack and imposing a general lockdown, with far-reaching consequences for society. It will also make it hard for the authorities to relax the lockdown anytime soon, faced with a chorus of media disapproval.

The news media’s job is indeed to hold the powerful to account. That should not be confused with the unelected, unaccountable media holding the reins of power.

Before lockdown, much of the media reacted furiously to the suggestion that the UK government might pursue a policy based on developing ‘herd immunity’. They have shown no such resistance to another outbreak of a powerful herd instinct in their own ranks, imposing an air of certainty and conformity on a situation where uncertainty reigns and we should be questioning everything.

Conformism has been a developing trend in the UK media for some time, as the range of ‘acceptable’ opinions narrows; the rows over Brexit provided a rare and welcome exception. The coronavirus crisis, however, has brought conformism to the fore as never before. With a few honourable exceptions, media outlets from left to right began by parroting the same line about the need for a general lockdown and echoing the same expert instructions on what we should and should not be allowed to do. Until recently there was little space for alternative outlooks or interpretations, however expert or well informed they might be. To be ‘radical’ in this climate has often come to mean simply being shriller in shouting the same conformist message.

The job of journalism should be constantly to question everything – not to come up with one answer beforehand and insist everybody ticks the same box.

In a crowded field of media outlets deserving of criticism over their coronavirus response, the BBC stands out as the worst. The corporation has turned itself into a rolling public-information announcement, constantly lecturing us about how to behave and beating the lockdown drum. The BBC has tried to recreate its role in the Second World War, as the propaganda wing of the state’s war effort.

The aim has been to establish the BBC as the voice / conscience of the nation, a sort of media equivalent of the NHS – and hence hopefully to protect it from further attacks by the Conservative government. The result has been to relegate objective news coverage in favour of hectoring and heartstring-tugging. Some have reportedly become hooked on the BBC’s constant coverage; others among us have turned off, probably for good.

In Nineteen Eighty-Four, we might recall, George Orwell based Big Brother’s propaganda department on his wartime experience of working at the BBC. We don’t need another Ministry of Truth.

Speaking of the BBC… It is impossible to separate the media response to the coronavirus crisis from the Brexit wars that preceded it. The most virulent Boris-bashing and Britain-bashing has come, predictably enough, from the hardcore Remainstream media that spent more than three years trying to undermine and overturn the democratic vote for Brexit.

Now the Remainer elites have seized upon this terrible crisis as an opportunity to wreak their revenge on Brexit and Brexiteers, blaming Boris’s government for everything and scoffing at the idea that Britain can survive as an independent sovereign nation. It is as if they hope a virus can succeed where they failed.

The ‘Journalism of Attachment’ and emotional correctness

More than 20 years ago, as the editor of LM (née Living Marxism) magazine, I wrote two pamphlets warning against the rise of ‘the Journalism of Attachment’. Martin Bell of the BBC, who coined the dread phrase, championed it as ‘a journalism that cares as well as knows’.

In response, I observed in 1998 that the news media were increasingly covering big stories at home and abroad ‘in a tone that can best be described as emotionally correct. The media’s self-regulating code of emotional correctness insists that only one line can legitimately be followed on the story of the day, and that anybody who questions the emotional orthodoxy should be silenced as a heretic.’ This powerful and dangerous trend raised the question, ‘what is the role of the news media today? To report and analyse, or to emote and moralise? To act as a source of information and a forum for debate, or as a pulpit for sermons and a public confessional?’

Twenty-odd years later, the response of much of the media to the coronavirus crisis has apparently answered that question with the triumph of emotional correctness.

The fashionable criticism of the media, as embodied by Harry and Meghan, is that it is too free to cause trouble. The truth is that we need the media to be more free – to raise awkward issues, encourage open debate, and question everything.