The Brexit divide was not caused by ‘poor communication’

The Other Side, a new book on design and Brexit, says little of note about either. 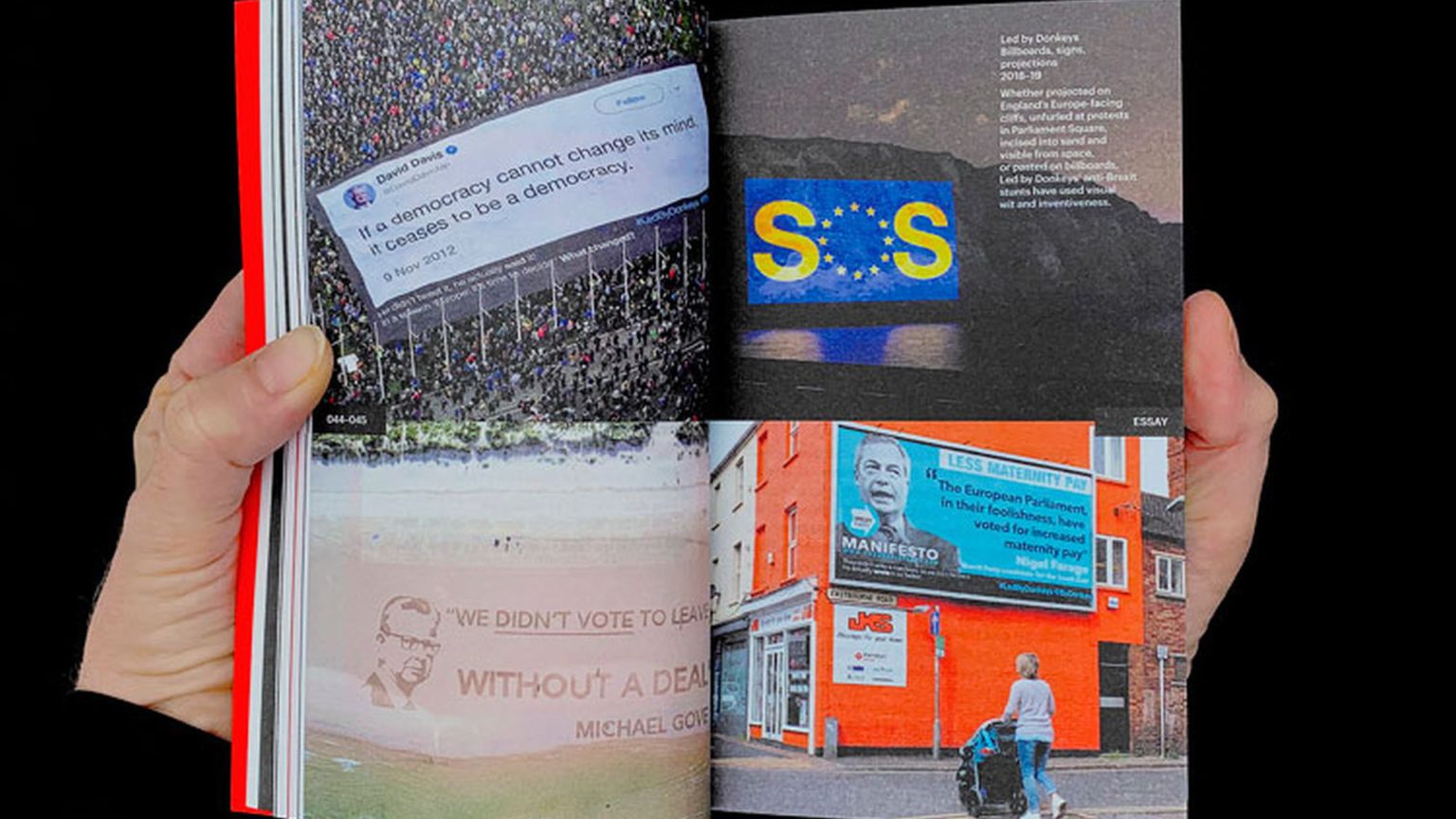 The Other Side: An Emotional Map of Brexit Britain is the latest release in a small tranche of publications from the London-based graphic design duo, GraphicDesign&. Other subjects include religion, mathematics, health, literature and social science. Its mission is to ‘explore how graphic design connects with the wider world and the value that it brings’.

The Other Side is a ‘double-end’ book, designed to be read from either end, hoping not to be biased toward either side. It reads ‘Remain’ one way and ‘Leave’ the other. Alongside design, it includes 50 contributions from the voting public – there are 24 from Remain voters, 26 from Leavers.

The book is edited by Lucienne Roberts, an author and practising graphic designer committed to a ‘socially aware agenda’, and Rebecca Wright, a design educator, writer and dean of academic programmes at Central Saint Martins. Roberts and Wright were among the ‘50 Creative Leaders 2017’ according to Creative Review magazine. Both voted Remain.

At the book’s core is an insistence on the ‘crucial role of visual communications’, and ultimately its failure to ‘get beyond the divisive rhetoric’ that has dominated Brexit Britain since the vote. The Other Side is the proposed antidote – ‘to encourage empathy, not change minds’.

At first sight, this call for empathy seems like a noble instinct. In the abstract, who could disagree? In the popular imagination, we tend to empathise with the sick, the elderly, the infirm and the downtrodden. In the private sphere, empathy can translate into moral and practical support for those close to us and a greater appreciation of community. But the use of ‘empathy’ in the design context is rather different and is actually quite insidious.

The concept of empathy – as opposed to engagement – is based on a contemporary and widespread view among the design elite, that their audience – the public – is damaged, to be pitied, re-evaluated, re-educated, repackaged and controlled. In design circles, empathy has become a by-word for behaviourism and paternalism.

In its search for authority, the design elite has concentrated its intellectual efforts on convincing business and policymakers of their skills in educating, cajoling and controlling the public to behave like good citizens. The current design elite has built what authority and influence it has, inside and outside the industry, on the idea that the audience for design is incapable, ill-equipped, malleable and passive, if not downright dangerous. The people are viewed not as a mass of agents of change, but as an unwieldy mass that needs changing.

Ethical and social design, sustainable design, design thinking and nudge theory have all become the primary weapons of choice. The very real and important contribution being made by designers in the visual, social and cultural sphere, when considered at all, is now seen through the lens of paternalism.

From a graphic design and communication point of view, The Other Side, like much design writing and criticism, is too focused on form detached from content. One of the book’s main focuses is typography. There is a great deal of banal discussion about the usage of a variety of sans serif fonts. For the design audience, this offers little of substance to engage with. For a broader readership, it will more likely bemuse rather than elicit a new appreciation and interest in the vital craft of typography.

Similarly, where Brexit and the political sphere are concerned, the book’s scope is limited and superficial. What analysis is offered – such as an essay on communication failures and a visual essay on both referendum campaigns – the emphasis is again placed on the ‘how’ and not the ‘what’. For instance, we read that the Leave campaign managed to tap into voters on an emotional level while the ‘the official Remain campaign identity… was accomplished, but failed to connect emotionally with voters’.

It is unlikely readers would learn much from the voter contributions, either. While the views expressed are often articulate, lucid, frank, angry or intransigent, none will come as any great surprise. What people up and down the country thought about Brexit is no great mystery – these voices were there to be heard for anyone who cared to listen.

You will find no reference in the book to the fact that the terms of the post-Brexit debate were set by a Remainer parliament and a hysterical media and commentariat. After the referendum, there was nothing less than a full-blown onslaught against a democratic vote. Brexiteers were cast as racist, anti-immigrant knuckle-draggers. They were denounced as scum, peasants and thick as fuck. At the same time, they were told, Malcolm X style: ‘You have been had. You’ve been took. You’ve been hoodwinked. Bamboozled. Led astray. Run amok.’

From a design and communication point of view, ‘how’ things are presented (form), as important as it is, is never the deciding factor, and is certainly not more important than the ‘what’ (content). The book’s premise suggests that the post-Brexit divisions were caused by bad ‘communication’. This is arrogant and obscurantist. The 17.4million people who voted Brexit were under no illusion about what the elite was communicating to them. This is undoubtedly why, when Brexiteers voted in the last General Election, they did so with two fingers raised to the Remainer elite.

I doubt this book has the necessary weight and insight to engage a wider public in the discussion about why Brexit is and was so ‘divisive’. But nor is it likely to hold much sway in its original mission to put design and communication at the centre of political discourse. The narrative is too superficial. The postmodern impulse of the design elite is to ignore the adage ‘content is king’ in favour of form. It is indicative of a design leadership that overstates the formal aspects of design and communication while at the same time undermining design’s true mediating value.

It is interesting to note that the editors, to their credit, acknowledge that they have been somewhat insulated from differing and diverging opinion. Such is life in the so-called metropolitan bubble. But it is hard to truly be insulated from the profound shocks of the past four years: the historic referendum result, the Brexit Party’s triumph in the European elections, and the crushing majority vote for the reconstituted ‘Get Brexit Done’ Conservative Party, which all happened despite a backdrop of hysterical anti-Brexit campaigning in the media and the courts.

Only time will tell if any of these shocks will lead to a genuine desire to reorient and reconnect with the public on the part of designers, or if this book expresses just a momentary wobble. It would most likely require a few more bubbles to be burst. The creative elites have bound themselves tightly to contemporary illiberal orthodoxies, including identitarianism, design ethics and sustainability. If designers want to engage with a mass audience they need to do so as partners, not as quasi-parents. A good start would be questioning these design orthodoxies.

Alex Cameron is a designer and critic

The Other Side: An Emotional Map of Brexit Britain, edited Lucienne Roberts and Rebecca Wright, is published by GraphicDesign&.