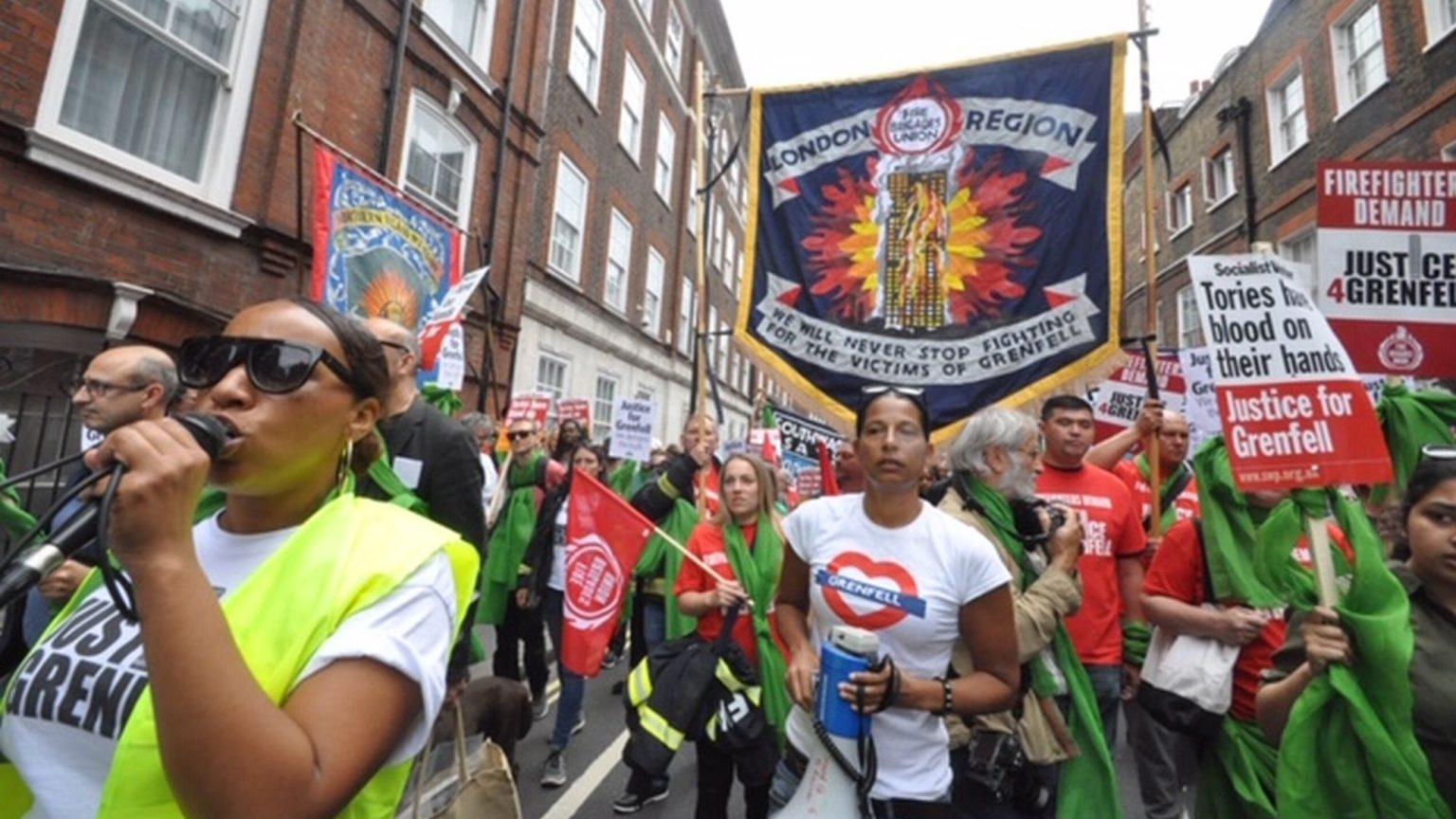 Three of the four candidates for the Labour leadership have signed a controversial pledge card drawn up by the Labour Campaign for Trans Rights (LCTR). Some of the 12 pledges include ‘accepting’ that ‘that trans women are women, trans men are men, and non-binary people are non-binary’ and that ‘there is no material conflict between trans rights and women’s rights’. The pledge card also calls on Labour to expel ‘transphobic’ members from the party and for candidates to ‘fight against’ what it calls ‘hate groups’ such as Woman’s Place UK and LGB Alliance – groups which were established to defend women’s and lesbians’ rights against an increasingly authoritarian transgender movement. Lucy Masoud is a former firefighter and trade unionist, who has spoken at Woman’s Place UK meetings. spiked caught up with her to find out more.

spiked: What did you make of the LCTR pledge?

Lucy Masoud: When I first saw it, I assumed it had been put together by overactive teenagers. But then Angela Rayner signed it and Rebecca Long-Bailey signed it, and more and more started to sign it. I am utterly astounded. Firstly with the tone and the aggression of the statements. It shows no attempt to understand the view of females in this debate and where we are coming from.

Secondly, I was astounded that it name-checked Woman’s Place UK and the LGB Alliance as ‘hate groups’. To suggest that those involved in those groups should be expelled is nothing short of ludicrous. We are talking about people like Kiri Tunks and Ruth Serwotka. These are giants of the trade-union movement. These are people who have been fighting for the socialist cause their whole adult lives. They have dedicated their lives to fighting for LGBT rights, for people of colour, for women, and for the working class. And for them to be threatened with expulsion! The people making those threats are not fit to lick their boots.

Calling us ‘transphobic’ or a ‘hate group’ completely misses the point of the debate and fails to recognise what our argument is. We are not anti-trans. We fight for the rights of trans people. But we are also fighting for the rights of females. And the whole reason Woman’s Place UK was founded was to protect the single-sex exemption in the Equalities Act. We are called a ‘hate group’ simply for trying to protect female-only spaces, for saying that we want domestic violence centres, refugee centres and centres for the victims of sexual violence to remain female-only. It shows those people’s political naivety and downright dishonesty.

The labour movement has a long and proud history of people with different ideas, different opinions, being able to hash those ideas out and come to some kind of an agreement. And if you don’t come to an agreement, that’s fine, we carry on. But for us to be singled out in this way is unbelievable.

spiked: One of the pledges calls for Labour leadership candidates to accept that there is no material conflict between trans rights and women’s rights. Is there a conflict?

Masoud: There is absolutely a conflict when you have this mantra of ‘trans women are women’ being forced down your throat. We should be having a conversation. I do not believe trans women are women because I believe in biology. Some people do believe that and we should be able to have that conversation. To say there is no conflict between trans rights and female rights, is basically saying that trans women and females are the same. And they are not.

Being trans doesn’t mean what it used to mean five years ago. We wouldn’t even be having this conversation because back then being trans meant ‘transsexual’. Now trans is an umbrella term. It basically covers anyone who feels that they are a woman. They could even present as a man and make no attempt to be a female. They could have all the benefits of being male, but if they feel like a woman, that apparently makes them a woman.

The LCTR pledge calls for such people to be accepted legally as women and to be allowed into female-only spaces, which is of course is very concerning for women like myself. I don’t want to have to go into certain areas that are female-only and be faced with a male-bodied individual.

From my own personal experience of working on a fire station for 12 years, females fought tooth and nail to get female living facilities on fire stations. For decades we didn’t have them. We had to share our dormitories and showers with men. Many women left the job because they didn’t feel comfortable getting changed with men or sleeping in the dormitories with men. There was also a culture there where women felt ostracised, even bullied sometimes. Female firefighters would often end up sleeping in their cars or getting changed in offices, and ultimately leaving the job.

Eventually, we managed to secure female-only facilities on every fire station in London. And that’s essential. They need this when they’ve been out on a big job and they come back and they need a shower, or it’s a night shift and they are sleeping in dormitories. Women need to have their own space. And now that’s being threatened because anyone who self-identifies as a female would be able to have access to those spaces.

Now we’re also allowing male-bodied individuals to use the female-only changing space at the Hampstead Heath swimming ponds. Women are using the shower at six o’clock in the morning, and they’re having to stand next to people with penises. Muslim women who have joined a female-only gym are not going to use those gyms anymore because they can’t be sure that at any given time someone male isn’t going to walk into the changing room. People can no longer be sure that their children, when they are getting changed or in a shower area, aren’t going to be presented with a male-bodied individual.

So there is a massive conflict. A frank, honest and open discussion needs to be had because there has to be a compromise out there. But Labour is not even allowing us to have that discussion. It is saying that if you even step out of the echo-chamber view that trans women are women, or if you think that female rights need to be protected and not include men, then we will be expelled from the party that we have campaigned for our whole adult lives.

spiked: Is there a misogynistic element in the attacks on trans-critical feminists?

Masoud: For sure. This argument isn’t coming from trans men, it is mostly from trans women and their supporters, though many trans women agree with us too, like Debbie Hayton and Kristina Harrison.

It is generally not transsexuals but usually people under this ridiculous umbrella term of trans who are attacking us. It is those who think anyone who is non-binary, genderfluid, pansexual or whatever could be deemed to be a woman even if they are clearly a male, present as male and have male genitalia. They are quite a small minority but they have a lot of supporters. And they are the ones hijacking this agenda.

And it is very misogynistic. Women are going to be impacted by this. But we are being completely shouted down. We are being told that they know better than us and that our rights aren’t as important. If you listen to us, we can tell you why trans rights and women’s rights conflict. We can tell you that a female who’s been the victim of sexual abuse and rape may not want to share a centre for sexual violence with someone who is male-bodied, and that little children or teenagers may not want to share shower space with a full-bodied male.

spiked: Can Labour survive if it antagonises women in this way?

Masoud: It hasn’t got a future if it carries on down its current path. It has learned no lessons from the General Election. It had a disastrous policy on Brexit. It ignored the working-class voter and trumpeted the second-referendum nonsense and we saw where that got them. What Labour is doing now is alienating 51 per cent of the population and they don’t care.

I keep thinking about why the hell any Labour leadership candidate would want to sign this pledge. They know there will be a backlash. They have seen the #ExpelMe hashtag sweep Twitter. So why do they do it?

Most likely it is because they know they’re not likely to win the next election in five years’ time, or the one after that, either. So they’re not thinking about winning elections or winning over the general public. All they are thinking about is appealing to the Labour membership who they think will gobble this up.

Each candidate wants to be the most woke. They are appealing to this tiny, tiny minority of the electorate that is obsessed with identity politics. But they do not realise the damage they are doing. I didn’t even vote Labour at the last election and I’ve been a Labour member my whole life. And for someone like me not to vote Labour means it has a massive problem.