A vote for change in Ireland

The shock success of Sinn Féin is a serious blow to the Irish establishment. 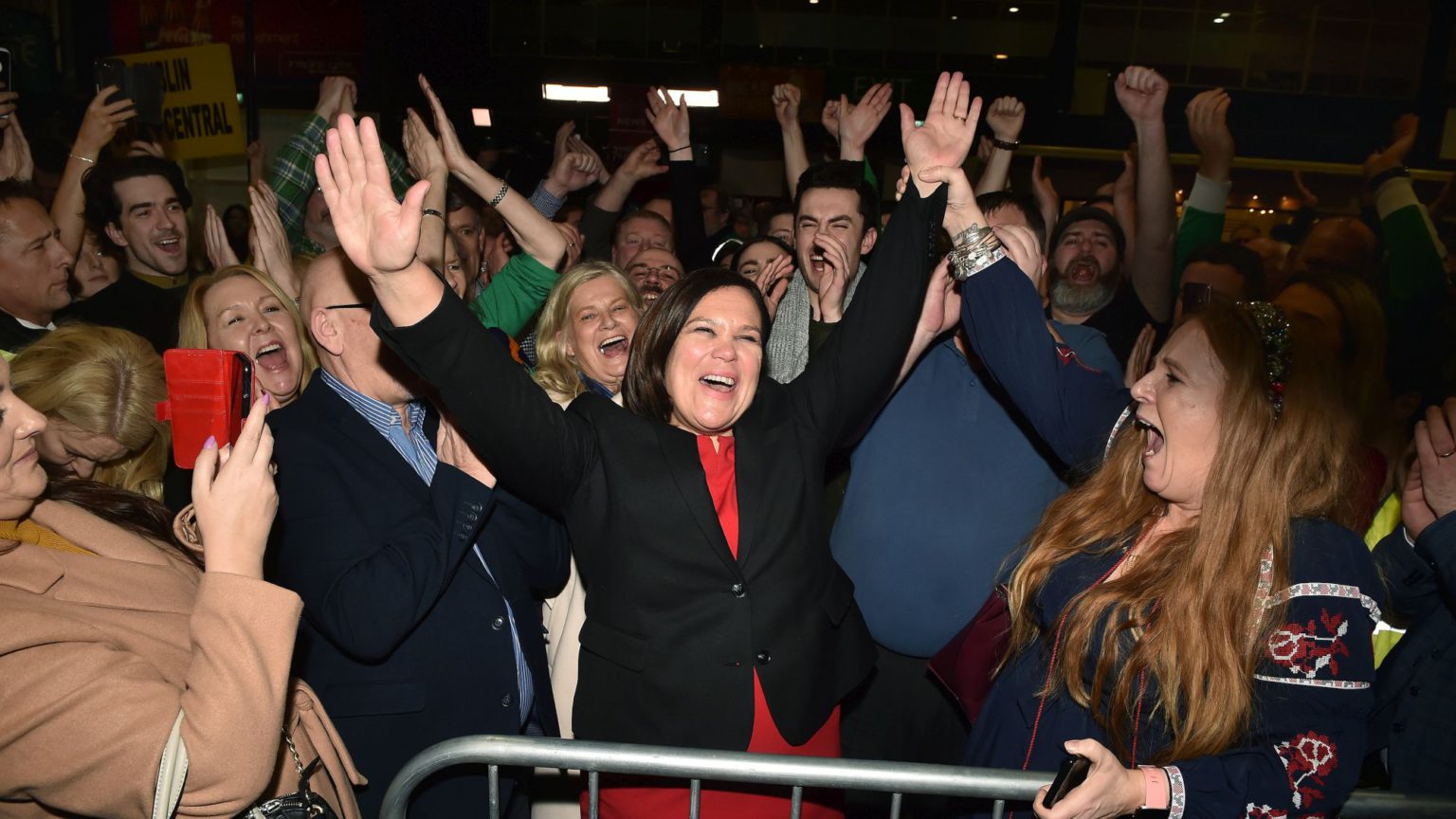 The last time a General Election in Ireland was held on a Saturday was in 1918. It gave a landslide to Sinn Féin, leading to the War of Independence and the establishment of the Irish Free State. This Saturday’s election, while not quite as historic, has certainly sent shockwaves through Ireland, and Sinn Féin again played a leading role.

The election’s significance lies in the apparent end of the two-party system – the dominance of the ‘civil war’ parties of Fianna Fáil and Fine Gael since the inception of the state. On Saturday, these two traditional centre-right parties scraped 43 per cent of the vote between them.

The story of the election was the dramatic rise of Sinn Féin, which came top with 24.5 per cent of the vote. Not even Sinn Féin anticipated the surge in support, such that the party didn’t even field enough candidates to take advantage of the increased vote in each constituency. This initial lack of confidence was perhaps understandable: the party suffered heavy losses in the recent local-council and European elections.

But this weekend all that changed, with Sinn Féin winning seats in areas that it has never won before, including Galway and Tipperary. In places like Westmeath and Wexford, where Sinn Féin members couldn’t even hold on to their council seats just a few months ago, candidates achieved stunning victories, some getting almost 10 times their previous vote.

That the Sinn Féin surge was a rejection of the tired old politics of the established parties became clear in areas where Sinn Féin candidates beat the main party leaders into second place. In Cork, little-known candidate Donnchadh Ó Laoghaire topped the poll ahead of Fianna Fáil leader Micheal Martin, while in Dublin Paul Donnelly knocked Taoiseach and Fine Gael leader Leo Varadkar into second place.

So what explains the huge and sudden surge in support for Sinn Féin? The most obvious trend is the one seen in multiple elections around the world, of a resounding rejection of establishment politics and a vote for change. While Sinn Féin is roundly opposed to Brexit and Trump, its surge in support may well come from the same desire from voters to give the establishment a bloody nose and shake things up.

What has yet to be seen is how resilient the Sinn Féin vote will turn out to be. Was the party just in the right place at the right time, to be the vehicle for this protest vote, or does its newfound support run deeper than that?

The circumstances in which the election was called were not necessarily helpful to Sinn Féin. The Irish economy looked good on paper. Growth is rising and unemployment is low. Leo Varadkar called the election hoping to capitalise on the strength of the economy and public support for his role as an effective Brexit negotiator.

But Varadkar’s gamble backfired, as many voters saw that only the very rich have benefited from the boom and that inequality is deepening. A severe social-housing crisis, and the inability of most young middle-class people to get on the housing ladder, has turned younger voters off the mainstream parties.

Meanwhile, the gruesome death of a young teenage boy in a drug-related killing exposed the scale of the drugs problem, and made organised crime a major election issue. When a council vehicle almost killed a homeless man sleeping in a tent beside the Grand Canal in Dublin, it shone a spotlight on the dire state of Dublin’s homelessness problem.

These issues painted a different picture, and the election became dominated by discussion of the harsh consequences of the neoliberal economic policies pursued by Fine Gael, with the acquiescence of Fianna Fáil.

Some of Sinn Féin’s candidates were well paced to benefit from this. Housing spokesperson Eoin Ó Broin, for example, emerged as a brilliantly articulate operator during the election campaign, often running rings around Fianna Fáil and Fine Gael spokespeople in media debates.

The appalling state of the health service was another big issue, especially for working-class people. And Sinn Féin’s health spokesperson, Louise O’Reilly, was another rising star of the campaign. Astute and on top of her brief, she won the backing of angry voters as she ruthlessly challenged the health minister in repeated TV and radio discussions.

Sinn Féin leader Mary Lou McDonald has surrounded herself with a compelling and charismatic group of politicians who voters clearly like and believe will deliver change. In economic and finance spokesperson Pearse Docherty, Sinn Féin has one of the most able politicians in the country.

This all helped Sinn Féin to break out of its traditional working-class base, and win over different demographics to vote for them for the first time. The party now has the overwhelming support of 18- to 30-year-olds and leads in every age group under 65.

As the surge in support for Sinn Féin started to become clear, panic set in among the establishment. In a bid to dissuade potential first-time Sinn Féin voters, who some thought might be unaware of the party’s former links to the IRA, politicians and the media dragged up the most grievous and tragic ‘IRA atrocities’, including alleged punishment shootings and rapes.

But as the votes were counted this weekend, the voters of Ireland once again demonstrated that cynical smear campaigns no longer work. In the end, it was not Sinn Féin’s history that the voters cared about – it was the record of the two parties, Fianna Fáil and Fine Gael, who have dominated politics for almost 100 years.

The electorate of the Irish Republic is more interested in looking forward than back. The Troubles are over. Growing numbers of people are fed up with what they perceive to be the unfairness and selfishness of the Tweedledee and Tweedledum politics of Fianna Fáil and Fine Gael.

For better or worse, the Irish people, in large numbers, voted for what Sinn Féin called its ‘radical republican programme of change’. Time will tell if it was a wise choice. But as we head towards the centenary of the partition of Ireland, the old political mould has been shattered and it is all to play for.