The slovenly language of British politics 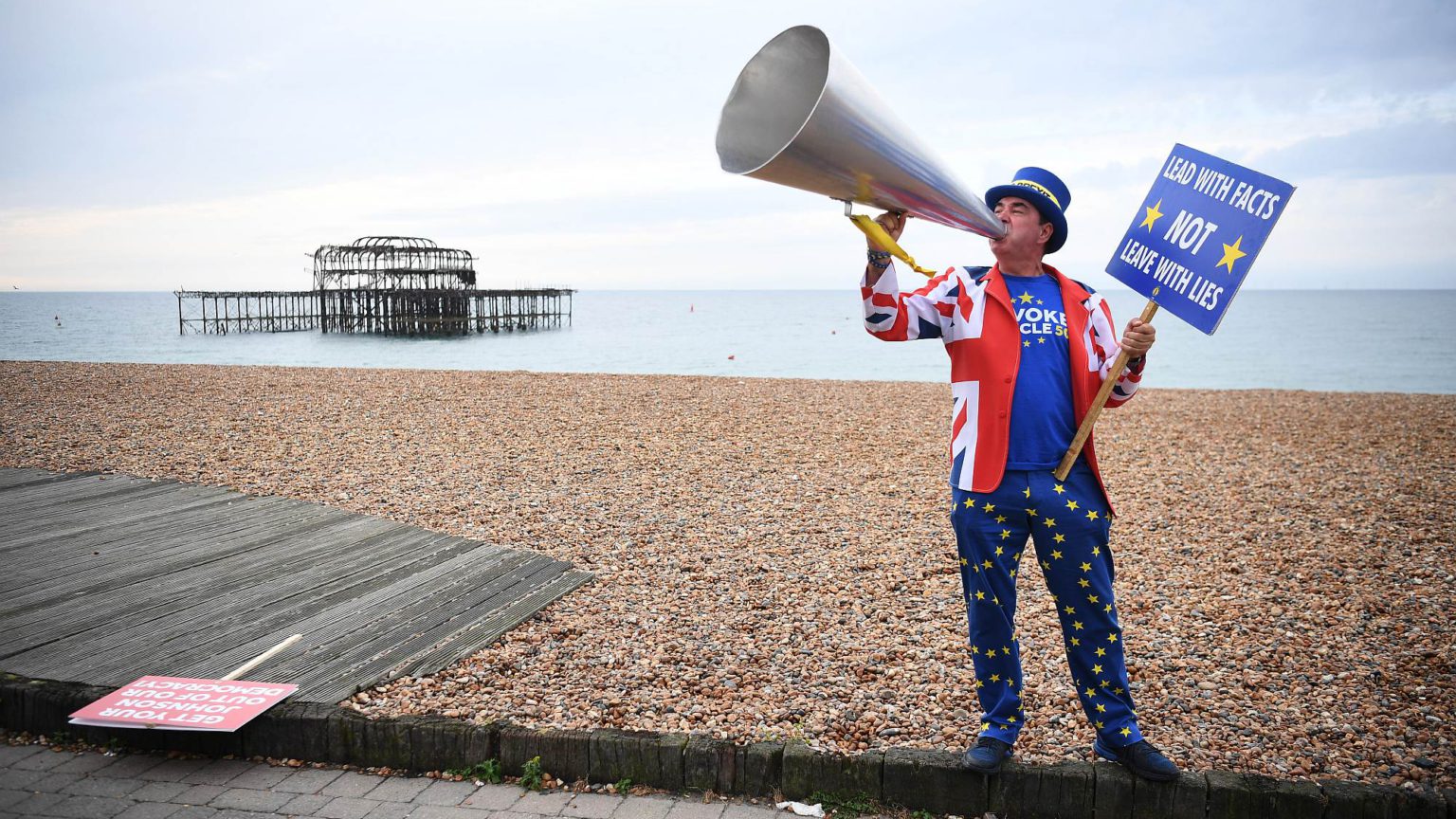 Politics always involves language and the control of language. In his essay ‘Politics and the English Language’ (1946), Orwell pointed out how slovenly language made for slovenly politics. In Nineteen Eighty-Four (1949), he warned also against the manipulation of language in order to misrepresent reality. As our politics is being recast, we need to speak plainly and artfully to each other.

Things are moving so fast it may seem perverse to freeze the frame and go back to 29 September. But academics are supposed to be perverse, and anyway this piece is really about language, not politics, so I’m allowed to be picky. I want to pick out a moment when Andrew Marr, the BBC’s lead political interviewer, accused the prime minister, Boris Johnson, of something to do with death threats.

Well, not making death threats as such. Marr put it to Johnson that he was saying things that had been, or could be, death-threatening in their consequences. It’s hard to tell just what was being put. This was not a court of law. It was a television studio, and all sorts of funny things can happen in a television studio.

Marr started by asking Johnson if he knew the murdered MP Jo Cox. This immediately personalised the subject and raised the stakes. He then reminded Johnson that he had responded to Labour MP Paula Sherriff’s impassioned appeal about death threats against her and other MPs by saying ‘humbug’. Then, across a series of interruptions, Johnson was accused of ‘whipping up’ bad feeling in the country, of ‘playing with fire’, of inciting violence, and of (sounding like he was) threatening an uprising unless he got his way.

The raw power of politics comes not in the written word but face to face, and it was face to face that the BBC was asking the prime minister to apologise for insulting the memory of a murdered MP, for stoking violence and threat, and for not keeping his head when all others were losing theirs. Was he not sorry? Would he say sorry? Surely he could find it in himself to say sorry? Did he get it?

It was a disturbing 20 minutes, both in the vagueness of the charges and the hostile manner in which they were put. Johnson can speak for himself, and he did. But note: our politics have got to such a pass that the prime minister can be accused of being responsible in vicarious ways for death threats made by madmen, and murders that have yet to happen, also by madmen, and no one should be in doubt that if one should happen, God forbid, he would be the prime political suspect. It’s a long way for a small word, ‘humbug’, to travel.

There are three issues here. First, it is clear, or should be clear, that in response to Sherriff’s frantic request that the prime minister should calm down, Johnson was saying ‘humbug’ not to the fact, or to the idea, of Jo Cox’s murder or Sherriff’s fragile state, but to the notion that his use of language was responsible for future murders, or death threats, or both. This was a bad day at the office for Marr. Johnson was correct. The main reason for the breakdown of normal politics in this country is the failure of the political elite to carry out a democratic decision.

As a student, I believed in Antonio Gramsci’s concept of ‘hegemony’. As a man I didn’t. These days I’m not so sure. The hegemon might be back. It’s not the BBC, of course, a corporate body that often finds itself caught between. Nor is it the Daily Mail or the Sun, which are minority tastes, quite unable to produce the nascent philosophy that hegemony requires. No, if there is hegemony, the universities could be part of it, and it is certainly true that our politicians’ key relationship is not with the people, but with the media, but these are other stories. It is hard to name the nameless, but it is something to do with the thinking of a self-appointed intellectual family that believes itself to be not only morally and culturally superior, and progressive, but self-evidently so, to the point that it has forgotten how democratic politics works (by division) and what it is for (to make decisions).

Second, and far more pressing, something bad has happened not only in the body politic but in the use and abuse of social media. MPs used to live freely among their constituents. I once saw David Miliband and his agent sitting alone at a table in Asda, and reflected on the good sense of the British people. But now MPs are being abused and threatened. We need to think about how this can be stopped in a society that remains free.

The third issue concerns our ability to speak clearly. How many politicians, or journalists, can honestly claim they have never spoken in order to rouse angry feelings? We need not less inflammation, but better inflammation; not cheap name-calling, but analysis; not groupthink, but art. Ken Loach’s politics leave me cold, but his art is different. Watch his latest film, Sorry I Missed You, for clear speaking on current discontents.

In Orwell’s essay ‘Politics and the English Language’ (1946), he pointed out how slovenly language made for slovenly politics. In Nineteen Eighty-Four (1949), he warned against the manipulation of language in order to misrepresent reality. Airstrip One, you will recall, is presiding over the misrepresentation of the English people to the point of their own extinction. Three years of Brexit have given us plenty examples of slovenliness and misrepresentation. In the mouths of Remainers, ‘crashing out’ and ‘off the cliff edge’ have long since replaced plausible economic speculation. In the mouths of Leavers, ‘taking back control’ has long since replaced consideration of what we will be able to control after Brexit that we couldn’t control before (immigration for instance). We have ‘hard right’ for governments that believe in borders, unless they are EU borders. And we have ‘populists’ for democrats, unless they are People’s Vote democrats. ‘Peace in Northern Ireland’ invokes not peace but the veiled threat of violence. ‘Deal or No Deal’ is the question now, but never was the question then. A ‘People’s Vote’ means a second referendum. ‘Trust the People’ a second time means not trusting them the first time. ‘Integrity of the Single Market’ means integrity of the European state, if it is a state, and it is they who want an Irish border, not the British.

As for inflammatory language – and some of the above is inflammatory, and Orwell was inflammatory, and Ken Loach is inflammatory – both sides match each other, although that does not make them wrong. Boris has a voice, he is the prime minister, and you can see why his opponents would want to control that voice – although he is making a pretty good job of that himself with moronic repetitions of the same slogans. As for Jeremy Corbyn — Labour decided not to have a voice on Brexit when it decided to abandon working-class patriotism and declare itself the party of middle-class dissent.

Orwell’s Nineteen Eighty-Four described the degradation of a nation by the systematic degradation of its language. Language was being nullified and ways of being human with it. Big Brother wanted to control everyone, including nature, by the manipulation of language, truth and logic. Orwell called propagandists ‘gramophones’, because in his day, political debate was led by a few score men at the top while the rest listened on. This is not what is happening now. We live in a world of news, fake news, marketing messages, tweets, Facebook and curated opinion – all salami-sliced into each other, not easy to discern, and tedious to trace. There is no Big Brother, only Cambridge Analytica.

However, like Winston Smith, we also live in an age of binaries that signal whether we live or die. Truth or untruth, plusgood or ungood, party or prole, leave or remain, woke or unwoke — they call us up and call us out. No in-betweenies or bit-of-eachies. No maybes, live-and-let-lives, or think-agains. Absolutely no history or tradition. A major British university, my own, has recently announced its intention to decolonise itself.

Not mindful of history but very keen on virtue, our New Puritans want to make the world over again by policing how we speak and keeping a ledger of what we have said. No one is safe from this, including them, but in Boris’s case we know the triggers. ‘Privileged white guy’ is not a good start. ‘Racism’ is being trailed. ‘Humbug’ will stay with him forever. Every woke knows what ‘Bullingdon’ means. ‘Crimethink’ is Boris’s original condition. In order to be redeemed, he must stop himself short and keep on controlling his thoughts. He must say sorry to the nation. He must admit his guilt to the BBC. He must atone for who he is. Orwell, another old Etonian middle-class white guy, knew all about this.

Boris’s deal splits Northern Ireland from the Union, and, in terms of working our way back to political stability, it is definitely more ungood than doubleplusgood. But we are living through a Hobbesian moment where we need to act quickly and decisively. Behind all the tactics and bad faith, the basic facts have not changed. In 2016, parliament asked those it represented what it should do, and for a variety of reasons – all factional – it refused to do it. Orwell said we were a family with the wrong members in charge. Now we look like a family with no one in charge. In the words of the great Hank Williams, we have to move it on over.

Robert Colls is professor of cultural history at De Montfort University, and author of George Orwell: English Rebel, published by Oxford University Press. (Buy this book from Amazon(UK).) Hiis This Sporting Life: Sport and Liberty in England, 1760-1960 will be published in May.