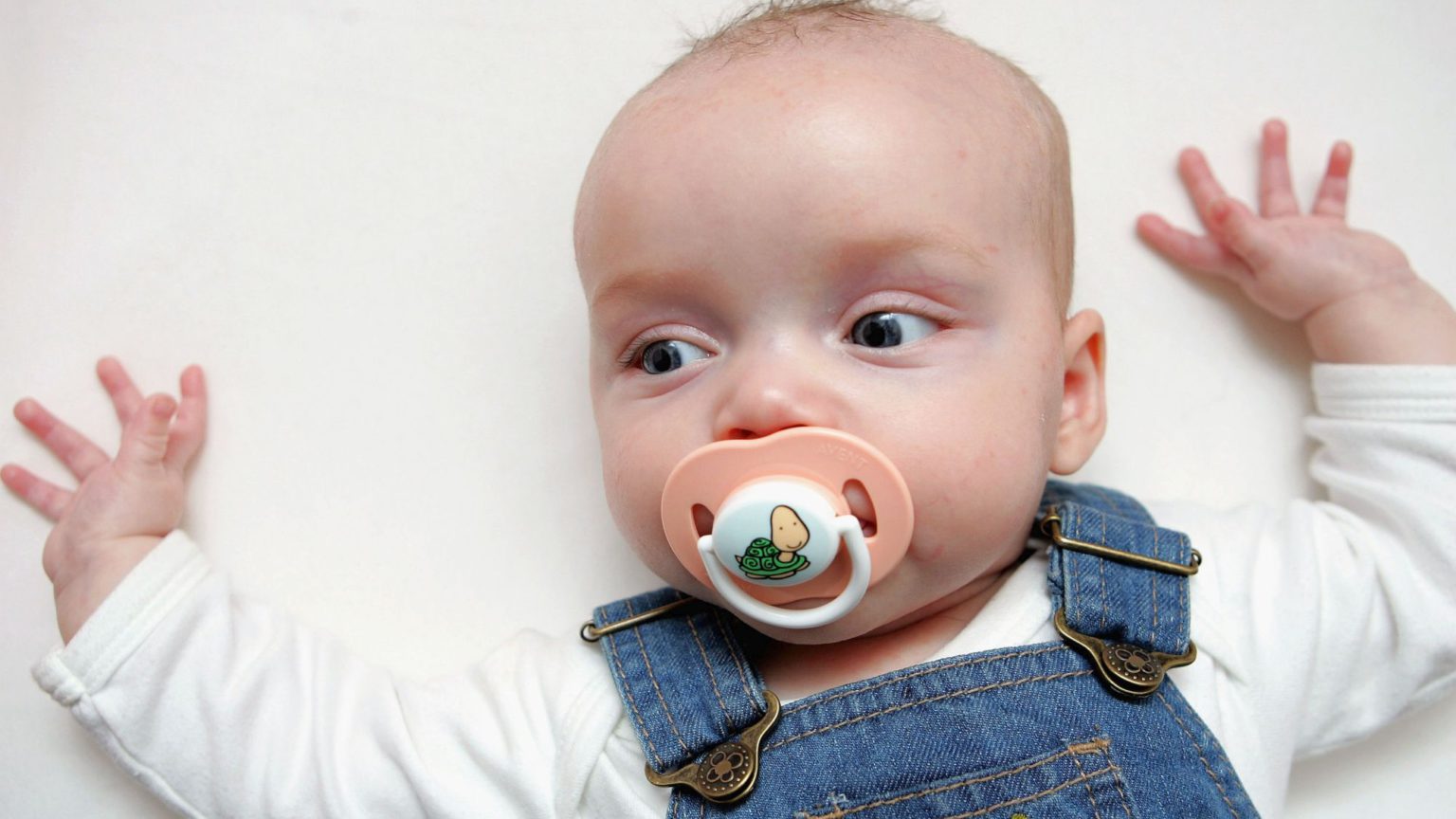 ‘Hi I’m Hazel Dennis, I’m Ari’s daughter, well, demi-daughter… one of the most commonly asked questions is, do I have a mom? Well, I will say no. The person that gave birth to me was Ari, not a boy or a girl, they’re transgender. I wish that some people would just accept that I’m not a boy or a girl, I’m part-girl, but I also use they/them. Sometimes I would just wish that someone would ask my pronouns and they would accept it and they would call me a demi-girl and use the right pronouns. Well, It’s hard being a demi-girl but I live with it. Sometimes I think I should become a normal girl but that’s not who I am.’

These words were spoken to camera by eight-year-old Hazel, and broadcast on the Facebook page of her mother, Ari Dennis. Trying to write about Ari and Hazel is linguistically tortuous. It’s not clear whether Hazel is male or female, but I assume her name indicates she is a girl. Ari describes herself as ‘non-binary’, but appears to be a woman who has given birth to two children. The children are being raised in a ‘three-adult household’, which seems to comprise Ari, a large hairy man who sometimes wears a skirt, and a small young woman in a lumberjack shirt. They could be viewed simply as eccentrics, but for their willingness to court publicity and the fact their ideas are given a serious hearing. Ari is indeed setting herself up as the poster girl for ‘gender-neutral parenting’.

A self-proclaimed ‘educator’ in ‘gender creativity’, Ari made the news this year for publicising the fact that Hazel’s younger sibling Sparrow is being raised as a ‘theyby’ – a gender-neutral baby. This doesn’t just mean eschewing pink and blue or choosing a non-gendered name such as ‘Sparrow’ – it also means concealing the baby’s biological sex from other people, and not using gendered pronouns to refer to him or her.

Ari’s neologism ‘theyby’ reveals her nose for a headline rather than her sense of reality. (After all, we already refer to babies in gender-neutral terms, as, well, babies.) Hence while Ari keeps the rather banal fact of Sparrow’s biological sex a secret, even from his or her grandmother, she has allowed international film crews to broadcast herself and her children. There’s something intriguingly twisted about going to great lengths to conceal the sex of your baby while simultaneously exposing your family life to intense public scrutiny in pursuit of a cause which is bound to provoke some public hostility.

Yet the response to Ari is not always sceptical or critical. While Piers Morgan responded with pantomime incredulity, others have praised Ari’s progressive ‘parenting style’. This is not surprising. A Google search for ‘gender-neutral parenting’ generates links to mainstream publications advising how to do it.

Parents undertaking a gender-neutral approach usually aspire to ‘freeing’ their children from rigid gender stereotypes, so that they can ‘achieve their full potential’. But Hazel’s speech to camera serves as a warning of the dangers of raising a child without such a meaningful framework. It means the child is cut off from the frameworks which root him or her in a particular family, and connect him or her to the wider world.

Hazel might be parroting the words of the adults, but there is still something disturbing about her lexicon. She is a ‘demi-daughter’. She does not have a mother, but a ‘person that gave birth to me’. We don’t know if she has someone to call a father. She is not part of a family, but a ‘household’. Elsewhere, she says that she does not refer to Sparrow as her brother or sister, but as her ‘sibling’.

The stripping away of terms such as ‘baby’, ‘daughter’, ‘mother’, ‘father’, ‘brother’, ‘sister’ and ‘family’ is done in the name of increasing individual choice and freedom. Yet it must make it very difficult for Hazel to have a sense of self which is rooted, rather than contingent. The words we use to describe our families are both personally and socially meaningful. ‘My mother’ is highly meaningful to me. It describes someone who is my mum. But ‘mother’ is also universally recognised as a highly meaningful status in general. Likewise, when children taken into care experience social workers referring to their brothers and sisters with the technical term ‘siblings’, they find it disturbingly impersonal. It fails to recognise the deep bonds between children, captured by phrases like ‘my brother’ or ‘my sister’.

Of course lots of families come up with their own unique words for things. Children are given pet-names, which only their families understand, and grandparents are often named by their grandchildren in idiosyncratic ways. But these names are more intimate, more specific to the family, and they reflect the unique bonds between the people in that family. Being a ‘demi-daughter’ does not suggest a stable identity, but a worryingly fragmented one.

Moreover, for a child of eight to refer to herself as a ‘demi-girl’, ‘part-girl’ or ‘they/them’ is not spontaneous. It is a sign of adult influence, which belies the claim that gender-neutral parenting allows the child to discover his or her identity for him or herself. In encouraging Hazel to identify herself as such, she is pitched into battle against the conventions and norms of the social world. She is effectively alienated, not just from social existence, but also from her own body. That’s because the world will continue to relate to, and recognise, her bodily existence, as a non-plural gendered pronoun, in spite of her parents’ demands. She will find herself in an impossibly anti-social state of alienation, opposed to the very way in which others think of her.

Moreover, by being identified with a newly invented category, she is deprived of any sense of belonging to something other than herself, be it to the human race, or to the girls and women who have gone before her. A tribe of one is surely a lonely place to be.

But this is the point to the whole project of gender-neutrality. It isolates individuals from social conventions and frameworks of shared meaning. It is not a fight to expand the possibilities for either side of the gender binary. It wants to destroy distinctions altogether, by attacking our common language and ‘problematising’ the gendered distinctions through which we enter the world as actual people. This is a slash and burn approach to human culture. It is the exact opposite of the proper task of raising children, which involves teaching children the words and meanings they will share with their fellow humans.

Ironically, the gender-neutralisers do not actually want to do away with gender. While they see gender as an imposition harmful to individual self-expression, they also see ‘gender identity’ as somehow essential, arising inexplicably from within the individual. At a certain age, they believe the child will have their ‘gender identity’ revealed to them by their own self. In the meantime, adults must create a neutral ground on which to allow this authentic self-revelation to take place. ‘Gender identity’ is therefore both all-important, but utterly meaningless. How could it have meaning if it emanates entirely from within an individual, like a gas escaping from the earth? It really is the most irresponsible way of thinking about a developing child, and one that is even more mystifyingly essentialist than sex or gender.

In her statement, ‘sometimes I wish I could become a normal girl, but that’s not who I am’, Hazel reveals the extent to which she accepts her estrangement from ‘normal’. This is highly unusual for a child, most of whom wish, above all else, to fit in with their peers.

But then gender-neutrality actively encourages a profound rejection of everything that is seen as normal. As writer Josie Appleton notes:

‘Gender-neutral persons have no point of independence, no point apart from the world on which to stand. They are their identity box; they are their pronoun. And the content of this identity box is nothing but the violation of the commonly accepted category. It is an identity founded on the negation of the categories of social life, declaring them “binary” and null and void.’

In other words, were Hazel simply to be a girl, she could fit in among her peers, who would just accept her as ‘Hazel, the girl who doesn’t really like pink’. Unfortunately for children like Hazel, adults have weaponised them, sending them out into the world fighting battles from the word go, not against gender stereotypes but against the very concepts, categories and solidarities by which we live our lives. This is deeply damaging, not just to social solidarity, but also to children themselves.

Jan will be speaking on Wednesday 20th November, in Dublin, as part of the Battle of Ideas Europe event, Nature, Nurture, Neither or Both? What Neuroscience Can and Cannot Tell Us.