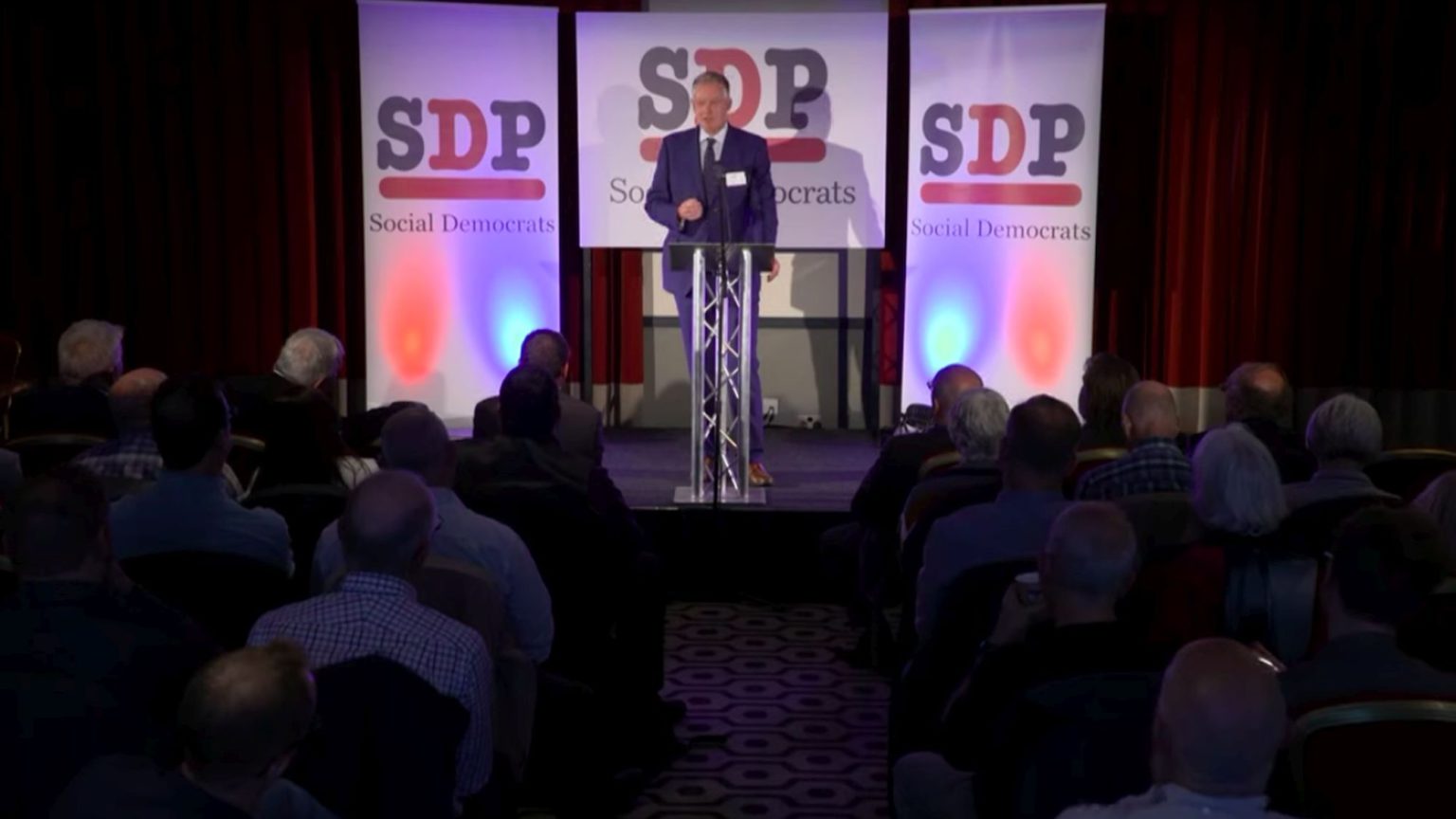 The SDP: a social vision for post-Brexit Britain

The reborn Social Democrats want to put social solidarity back on the agenda of British politics.

At the time of writing, Brexit looks as uncertain as ever, with its delivery depending on the results of an extremely unpredictable General Election. If, however, some form of Brexit is to be our future, the reborn Brexiteers of the all-new Social Democratic Party (SDP) could yet make a vital political contribution.

Most readers will remember the SDP as the party formed in 1981 by former Labour MPs Roy Jenkins, David Owen, Bill Rodgers and Shirley Williams – dubbed the Gang of Four. That version of the SDP made a splash for a while, before dissolving itself in a merger with the Liberal Party, to become the Liberal Democrats in 1988. Owen continued with what was left of the SDP, but, in May 1990, his recusant rump received fewer votes in the Bootle by-election than the Monster Raving Loony Party. Owen then sought to decommission the SDP.

However, a legion of the SDP rearguard persisted in local strongholds, such as East Yorkshire, South Wales and Glasgow. And in the past two years something extraordinary has happened. This shell of a former major third-way party has revived, promulgating a politics a very long way away from soggy liberalism.

I spoke to Richard Plackett, the SDP’s London and South East regional organiser. He tells of how the SDP’s membership has expanded over the past 12 months, from the low hundreds to thousands. He talks also of the enthusiastic party meetings up and down the country, and the galvanising effect of celebrity journalists Rod Liddle and Giles Fraser publicly signing up. Plackett attributes this in no small part to the resonance of last November’s New Declaration – a successor to the original Limehouse Declaration, which announced the Gang of Four’s departure from the Labour Party in 1981.

Success is slow. Apart from the splashes of Liddle and Fraser joining, then UKIP MEP for the East of England Patrick O’Flynn defected to the SDP a year ago. But he declined to stand again in the Europearn Parliament elections at the end of May, on the grounds the UK should already have left the EU. It leaves the SDP currently boasting just one district councillor in Nottinghamshire, and a smattering of community councillors elsewhere.

Recent by-election bids in Peterborough and Newport have proven disappointing. SDP leader William Clouston, himself a community councillor in Corbridge in Northumberland, sees the SDP project as one which will take at least 10 years to bear fruit. It is a project of radical centrism, he tells me, which does not ‘split the difference’ between its left and right components. The ‘blue bits are pretty blue and the red bits certainly red’.

Speaking to a packed branch meeting in his local pub in Canterbury earlier this year, Liddle characterised the mission of the party as ‘re-establishing the unifying power of the nation state’. For Clouston, re-establishing the unifying power of the nation state requires major constitutional change. ‘One of the consequences of the political crisis we are in now’, he tells me, ‘is that first-past-the-post and the House of Lords and the Westminster system will not prevail’. Clouston believes there is an unsettled English question whose solution is the abolition of the House of Lords, the establishment of an English parliament in the North of England with equivalent powers to the Scottish Parliament, and a federal parliament at Westminster to legislate for defence and foreign affairs only.

If all this can come in the train of Brexit, then and only then will the aspiration of the majority of ordinary people for, as Clouston puts it, a ‘social future rather than a gated future’ be achievable.

He is a keen follower of the Eurosceptic Portuguese hard left. It brought home to him the pre-political nature of decision making in the EU – ‘the system of having all the important policy levers at the Commission level or at least at the Council of Ministers level – interest rates, monetary policy, immigration and trade policy’. This, Clouston argues, makes meaningful democracy, where such issues are up for discussion and voted on in elections, simply impossible.

For Patrick O’Flynn, the now ex-MEP and current SDP Brexit spokesman, re-establishing the unifying power of the nation state means revisiting the long-betrayed promises of post-1945 social democracy, and the original ideals of the welfare state. Having what he tells me is ‘a kind of working class-influenced sensibility’, he sees a political system which lets down those engaged ‘in clean living in difficult circumstances’. ‘Instead’, he continues, ‘it focuses predominantly on people, who maybe through no fault of their own, are behaving badly and being a problem to society’. The same system also overlooks people who ‘started with very little and want to do the right thing’. The idea of ‘clean living in difficult circumstances’ appears to be his own personal political credo, a saying he attributes to the manager of The Who. In fact, he confesses he is a bit of ‘an old Mod’ at heart.

The problem for O’Flynn is that middle-class progressives in education, housing and many other areas of state social-policy delivery, have lost sight of ‘the importance of demonstrable virtue and constructed a system which undermines the impetus for people from non-privileged backgrounds to get on’. Thus, in education, the idea that it is progressive to restrict the ability of state schools to expel disruptive pupils ‘triggers me’. He notes dryly that private schools suffer from no such compunction. As regards housing, ‘I would have been supportive of people like Bob Crow, and his notorious 100 grand a year, who nevertheless lived on a council estate. It helps everyone if there are successful, hard-working people on the estate.’ Tories, like Grant Shapps, who sought to bring in a policy whereby such people would have to forfeit their council tenancy, O’Flynn likens to ‘well-intentioned, but clueless Edwardian missionaries’.

His attitude to criminal justice can be best summed up by his pointing to Michael Howard, famed for his bang-’em-up prison policy, as his favourite Tory leader of recent years: ‘I guesstimate there are hundreds of people living in this country today who wouldn’t be alive if he had not doubled the prison population.’

O’Flynn thus appears particularly articulate on the ‘blue’ bits of what Clouston calls the SDP’s ‘red and blue centrism’. Those ‘blue bits’ are in fact the glue of the ‘social solidarity’, which Clouston spoke about recently in his address to the party’s annual conference, and which Brendan O’Neill, in a speech at the same conference, identified as the vital corrective to the social-atomisation project of the liberal elites and their allies in the woke, intersectional left. Clouston sees the concentric circles of family, community and nation as the three places in which social solidarity grows. The ‘red bits’ are about making those three places work by ‘building stable communities, with policies enabling people to live and work in the place they are from’.

Are there echoes of Blue Labour, a movement that shadow home secretary Diane Abbot has criticised for ‘wrapping itself in a “Hovis commercial” nostalgia’? Clouston doesn’t think so. He tells me there is ‘no going back to the 1950s’, when it comes to gay rights, women’s rights and racial equality. These gains are, rightly, ‘in the bag’. But he does want to roll back the ‘constant overreach’ of left liberalism and the market, which focus almost entirely on ‘individual desire’. ‘[We] have forgotten about us, about common purpose and our responsibilities to other people’, he says.

What motivates Clouston above all is that ‘we [the SDP] are the only people doing this’. To advance what he calls the SDP’s ‘distinctive blue and red communitarian politics’, the party is going to field between 15 and 20 candidates in the General Election, which will be the biggest slate of SDP candidates since 1987. Motivated by the strategic desire not to harm the Brexit cause, they are only going to target ‘Labour heartland seats with very big majorities’, such as Jarrow, Leeds Central, Tottenham and Cynon Valley in Wales, Ann Clwyd’s seat. They will be offering ‘traditional patriotic Labour voters the sort of programme they would recognise from Peter Shore’s days’. The SDP’s aspiration in this election is to show that they represent the ‘five million people on the left who voted Leave’.

For Clouston, there is no contradiction between this aspiration and his belief that the ‘safest outcome of the election for Brexit and the country is a Conservative majority’. A Corbyn-led government would be ‘disastrous’, he says.

He also criticises the Brexit Party, which he tells me ‘should have taken the win’ of Johnson’s deal. This is interesting, because until recently the SDP, like the Brexit Party, supported a no-deal, WTO-terms Brexit. Clouston stresses that that was only in the context of the May-Barnier deal. With Johnson’s deal, he tells me, he believes that Britain can get a Canada-style free-trade agreement, and so become a ‘normal, independent Anglo country’.

If Boris’s deal does indeed give Britain its freedom, then surely that freedom will only mean something if what Clouston calls ‘the voice of the hinterland’ can make itself heard. And if the SDP is right, the social solidarity Britain is crying out for, will owe as much to Thatcherite aspirationalism as it will to the collective traditions of the left. Or as O’Flynn’s favourite band The Jam put it: ‘These are the real creatures that time has forgot…’

Watch Brendan O’Neill’s speech to the SDP conference below: