The Syrian debacle is not only Trump’s fault

America’s 2011 decision to back Turkey and its Syrian proxies laid the ground for today's conflict. 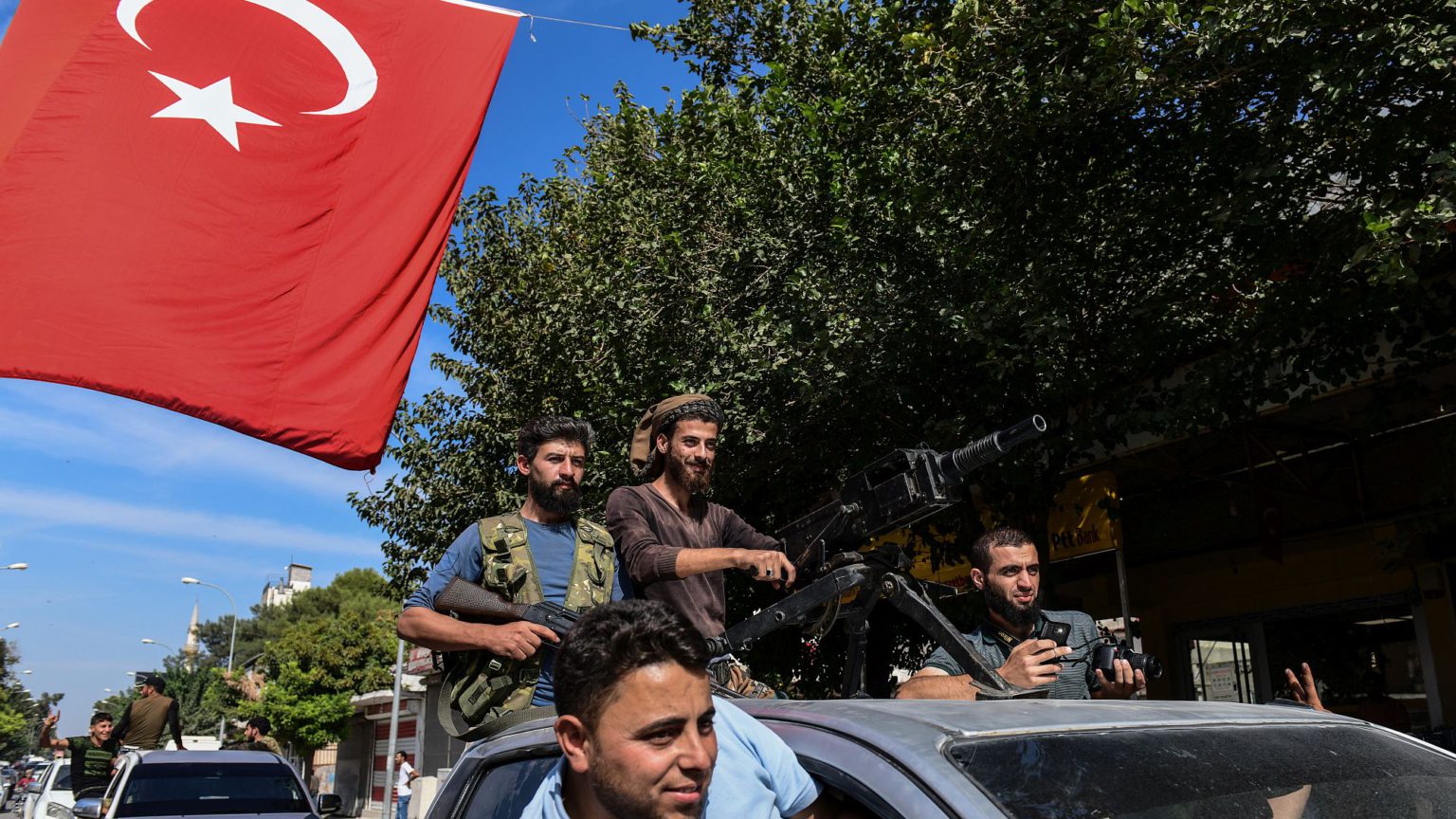 The folly of President Trump’s decision to withdraw US troops from northern Syria did not lie in the withdrawal itself – after all, little positive has come from continued American interference in the Middle East. No, the folly lay in withdrawing on terms set by the Turkish state. It lay in Trump’s impulsive acquiescence to President Erdogan’s long-standing demand that US forces move out of the Turkish military’s way. It lay in intervening, through withdrawal, on Turkey’s behalf, against the Kurds.

The consequences of Trump’s folly have been dire. Turkish military forces, fronted by the hardline Islamist remnants of the Free Syrian Army, have moved quickly, cutting a ruthless swathe through territory in northern Syria held by the Kurd-led Syrian Democratic Forces. It is estimated that between 160,000 and 300,000 people have so far been displaced, and many killed and injured. Despite the partial ceasefire, or ‘pause’, as Erdogan called it, the Turkish state remains undeterred in his efforts to repopulate the area with some of the 3.6million Syrians Turkey is currently holding for the EU.

Having been abandoned by the US, Syria’s Kurds, represented by the Democratic Union Party (PYD) and its de facto army, the People’s Protection Units (YPG), have been forced to seek an alliance with Bashar al Assad’s Syrian regime. There is little love lost between them, given that Assad, like his father, has treated the Kurds as second-class citizens, depriving them of fundamental rights. But the Kurds are desperate, hence the willingness to renounce any stab for autonomy in return for the protection of the Syrian army.

Brokering the alliance between Assad and the Kurds is the major beneficiary of Trump’s impetuousness: namely, Russia. So just as Assad’s regime looks to Russia for political and military support, now the Kurds do so, too. The Russian state’s role is not straightforward, of course. Erdogan has forged a relationship with President Putin, with the Turkish state now purchasing weapons from Russia as well as the US. Nevertheless, it is an indication of just how internationalised the Syrian conflict is, with or without American involvement, that its immediate future is being decided not in Damascus or the towns and cities of northern Syria, but at the Black Sea resort of Sochi where the leaders of Turkey and Russia have been meeting this week.

Not that anyone should expect peacemaking miracles from Moscow. It backs Assad’s insistence that Syria retain its territorial integrity, which goes against Turkey’s effective plan to shift its Syrian border 30 kilometres south. And it does not want a revived ISIS revitalising Russia’s own restive Islamists, something threatened by the breakdown of the Kurdish order, not to mention the collapse of the ISIS-packed prisons, in northern Syria. The presence of Russian forces in the key border towns of Manbij and Kobani, both of which lie within Turkey’s designated ‘safe zone’, shows how Turkey and Russia’s semi-amity could easily turn into antagonism.

So it is a dangerous, volatile situation. The YPG, betrayed and fearful, are in retreat. Syrian government and Russian forces are empowered. The Turkish state and its proxies are emboldened. And the jihadist threat is resurgent. The consequences of Trump’s folly are now all too palpable.

Many in the US foreign-policymaking establishment recognise this. They have seized upon Trump’s folly to impeach him in the court of public opinion. Former defence secretary James Mattis, was joined last week by General William McRaven, a former special forces commander, Admiral James Stavridis, a former NATO chief, and others in slating Trump’s decision as a ‘geopolitical mistake of near epic proportions’. Mitch McConnell, the Senate Republican leader, penned an op-ed slamming it as a ‘strategic nightmare’. And former US secretary of state Hillary Clinton called it ‘a sickening betrayal both of the Kurds and his oath of office’.

Yet the blanket condemnation, echoed around the Western world by pundits and politicians, sticks in the craw. Trump’s decision was many things. Crass. Capricious. Not to mention politically and morally wrong. But it was also a decision born of an almost impossible situation, one in which the interests of two US allies – Turkey and the Kurds – are in flagrant conflict. A conflict for which the conditions, moreover, were created precisely by the US foreign-policy establishment, and the assorted cheerleaders for Western intervention, now using Syria to condemn him.

For it was they who enthusiastically intervened in the aftermath of the Arab Spring in Syria. It was they who set the US and the West against Assad. And it was they who worked alongside the Turkish state to confect a rebel alliance of ‘moderates’, with the so-called Free Syrian Army at the front, to wage war against Syrian government forces.

And this is the tragedy of what we are seeing right now in northern Syria. Those largely Islamist militias in the employ of the Turkish state, now gleefully hacking their way across northern Syria, are the remnants of that intitial US-Turkey-led intervention. They were sponsored, backed and even trained by the US in the years between 2011 and 2014.

Here’s Clinton speaking in 2014 to the Atlantic: ‘The hard men with the guns are going to be the more likely actors in any political transition than those on the outside just talking. And therefore we needed to figure out how we could support them on the ground, better equip them.’ As Max Blumenthal, of the Gray Zone, notes: ‘One of those “hard men” is Salim Idriss… de facto leader of the mercenary forces dispatched by Turkey into northern Syria. He has pledged, “We will fight against all terror organisations led by the PYD/PKK.”’

It was only after 2014, when those nice, moderate Free Syrian Army rebels the US and Turkey had so proudly cultivated, revealed themselves to be violent jihadists, some even joining with insurgent ISIS and al-Qaeda affiliates, that the US was forced to perform a volte face. For it was then, with ISIS occupying vast swathes of Iraq and Syria, that the US turned away from Turkey, and towards Turkey’s avowed enemy, the Syrian Kurds. So having encouraged and backed Turkey in its anti-Assad manoeuvres, through the Syrian rebel militias, the US began fighting it, through the Kurds, in its own anti-ISIS manoeuvres. As one headline at the time put it, ‘America is in a proxy war with itself in Syria’.

In other words, those now condemning Trump set in motion the very conflict now tearing northern Syria apart. They initially enjoyed the feelgood moral sentiments arising from posturing against Assad, and went along with the Turkish state, funding and arming its Islamist proxies in the FSA. And then, when the folly of that intervention became apparent, they pushed and backed the Kurds, against Turkey’s proxies and their ISIS brethren.

Trump, then, confronted an insoluble contradiction created by the US’s long chaotic foreign policy, one in which the product of the first phase of its intervention in Syria ran up against the product of its second phase. That’s not to excuse Trump’s wretched decision to side with Turkey and betray the Kurds. It is to point out the fact that Trump’s preening, self-righteous critics, from Clinton to the laptop militarists in the UK, exacerbated in Syria the very conflict between Turkey and the Kurds of which Trump has now so callously tried to wash his hands. His, one might say, are far from the most dirty.