Eco-alarmists are feeding kids a daily diet of fear and doom. 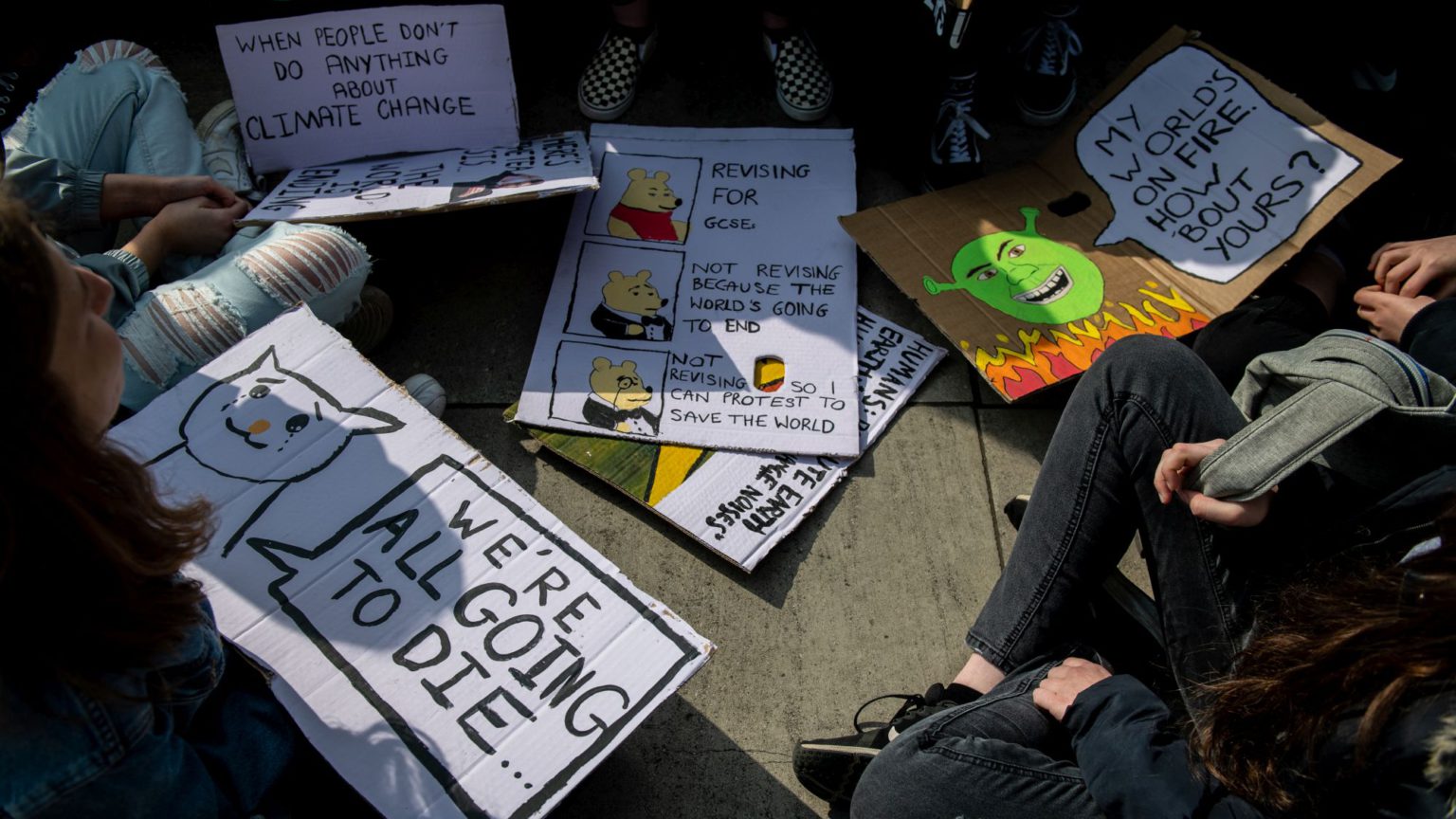 ‘Eco-anxiety’ has become the latest fashionable malaise. Apparently it is afflicting many children. That kids as young as four and five are feeling anxious about the climate is not surprising – after all, they are fed a diet of doomsday scenarios by the new eco-alarmists. Having effectively been given permission to feel hyper-anxious about the coming Armageddon, many youngsters have wholeheartedly embraced the role of the stressed-out victim of humanity’s eco-crimes.

As usual, the media and popular culture have been at the forefront of cultivating this narrative about eco-anxious children. In a new HBO series, Euphoria, an over-the-top anxious teenager embraces what we might call the eco-doom excuse. She says there is little point in kicking her drug habit because ‘the world’s coming to an end and I haven’t even graduated high school yet’.

Another HBO series, Big Little Lies, features a scene in which the daughter of one of the main characters has a panic attack in class after being relentlessly subjected to climate scare stories. There is a wonderful moment in which the teacher asks the eight-year-olds, ‘How many gallons of water does it take to make a single pound of sausage?’. As if participating in some kind of secular ritual, the chorus of children reply in unison: ‘A thousand!’

It is difficult to avoid the conclusion that it has become a sign of virtue for both children and adults to make a display of the disturbing symptoms of eco-anxiety. Such symptoms show that we are aware and concerned. In turn, the idea that climate-change concern is causing mental suffering adds up to further proof of the damage caused by climate change. In recent months there have been many reports about the mental-health consequences of climate change. For climate alarmists, the discovery of this alleged new malaise of eco-anxiety is a bonus. Linking climate catastrophism to the deterioration in children’s mental health allows them to boost the eco-fear narrative. It is a good example of the concept of joined-up scaremongering.

Joined-up scaremongering usually involves taking a pre-existing danger and adding the idea that it poses a unique threat to children. Why? Because if you mention the word ‘child’, people will listen. You can raise the moral stakes by claiming a child is at risk. People won’t just listen to you – they will endorse your demand that ‘something must be done’.

For instance, campaigners against poverty know that they are far more likely to gain sympathy for their cause if they draw attention to what is now called ‘child poverty’. It is as if socio-economic injustices are not compelling enough on their own terms – no, they have to be recast as things that harm children in particular.

Or take campaigners on Third World issues. They know that mentioning ‘child labour’ or ‘child soldiers’ or ‘starving children’ is far more likely to resonate with the public than general calls for economic assistance. As an acquaintance of mine who works in the charity sector put it to me: ‘Mention the word children, and the money rolls in.’

Children, therefore, become a kind of moral resource that can be used to promote policies and causes. Which is why, time and again, discussions about supposed catastrophic threats like climate change tend to focus on ‘our children’s future’.

It is bad enough that society has become so devoted to scaring children about the future survival of the planet. What is even more corrosive is the medicalisation of children’s concern about the future, the transformation of it into a mental-health problem. The number of children supposedly suffering from a climate-change-related mental-health problem is growing all the time, we’re told. Although reports on eco-anxiety rarely specify the percentage of children suffering from it, we are assured that the number is rising.

Claims of an epidemic of eco-anxiety are typically vague. ‘No stats are available on the prevalence of eco-anxiety, but some experts have noted an increase in public anxiety around climate change’, writes one journalist. One ‘expert’, Susan Clayton, who co-authored a report titled Mental Health and Our Changing Climate: Impacts, Implications, and Guidance, speculates: ‘We can say that a significant proportion of people are experiencing stress and worry about the potential impacts of climate change, and that the level of worry is almost certainly increasing.’ What is really increasing is the determination by experts and activists to construct this new mental disease of ‘eco-anxiety’.
Indeed eco-anxiety sounds suspiciously like any other form of anxiety. According to one description: ‘Symptoms of eco-anxiety include anxiety, depressed mood, insomnia, and feelings of loss, fear and helplessness. Symptoms in children may also include separation anxiety and somatisation – signs suggestive of physical illness but without a physical explanation. For example, stomach aches, headaches and extreme fatigue.’ Given that most of these symptoms are already associated with a variety of other mental-health conditions, it seems likely that normal anxiety is being rebranded as a psycho-eco-illness with the simple addition of the prefix ‘eco’.

Commentators acknowledge that eco-anxiety is more of a metaphor than a scientifically informed diagnosis. They usually say that it isn’t yet ‘an official diagnosis’ and then imply that it’s only a matter of time before it will be included in the American Psychiatric Association’s Diagnostic and Statistical Manual of Mental Disorders. As one observer says, ‘Although not yet listed in the mental-health manual… a number of professional organisations such as the UK Council for Psychotherapy, the American Psychological Association and the Wellcome Trust have written about it’.

Apparently, it is not enough to scare children about their future and then medicalise their fears – scaremongers are now targeting parents, too. ‘Rising numbers of children are being treated for “eco-anxiety”, experts have said, as they warn parents against “terrifying” their youngsters with talk of climate catastrophe’, says the Daily Telegraph. Yet the project of terrifying children about the climate is actively promoted at all levels of society. Pinning the blame for ‘eco-anxiety’ on parents is a little dishonest.