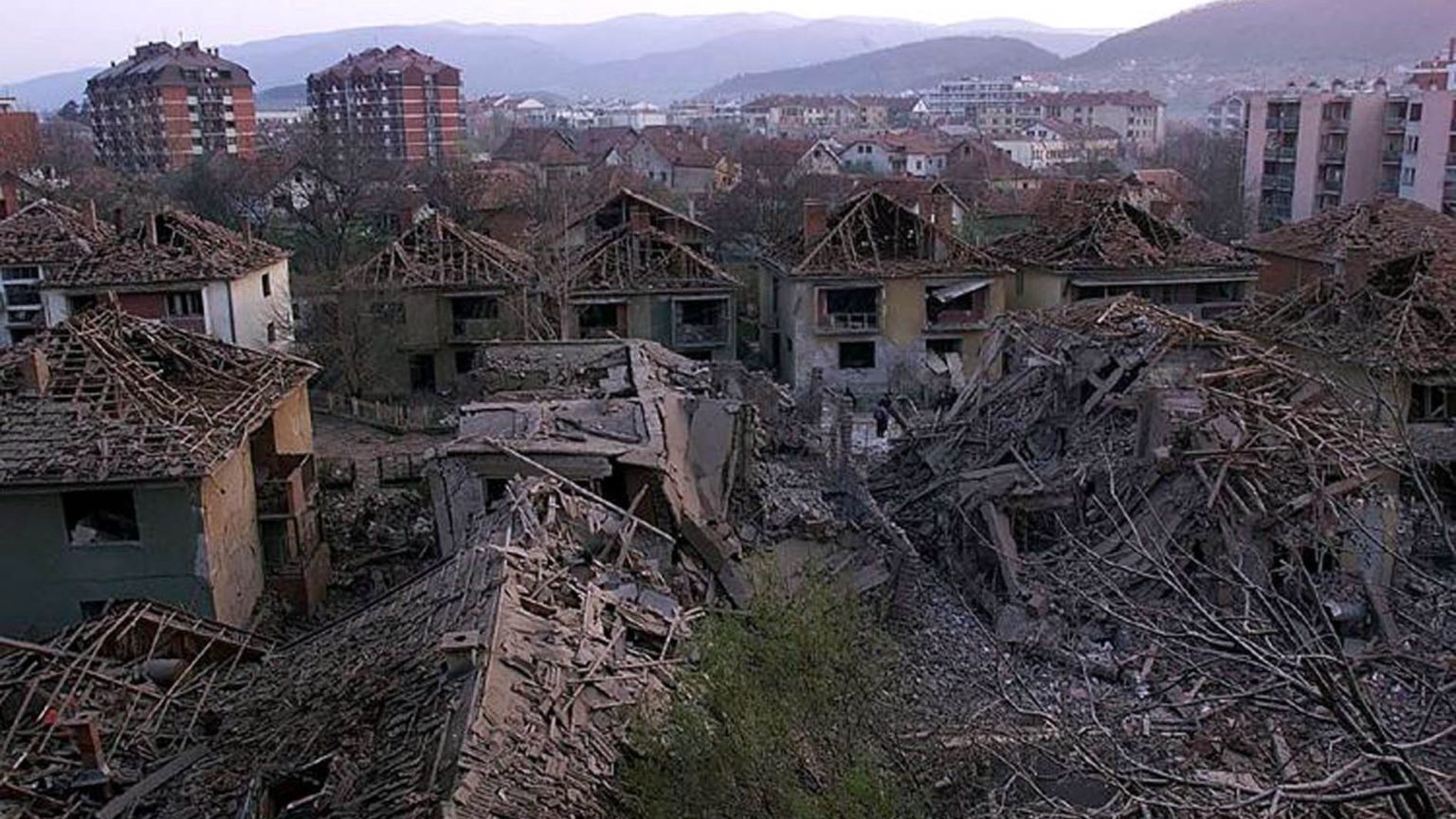 The tragedy of Kosovo

Twenty years on, NATO’s Kosovo campaign is a testament to the horrors of ‘humanitarian intervention’.

Twenty years ago this week, NATO launched its first major military campaign. The US, Britain and other NATO powers pounded Serbia for 78 days. This was not a purely military operation: NATO also destroyed what it called ‘dual-use’ targets, such as factories, city bridges, and even the main television building in downtown Belgrade, in an attempt to terrorise the country into surrender.

The Kosovo War was the final chapter in the break-up of what was then Yugoslavia. The province’s ethnic-Albanian majority faced rising repression throughout the 1990s, while most of Yugoslavia’s constituent republics broke away — through protracted bloody conflicts in the cases of Croatia and Bosnia. Although the official policy of Kosovo-Albanian leaders was non-violence, the growing influence of the armed separatists of the Kosovo Liberation Army (KLA) led to increasing attacks on the central state authorities and on Kosovo’s Serbian minority.

As they had done in Croatia and Bosnia, Western governments threw fuel on the flames by supporting the separatists, while portraying themselves as peacemakers. NATO leaders were fully aware that, as the UK’s then defence secretary George Robertson admitted on the day the bombing began, until early 1999 ‘the KLA were responsible for more deaths in Kosovo than the Yugoslav authorities had been’. As NATO also knew, the KLA strategy was to escalate conflict, precisely in order to precipitate Western action. One Kosovo-Albanian leader told the BBC afterwards: ‘The more civilians were killed, the chances of international intervention became bigger, and the KLA of course realised that.’

So it was that the world’s most powerful military alliance could present its assault on a small European country as a ‘humanitarian’ operation. Initially, the idea was that bombing would prevent a refugee crisis. As then prime minister Tony Blair put it at the time: ‘Fail to act now, and [we]… would have to deal with the consequences of spiralling conflict and hundreds of thousands of refugees.’ Predictably, the effect was the opposite: the bombing itself led to exactly these consequences as conflict within Kosovo intensified.

NATO’s response was to ratchet up the propaganda, denouncing the Serbs as ‘Nazis’ committing ‘genocide’ in Kosovo. NATO leaders were helped by sycophantic media coverage, since most journalists were already fully on-board with the idea that the West was a force for ‘good’ against ‘evil’ in the post-Cold War world. It is a story we have heard many times since: NATO’s Kosovo campaign was held up as a supposedly successful model by those arguing for military action against Iraq in 2003, Libya in 2011, and Syria in 2018.

But this idea is well past its sell-by date. The argument for ‘humanitarian military intervention’ is always that the ends justify the means: that the risk of death and destruction in the short term will be vindicated by the ultimate goal. At the end of the Kosovo conflict, Blair pledged that the international community would ‘build a Kosovo which, in the end, will be a symbol of how the Balkans should be’. Twenty years on, they have had ample time to make good on that promise.

How the Balkans should be?

The distance between rhetoric and reality gapes widest in relation to the claim that, as Kosovo’s EU-approved constitution proclaims repeatedly, it is ‘a multi-ethnic society’. This, after all, is supposedly what the war was all about: Blair claimed at the time that ‘it was fought for [the] fundamental principle… that every human being, regardless of race, religion or birth, has the inalienable right to live free from persecution’.

As he spoke, tens of thousands of Kosovo Serbs were fleeing the pogroms that immediately followed the war. Many thousands more have left in the years since, because NATO intervention did not resolve the underlying conflict. Serbia still claims jurisdiction over the province, but constant low-level violence, intimidation and harassment continue to make normal life impossible for Kosovo’s Serbs and other minorities. Eruptions of serious violence occurred in 2004, 2008, 2009 and 2011.

Post-war Kosovo is not a peaceful place, and – despite being the only place in the world where you can meet someone named Tonibler walking down Bill Clinton Boulevard – in recent years it has exported more militant jihadis per capita than anywhere else in Europe. According to a 2017 report by the UN Development Programme, over 300 young men from Kosovo went to join Islamic State in Syria, some climbing ‘to the top of the ISIS hierarchy’, while others have ‘carried out attacks on Western Europe and in the USA’.

Some commentators have blamed the influence of the Saudi-funded Islamic charities who set up in Kosovo after the war, possibly unaware that the KLA used to be an importer of jihadis. As the British author Mark Curtis has pointed out, Western intelligence agencies knew about the KLA’s active collaboration with al-Qaeda before the war. The response of NATO governments at the time was to supply arms and training.

Many analysts point to stalled economic development as a key ‘push factor’ driving a rise in extremism, and indeed Kosovo has the lowest per-capita GDP in the region. Unemployment is at over 30 per cent (around four times the European average and worse than Greece at the height of its recent economic crisis), rising to over 55 per cent for youth unemployment. Yet many more people have left Kosovo in search of jobs than have travelled abroad in pursuit of martyrdom. Rather than straightforward economic immiseration, probably the more significant factor is a wider sense of disenchantment with the reality of ‘independent’ Kosovo.

The ‘failed state’ built by the West

Kosovo today is the product of years of intensive international intervention. It was ruled directly by the United Nations Interim Administration Mission in Kosovo (UNMIK) from the end of the war in June 1999. In 2008, Kosovo declared itself an independent state – but this was ‘supervised independence’ under the auspices of the European Union Rule of Law Mission in Kosovo (EULEX). Even since formal supervision officially ended in 2012, extensive international oversight has continued: a recent study noted that the US and EU are ‘vigorously and persistently intervening in [Kosovo’s] internal affairs’. There are still around 4,000 NATO troops and over 500 EULEX staff in Kosovo, plus the office of the European Union, the 500-strong Organisation for Security and Cooperation in Europe mission, and the United Nations Kosovo Team comprising 19 agencies and hundreds of staff.

Kosovo, in other words, is a showcase for Western state-building efforts – it has received more aid per capita than anywhere else – just as the 1999 NATO intervention was itself a showcase for what Blair called the ‘doctrine of international community’. Yet the outcome, according to international relations academic Aidan Hehir, was that ‘the West built a failed state in Kosovo’. Or as another scholar, Arolda Elbasani, puts it: ‘Even when endowed with massive resources and unlimited powers, the international community has not been able to deliver on its own set of goals: a multi-ethnic, functional and democratic state.’

Instead, it has delivered a virtually mono-ethnic, dysfunctional state where minorities have either fled or live in precarious enclaves, and where voters have become disillusioned by the corruption and criminality at the highest levels of the ruling institutions.

A 2005 UN report highlighted ‘organised crime and corruption’ as the ‘biggest threats to the stability of Kosovo’, noting that ‘the government has not taken the necessary… action to fight organised crime and to prevent corruption’. Yet this was during the period of direct UNMIK rule, so if anyone was going to take action it would presumably have been the UN itself. Matters did not improve under the supervision of the EU. A 2010 Council of Europe report on ‘Inhuman treatment of people and illicit trafficking in human organs in Kosovo’ documented ‘shady, and in some cases open, connections between organised crime and politics, including representatives of the authorities’. Its findings were confirmed by another investigation in 2014.

Many of these problems are personified by former KLA leader Hashim Thaçi. Immediately after the war, the KLA became the ‘Kosovo Protection Corps’: Thaçi commanded it, as well as heading the provisional government. He led Kosovo to self-declared independence as prime minister in 2008, and since 2016 he has been Kosovo’s president. Once fêted in the West as ‘the George Washington of Kosovo’, Thaçi was identified in the 2010 Council of Europe investigation as the boss of the ‘Drenica Group’ – former KLA leaders turned ‘criminal entrepreneurs’ who have engaged in murder, kidnap and unlawful imprisonment, who exert ‘violent control over the trade in heroin’, and who have ‘designs on a form of “state capture”’.

Even sympathetic analysts have acknowledged the problem of ‘state capture’ in Kosovo, whereby ‘state resources and institutions are used for private ends’, involving ‘pervasive’ networks of corruption and patronage that hold back development. Understandably, many are frustrated with the lack of progress. Yet ultimate blame for Kosovo’s problems lies with the West.

The mayor of Priština, Shpend Ahmeti, is surely right when he argues that the local problem of ‘state capture’ is the outcome of the EU’s preference for ‘stability over democracy’. As Hehir also suggests, it is precisely because Kosovo has been a showcase for international state-building that the Western supervisors of Kosovo have been reluctant to confront its problems. Certainly in the period of direct rule, the priority was to maintain a façade of stability rather than risking the conflict that would result from tackling the sordid reality of Kosovo’s mafia-style politics. Given the lack of improvement, it seems likely that the EU’s belated ‘discovery’ of the KLA’s extremely well-known criminal connections, and their increasing preoccupation with ‘state capture’ by the very people they groomed to take charge, are just further attempts to dodge responsibility.

Ironically, one consequence of this evasive approach is that the EULEX mission – set up with the express purpose of fighting corruption and upholding the rule of law – has itself become mired in corruption scandals. In 2014, EULEX prosecutor Maria Bamieh demanded a corruption inquiry against her own colleagues, but EULEX responded by sacking her. Bamieh says she had been told by the UK Foreign Office to ignore evidence of corruption. In 2017, chief EULEX judge Malcolm Simmons resigned, alleging corruption and political interference, but then became the subject of counter-accusations of criminal conduct, and revelations that he had never been qualified to act as an international judge in the first place.

Whatever the truth of these various allegations, it seems clear that, as one former EULEX employee reportedly said of the mission, ‘there’s little demand for accountability, because there is ultimately more concern for job protection’. Others have also identified the relationship between international organisations with ‘expansive powers’ but no ‘line of authority or accountability’, and the wider ‘sense of general malaise and malfunctioning’ in Kosovo society. In Elbasani’s damning description: ‘International staff travelled around Kosovo in luxury cars, frequented upmarket cafés that catered specifically to them and lived exclusive lifestyles [which] set them a world apart from the impoverished and dysfunctional polity they helped to create.’

The people attacked by NATO in 1999 certainly won’t be celebrating this month, but it seems equally unlikely that the anniversary will generate much enthusiasm among those whom the intervention was supposedly designed to help.

Philip Hammond is professor of media and communications at London South Bank University and is co-editor, with Edward Herman, of Degraded Capability: The Media and the Kosovo Crisis.