Some in the Left Party want a progressive populism to take on right-wing populism. 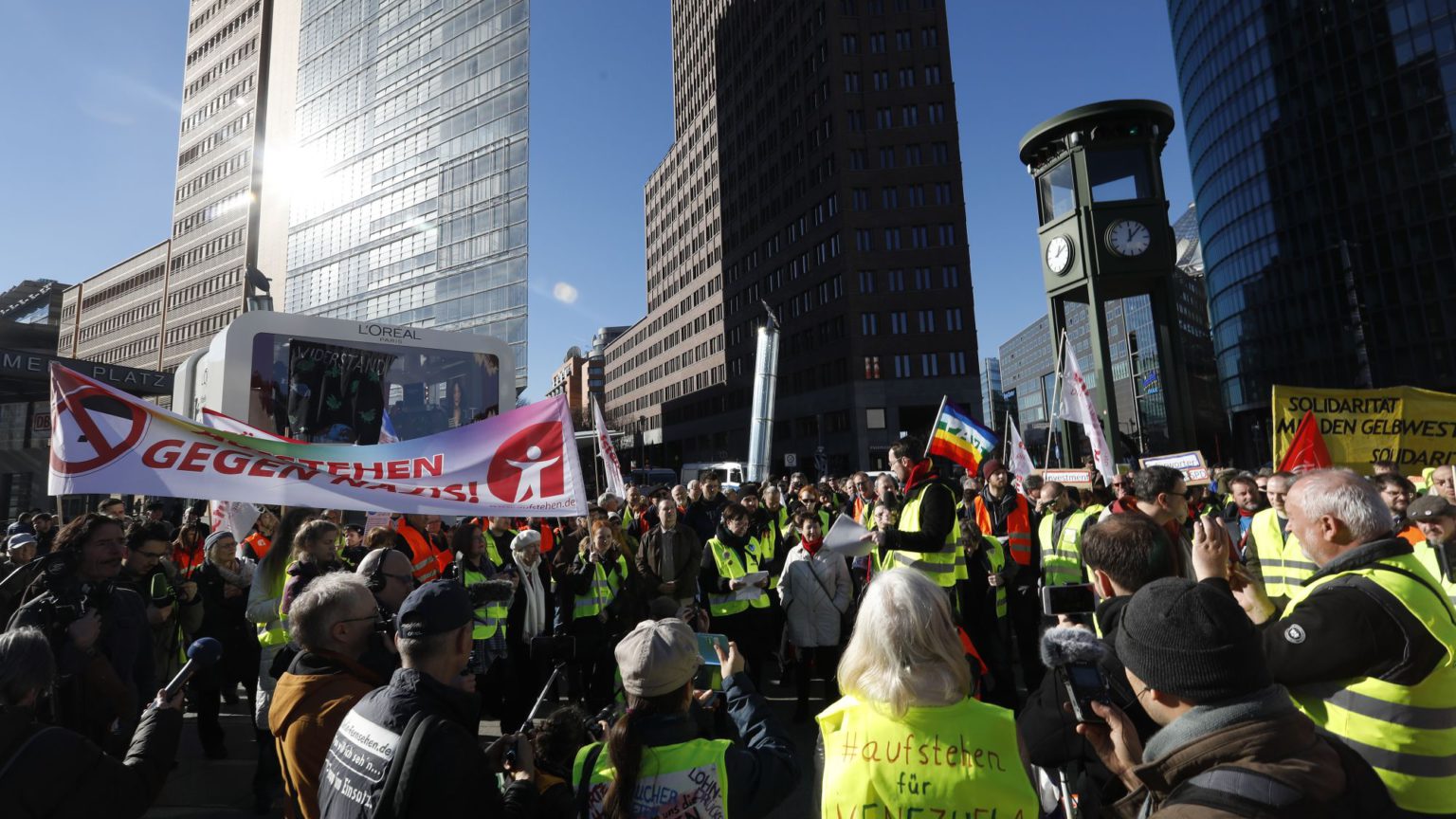 Can there be a left-wing populist movement in Germany? Sahra Wagenknecht, the charismatic parliamentary chair of the Left Party (Die Linke), argued in September that anyone who wants to see real social change in Germany needs to get people on to the streets. Inspired by France’s gilets jaunes, she was launching a new group called Aufstehen (Get Up). Wagenknecht warned that Germany would be unrecognisable in five to 10 years’ time if social protesting was left to right-wing groups such as Pegida or the Alternative für Deutschland. Within a few weeks, 170,000 people had registered on Aufstehen’s website. In December, Wagenknecht announced a ‘spring of protests’.

Three months later, the tone is more sober. The first protest drew fewer people than expected. In February, only 2,000 people gathered across 14 cities at a #colourfulvests protest with the motto: ‘We are many. We are diverse. We are fed up!’. Their demands were better working conditions, better education standards, and better care for the elderly. Now, Wagenknecht has announced that she is no longer going to lead this initiative because she wants it to be a truly grassroots movement.

So, has it flopped? ‘You can’t set the direction of a movement from above’, said Gregor Gysi, another leading figure in Die Linke. Germany is not France, he says. Gysi might be right. And this new initiative certainly has some vague slogans and ideas. But perhaps the most striking thing about Aufstehen was the hostility to it from much of Wagenknecht’s own party.

The arguments over Aufstehen are the latest example of the Left Party’s inability to forge a common line. Traditionally, the Left Party focused its energies on the same groups of disenchanted working-class voters that have more recently become the main supporters of the AfD. In the federal elections in 2017, the Left Party lost 430,000 votes to the AfD – mainly in the east. But the left also gained voters, mostly middle-class ones, from the Social Democratic Party and the Greens. The heartlands of the Left Party have slowly shifted – away from the poor rural areas in the east and towards the trendy urban boroughs of Hamburg, Berlin and the university towns. In the 2017 elections, the Left Party got 9.2 per cent of the votes – its second best election result ever.

The change in the make-up of its voting base has been paralleled by a change in political focus. It is hard to believe that this increasingly trendy party was once vilified for being too populist – in much the same way the AfD is today. ‘Unrestrainedly populist’ was the title of a 1994 article in Die Zeit about the PDS, the forerunner of the Left Party. The PDS was described as a threat to the federal republic’s ‘democratic consensus’.

Today, the Left Party has become respectable, largely by abandoning its former radical demands. It now has a clear commitment to the EU. ‘We we want European integration’, it announced in February. The party says the EU must be reformed, which is mostly just a sop to its supporters who still view the EU as a neoliberal and undemocratic institution (one party delegate, Bijan Tavassoli from Hamburg, called the EU a dictatorship).

The party has also embraced Green rhetoric. ‘Environmental pollution and climate change are threatening our living space’, its website says. Like the Green Party, large sections of the Left Party have also defended Angela Merkel’s refugee policy. In 2016, Wagenknecht was criticised by her own party for saying that the integration of refugees would pose serious difficulties. She also claimed that Merkel had enabled Islamic terrorism by opening up the borders. Soon there was talk of a stand-off between two factions within the Left Party: a populist one led by Wagenknecht, and a moderate one led by party leader Katja Kipping. Kipping seems to have come out as the winner, and the Left Party has increasingly styled itself as the antidote to right-wing populism.

Wagenknecht’s greatest coup with Aufstehen has been to win over dissidents from other parties. One is the former state minister Ludger Volmer, a founding member of the Greens. The Greens, he said at the Aufstehen press conference in September, have become the functional party of the middle classes whose main role, it seems, is to save Angela Merkel. The left must develop its ability to engage with ordinary people, he said: ‘We want a renewal of democracy.’ Another supporter is Simone Lange, the SPD mayor of the city of Flensburg. Lange deplores Merkel’s grand coalition of the centre-right and centre-left, particularly because it has allowed the AfD to become the only opposition in the country.

Sadly, it seems unlikely that Aufstehen will evolve into a progressive populist movement. Aside from the attacks from within the left itself, there is the problem of Aufstehen’s political message. Instead of having founding ideals, it pushes a shopping list of the old German left’s pet projects – including social justice, some criticism of American foreign policy, and environmental protection. Despite the many allusions to poverty, there is no mention of economic growth – a reflection of the German left’s longstanding and backward growth scepticism. This leaves redistribution as the only solution to social problems, which is why Wagenknecht’s position on refugees does indeed sound narrow-minded sometimes. It focuses heavily on who is more deserving of apparently limited resources – poor Germans or immigrants.

Still, at least Wagenknecht and her co-founders have understood that populism is here to stay. And that their own left-liberal parties’ opportunistic abandonment of discontented voters will have serious consequences. They are right to demand a new progressive populism, even if they have struggled to make it work so far.