Spare me this pagan revival

Pagans are generally perverts, and not even sexy ones. 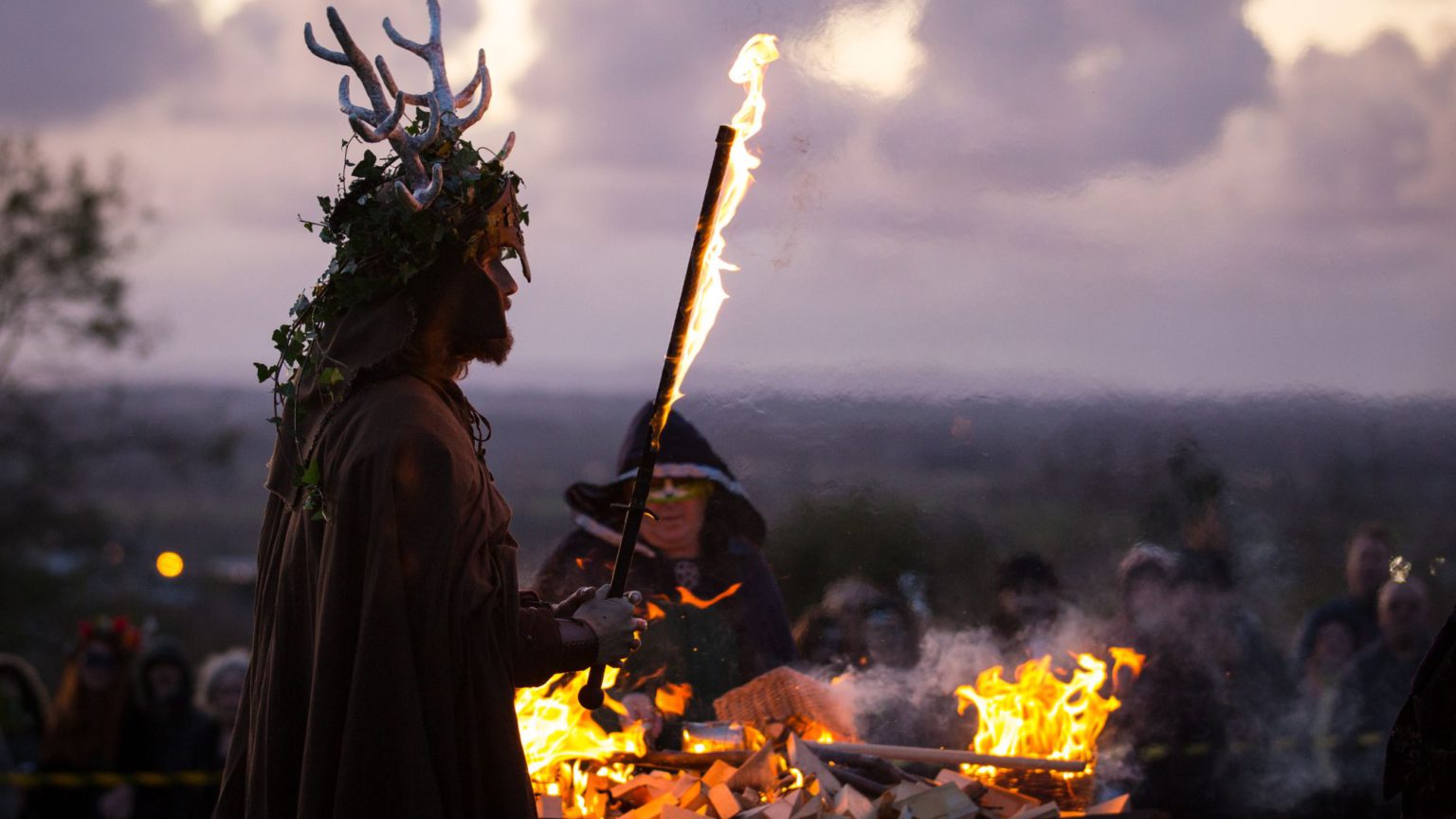 It’s been quite a year for pagans. In spring they demanded their own prison chaplains, by summer they were calling for their own Radio 4 ‘Thought for the Day’ slot, and now, in time for the Winter Solstice of 21 December, pagans within the British Armed Forces will now have their own official support group (the Defence Pagan Network), meeting for the first time next month. All in all, the Old Religion is having a bit of a moment.

These days the occult has to some extent taken the place of sex for the notoriously chaste Generation Z. Pinterest reports a rise in witchcraft pins of more than 280 per cent, the #witchesofinstagram have a following to rival Little Mix, and the young ‘witchfluencer’ Harmony Nice of Norwich has a YouTube following of nearly half a million, as well as a book deal. For a cohort keen on passing off narcissism as rebellion, the dark side ticks all the little black boxes. But they’ve always been with us. For most of the year you can forget about them, but every winter they show up, dissing Christianity and capitalism in one fell swoop, and pining for the pagan celebrations that went on before either.

Frankly, such people are generally perverts, and not even sexy ones. They are the sort of people who had my mum hiding the News Of The World from my prying pubescent eyes every Sunday rather than let me read about suburban Satan-worshippers whose interest in black magic basically began and ended with inducing housewives to strip off and dance around some scrubland. They’re bolstered these days by the aforementioned monstrous regiment of snowflakes who get offended by being called ‘darlin’’ by a bus driver but, incredibly, imagine that pagan times were in some way kinder (there are even vegan pagan recipe sites, if you please). Whereas in truth the nasty nature-bothering bullies were up for any cruelty going: hunting wrens, whipping chickens and of course shutting poor old Callan up in a human-shaped cage and making him do Guy duties.

This deluded element of paganism overlaps quite sizeably with alleged feminists who believe that paganism gives much-needed airtime to the Mother Goddess, unlike all those bad patriarchal religions. As the Pagan Federation puts it:

‘Women’s spirituality is one of the richest and most dynamic forces in modern paganism. Women are respected in all pagan traditions and have enriched paganism with a powerful vision of the goddess – the long-ignored feminine aspect of the divine. In paganism, women are priestesses in their own right, strong and proud, with their own vision. As well as working in the various traditions of paganism, women have established their own traditions. These traditions have many forms and are often deeply entwined with the aspirations of the women’s movement.’

Hmm, that would be the womb-worshipping wing of the women’s movement, the one which believes that menstruation, procreation and menopause are squad goals to be fetishised rather than the career, cocktails and contraception corps of modernists like me. A good part of being a feminist is about showing Mother Nature – that red-in-tooth-and-claw bitch – who’s boss. Why on Earth would any broad worth her salt roll over?

When people claim to be pagans, it always strikes me that however cheery and life-affirming they are attempting to portray themselves as, they are actually quite probably rotters who suffer from chronic lack of empathy and imagination. It’s like those clowns who are keen on finding out about their alleged former lives – always Cleopatra or Julius Caesar, never some poor slave or gladiator. (Conversely, as the writer Bobby Pegg remarks, ‘But when people claim to have seen a ghost it’s always a humble stable boy or a scullery maid or a Roman centurion – it’s like people are worried they won’t be believed if they say they saw Henry VIII or Barry Chuckle’.) Does it not occur to them that on the law of averages they would have been humble human sacrifice rather than prancing sexed-up overlord? No, of course not, because pagan-posing is a form of ninnyish narcissism, seen so clearly in the crystals, runes and tarot cards they go in for – horoscopes for Whole Foods whores.

Saying that the main world religions have nothing to offer you is extraordinarily bumptious when you think of the colossal political leaders inspired by the great faiths. (I wonder how the black American civil-rights movement – surely the most aesthetically pleasing and morally unimpeachable crusade imaginable – would have looked had the Reverend Martin Luther King been inspired by paganism rather than Christianity?)

The so-called tolerance of paganism – which is often willy-waved with all the nuanced subtlety of a dirty-minded child tracing the Cerne Abbas Giant – was always a red herring anyway, as anyone with the slightest knowledge of the Roman Empire will know. (Torturing Christians to death and then accusing them of seeking martyrdom – you’d have to give the Romans marks for chutzpah if they hadn’t been so keen on crucifying Jews, too.)

Between paganism and Christianity there is no contest. Ask a Christian to make a sacrifice and they’ll immediately give money to a good cause or volunteer for a charity; ask the same thing of a pagan and they’ll grab the nearest knife and furry friend. And just compare the Christian and pagan influence on culture, from music to architecture: Christianity’s got the St Matthew Passion and St Paul’s Cathedral – pagans have got Genesis P-Orridge and Stonehenge.

Indeed, in my opinion the greatest pagan-inspired art is ‘Stonehenge’ by Spinal Tap – ‘Stonehenge! Where the demons dwell / Where the banshees live and they do live well / Stonehenge! Where a man’s a man / And the children dance to the Pipes of Pan…’. For fun-poking at pagans in literature – paganism leads itself so easily to parody because it’s so profoundly silly – we need look no further than the appalling Mr Mybug in Stella Gibbons’ 1932 novel Cold Comfort Farm, who spoils Flora Poste’s walks in the Sussex countryside when he is reminded by buds of ‘nipples and virgins’ and by distant hills of ‘a pair of large breasts’.

Back to sex again! Just as orgiasts often turn out to be boring little men who stand semi-tumescent on stairways droning on about slip-roads, there’s something particularly comic about claiming to be a pagan in a country where the main topic of conversation is the climate. Go on, pagans, have a good old bout of nature-worship – but I hope you never complain about the weather. And I hope you’re fine with natural disasters too, while we’re at it. Don’t send any money to the victims of that earthquake – let’s celebrate good old Mother Nature always knowing best.

Though it is singularly silly to say that everyone you disagree with is Hitler, let’s not forget that the actual Nazis were actual pagans. And nobody wants the Nazis rocking around the Christmas tree, spoiling things. So please, pagans, keep your bloodthirsty, sex-starved meanderings to yourselves this Yuletide. No one says you have to indulge in either the Christian or commercial hijinks which make this such a special time of year. But maybe you should wait until the sukebind hangs heavy from the wains and you can spy on innocent mating beasts and get your twisted kicks that way, rather than by attempting to rain on the Christmas parade of your fellow humans? So ‘merry meet again’ – or not, if I see you first.