And the rock Remainers claim Leave voters are the mad ones. 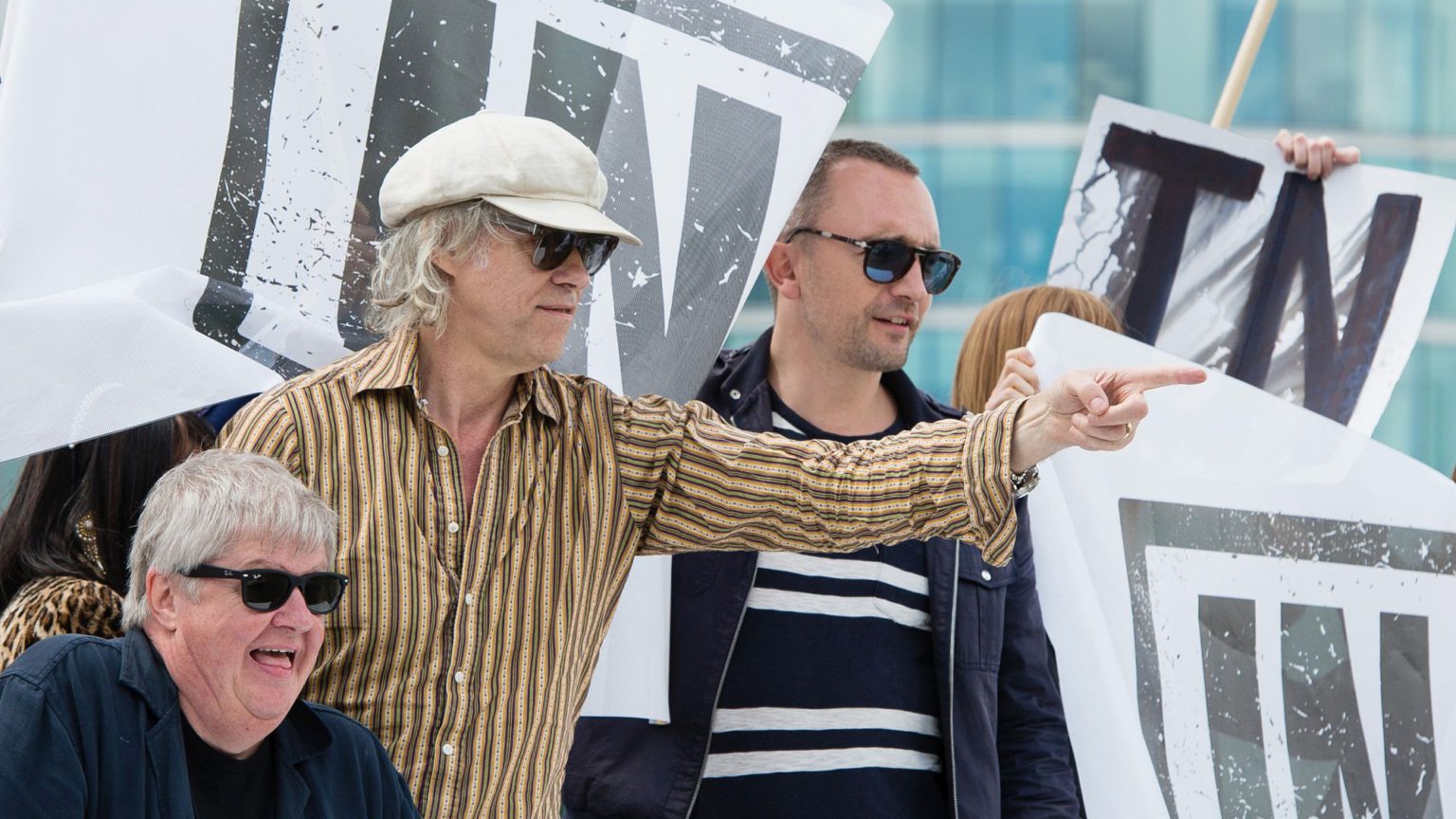 Brexit is ‘serious madness’ that will sound the death knell for the UK’s booming music industry, Sir Bob Geldof and dozens of pop celebrities warn in an open letter to prime minister Theresa May.

Once upon a time we were led to believe, in the words of British band Argent’s 1973 anthem, that ‘God Gave Rock’n’Roll to You’. Now Geldof and Co would have us believe that, actually, God gave rock’n’roll to the EU, and He will take it away again if we dare to leave. And they reckon Leavers are the mad ones…

Sir Bob’s rant, published in the Observer and shared across the Remainstream media, proclaims music as the ‘one area Britain still rules the waves’. But now it warns, ‘Brexit threatens, as it does so much else, this vast voice’. The ‘serious madness’ of leaving the European Union will apparently sentence the UK music industry to silence in a ‘self-built cultural jail’.

Blimey. We have become used to Remainiacs boring on about how Brexit will destroy everything from women’s to workers’ rights, as if the British people had never fought for or won these liberties before they were somehow handed down to us by benevolent Eurocrats. Now they tell us that Brexit will also switch off Brits’ right to rock the world.

The implication is that the UK could never have a successful music industry outside of the EU. It’s perhaps a good job that nobody mentioned this to the likes of The Beatles, the Rolling Stones, the Kinks, the Who, Led Zeppelin, Pink Floyd, David Bowie and all the other British artists who, if memory serves, seemed to do all right before the British people ever voted to be part of what was then the European Economic Community in the 1975 referendum.

Not to mention those who somehow struggled to the top in the later Seventies and Eighties – from the Sex Pistols to Wham!, the Smiths to the Jam, and the likes of the Stones and Bowie again – before the European Union even came into existence in 1993.

Indeed, it might seem easier to argue that, with rare exceptions — early Oasis, Amy Winehouse — British pop music has never really been the same since we did sign up to the EU. But maybe that’s just my age talking.

The list of signatories certainly doesn’t read like an advert for the energy and creativity of Remainer rock’n’roll. Geldof says that everybody he sent it to – revealingly, under the subject heading ‘Towards a Second Vote’ – agreed to sign. Hardly surprising that a list which the Guardian describes as ‘a roll-call of Britain’s rock and classical establishment’ should have backed the political establishment’s campaign to overturn the democratic vote for Brexit.

Signatories who caught the headline writers’ attention include such musical dullards and semi-derelicts as Rita Ora, Brian Eno, Neil Tennant, Roger Taylor, the conductor Simon Rattle, and bloody Sting. One stand-out signatory was Ed Sheeran, flagged up as ‘the world’s best-selling pop star’. In which case, pop music must surely have become as staid and conformist as the politics behind Remain.

The reported appearance of Paul Simon among the signatories caused some initial kerfuffle, since the singer-songwriter’s British credentials appeared even thinner than Geldof’s. Closer inspection revealed the real name on the letter to be Paul Simonon. That seemed even worse, since Simonon was once Joe Strummer’s sneering bassist in the Clash (he was the nearest thing early punk had to a teen pin-up), before becoming an artist and joining the cultural elite’s Remainer choir. What was that Clash line from ‘Complete Control’ (co-written by Simonon 40-odd years ago)? ‘They’re all fat and old / Queuing for the House of Lords…’

The spectral spirit of punk seems rather better represented by Johnny ‘Rotten’ Lydon. He might be getting fat and old like the rest of us but, having initially backed Remain from his Los Angeles home, Lydon came out for Brexit on a post-referendum visit to his native London, because: ‘The working class has spoke, and I am with them.’

Meanwhile, Brexit has caused a similar split in the Smiths, with guitarist Johnny Marr consolidating his place in the Guardian’s heart by signing Geldof’s letter while Morrissey is treated as a pop pariah for daring to call the Leave vote ‘magnificent’.

Inevitably the open letter tries to depict the top popsters as victims of Brexit, whining that it will hamper them making more money through everything from ‘touring, sales, copyright legislation, to royalty collation’. They must be working in a different Europe to the industry body PRS for Music, which recently confirmed that ‘we’re not expecting any significant disruption in the flow of performing rights and royalties as a result of Brexit, deal or no deal’, since these things are ‘governed by voluntary agreements between collecting societies’ that have ‘no direct relationship to the UK’s membership of the EU or any trade deals’. But why let a bit of fake news get in the way of some heartfelt Brexit-bashing?

In his bizarre conclusion, Geldof calls on the Tory government to reject Brexit – as backed by the largest popular vote in UK political history – because that’s apparently not what we Brits do: ‘When Europe is in a mess, the Brits get stuck in.’ So instead of leaving the anti-democratic EU, we must fight to make it ‘a different one. An exciting one. A rock’n’roll one.’

A rock’n’roll EU! The closest they are likely to get to that is Jean-Claude Juncker’s May-mocking shimmy on to a Brussels stage the other day. The 1957 Treaty of Rome might have been signed in the same year as Elvis recorded ‘All Shook Up’ and Jerry Lee Lewis had a ‘Whole Lotta Shakin’ Goin’ On’, but there any similarity ends. The prospect of the bureaucratic, life-sapping EU becoming more rock’n’roll is about as likely as Robert Geldof, Knight of the British Empire, becoming a rebel against the Euro-establishment rather than its frontman.

The open letter ends with the cry ‘Let’s save our voice’. Translation: let’s silence the voices of the 17.4million who voted to Leave. There has always been an elitist streak in music, despite its ‘popular’ pretensions. The multi-millionaire Geldof nailed his colours to the mast in the referendum campaign, sailing a boat full of professional Remainers up the Thames to tell a flotilla of Leave-backing British fishermen to fuck off. In the words of Pulp’s Jarvis Cocker (one of the more disappointing signatories), you’ll never do what ‘common people’ do.

It might be tempting to echo rock guru Noel Gallagher who, while no Brexiteer, has told Remainers to ‘fuckin’ get over it’. But no, let Geldof and Co keep ranting away, converting about as many people as he sells records these days. Nothing they do or say can alter the reality that the democratic Brexit revolt is the most rock’n’roll, punk thing to happen to UK politics in a lifetime. As letter signatory and choral music composer Howard Goodall told the Observer in horror, ‘Everything is going to change’. We live in hope.

Mick Hume is spiked’s editor-at-large. Mick is speaking on the panel ‘How free is the media?‘ at the Battle of Ideas in London on Sunday 14th October. Book your tickets here.