Into The valley of the fallen 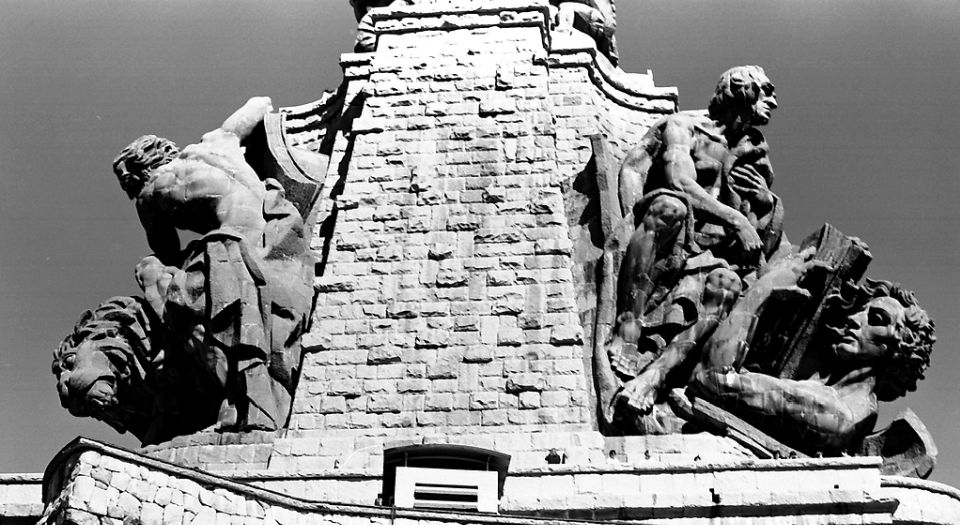 On 24 August this year, the Socialist government of Spain legislated to exhume General Franco from his tomb at Valle de los Caídos, near Madrid. The Valle de los Caídos basilica was built by Franco as a symbol of both reconciliation and conquest and it became his tomb in 1975. His remains are now being exhumed and relocated, ostensibly to prevent Franco supporters gathering, as they have done over the years, to pay respects to Spain’s former dictator. In truth, the move to relocate Franco’s remains is not about paramilitary displays causing disorder or resurgent militaristic Catholicism, neither of which have been a threat since the failed coup of 1981; it is a chance for the Socialists to posture against the hated fascist dictator, albeit posthumously enacted. This move is part of the recent trend to erase symbolic history in the US, Austria and Ukraine and South Africa.

Publication of a new translation of Carlos Rojas’s seminal 1978 novel El Valle de los Caídos – The Valley of the Fallen – could not be timelier. Written in the aftermath of Franco’s death, the novel blends the turbulent and sometimes barbarous history of Spain in a meditation on parallels between two eras: the last years of the Bourbon monarchy, and the twilight of the Francoist era. We encounter Goya, court painter, talking to the king, Fernando VII. Rojas recounts stories from the Napoleonic wars of Iberia and the thoughts of the elderly Goya. The other thread of the novel is the domestic life of Sandro, a biographer of Goya living through the final days of Franco. Struggling with his literary task and coping with a troubled romantic relationship, Sandro considers the legacy of Franco and the civil war that brought him to power.

Early in the story, Goya goes to the Príncipe Pío Hill in Madrid, where Spanish prisoners were executed by Napoleon’s troops, to record the bodies of the fallen. Goya’s records would be used for the creation of The Third of May, 1808, Goya’s famous painting of civilians executed by soldiers; an image used by both revolutionaries and pacifists as an icon of defiance against tyranny. The executions were a reprisal for the savage attacks on Napoleon’s troops by Madrileños, and it is by no means clear that the dead were all innocent of the acts for which they were summarily dispatched. Goya’s Romantic and patriotic clarion cry of freedom obscures a brutal and morally ambiguous episode. Moreover, the anti-clerical Goya had hitherto been in favour of the Napoleonic usurpation of the Bourbons. He had viewed French influence as potentially reformist and enlightened for backward Spain. The Third of May, 1808 could be seen, then, as Goya attempting to clear his name of treachery by asserting his patriotism.

Goya recorded the war memorably in prints of The Disasters of War. He was well aware of the barbarity which demeaned both sides in the conflict. ‘[In one print] soldiers of Legion de Réserve hack at guerrillas with their bayonets’, Rojas writes. ‘In the next print, it is the guerrillas who cut up the French with axes and pikes. This etching has a two-word caption written in Goya’s somewhat trembling hand: “Lo mismo,” The Same Thing.’ The war exposed in unarguable clarity the innate savagery of all men, no matter which flag they lived under and fought for. Part of the late Black Painting series, the Battle with Cudgels, which depicts two peasants beating each other with clubs while buried up to their knees, is seen as an allegory of unrelenting, mindless fratricide by enemies who are immobilised, rooted in the land they share.

Rojas discusses the atrocities committed on both sides, far beyond the exigencies of combat. Brutality breeds itself. He has the aged and deaf Goya talking about seeing a massacre in the centre of Madrid. ‘The Egyptian cavalry charged, shooting their guns and wielding their swords, into a crowd armed with shouts and razors… I couldn’t hear the shouts, the shots, the neighing, and the artillery fire that filled Madrid that day. In that sinister quiet, which seemed to split my skull, the battle in the street took on a distant, unreal air.’ Little wonder that in his last decades, Goya was weighed down by personal losses and the tragedy of his ravaged homeland.

The intrigues of the court in Goya’s era echo those that beset the Franco regime. Behind the scenes, factions were manoeuvring to enforce and subvert Franco’s expressed legacy, just as they had done in the gargantuan chambers of the royal palace El Escorial in 1808. In the novel, we see Spaniards glued to televisions and radios, awaiting the news of Franco’s death. The event for them is both historically momentous and personally inconsequential.

The death of matador Pepe-Hillo in the bullring in 1801, before Goya’s eyes, is compared to the very public death of Franco. The minutest of medical details relating to Franco’s various conditions and treatments were relayed by state broadcasters. Surgeons performed numerous invasive procedures to keep the 82-year-old alive a few extra days in what seemed a grotesque pantomime. Likewise, the lingering deaths and myriad maladies of inbred Habsburg and Bourbon royalty were documented in detail by courtiers. ‘Death made into a spectacle is still at the centre of the Iberian arena’, concludes Sandro.

Although this is a novel of ideas (rather than characters), it is full of attractive prose and arresting imagery. A mixture of story, biography, art criticism and history, The Valley of the Fallen is a complex but not obscure novel, rich in incident and insight.

As for Franco, he should not be exhumed. To do so would not be a moral correction but an act of pettiness presented as virtue. The tomb is damaged and in a state of decline. Franco should remain in the monument as it crumbles. Allowing Franco’s grandiose mausoleum to turn to ruins is a fitting end for the Caudillo.

The Valley of the Fallen, by Carlos Rojas, is published by Yale University Press. (Buy this book from Amazon(UK).)

Picture by: Greg Younger, published under a creative commons license.