Serena, that cartoon and the truth about bigotry

The defenders of Serena Williams have been far more bigoted than her critics. 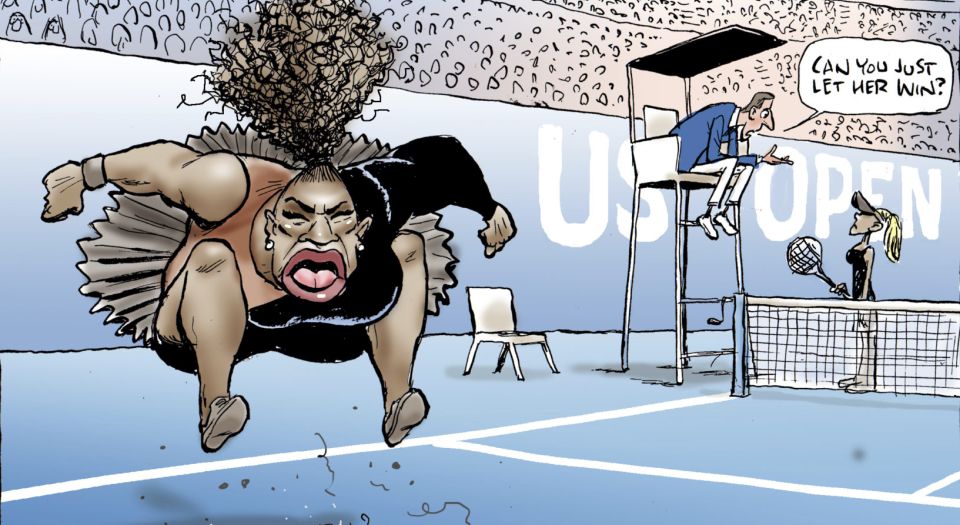 Very often today bigotry comes in the guise of anti-bigotry. In their rage against the bigotry of the millions of voters who were allegedly hoodwinked by demagogues into voting for Brexit, Remainers reveal their own bigoted attitude towards what they clearly view as a dim electorate. In their efforts to shout down the ‘bigots’ who criticise their ideology, trans activists expose their own bigoted intolerance of dissenting opinion. (Bigotry, after all, literally means ‘intolerance to those who hold different opinions from oneself’.) And in their promiscuous branding as bigots any Christian or older person who thinks marriage should be between a man and a woman, supposedly sophisticated urban elites provide a glimpse into their own bigoted disdain for traditionalist sections of society.

And so it has been with the controversy over that Australian cartoon of Serena Williams flipping out at the US Open. I hope it isn’t racist to accuse Serena of flipping out. It probably is. Judging from the commentary of the past week, any criticism of this great sportsperson is racist, and probably misogynistic too. So no sooner had Mark Knight’s Herald Sun cartoon showing Serena jumping on her racket rolled off the printing presses than he and the whole of Australia were being labelled ‘bigoted’. There it was again: the expression of bigotry – in this case against the sun-burned, convict-descended ignoramuses of Australia – under the cover of anti-bigotry.

Serena’s legion defenders, including the entire ‘social justice’ machine, which has bizarrely turned her into a Christ-like figure suffering the slings and arrows of the ignorant public’s backward attitudes, spoke a great deal about the ‘racist tropes’ in Knight’s cartoon. But the only caricaturing tropes on display in this controversy concerned Australia and its inhabitants. This cartoon exposes ‘Australia’s ignorance on race’, judged one commentator. This country clearly lacks ‘racial literacy’, she said. The cartoon spoke not only to one man’s alleged bigotry, but to a sickness across all of ‘white Australia’. A writer for CNN said the cartoon shows Australia is a ‘racist country’. White Australians suffer from ‘blindness to privilege’, apparently, ‘without realising [that they are] doing so’. Forgive them, they know not what they do, these infants of the global order. The cartoon springs from ‘Australia’s ugliness’, said one editor.

The irony here is striking: the very people who rushed to accuse Knight of caricaturing black people thought nothing of caricaturing an entire nation and its people (its white people, at least). Knight merely accentuated the characteristics of one woman, and, as he and his newspaper illustrated in depth, he always accentuates people’s characteristics. It was his critics who engaged in national and racial caricaturing. They extrapolated from his cartoon in order to brand an entire nation as a hotbed of ignorance, and one particular group of people – white Australians – as racially illiterate. It is a stretch to see bigotry in Knight’s cartoon, but much of the reaction to it unquestionably smacks of anti-Australian bigotry.

Hating or mocking Australians is all the rage in certain circles in the Anglosphere. Especially in Britain, where looking down on Down Under has been acceptable and even fashionable for a great many years. Very often, the things that Britain’s cosmopolitan pseudo-liberals feel they can no longer say about the less well-educated sections of their own society – that they are vulgar and ignorant – they say about Australians instead. In these PC times, when you can’t just go about calling working-class Britons savages, sneering at Australia sometimes becomes a substitute for that old elitist disgust for the lower orders. Anti-Australian bigotry is the methadone to yesteryear’s smack of insulting Britain’s own proletariat.

It helps, of course, that some Australians are descended from British convicts: our worst people cast out to procreate in a strange land, as many elitists in the UK have seen it. These days, Australia is typically fretted over for its ‘crimes’ against correct-think as defined by the new cultural elites. It is slammed for its lingering masculinity; its climate of anti-political correctness; its stubborn and huge coal industry when the rest of us are going renewable; its whiteness. ‘The ugly face of Oz’, was the title of an essay in the Guardian a few years back. It charged Aussies with being sexist and racist. Australian men are the ‘most unreconstructed’ in the world apparently. There is also a cult of ‘extreme anti-science’ and a disease of ‘unwitting racism’ Down Under, British observers inform us. You’re stupid and prejudiced – that’s always the message.

In some ways this anti-Australian bigotry echoes the outlook of older Western elites who viewed that faraway land as teeming with vulgar men and Ned Kelly-type psychopaths – hence the continued critique of Australian masculinity. But there are new prejudices too. Australia’s greatest offence today is to dare to hold out against certain PC orthodoxies. Climate-change scepticism is strong there; many Australians are uncomfortable with speech-policing; there is a pronounced critique of mass immigration. These are thoughtcrimes in the eyes of the new elites. The speed with which Knight’s cartoon generated rebukes of all of Australia, of its ugliness and blindness, is testament to the position it already held as ‘problematic nation’ in the PC worldview.

The Serena cartoon controversy is important because it confirms that in our identitarian era, anti-racism is less about fighting for genuine autonomy and equality for all people than it is about demonstrating your own ‘racial literacy’ in contrast with those lesser people who lack such literacy. Anti-racism has become a moral pose, an expression of superiority, a means of showing that, unlike the vulgar and uneducated, you are ‘aware’. You understand the pain of black people and the privilege of your own white history. This is why criticism of the Serena cartoon so quickly morphed into expressions of bigotry against Australians and white people: because it is now largely through the issue of race, and of racial etiquette, that the new elites express their moral elevation over other people and even, in a neocolonial manner, over entire nations: racist Hungary, racist America, racist Australia. Again with the irony: it used to be racism that allowed the elites to demonstrate how much better they were than inferior peoples; now ‘anti-racism’ plays a similar role.