The rise of the Sweden Democrats is a blow to Europe’s elites. 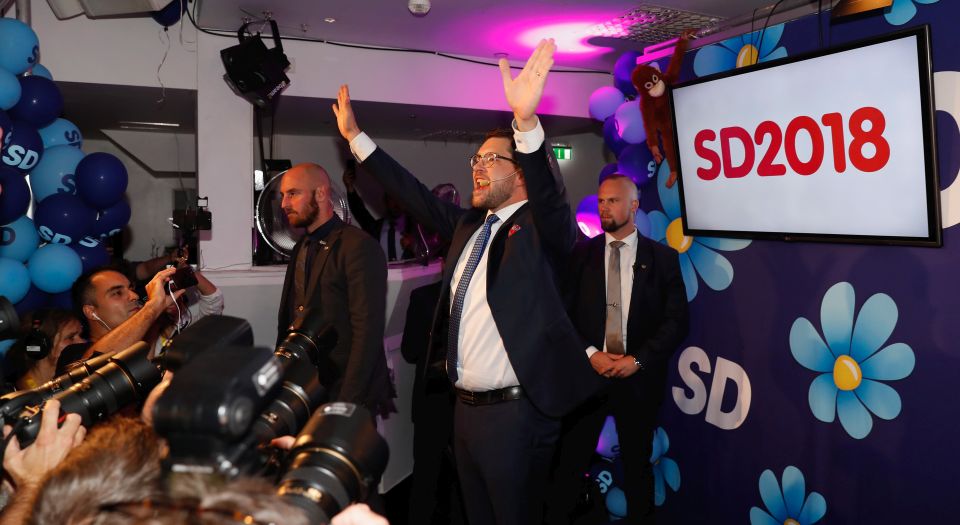 The outcome of the parliamentary elections in Sweden represents a significant setback to the Swedish political establishment. Though still the largest party, the Social Democrats suffered their worst electoral result in over a century. Sweden now faces political gridlock as neither the Social Democratic Party nor its centre-right Alliance rivals is in a position to assume power.

The biggest winner of the night was the anti-establishment, right-wing nationalist party, the Sweden Democrats, which increased its vote from 12.9 per cent in the 2014 elections to 18 per cent. More significantly, perhaps, this ‘outsider’, populist party ensured that its political agenda became the focus of debate throughout the election campaign.

Long before voters cast their ballots, the electoral campaign in Sweden had already been transformed into an anti-populist morality play. The Sweden Democrats were accused of harnessing the politics of fear to turn otherwise secondary issues – migration, integration, crime, loss of community cohesion – into the main event. This accusation quickly mutated into scaremongering about the existential threat posed by such an anti-elitist movement. It was a message reinforced by parts of the Western media, which focused almost entirely on the Sweden Democrats. What, wondered incredulous commentators, were Swedish voters thinking? How could they possibly think of voting for unambiguously pro-Swedish, anti-EU nationalists, especially at a time when the Swedish economy is doing so well.

Concerned about the rise of the Sweden Democrats, numerous EU leaders came out in support of Sweden’s Social Democrat-led ruling coalition. French President Emmanuel Macron focused his fire on Jimmie Akesson, the leader of the Sweden Democrats, telling Swedes that ‘[Akesson] is not compliant with your story and your values’. Spain’s prime minister, Pedro Sánchez, even joined his Swedish counterpart, Stefan Lofven, on the campaign trail. ‘Your economy has grown’, Sanchez told voters, ‘and your government has been on the frontline against all forms of inequality’.

As is the case with almost all elections these days, the elite-dominated media class raised concerns about fake news and Russian trolling. Sweden’s state-run SVT channel made no attempt to hide its hostility towards the Sweden Democrats, taking the unprecedented step of rebuking Akesson after a televised leaders’ debate. Akesson’s crime was to argue that the reason many immigrants cannot find a job is because ‘they are not Swedes’, and have not succeeded in fitting into Sweden. He then called for more opportunities for immigrants both to assimilate into the Swedish way of life and to integrate into the labour market.

The significance of the election

The most important feature of the election was that it exposed the fragile foundation on which the authority and legitimacy of the Swedish political establishment rests. It is important to note that the Social Democratic Party has possessed a virtual monopoly over political and institutional power since 1917. And now it finds itself wrongfooted not by a strong, long-term rival, but by the resource-poor, upstart Sweden Democrats.

The defensive and insecure campaign of the Social Democrats has important implications for the West’s other globalist political leaders. For if there is one party that embodies technocratic managerialism and cosmopolitanism it is the Swedish Social Democrats. It represents the gold standard of illiberal social engineering, otherwise known as political correctness.

In the middle of the 20th century, the Social Democrats’ grim social-engineering project was devoted to the promotion of eugenics. During a near 40-year-long programme, between 1934 and 1970, the Swedish government’s eugenics policy resulted in the sterilisation of between 60,000 and 70,000 women. All in a bid to ‘improve’ Sweden’s ethnic purity. Today the Social Democrat-led coalition has a new crusade: to re-engineer relations between the sexes and, in particular, to rid boys of their masculinity. So, during the election campaign, Gustav Fridolin, co-leader of the Green Party in coalition Social Democrats, promised that, if re-elected, he would ‘reform’ the preschool curriculum to promote gender neutrality. In particular, Fridolin pledged to stop boys behaving like boys. His distrust of boys is justified on the grounds that there is a connection between the naughty behaviour of boys in preschools and ‘men’s behaviour at their workplaces’.

The Social Democrat-led coalition government’s obsession with social-engineering projects such as gender neutrality plays well among international NGOs and cosmopolitan political circles, but less well with ordinary Swedes. The gap between this elite worldview and the cultural and national aspirations of many voters has allowed the Sweden Democrats to move in and expand their influence. As the historian Lars Tragardh explains:

‘A lot of people still think Sweden exists, that citizenship is a legitimate idea and that national community and national culture matter. Like in many Western countries, Sweden has an elite that has overinvested in globalism and underinvested in ordinary politics at the national level – the elite has forgotten that the only democracy we have takes place within the nation state.’

Arguably one of the most significant outcomes of this election is that it has opened up a debate about a hitherto taboo subject – immigration and multiculturalism.

As Jonathan Friedman, a Sweden-based American anthropologist, explains that until recently anyone who raised questions about immigration policy was shut down with the remark, ‘you are a racist’. But thanks to the growing momentum behind the Sweden Democrats’ campaign, many of the other parties have been forced to discuss and debate the immigration issue. At least for now, it will not be possible to de-legitimise attempts to challenge prevailing immigration and integration policies.

The problem of integration

Contrary to hysterical media reports, Swedish citizens, including supporters of the Sweden Democrats, are not hardline xenophobes and racists. They are principally concerned not with immigration, but with multiculturalism and its negative impact on community cohesion. Even many immigrants and their children recognise that far more needs to be done to integrate newcomers in Sweden. The policy of multiculturalism impedes such efforts. Instead, it creates a segregated society in which people lead parallel lives.

Even Ahmed Abdirahman, a Somali-born ‘integration expert’ at the Stockholm Chamber of Commerce, concedes that the Sweden Democrats’ focus on integration may create an opportunity to forge a greater sense of ‘togetherness’ in Sweden. However, those immigrants who see the downside of multiculturalism are often shunned and silenced.

Take the case of Amineh Kakabaveh, an Iranian-Kurdish ex-Peshmerga fighter who gained asylum in Sweden in the 1990s. Though she is a member of the post-communist Swedish Left Party, and a member of parliament since 2008, she is a vociferous opponent of Sweden’s integration policies. She has been especially vocal in criticising Sweden’s handling of the 400,000 asylum seekers taken in since 2012, including 160,000 in 2015 alone, the highest number in Europe per capita. She argues that the failure to integrate such a large number of immigrants has led to a rise in Islamic fundamentalism in Sweden’s suburbs. Though she dislikes the Sweden Democrats, she recognises that many see the party as ‘heroic because the others don’t rise to the challenge’. But for daring to raise questions about integration, she has been punished by the leaders of the Left Party, who refused to put her on their list of recommended candidates for this weekend’s election.

The experience of Kakabaveh shows that even a self-declared socialist cannot question Sweden’s failed immigration and integration policy without being ostracised by the political establishment.

The beneficiaries of the populist moment

As I have argued previously, the populist moment has arrived. Throughout the Western world, a growing section of the electorate is reclaiming national and popular sovereignty. They want their status as citizens to be taken seriously and not undermined by a globalist elite that regards national loyalties and attachments as a 19th-century hangover.

In Sweden, the Sweden Democrats have been the beneficiaries of the populist moment and the crisis of legitimacy of the mainstream political parties. But who are they?

Critics of the Sweden Democrats have accused them of running a negative electoral campaign. Yet it is precisely opponents of the Sweden Democrats who have proven themselves expert in negative campaigning. They continually drew the electorate’s attention to the fact that when the party was formed 30 years, some of its founders had links with neo-Nazi movements. Yes, some of its founders did have unsavoury pasts, but the Sweden Democrats’ critics ignore the party’s ‘zero-tolerance policy’ on racism and the expulsion of several members and officials for making racist comments on social media.

Moreover, the Sweden Democrats have accepted Sweden’s welfare institutions, although party leaders have remained critical of the social-engineering policies directed at citizens’ family lives. Though its politics are still unformed, many are traditionally associated with a nationalist brand of conservatism. But it is a conservatism with a distinctly 21st-century flavour. For example, the party supports gay rights and sexual freedom.

The most important contribution the Sweden Democrats have made to political life is to draw attention to the importance of encouraging all members of society to become Swedish, both culturally and linguistically. Because unless Sweden learns to integrate its immigrant population, it will face further conflict and disorder

Whether the Sweden Democrats can thrive in post-election Sweden is an open question. But whatever the party’s future prospects, it has succeeded in giving voice to the concerns of many Swedes, who, until now, were scared to question the anti-national outlook of the political establishment. That is one discussion the incoming government will not be able to close down.