Now we know: ‘the resistance’ is the establishment 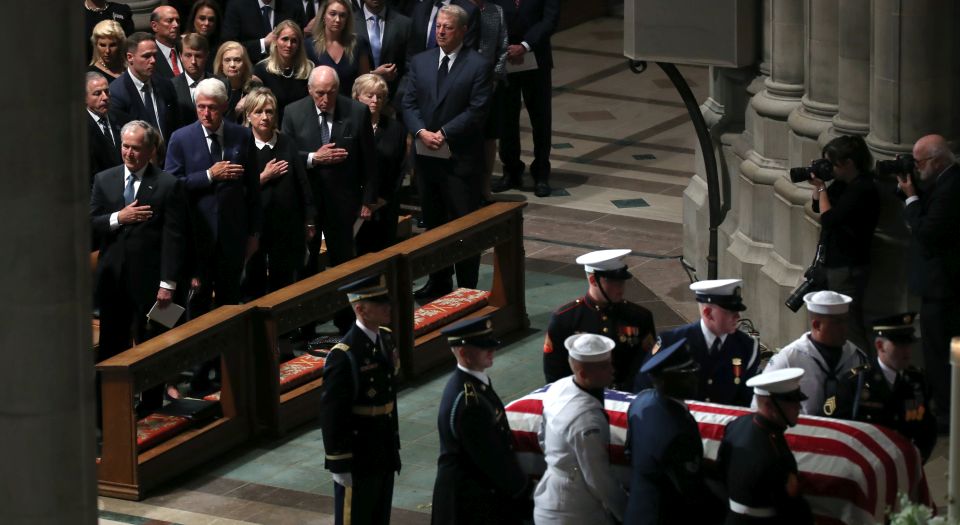 So now we know what ‘the resistance’ really is. It’s the establishment. It’s the old political order. It’s that late 20th-century political set, those out-of-touch managerial elites, who still cannot believe the electorate rejected them. That is the take-home message of the bizarre political spectacle that was the burial of John McCain, where this neocon in life has been transformed into a resistance leader in death: that while the anti-Trump movement might doll itself up as rebellious, and even borrow its name from those who resisted fascism in Europe in the mid 20th-century, in truth it is primarily about restoring the apparently cool, expert-driven rule of the old elites over what is viewed as the chaos of the populist Trump / Brexit era.

The response to McCain’s death has bordered on the surreal. The strangest aspect has been the self-conscious rebranding of McCain as a searing rebel. In death, this key establishment figure in the Republican Party, this military officer, senator, presidential candidate and enthusiastic backer of the exercise of US military power overseas, has been reimagined as a plucky battler for all that is good against a wicked, overbearing political machine. ‘John McCain’s funeral was the biggest resistance meeting yet’, said a headline in the New Yorker, alongside a photo of George W Bush, Bill Clinton, Hillary Clinton, Al Gore, and soldiers from the US Army, the most powerful military machine on Earth. This is ‘the resistance’ now: the former holders of extraordinary power, the invaders of foreign nations, the Washington establishment.

The New Yorker piece, like so much of the McCain commentary, praises to the heavens the anti-Trump theme of McCain’s funeral. McCain famously said Trump couldn’t attend his funeral. And that in itself was enough to win him the posthumous love of a liberal commentariat that now views everything through the binary moral framework of pro-Trump (evil, ill-informed, occasionally fascistic) and anti-Trump (decent, moral, on a par with the warriors against Nazism). Even better, though, was the fact that orators at the funeral, including McCain’s daughter Meghan and both Bush and Obama, used the church service to slam Trumpism, without explicitly mentioning it, and in the process to big-up what came before Trumpism, which of course was their rule, their politics, their establishment. The Washington political and media set might seem bitterly bipartisan, said the New Yorker writer, but it is also ‘more united’ in one important sense – ‘in its hatred of Donald Trump’.

Hatred of Trump has become the moral glue of the bruised elites who have been either pushed aside or at least dramatically called into question by the populist surge taking hold in the West. And so motored are these people by the shallow moralism of Anti-Trumpism that they are happy to marshal even a life as complex and interesting and flawed as McCain’s to the service of hurting Trump. A former Al Gore adviser, Carter Eskew, wrote in the Washington Post: ‘In death, John McCain is about to exact revenge on Donald Trump.’ Unwittingly revealing the Old Testament streak to the new elite religion of Hating Trump, Eskew said that as ‘McCain ascends to heaven on an updraft of praise, Trump’s political hell on Earth will burn hotter’. On why it suddenly started to rain when McCain’s coffin was brought into the Capitol, a CNN journalist said: ‘The angels were crying.’ What century is this?

The religious allusions, the talk of vengeance against Trump, the misremembering of McCain’s life so that it becomes a moral exemplar against the alleged crimes of Trumpism, exposes the infantile moralism of the so-called resistance. Albert Burneko, assessing some of the madder McCain commentary, says there is now a ‘condition’ that he calls ‘Resistance Brain’, where people display an ‘urge to grab and cling on to anything that seems, even a little bit, like it might be the thing that Finally Defeats Donald Trump’. Even if the thing they’re grabbing on to is actually a bad thing. Like a seemingly endless FBI investigation into the elected presidency. Or George W Bush, whose moral rehabilitation on the back of Anti-Trumpism has been extraordinary. Or neoconservatism: this was the scourge of liberal activists a decade ago, yet now its architects are praised because they subscribe to the religion of Anti-Trumpism. Being against Trump washes away all sins.

Some on the left have criticised the moral rehabilitation of McCain. ‘Let’s not forget that he wanted war with Iran and lots of other places too!’, they cry. Yet the truth is they paved the way for his posthumous rebranding as one of the great Americans of the late 20th century. Since 2016 they have talked about Trump as a uniquely wicked president, a shocking aberration, the closest thing to Hitler since the 1930s. Their anti-Trump hyperbole, driven by their own political disorientation and increasing sense of distance from the electorate, has allowed any politician who is not Trump to mend their reputations and gloss over their own destructive behaviour. The transformation of Trump into the bête noire of all right-minded people, a pillar of unrivalled wickedness that we all have a duty to protest against in our pussy hats and orange wigs, has been a boon to the wounded pre-Trump political class keen both to whitewash its own crimes and to prepare for its return to the position of power it enjoyed before the electorate was corrupted by ‘post-truth’ hysteria.

‘The resistance’ is the fightback of the establishment against the people. As it is in Britain, too, where the rich and influential people fuelling the war on Brexit – the largest act of democracy in British history – like to refer to themselves as ‘insurgents’. It is the height of Orwellianism for these acts of elitist reaction against democratic dissent to dress themselves up as forms of resistance. But it is not surprising. From the get-go, the so-called resistance has been more a pining for the old establishment, for Hillary’s rule and for the continued domination of Britain by the EU, than it has been any kind of daring strike for a new politics. Look closely at the funereal elitism of McCain’s burial and you will see one of the saddest and most striking political developments of our time: how self-styled radicals preferred to throw their lot in with the old establishment under the umbrella of ‘the resistance’ rather than heed ordinary people who were saying: ‘Let’s tear up the old order.’