No one voted for Spain’s new prime minister

Spain's political class needs to face the electorate, not flee it. 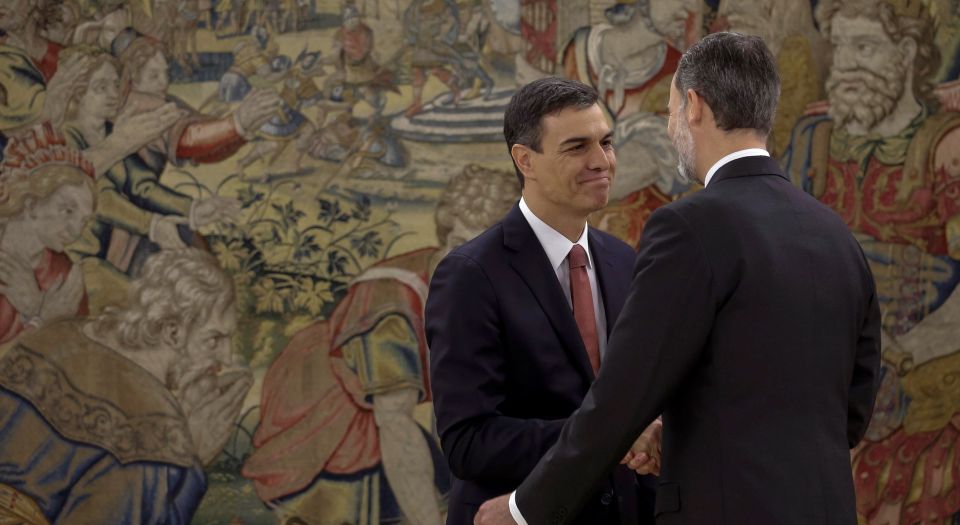 There is a big, fat, blindingly obvious problem with Spain’s new prime minister, Pedro Sánchez: no one voted for him, or indeed the Socialist Party (PSOE) of which he is leader.

In fact, 46-year-old Sánchez has never been overly familiar with the electorate. He entered congress in 2009 as an internal Socialist Party replacement because a lawmaker was leaving his seat early. He then promptly lost this seat in the 2011 General Election. Fortunately, in 2013, another Socialist congressional deputy left her seat early, meaning that Sánchez could once more return to the political fray, bypassing the electorate en route. Improbably, he was successfully nominated, thanks to the backing of PSOE grandees, as the Socialists’ general secretary in 2014, leading them to their worst-ever result in the 2015 General Elections. A few months later, the PSOE got rid of him as leader, and Sánchez, in turn, rid himself of congressional responsibilities by quitting his seat. His reason, it seems, was to have time to concentrate on becoming the PSOE leader again. Which is what happened.

His triumph this past week, therefore, was not built on anything resembling popular support. Rather, it was a feat of constitutional chutzpah. It began last week, when the corruption scandal that has long dogged Mariano Rajoy, then prime minister, and leader of the governing Popular Party, came to a momentary head (the so-called ‘Gurtel’ case is ongoing), with the jailing of one of the PP’s former treasurers for 33 years for fraud and money-laundering. The PP was itself also fined for benefitting from the kickbacks for public contracts. Sánchez saw his chance, and proposed a motion of no confidence in Rajoy, a move that under Spanish constitutional law results, if successful, in the replacement of the subject of the motion by the proposer. Congress duly passed the motion and that was that – for the first time in Spanish political history, a sitting prime minister was deposed through a vote of no confidence. Sánchez, with the Socialists in tow, had ascended to power.

But that big, fat fly in the ointment of Sánchez and the Socialists’ success won’t go away. For a start, you can see the absence of any public mandate writ large in the congressional maths. As it stands (following the 2015 General Election), Rajoy’s PP remains the largest single party, with 134 members of the 350-strong Congress of Deputies, while Sánchez and the now ruling socialists have only 84. To be able to govern without going to the electorate, Sánchez will have to strike deals with the seven other parties and regional representatives, including, of course, Catalonia’s independence-demanding cohort. Which means concessions, deals, compromises, all rich in cynicicsm and opportunism. Little wonder brand new Catalan leader Quim Torra, who has long enjoyed loathing Sánchez (and vice versa), was quick to overlook their differences and call for dialogue. ‘Pedro Sánchez’, said Torra at the weekend, ‘let’s talk, let’s address this issue, let’s take risks, you and us’. Reports suggest Sánchez is willing to do just that, despite previously backing Rajoy against the Catalan government in the brutal repression of Catalonia’s stab for independence last year.

That is the problem with Spain’s new government. It lacks real direction (hence Sánchez can countenance dialogue on Catalonian independence) because it lacks any semblance of popular legitimacy, any sense of representing something that the Spanish people want, any sense of a popular mandate. And no amount of appealing to the partial interests of the other congressional (not to mention senatorial) groupings will provide the policymaking purpose that only the electorate can provide.

It is not that Sánchez and indeed the rest of the Spanish political establishment do not realise this. They know that elections are necessary in a parliamentary democracy. They have even mooted the possibility of elections in the next year or so. But there is no real political will there, no drive to pin Sánchez down on a date. And the reason for that is simple: Spain’s political class does not want to face the electorate. The two main parties, the scandal-ridden PP and Sánchez’s PSOE, know, if the polls are accurate, that they will receive the worst results in their history. And the rest know that they, too, are no more popular than the big two. Just about the only party that is picking up any kind of momentum is a new one, the Citizens’ Party. And it is not capable of forcing an early election as it stands.

The problem that the technocratic Sánchez’s rise and coronation as Spain’s leader simultaneously embodies and covers up, certainly if some of his more enthusiastic supporters have their way, is the popular disillusionment with the Spanish political class as a whole. This disillusionment is arguably 40 years in the making, as Spain’s two main post-Franco political parties have carved up the state between them (and enjoyed the financial spoils in the process). But it is also inseparable from the Spanish political class’s commitment to the EU project, a commitment that, since the economic crisis of 2008, and the subsequent imposition by the ‘Troika’ of austerity measures, has turned into a form of masochism, for the Spanish people if not those that represent them. That’s why the PP’s use of public office for private gain sticks in the public’s craw so much now. For the kickbacks and greased palms, which might once have been tolerated, as the Financial Times suggests, in less straitened times, really grate when their beneficiaries seem perfectly happy to play along to the EU’s austere tune.

And to compound matters, there seems to be no way, certainly through the ballot box, for the Spanish people to weaken the grip of either the EU or austerity. No way to forge a different social, economic, even monetary, future for themselves. In 2015, of course, there did seem to be a populist alternative to the corrupt, politically visionless status quo in the shape of Podemos, which emerged in full academic garb, from the anti-austerity Indignados movement. Yet while it was initially rhetorically and wishfully opposed to the Troika, it soon softened its approach, preaching anti-austerity while practicing allegiance to the EU project. It became to all intents and purposes just another part of the political class, complete with a leader in Pablo Iglesias who, if his large, recently purchased, mountain-side house near Madrid is anything to go by, is more interested in personal advancement than he is in the public good. Little wonder that Podemos’ support has hemorrhaged from its highs of 2016. Even Iglesias himself recognised the problem, admitting earlier this year that ‘we need to admit that many citizens of Spain felt… we were engaging in a professional political debate’.

The Spanish public’s sense of being ineluctably put upon, of having their elected representatives happily disempower themselves in the rule-bound, technocratic machinations of the EU, is a powerful, estranging dynamic. On the one side, it drives the political class further into the arms of both the EU, and its own self-perpetuating state structures and funding arrangements; and on the other it drives the electorate further away from the institutions of representative democracy, and those parties that are meant to represent them.

So Spain is in the grip of a political crisis. It is certainly not going to be solved by the political class internally promoting one of its own. That is to continue to seek refuge from the electorate. And there is no real refuge, even in Brussels. At some point soon, Spain’s politicians need to stop fleeing the electorate, and start facing it.