Choice — the great cause of our times

The Irish revolt against the Eighth should inspire radicals everywhere. 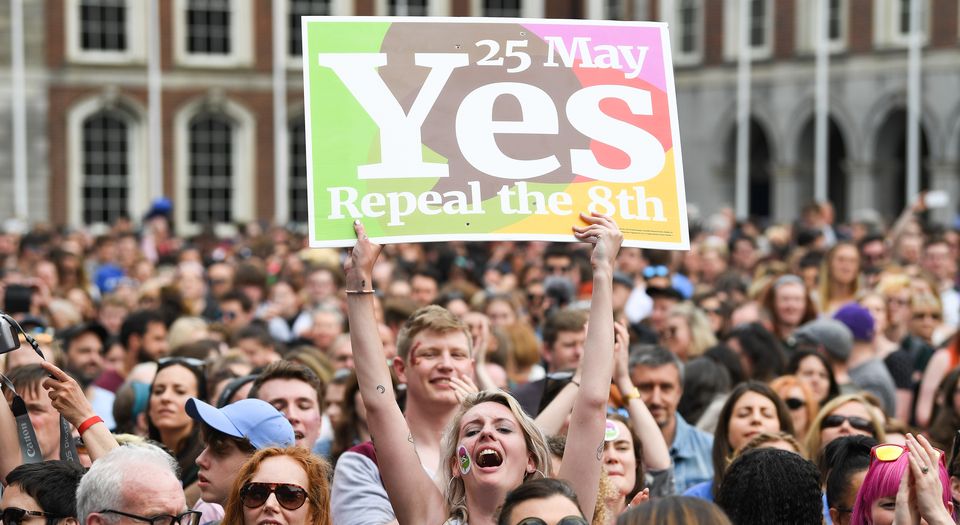 Ireland, which for the past few weeks has been in the grip of the abortion referendum, is plastered with the C-word. No, not ‘choice’, but ‘compassion’.

It’s everywhere you look. The official Together for Yes placards that adorn lampposts everywhere from Dublin to Athlone to Galway, all stops I’ve made on my referendum trip, preach about ‘compassion’. Omnipresent Sinn Fein posters implored voters to ‘Show Compassion’ by voting Yes to repealing the Eighth Amendment to the Irish Constitution that banned abortion. And this sea of ‘compassion’ is not an accident. As a spokesperson for the Together for Yes campaign explained to the Guardian before the vote, it was running with this message of ‘care, compassion and change’ in order not to frighten rural, older, and less certain voters; in order to ‘reach that middle ground’.

Care, compassion and change. The three c-words around which the official Yes lobby built its impressive efforts to overthrow the Eighth. And yet, here’s the thing, the crucial thing, the stirring and inspiring thing: Irish people voted in their millions against the Eighth Amendment not simply to show care and compassion for women, or even to signify their desire for change, however nice and valuable all those c-word things might be. No, they executed their revolt against the archaic, liberty-restricting Eighth in the name of a rather different c-word: choice.

This is what the voters’ polls tells us. A poll of the ‘influencing factors’ behind the staggering 1,429,981 votes in favour of repealing the Eighth – against 723,632 in favour of keeping it – found that choice was the dominant consideration. At the very top of the list of voters’ reasons for rejecting the Eighth Amendment came ‘Women’s right to choose’. Sixty-two per cent of voters said this is the idea that influenced them to say Yes to repeal. In second place was ‘risk to the health or life of the woman’ (55 per cent) and in third place was the problem of pregnancy caused by rape or incest (40 per cent). It’s clear that, overall, and loudly and confidently, a majority of the Irish revolters against the Eighth went to the polls thinking primarily about choice, not compassion.

I point this out not to criticise the Yes campaign, even though I do think that at times it shied away from talking about choice, freedom and autonomy in favour of presenting abortion rights as a mere public-health matter, as a measure desperate women need rather than a right all confident, sovereign women in control of their bodies and minds should enjoy. Rather, I point it out to remind people not to underestimate voters; not to assume that voters need soft, PC buzzword-filled messages in order to coax them to vote ‘the right way’, but rather to see them as people who take liberty and rights incredibly seriously and who should be engaged with at this level.

The Irish vote against the Eighth Amendment has been quite astonishing, and moving. Democratic statements don’t get much clearer than this one: 66.4 per cent of people voted against the Eighth and in favour of increasing women’s reproductive rights and choices. Even those rural parts of the country that snooty Dublin elites expected to say No to repeal – including Connacht/Ulster, from where I write this piece – returned significant Yes majorities. And this also wasn’t the simplistic youth revolt observers were expecting, either. Only over-65s voted in favour of keeping the Eighth (and even 40 per cent of them voted for repealing it); every other age group said Yes to repeal. This was a nationwide democratic stab for the expansion, as that poll of influencing factors found, of ‘women’s right to choose’.

Choice. That is the issue. The issue not only in this referendum, and in the abortion debate generally, but arguably the issue of our times. Do we trust people to make choices for themselves, to govern their lives as they see fit, or do we not? The abortion issue speaks to this question dramatically, hinging, as it does, on the question of whether women should enjoy dominion over their bodies and the right to choose to end an unwanted pregnancy (spiked absolutely thinks they should). But the choice question also infuses, or rather should infuse, so much more of public and political life today.

From Nudge policies to nanny statism, from the censorship of difficult speech to the continued limitations on abortion rights in Britain and other nations, too often the need to restrict or control or inform people’s choices – to use PC newspeak – is taken for granted by officialdom and its cheerleaders. Meanwhile, that great enlightenment ideal that said, in John Stuart Mill’s words, that the individual should enjoy sovereignty over his own body and mind, comes to be denigrated.

This is what should inspire us about the tumultuous democratic events in Ireland. Not that it is a rejection of Old Ireland. Not that voters have showed compassion towards women (although I have no doubt whatsoever that they have done this). Not that this is one in the eye for the Catholic Church. That institution has been dying on its feet in Ireland for a decades now: what’s the point in kicking a man when he’s down?

No, we should be inspired by Ireland because it has just delivered a great blow for choice, for self-government; and it is a conscious blow for choice, as polls reveal. That is the main reason people said Yes. Choice. Let’s make that the c-word we now push into the public realm, unabashedly, as we argue for the expulsion of interfering officialdom from women’s, men’s, parents’ and everyone else’s lives, and for the expansion of our right to determine our futures for ourselves.