How a rewilding experiment created a barren wasteland of starving animals. 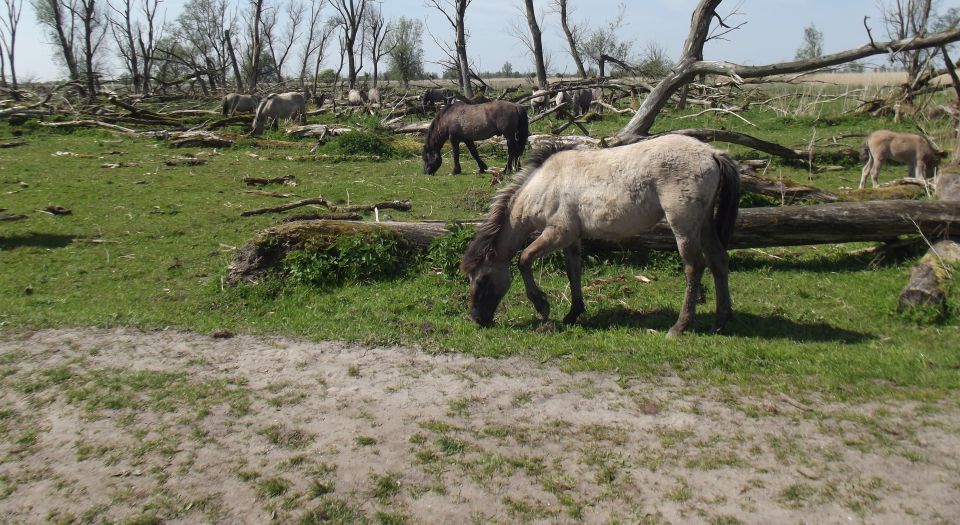 ‘Hey kids, let’s go and see the animals at the Oostvaardersplassen nature reserve’, is not something any Dutch parent is likely to say to their children, these days. Last winter, they might have seen park rangers shooting thousands of skeletal animals, rotting animal carcasses, and a barren landscape dotted with dead trees. Rather than a place of natural harmony, the reserve now resembles the nightmarish visions of Hieronymus Bosch. A new report by Amsterdam’s provincial government has called for fundamental changes. A petition for the reserve’s closure has been signed by over 125,000 people.

Events in the reserve this winter have attracted attention not only from concerned Dutch citizens, but also from around the world. The park has hitherto been held up as a model for rewilding – the planned introduction of plant and animal species, which are then left to develop independently of human influence. But events at Oostvaardersplassen have revealed that the misanthropic ideology that lies behind rewilding is fundamentally flawed.

The Oostvaardersplassen consists of 56 square kilometres of land reclaimed from the sea, a short drive away from Amsterdam. Originally intended as an industrial zone, it long laid undeveloped and abandoned. Under the influence of the Dutch ecologist Frans Vera, it was reinvented during the 1980s and 1990s, ostensibly as a safe haven for nature. Natural processes would be allowed to take their course and human intervention would be eliminated as much as possible. Human intervention, rewilding advocates argue, is arrogant and destructive to natural ends. As British ecologist George Monbiot argues, rewilding is the perfect antidote to ‘the Biblical doctrine of dominion’ – the destructive basis of the modern human relationship to nature.

Left to their own devices, the park’s many species of flora and fauna were supposed to achieve a natural equilibrium and thrive. In this so-called ‘Dutch Serengeti’, rare species would multiply. They would also be protected from prying human eyes and trampling feet, as people are actively prevented from visiting many areas of the reserve. Over time, red deer, Konik horses and Heck cattle have been introduced. It was hoped that these large, wild herbivores would mimic the grazing of extinct species like aurochs. Not only could rare species be reintroduced to the environment, but they would also help ensure that the reserve had both woodland and open landscapes populated by wandering herds of grazing animals.

But introducing large herbivores into a reserve without natural predators has inevitable consequences. In mild winters, many of the animals survive. As the numbers get too large for the area they are confined to, their food runs out and they start to starve to death. They eat everything edible, including the bark of trees, which then die as well. Other species also decline as a result.

After three recent mild winters, the problem in Oostvaardersplassen could no longer be ignored. The nature reserve is now a barren wasteland of mostly distressed animals. As the numbers of starving animals spiralled, members of the public took matters into their own hands by attempting to feed the animals themselves. In the end, park rangers had to shoot 90 per cent of the starving herbivores to prevent further suffering.

The official report into the events at the reserve comprehensively undermines many of the arguments for rewilding. The core conceit of rewilders like Monbiot is that there is a way of removing human decision-making, control and ‘dominion’ from often quite significant tracts of land. Indeed, many Dutch ecologists continue to argue that the park must be left as a wild space and that the animals must be left to starve, as it is a natural process.

But herein lies the essential contradiction of rewilding. There is nothing truly natural, or indeed wild, about the reserve. It is only thanks to man-made land that the reserve can exist at all. Humans decided to introduce these animals and decided to exclude predators that would control their numbers. As the report argues, if the reserve is not really a naturally wild place, then neither is the mass starvation. The park is a human creation and its problems should be solved by humans.

The report also exposes the disdain rewilders have for the public. The reserve could be a major attraction to nature lovers, tourists, trail walkers and other visitors. But it has been deliberately cut off by bad signage, poor access routes and strict control over visitor numbers. This has been part of its downfall, the report implies. Its supporters have made no effort to engage with ordinary people, who they see as part of the problem they are trying to address. So when problems have emerged, the reserve has found itself without public support.

The experience of this Dutch nature reserve tells us that it is not in any way positive for humans to abandon control over our surroundings. As the report into the fiasco of Oostvaardersplassen makes clear, we need more and better control of our environment, not less.