The Twitter bombardiers have no idea of the horrors they will unleash. 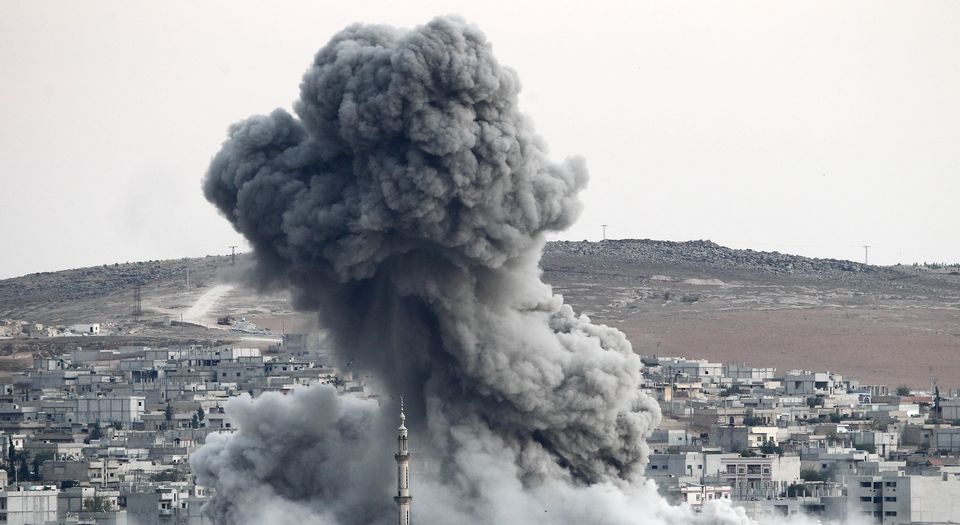 It is the casualness, the thoughtlessness, with which Western leaders promised to bomb Syria that has been most horrifying.

War, you might think, is a serious endeavour. One that requires thought, discussion, a weighing-up of consequences. There has been none of that in Theresa May’s media-trumpeted promise to avenge the victims of the alleged chemical attack in Douma, or Donald Trump’s Twitter-blasts against ‘the animal Assad’ and his hints that he will punish Russia and Iran for supporting him, or in commentators’ demands that we bomb Syria because it is our ‘moral imperative’. On the contrary, these Twitter bombardiers, these iPad imperialists, openly eschew thought. Thought is for cowards. We must simply act and act now to show that we are good, they cry. They have no idea of the horrors that even their escalation of the tensions over Syria, regardless of whether or not they drop bombs, could unleash.

The behaviour of Western leaders has been alarming. They are like infants, bereft of the capacity for cool analysis, utterly lacking in diplomatic discretion. We mock teenagers and celebrities for Instagramming the minutiae of their lives, but such emotional incontinence pales into insignificance in comparison with the way the leaders of the free world have blurted through their iPhones their intention to punish some of the most powerful nations on Earth.

First Trump responded to Assad’s alleged chemical assault by tweeting that Assad would pay a ‘big price’, as would Russia. When the Russians said they would shoot down American missiles, Trump tweeted: ‘Get ready Russia, because [missiles] will be coming.’ Then Theresa May’s insiders, clearly with her say-so, told the media she wants ‘military action against Assad’. This is how war is prepared for now: with a leaked comment; with an eye on retweets, rather than on whether Britain threatening to enter into a war that will essentially be with Russia is a good idea.

It is bad enough when domestic politics is reduced to gesture and PR, where spindoctoring and headline-hunting take precedence over really thinking through what needs to be done with the NHS or the economy. But to reduce global politics, such serious life-and-death matters as military intervention and the West’s relationship with Russia, to the stuff of fired-off tweets is positively lethal. That both Trump and May have now backtracked on their infantile war talk – Trump says an attack could take place soon or ‘not so soon at all!’ – is not evidence that they have come to their senses. Rather, it highlights the staggering folly of their initial comments, of their unanchored, undiplomatic threats, of their transformation of war from the pursuit of politics by other means into the pursuit of PR benefits by other means. Their driving force remains, not reason or realpolitik, but the imperative of PR.

Now, the US defence secretary James Mattis says the US is still looking for evidence on who carried out the Douma attack and says Washington is worried that a US strike on Syria could ‘escalate out of control’. So after the threat of war against Assad comes the search for proof that Assad is responsible for Douma. After Western leaders warn Russia that missiles are coming comes the concern that such military intervention could ‘escalate out of control’. To organise international affairs in such a threaten-first, find-proof-later manner is incredibly dangerous. It speaks to the loss of any diplomatic or serious sensibility among those who oversee politics in the 21st century.

The truth is that it is too late to worry about things ‘escalating out of control’. The escalation is done. You cannot corner a nation like Russia with warnings and promises of missiles and expulsions of their diplomats and expect there not to be dire consequences. Russia is not Libya or Somalia or Panama or any of the other nations the West has threatened in recent decades. It is Russia. It has an international reputation to protect, it has interests in the Syrian theatre, and it is increasingly concerned with what NATO is doing in the nations around its borders. Threatening it – ‘missiles are coming’ – is a deeply serious, destabilising business. That our leaders seem not to know this is terrifying. They play with fire and don’t even know they play with fire.

We won’t be the ones who suffer, though. It will be Syrians. The determination of some in the West to make Syria a stage upon which they might further re-enact the Cold War they so badly miss will intensify and further internationalise the Syrian conflict, injecting even more global concerns into a war already riddled with them. It will inflame oppositional forces, who will spy in the West’s war talk a chance to put further pressure on Assad. It will entrench Russia, which now, right away, has even more to lose in Syria than it did previously. Russia will now see itself not only as backing Assad in Syria, but also as defending its international integrity there. It will draw Turkey further into the region: witness Turkish ministers echoing Trump and saying, ‘Assad must go’. It will convince Iran that Syria is the place in which it must demonstrate its regional power, given that Syria is the place in which the West now calls into question its regional power. The war is bloodier, already. More intense, already. People will die as a result of the infantilism of the foreign offices of the West.

And what will they die for? Nobody seriously believes a few bombs dropped in such a destroyed nation as Syria will save lives or end the war. But the bombs won’t be designed to do that. Their sole aim will be to send a message about us. They will in essence be militaristic press releases designed to make a statement about the apparent moral seriousness of the Western world. Douma is ‘our shared shame’, says a writer for the Guardian who insists a military assault is our ‘moral imperative’. Douma is ‘an assault on the world’s conscience’, says one headline. Douma’s ‘dead children… chide us through our [TV] screens’, says one pro-bombing observer.

The narcissism! They think this war is about them; they think the dead children are about them; they think everything is about them. They want bombs on Syria not because they think such action will solve the crisis – they often admit it won’t – but because they hope it will salve their consciences. Make it easier for them to look in the mirror. That Western war talk and action are likely in fact to make things worse is immaterial to them – all that matters is that their ‘shame’ is leavened. Syrians will pay a bloody price for this narcissism. They already are. The escalation has already happened. The stakes are already raised. The war is already worse. If you must feel shame, feel shame that you have done that.