The Birthday Party: a 60-year-old play for today

Harold Pinter’s play is as ‘original, disturbing and arresting’ as ever. 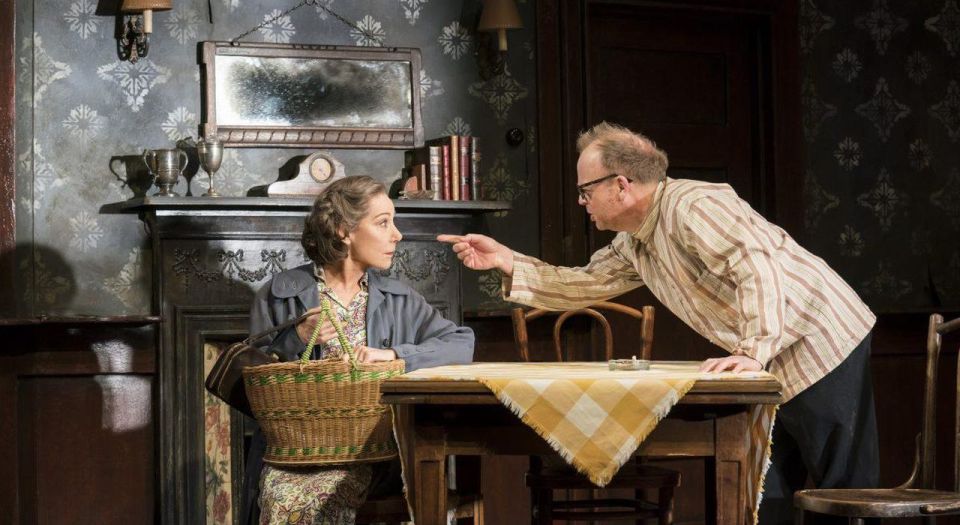 As we left the Harold Pinter Theatre in London’s West End this week, after seeing The Birthday Party, a young woman in front of us asked her friend the standard post-show question: ‘So, what did you think?’ The second young woman thought for a moment before replying (with just a touch of the Catherine Tate): ‘…I dunno!’ Which, it struck me, is an entirely appropriate response to an early Pinter play that still defies easy definition and refuses to provide obvious answers and endings.

If somebody asked what I thought, I would say that the timely 60th anniversary production of The Birthday Party, directed by Ian Rickson and performed by a suitably stellar cast, shows that it remains a powerful play for today.

Yes, it has all the usual elements so often classified/caricatured as ‘Pinteresque’, from the pauses to the opaque dialogue. It also typifies that strand in Pinter’s work sometimes called ‘the Comedy of Menace’ (the playwright didn’t like that label, but then he didn’t like any attempt to pigeon-hole his writing). There is much more going on here, however, than a rerun for old time’s sake.

Pinter wrote The Birthday Party in 1957 – at the age of 27 – and it was first staged the following year. Its London debut closed within the week, having been savaged by the critics. They and their audiences apparently preferred the sort of new ‘political’ theatre characterised by John Osborne’s Look Back In Anger, with its set-piece conflicts and long rhetorical critiques of social injustice.

By contrast, as Mark Taylor-Batty observes in his essay ‘1957 and all that’ (printed in the current show’s programme), ‘Pinter questioned any presumptions that in order to be meaningful theatre had to deliver soluble puzzles played out within visibly recognisable events by easily categorisable characters’. It seems the young writer was rebelling against the type of tired rep melodramas he had to act in to pay the bills, where the detective arrives in the final scene to tie up all the loose ends explain away everything that has happened over the previous two hours.

When I caught the film version of Look Back In Anger on TV recently it looked badly dated (despite Richard Burton), and not only because it was shot in black-and-white. Yet The Birthday Party has surely never looked better, fresher or funnier.

Time has proved right the one major critic who praised that 1958 production after it had already been cancelled. Harold Hobson of The Sunday Times wrote: ‘I am willing to risk whatever reputation I have as a judge of plays by saying… that Mr Pinter, on the evidence of this play, possesses the most original, disturbing and arresting talent in theatrical London.’ Sixty years later, and almost a decade after his death, the evidence of this original, disturbing, arresting play suggests that is still true.

The Birthday Party is set in a dingy seaside boarding house where an odd middle-aged couple, Meg (played by Zoe Wanamaker) and Petey Boles (Peter Wight), have only one guest, the shambling Stanley Webber (Toby Jones), who never goes out. (Pinter apparently got the idea from an encounter in just such a shabby B&B, where the sole resident said he stayed because ‘there is nowhere else to go’.) The daily rituals of the trio’s existence are disturbed and then destroyed by the arrival of two mysterious strangers, Goldberg (Stephen Mangan) and McCann (Tom Vaughan-Lawlor), who we learn have come looking for Stanley from somewhere out of his past. The action we get to see, climaxing in the bizarre and brutal birthday party staged for Stanley, all takes place in the claustrophobic living room, the outside world represented only by the sound of seagulls and of Goldberg’s car driving away with the captive Stanley at the end.

There are no simple heroes or villains in The Birthday Party, where all identities, memories and histories are cloudy and the power relations between characters shift like the seaside sands along which Petey rents deckchairs. The central figure, Stanley, is an ambivalent character, a ‘wash-out’ brought to multi-coloured life by the brilliant Toby Jones, as a belligerent game-playing bully before he is ultimately broken. His tormentors – the Jewish boss Goldberg and his Irish ‘bloodhound’ (Pinter’s word) McCann – have their own near-breakdowns and moments of uncertainty about who they are meant to be and what they are supposed to be doing.

One clear and powerful theme that does run through The Birthday Party, and still rings down the decades, is about the individual and conformism. Goldberg and McCann have been sent to get Stanley because, they claim, ‘You betrayed the organisation’. Exactly which ‘organisation’ Stanley is supposed to have betrayed and deserted remains a ‘Pinteresque’ mystery. Do Goldberg and McCann represent the devil and his disciple, or the earthly powers of church and state? You pays your money (£15 seats at every performance if you have a head for heights) and takes your choice. In any case, he is seen as some sort of heretic who must be brought to heel.

For an old leftie like me, it is also tempting to interpret that demand for conformism in the context of 1950s politics; on one side the anti-communist witch-hunt of McCarthyism, on the other the strongarm orthodoxy of the Stalinists. Pinter wrote The Birthday Party the year after Soviet tanks crushed the Hungarian revolution of 1956, a bloody tragedy which prompted many Communist Party members to ‘leave the organisation’. Towards the end of The Birthday Party, Goldberg’s big personal testament seems full of references to a different sort of party – ‘Follow the line, the line, McCann, and you can’t go wrong’. But maybe that’s just me.

Whatever interpretation you favour, the interrogation scene in the second act where those forces of conformism bear down on Stanley is at once electrifying and hilarious – the embodiment of the Comedy of Menace, as if O’Brien’s interrogation of Winston Smith in Nineteen Eighty-Four had been played for acid laughs. The torrential questioning is also an example of what Pinter described as the second of ‘two silences’ in his work: ‘One when no word is spoken. The other when perhaps a torrent of language is being employed. This speech is speaking of a language locked beneath it… The speech we hear is an indication of that which we don’t hear. It is a necessary avoidance, a violent, sly, anguished or mocking smokescreen which keeps the other in its place.’

Today of course we in Britain and the West are faced with a different sort of demand for conformism. The thoughtpolice are now less likely to use jackboots and violence behind closed doors than public displays of outraged victimhood and informal censorship. Yet the message to heretics remains much the same; as Goldberg tells Stanley, ‘We’re right and you’re wrong, Webber, all along the line’. It might not be too hard to reimagine the ‘torrent’ of abuse and threats they pour on Stanley as a 21st-century Twitterstorm. The aim remains to force the heretic into silence by, as with Stanley, taking away his voice and mind.

No doubt there are aspects of a play written 60 years ago that might appear dated to some today. The genuinely strange scene of one man blowing air into another’s mouth from a discreet distance was, after all, written a decade before private acts of adult homosexuality were decriminalised in Britain. And the scenes between the middle-aged Goldberg and the only other character at the party, a young woman called Lulu (Pearl Mackie), would be unlikely to meet with the approval of the #MeToo censors in drama today:

Lulu: You used me for a night.
Goldberg: Who used who?
Lulu: You made use of me by cunning when my defences were down.
Goldberg: Who took them down?
Lulu: You taught me things a girl shouldn’t know before she’s been married at least three times!
Goldberg: Now you’re a jump ahead! What are you complaining about?’

Perhaps we should be grateful it is still possible to speak and hear such lines on a London stage.

Yet 60 years on, The Birthday Party retains its ability to shock and disturb, making no concessions to the fashion for ‘family-friendly’ drama while leaving much of the horror to the imagination. The night we saw it, somebody was apparently sick in his hat in the stalls. Nothing to do with the play, I’m sure, but it did seem a symbol of Pinter’s ability to provoke a visceral as well as intellectual reaction.

It was the later Pinter who would become an earnest left-wing activist and writer. The Birthday Party reminds us, however, that he was always writing about politics with a small – sometimes a very small – ‘p’. Pinter once described as ‘one of the most important lines I’ve ever written’ the parting shot from the broken Petey, as his apparent executioners take Stanley out of the house: ‘Stan, don’t let them tell you what to do!’ Or to think.

There are only a couple of weeks left to see this production of The Birthday Party before it closes again on Saturday 14 April. It will not be to everybody’s taste. But catch it if you can. Just watch out for your hat in the stalls.

The Birthday Party is at the Harold Pinter Theatre in London until 14 April.