Afrin: the shame of the West

Why Western leaders are silent on the barbarism against the Kurds. 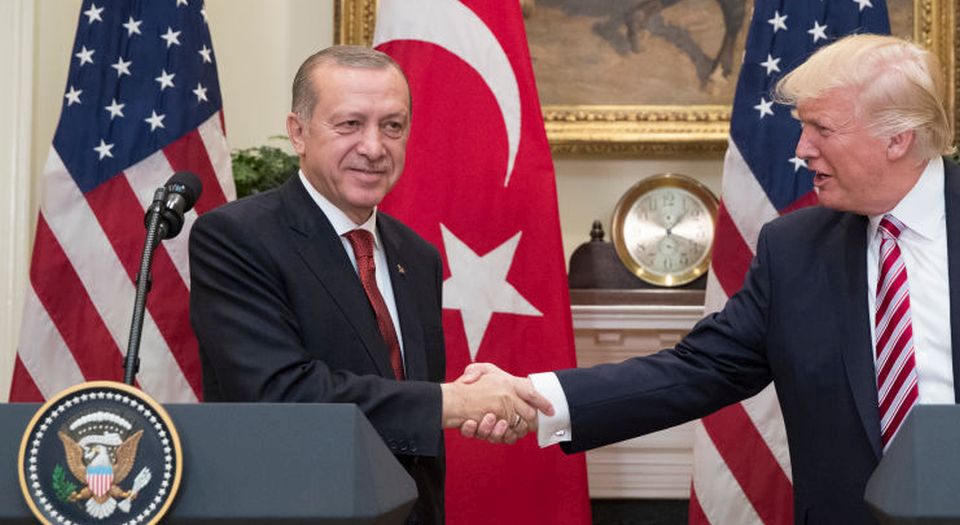 There has been no shortage of international outrage over the Syrian government’s military assault on rebel-held eastern Ghouta. Since mid-February, when Bashar al-Assad’s forces upped the ante in this suburb of Damascus, besieged for the past six years but now being bombarded from the air, and invaded on the ground, Western leaders have been united in condemnation of the Syrian government and its Russian and Iranian backers. President Donald Trump has called for a ceasefire; British foreign secretary Boris Johnson has urged the West not ‘to stand idly by’ as Assad bombs his own people; and German chancellor Angela Merkel and French president Emmanuel Macron seem to have made peace in Ghouta a personal mission, sending a co-signed public letter to Vladimir Putin, accusing Russia’s allies in Syria of ‘clear violations of international humanitarian law’.

It is a call that has resonated with its Western political audience. Labour’s shadow foreign secretary Emily Thornberry, recycling the rumours of chemical-weapons usage, has talked darkly of a ‘war crime’, while the UN high commissioner for human rights, Zeid Ra’ad al-Hussein, has promised some form of legal retaliation: ‘Civilians are being pounded into submission or death. The perpetrators of these crimes must know they are being identified; that dossiers are being built up with a view to their prosecution; and that they will be held accountable for what they have done.’

So when the United Nations described the situation in Ghouta has ‘hell on Earth’, Western heads eagerly nodded in agreement. After all, why wouldn’t they? The brutal siege of and now attack on eastern Ghouta fits the West’s persistent, simple-minded narrative on Syria. This, so the story goes, is the longstanding tale of a yet another Middle Eastern dictator, struggling to maintain his grip on power except by means of military force, a tale of a bad man doing bad things to his own people. And in the background, of course, pulling the strings, is Putin’s Russia, backing the bad man with military force, and shoring up a corrupt regime at the expense of the Syrian people. In this telling, the US and its allies in NATO and the EU, appear as the good guys, supporting the Syrian rebels in their various guises against the bad guys, from Assad to Putin and Iran. And the assault on eastern Ghouta, like the siege of Aleppo before it, is proof positive of this narrative, a desperately grim manifestation of the baddie-driven dynamic impelling the Syrian conflict on.

As stated above, this is the persistent narrative on the Syrian conflict in the West. It is also a persistently misleading narrative. For a corrective, look no further than Afrin, both a city and region in north-eastern Syria, where an equally merciless assault on citizens has been carried out. First came the fighter planes and missiles just over six weeks ago, then the ground troops moved in. And now, the brutal triumph, with the invading fighters celebrating their victory in Afrin this weekend, turfing out their antagonists, and, with them, nearly 200,000 Afrin residents.

Yet there has been no condemnation of what has just happened in Afrin. The assault was just as merciless as the Syrian government’s on Ghouta. And the results have been just as dismaying, with countless Syrians losing their lives, and many, many more joining the hundreds of thousands of Syria’s displaced peoples. But the assault on Afrin has barely raised one of Boris Johnson’s befringed eyebrows.

And that is because it just does not fit the Western narrative. Those driving out the inhabitants of Afrin were not Assad’s troops; they were Syrian rebels, members of the so-called Free Syrian Army. And the planes and missiles (and not a few troops) were not of Russian provenance; they were from neighbouring Turkey. They were from a member of NATO. They were from a nation regarded as a Western ally. This brutal, unforgiving assault on a Syrian city was therefore organised and carried out by a nation too close to the West for comfortable condemnation, outraged-of-Paris-and-Berlin letters, and declamations from the UN. So those normally found expounding on the evils of Assad and Russia, and speaking gravely of the suffering of the Syrian people, ‘stood idly by’, as Johnson put it.

In fact, that’s probably too passive a description of the West’s involvement in the Turkish takeover of Afrin. Western states green-lit Turkey’s move, gave it their approval. Johnson himself tweeted in January that ‘Turkey is right to want to keep its borders secure’, while NATO deputy secretary-general Rose Gottemoeller visited Turkey just as it began its Afrin offensive to praise Turkey’s democracy and emphasise its need for security. The US urged Turkey ‘to show restraint and ensure its military operations remain limited in scope and duration’, which is the least it could do given it had used the Kurds to do its fighting against ISIS, but otherwise lent Erdogan its blessing.

To further muddy the already turbid waters of this most thoroughly internationalised of civil conflicts, the Turkish state’s client militia, the so-called Free Syrian Army, consists now of assorted Islamists, including one-time and possibly current al-Qaeda and ISIS fighters. So completely compromised is the West in the Syrian catastrophe that its leaders are now, by backing Turkey, effectively also backing the very people the US and its allies have spent the best part of three years fighting in Syria and Iraq.

Of course, Turkey has justified this invasion of Syria on the grounds that Afrin has, since 2012, been in the hands of the Syrian Kurds’ militia, the YPG, which it claims is covertly affiliated with the outlawed Turkish group, the Kurdish Workers’ Party (PKK). So, from the perspective of the Turkish president, Recep Tayyip Erdogan, the conquest of Afrin is one in the eye for those it considers an existential threat. Hence he celebrated the Afrin victory at a First World War commemoration ceremony in Gallipoli on Sunday: ‘This morning at 8.30am, Afrin city centre was completely taken under control by FSA members, who are supported by our Turkish military’, before adding, ‘the majority of terrorists had already escaped, their tails between their legs’.

If by ‘the majority of terrorists’ Erdogan was referring to the nearly 200,000 Kurds who fled Afrin over the weekend, then he is certainly right to say they escaped. As well they would given the FSA is populated by those Islamist factions Kurdish fighters have been battling in their conflict with ISIS. That one of the FSA’s first acts upon entering Afrin was to pull down a centuries-old statue of Kawa the Blacksmith, a figure from Kurdish and Persian mythology, indicates the depths of their ethnic animus towards the Kurds. Moreover, the fact that there was a Kurdish statue to pull down also tells us something about Afrin. This was not a city, indeed a region, taken over by the Kurds as the Syrian state lost control of its territory in 2012. Rather Afrin is a region that, since the 18th century, has been predominantly Kurdish. Indeed, it is an area known as the Kurd-Dagh – the Mountain of the Kurds – in which, alongside Afrin itself, nearly 400 Kurdish villages ‘make it the most densely Kurdish populated part of Syria’. Turkey and the Free Syrian Army haven’t retaken territory from a foreign force. They’ve simply taken it from the Syrian people (75 per cent of whom are ethnically Kurdish) who live there.

So, on the pretext of securing Turkish borders, of fighting a ‘terrorist group’, Turkey and its Western allies have killed and displaced huge numbers of Syrian Kurds. And they have done so using a client militia consisting of those who, when they’re not pulling down statues of Kurdish folk heroes, are declaring war on the West, and calling on their brothers to drive lorries into crowds in London or Berlin. Far from being a simple tale of good-versus-Russia, the reality of Syria is a compromised, cynical mess in which international actors on either side are making endlessly cynical calculations as to what might, at this moment, be in their interests. And as it stands, those calculations are being made at a very steep cost to the Syrian people themselves, be they Arab or Kurdish.