It isn’t only Trump who loves a trade war

The EU is just as protectionist and anti-China. 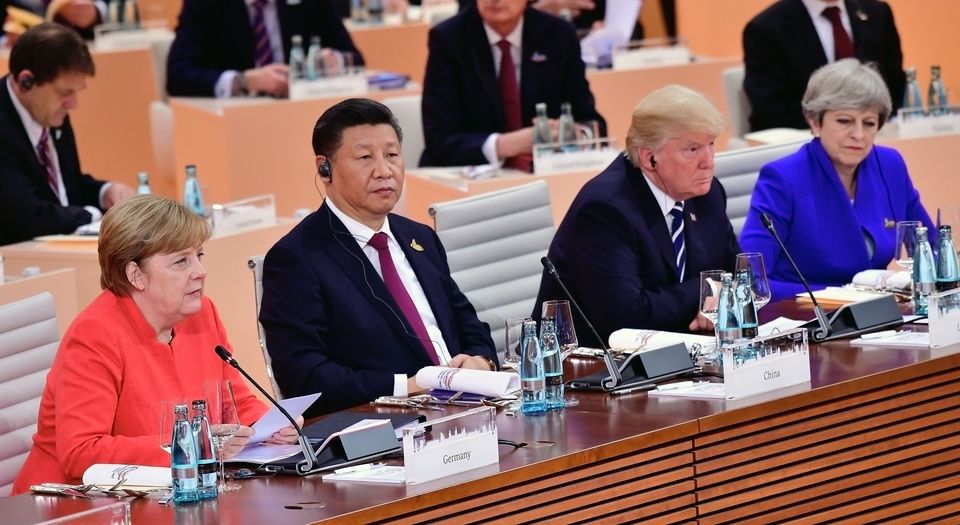 Another tweet from the POTUS, another ratcheting up of international tensions. This time, Donald Trump’s tweets about trade wars, ‘big imbalances’, and ‘very stupid’ decisions made by his predecessors, came on the back of his surprise – to everyone apart from himself, it seems – announcement that the US will impose a 25 per cent tariff on steel imports and a 10 per cent tariff on aluminium imports, possibly as soon as this week. Given the US is the world’s biggest steel importer, that’s going to affect a lot of people.

What it’s not going to do, as many of his critics have rightly pointed out, is benefit many people. It will further destablise inter-state and inter-state-bloc relationships, antagonising supposed allies and enemies alike, who will no doubt go, puce-faced, to the World Trade Organisation and ask to implement retaliatory trade barriers and taxes. And in terms of Trump’s own stated aims, it will damage rather than boost American industry. After all, the costs imposed on steel imports won’t be shouldered by overseas steel producers – they’ll be passed down the production line, factored into the manufacture of anything from cars to beer cans, and then passed on to consumers. International companies are already panicking, and postponing investment in the US while they wait to see what Trump’s next unilateral move is.

Yet his critics on both sides of the Atlantic, as always, overplay their hand. They act as if Trump’s arch-protectionist posture was somehow exceptional. They present it as almost uniquely stupid, a testament to the sheer idiocy of the man, the asininity of his White House team, and, always in background of mainstream anti-Trumpism, the folly of those who voted for him.

If they peered beyond their own loathing for Trump and Trump voters, and the blow to their privileged, ruling position that Trump represents, they’d see that Trump is not so much breaking with as continuing the trajectory of US and Western policymaking. His protectionist move is certainly, as you’d expect, more clumsily and tactlessly presented, and more buffoonish in intent. But it’s of a piece with the protectionist direction of US and Western economic management. Even steel tariffs themselves are hardly unprecedented in recent US history. The George W Bush administration implemented a steel tariff in 2002, which was lifted a year later after the economy failed to bounce, and unemployment rose. (Indeed, it is estimated that the ensuing rise in steel prices in the US after Bush’s tariffs cost 200,000 people their jobs.)

Not that lessons were learned. Independent research shows that the US has not been a bastion of free trade over the past two decades, despite the image to the contrary. In fact, since 2009 – that is, under the benighted reign of Barack Obama – the US passed nearly 1,300 economic or trade measures deemed to be ‘harmful’ to global trade (including Obama imposing tariffs on Chinese tyres), compared to just 206 ‘liberalising’ measures.

More striking still has been the blindness of those in the UK whose hatred of Brexit is bound up with their hatred of Trump. For this coterie of small-minded pro-EUers, Trump’s made-in-the-USA sabre-rattling, his tweeted threats of a trade war, illustrate, as everything seems to nowadays, the folly of leaving the economic embrace of the EU. ‘The ramifications of [Trump’s protectionism] don’t just apply to steel and aluminium’, notes a Guardian commentator: ‘Trump’s response also illustrates the dangers of relying for a post-Brexit economic strategy too much on striking a free-trade deal with someone who does not actually believe in free trade.’ Over at the Independent, another anti-Brexit columnist turns Trump’s protectionism into, well, another anti-Brexit rant: ‘Leaving the EU Single Market and Customs Union are, nevertheless, inherently trade-destroying policies for Britain; perhaps the most destructive since the Second World War.’ And, never one to miss a chance to stick the boot into Brexit, Lord Adonis tweeted his two-penneth: ‘MAY TELLS TRUMP NOT TO LAUNCH TRADE WAR – Times headline – while proposing trade divergence from EU that will very likely end up as… well, a war. Amusing if it wasn’t so serious.’

What undoubtedly is amusing is anti-Brexiters’ constant transformation of the EU into something it never has been or will be – in this case, a beacon for free trade and prosperity. Because far from striking a blow against the kind of protectionism being promoted from up on Capitol Hill, the EU is second only to the US in terms of trade warmongering. So fiercely protectionist is the EU that it is estimated that almost half of all EU trade policies launched since 2009 impeded international trade with countries outside the Single Market. Indeed, the Customs Union, currently being advertised by Labour as the promised land, may permit tariff-free trade between EU member states, but its simultaneous purpose, through the Common External Tariff, is precisely to regulate and tax imports from non-members – hence the predictably incredible 13,000 different taxes, including quotas, imposed by the EU on goods from outside Fortress Europe. And do you know what one of its most recent contributions to free trade was? A tariff on… steel imports from China. As the European Parliament’s rapporteur for the steel tariff put it in December, ‘it’s a vital legislation’ to help ‘preserve the European industry’ and ‘prevent the loss of hundred of thousands of jobs in the EU’. Definitely a ‘Brussels First’ moment.

So blinded by their own spittle are Trump’s and Brexit’s critics, so hypocritical are they when it comes to protectionism, that they can’t see what is perhaps the most dangerous aspect of this wave of protectionism: namely, that it is driven by an animus towards China. It shouldn’t be a surprise, of course. China’s state-capitalist ramping up of steel production, creating ever cheaper steel imports over the past decade, has long been blamed for the economic, industrial travails of Western states. But in the hands of team Trump, this animus towards China has become ever more pronounced.

Indeed, its irrational, hyperbolic nature has frequently been expressed by Steve Bannon, Trump’s one-time chief adviser, who told the New York Times last September that ‘A hundred years from now, this is what they’ll remember – what we did to confront China on its rise to world domination. China right now is Germany in 1930. It’s on the cusp.’ Lest one think that Bannon’s departure took with it this strain of Sinophobia, note that Peter Navarro, the director of the White House National Trade Council, confirmed that China was the reason for Trump’s tariff announcement. ‘China is at the root of the problem’, Navarro said. ‘[It] has tremendous overcapacity in both aluminium and steel. They flood the world market and this whittles down to our shores.’

This is what is truly worrying about Trump’s Twitter bombast about a trade war. It really does seem motivated by a desire to fight China, to turn China into the national, and international, threat; to antagonise and inflame an already unstable international scene, one riven for the past year by nuclear-fuelled posturing in China’s backyard over North Korea. And, as history shows, trade wars are more than just a prefix away from war proper. As it stands, however, the Chinese state seems emollient. ‘There are more common interests [between China and the US] than differences, so co-operation is the only option for both countries’, said Zhang Yesui, vice-foreign minister, on Sunday. ‘China does not want a trade war with the US.’

It may well not. But it seems that the US, and the EU, do not share its pacificism.