A tale of the power of free speech has become a parable of modern feminism. 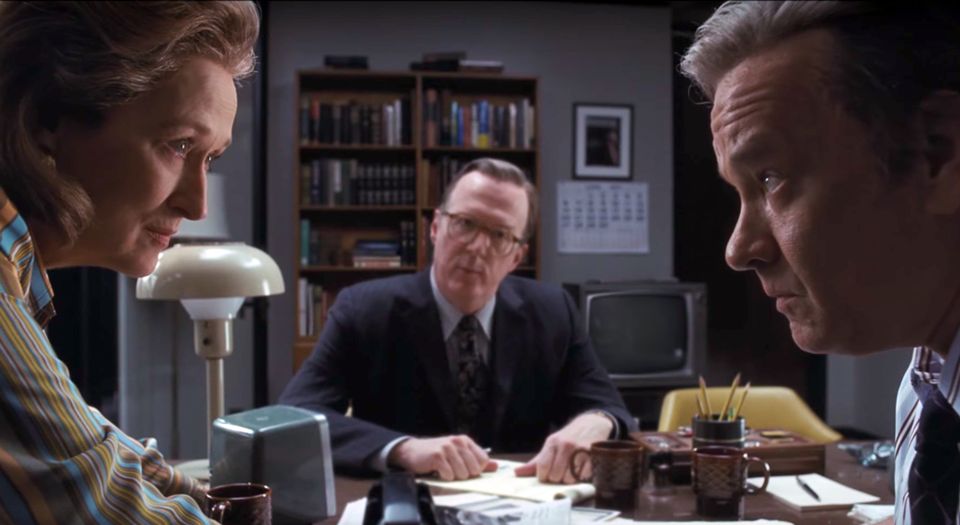 Back in 1971, when this docudrama is set, it must have been tough being a newspaper baroness. Especially if you only came into the position as a legatee. Especially if you’re floating your business on the New York Stock Exchange at somewhere between, oh, $24.50 and $27 a share – and at a moment when your organ is strapped for cash. And especially if you’re up against President Richard Nixon, who issues threats to everyone, and in particular to newspapers out to publish the truth about the Vietnam War.

Worst of all, it must be tough if you’re the only woman among a team of investor and banker backers entirely composed of male grey suits with grey hair. And it’s tough if you, or your editor, have been or remain friends with some of the principal war criminals your newspaper might finally, after many years, get round to exposing: JFK, LBJ, defence secretary Robert McNamara, those kinds of people.

These kinds of challenges are the main event in Steven Spielberg’s The Post. Oddly enough, though liberal film critics have hailed the movie as a brilliantly timed riposte to Donald Trump’s oft-voiced disgust for the media, nothing here captures the grandeur of the struggle for free speech. There are some windy newsroom perorations, and one or two strong lines; but because the action is confined to Washington Post editor Ben Bradlee (a thin, driven and excellent Tom Hanks), and even more to proprietor Katharine Graham (a twitchy and overdone Meryl Streep), we get little sense of the epochal context for the Nixon-Post dispute. Nor do we learn a whole lot about the principles at stake in the momentous decision over whether to be prudent and not publish a murderous history of US deception around the Vietnam War, or whether to realise that failure to publish meant being seen to be running scared.

For momentous the eventual decision certainly was. With America reeling in the wake of the Viet Cong’s Tet Offensive (1968), the end of the 1960s boom and widespread agitation against the war, publishing extracts of what became known as the Pentagon Papers could only have an explosive impact. When Daniel Ellsberg, a dissident war planner, decided to leak a top-secret intelligence history of the US in Vietnam, he didn’t just reveal how successive presidents from Harry Truman on had lied to Congress and the American public. He also showed how the Pentagon continued to pour US troops into Vietnam long after it had concluded that the war there was unwinnable. The only real reason for America to continue hostilities was to spare it the humiliation of defeat in the eyes of the world.

Spielberg, however, is more detained by other issues. Twice we hear, rather indistinctly, about the Post’s historic local-newspaper rivals – Gannett and Knight Ridder. Twice we learn that, in running a Democratic Party business like the Post, ‘quality and profitability go hand in hand’ (eh?). Twice we see a silhouette of a pretend-Nixon in the White House, miming rather badly to the secret Oval Office tapes that the real Tricky Dicky made of himself. And, for younger viewers, there are endless rub-your-nose-in-it close-ups on the clunky old 1960s/1970s: typewriters, a giant photocopier, hot metal type, payphones, plain old stationary phones.

We keep on being told how thick Graham and Bradlee were with the Democratic Party hierarchy: as Streep says, of the astonishingly novel tension between professional duties and personal friendship, ‘It’s hard to say No to the president of the United States!’. We keep on being told How Hard It Was For Working Women Back Then – after all, this is an era in which Washington society women had to leave the dinner table once talk turned to politics. Still, there was good news even then: when Streep wins the backing of the Supreme Court for her right to publish, she comes out on to the steps to be properly greeted by her true admirers – a sea of adoring middle-class women.

We get the point, Steven. We know that you, and Tom Hanks, spent time with Katharine and Ben themselves. How courageous they were in speaking truth to power, in high-mindedly representing the public interest, in being America’s conscience, in being an early version of the Resistance to Trump! How courageous it was for the Post to beat the New York Times, which was actually first with the story, by sending a young reporter to look over the shoulder of NYT staff at documents they’re foolishly brandishing in a lift – a great feat of shoe-leather investigative journalism in 2018, let alone in 1971!

Twice, in The Post, we see unconvincing protest demonstrations, with extras variously too clean, too uniform and too listless to be believed. For Spielberg & Co, free speech isn’t as important as modern-day American feminism. It can be defended only by moneyed media Democrats, and not at all by the unkempt masses.

But we know different.