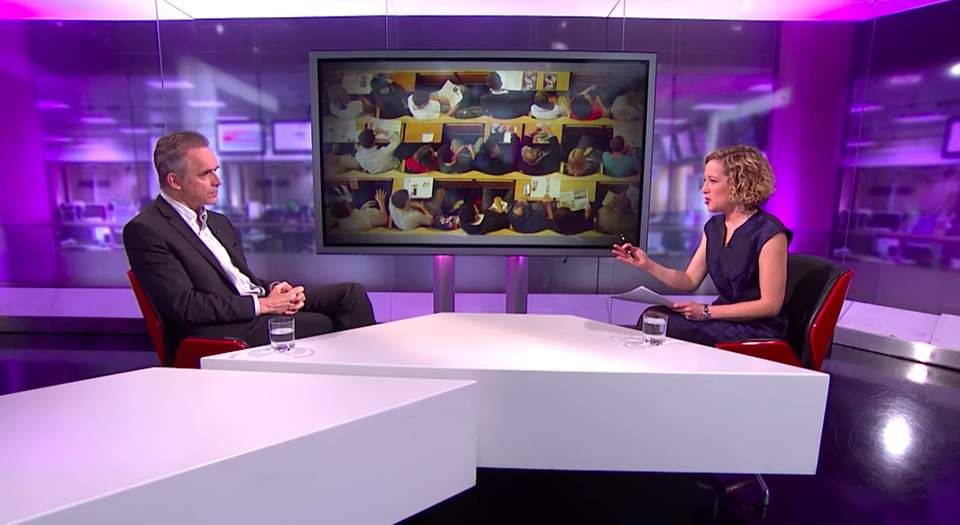 There are two Jordan Petersons, writes Andrew Doyle. The first is a professor of psychology at the University of Toronto with a particular interest in religious and ideological belief systems. Many of his lectures on self-improvement have been circulated via YouTube, and his measured and compassionate approach has enabled him to cultivate a loyal following. The second Jordan Peterson is a notorious firebrand of the alt-right. He is a transphobic provocateur whose lectures amount to little more than hate speech.

Of these two Jordan Petersons, only the first actually exists. The second is a fictional man of straw created by certain elements of the media. Presenter Cathy Newman’s now famous interview for Channel 4 News exemplified this problem. Her continual misrepresentation of Peterson’s position ultimately forced him to make an objection. ‘You’re not listening’, he said, ‘you’re just projecting’. The interview was a failure because Newman wasn’t addressing Peterson at all, but rather a figment of her imagination.

This is one of the reasons why Peterson’s rise to fame is such an important development in the Culture Wars. I have suggested elsewhere that argumentative ineptitude is a hallmark of the identitarian liberal-left. Given this tendency to censure non-existent caricatures rather than engage in debate, it’s hardly surprising that free-thinkers like Peterson are growing in popularity. One commentator for the Independent went so far as to describe him as having ‘the cool calm of a cartoon villain’. Others have explicitly connected him with the alt-right, a movement grounded entirely in the kind of hidebound identity politics that Peterson so vehemently opposes. Insults and smears by association hardly qualify as effective forms of refutation. Peterson’s success is only accelerated when his opponents stoop to such craven tactics.

One of the most common charges against Peterson is that his style is too evangelical. He has been variously termed a ‘crusader’, a ‘false messiah’, and the ‘new prophet’ of the defenders of free speech. He seems to attract the kind of fanaticism more typical of rock stars than clinical psychologists. When I attended his recent talk at the Emmanuel Centre in London, he was greeted with a standing ovation before he had even opened his mouth.

Peterson’s new book, 12 Rules for Life: An Antidote to Chaos, owes a great debt to the stories of the Bible, and there is a patent religiosity to much of his rhetoric. ‘Who knows what eternal heavens might be established by our spirits’, he writes, ‘purified by truth, aiming skyward, right here on the fallen Earth?’. Moreover, Peterson’s emphasis on individual redemption has an undeniably spiritual quality, not unlike the Christian conception of metanoia.

Some will doubtless find this approach off-putting, but it’s worth considering Peterson’s rationale. He sees value in acting ‘as if God exists’, invoking scripture out of a belief in the wisdom of our ancestors and the Christian foundations of Western society. From this perspective, the truths to be found in Christian doctrine are unrelated to the matter of whether or not Jesus Christ was an authentic historical figure. If God is conceived as the principle of a transcendent morality, faith in the supernatural is beside the point.

12 Rules for Life is, as the title implies, a self-help book. It is deliberately accessible, mercifully avoiding the kind of obfuscating jargon that characterises so much academic writing. Peterson’s ‘rules’ each provide a springboard from which he can dive into one of his preferred topics. For example, his first rule – ‘Stand up straight with your shoulders back’ – forms the basis of a discussion about human hierarchical structures and their origins in evolutionary history. His seventh rule – ‘Pursue what is meaningful (not what is expedient)’ – becomes a meditation on the nature of evil and what Peterson describes as ‘the tragedy of self-conscious being’.

That Peterson is considered controversial at all, merely for endorsing the tenets of classical liberalism, is reason enough to take him seriously. Poststructuralists and cultural relativists will rail against the kind of biological essentialism he espouses, but that is only because they know so very little about biology. Others will balk at the very premise of his book. After all, it is perfectly natural to resist the idea of applying a set of ‘rules’ to one’s existence. But Peterson is rarely prescriptive, and, besides, there is always some inherent value in good advice when it is so elegantly expressed.

At the heart of Peterson’s book is the belief that civilisation is only sustained through structure; children must be socialised and adults should strive to operate within clearly delineated ethical parameters. If an unruly child goes unpunished, Peterson tells us, he remains ‘Peter Pan, the eternal boy, King of the Lost Boys, Ruler of the non-existent Neverland’. Accordingly, the poststructuralist impulse to dismantle the certainties of culture – tradition, morality, language – inevitably leads to widespread infantilisation. Peterson’s appeal is largely due to the disillusionment of a younger generation who are desperate for some structure in their lives. His popularity, then, is proof enough that he just might well be right.

If you haven’t heard of Jordan Peterson yet, writes Luke Gittos, then you probably don’t live on the internet. Peterson is being touted as the most ‘important thinker in the West’ and an ‘academic rock star’, after a series of recent, largely web-based controversies surrounding his arguments. His new book, 12 Rules for Life, has rapidly become a bestseller.

Peterson’s fame spiked last week after an interview with Channel 4 News’ Cathy Newman. The video of the interview was widely circulated as an example of how Newman was ‘wrked’, ‘pwnd’ and ‘annihilated’ by Peterson, which is internet language meaning that he won the debate. He did win the debate. But what will be remembered is the insane reaction to Newman’s conduct. The interview was seen by some Peterson devotees as an example of how corrupt the British media have become. Newman put words into Peterson’s mouth and caricatured his position, they say. She constantly tried to ‘trick’ him into arguing something he didn’t really believe. Etc.

Newman certainly appeared unprepared for Peterson and he was clearly more nuanced than she had expected, and it made for an entertaining and lively exchange. Newman did her job by making the debate fun to watch and Peterson could more than handle it. The fact that she apparently received death threats after it aired is a sad indictment of the state of political debate.

Not that this is Peterson’s fault. He is a welcome relief from identity politics. Prior to the Channel 4 News debate, he was already famous in certain circles for rallying against the identitarian orthodoxies of our time. Over the past year, he has made headlines for refusing to use various gender-neutral pronouns when addressing his students. He has criticised ‘social-justice-warrior, left-wing, radical political activists’.

He argued that the policing of gendered language is the first step towards totalitarianism, an attempt to control the ‘ideological and linguistic territory though policing language’. He rightly highlighted the authoritarian tendencies in certain forms of trans-activism, which seek to shut down any opposition as ‘illegitimate’ or hateful. He regularly angers certain sections of the Twittersphere by attempting to explain the gender pay gap by reference to women’s life choices. He is popular among certain young men on the internet who no doubt see him as a helpful counter to much of the gender-based madness that is thrown at them.

But we should not rush to welcome Peterson as the saviour of political thinking. Because in truth, he is an anti-political thinker. He sees political ideas as inherently dangerous. He argues that the creation of ‘belief systems’ by human beings is destructive. He treats Communism and fascism as examples of human beings distracting themselves from their suffering, a distraction which results variously in concentration camps or the Gulag. As well as rallying against the nonsense of identity politics, he also rallies against the possibility of shared belief and solidarity. Peterson’s answer to man’s misery is a religious one. Only in recognising our suffering and returning to God can we find true meaning.

This is all connected to Peterson’s deeper biological determinism. His often cited argument that compares human beings to lobsters is a case in point. For Peterson, human society is ordered into ‘dominance hierarchies’ in which we constantly jostle for supremacy over other people. These dominance hierarchies are permanent and immutable. Believing that we are able to imagine our own values, that human imagination provides the means of changing the world, only distracts us from the real nature of our position as a ‘naked ape’, doomed to replicate many of our biologically hardwired instincts, he argues.

Peterson is not the saviour of political thought or liberal ideals. He is fundamentally concerned with self-help. His arguments are therapeutic. It would be a real tragedy if his biologically determined, individualistic outlook was to prevent a generation of young people from seeking out solidarity and shared visions of the future. If Peterson is a new rock star of political thinking, it arguably shows us how low our faith in politics has sunk.